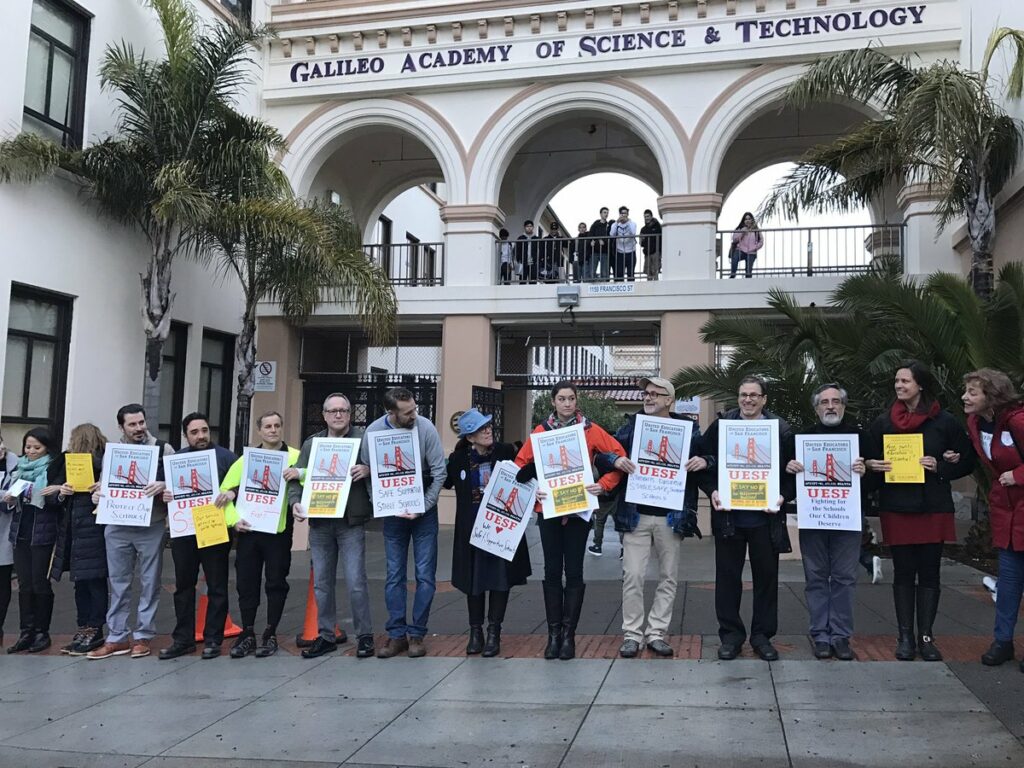 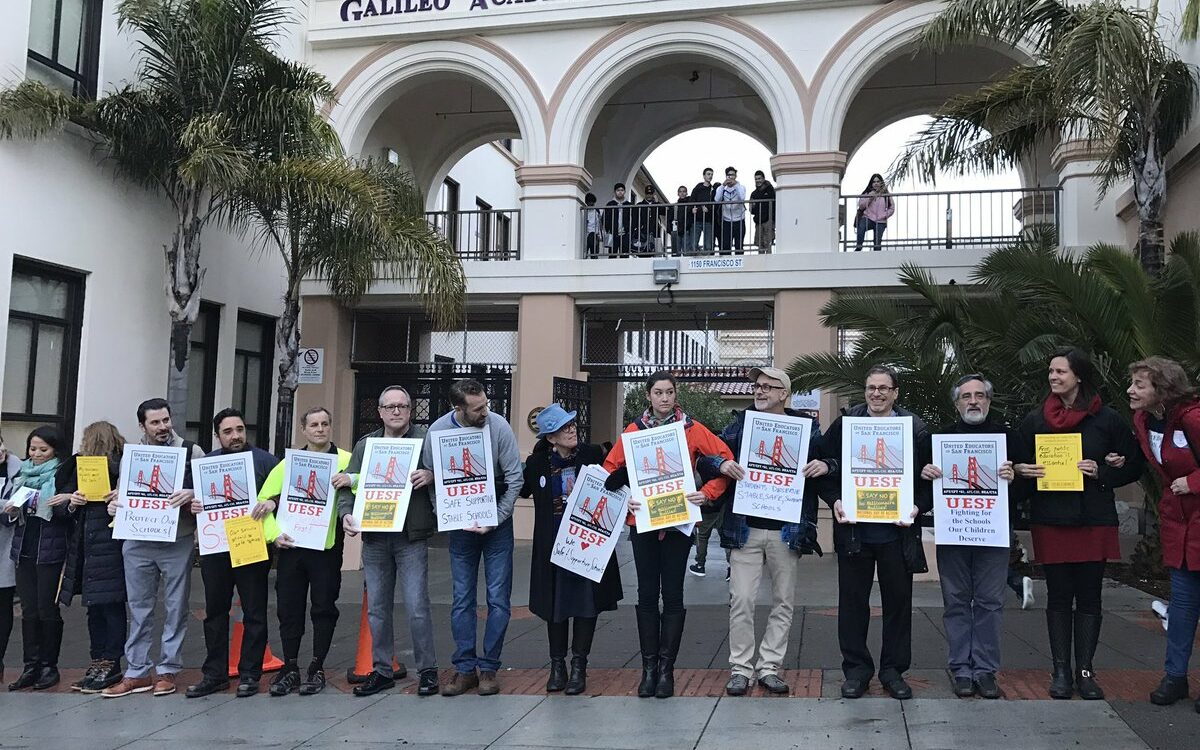 Credit: Courtesy of United Educators of San Francisco
Teachers gathered at Galileo Academy of Science and Technology in San Francisco as part of a statewide protest urging a Senate committee in Washington to reject Betsy DeVos as President-elect Donald Trump 's nominee for U.S. secretary of education.

Credit: Courtesy of United Educators of San Francisco
Teachers gathered at Galileo Academy of Science and Technology in San Francisco as part of a statewide protest urging a Senate committee in Washington to reject Betsy DeVos as President-elect Donald Trump 's nominee for U.S. secretary of education.

On the eve of President-elect Donald Trump’s inauguration, teachers unions on Thursday mounted a statewide protest involving thousands of teachers and supporters in California to “protect public schools” and to urge lawmakers in Washington to reject the nomination of billionaire Betsy DeVos, who Trump selected to become the next U.S. education secretary.

The main protest occurred at Grand View Elementary School in Los Angeles, where the leaders of major teachers unions from throughout the state and from the National Education Association joined with Steve Zimmer, school board president for the Los Angeles Unified School District, the state’s largest with about 640,000 students.

Hundreds of teachers, parents and community activists – including union leaders such as California Teachers Association President Eric Heins and NEA President Lily Eskelsen Garcia – marched along Grand View Boulevard in Los Angeles to the elementary school while singing “This Land is Your Land.”

They also carried oversized signs in the shape of shields with phrases like “Shield against immigrant detention” and “Shield against Trump/DeVos.” The signs also named foundations established by Walmart’s wealthy Walton family and billionaire philanthropist Eli Broad, who both are promoting a plan to create more charter schools in California.

“The push is on to protect schools from privatization as well as to create safe spaces for immigrants, women and minorities,” Heins said. “If they continue attacking public schools, with their bullying behavior, this won’t be the first time that we’ll do this. The bullying behavior is antithetical to California’s values.”

“The purpose of today was to stand in defense of our students and show them that we are a safe and supportive hub, and will stand up against any threats of bullying and deportations of our students from President-elect Trump,” said Carlos Mejia, executive director of the San Diego Education Association.

On Tuesday, DeVos underwent a contentious hearing on her nomination that broke along party lines before the Senate Health, Education, Labor and Pensions Committee.

At the hearing, she stated that she wouldn’t try to force states to adopt private school voucher programs like those she has promoted around the nation for several decades. Her views are especially relevant to states like California, which has a history of opposition to taxpayer-funded vouchers that could be used for tuition at private schools.

The Senate committee’s Democrats criticized DeVos on multiple fronts, ranging from her lack of experience, her attendance at private schools as a student, and the use of her family’s fortune to advance conservative candidates and causes.

“As educators, we know our responsibility is to make our schools safe havens for student learning and to prevent the corporate privatization of public education,” Heins said. “We invite community members to join us in reminding the incoming Trump administration that we will always stand up for all students.”

Many local CTA chapters followed the lead of State Superintendent of Public Instruction Tom Torlakson, who released a Dec. 21 letter encouraging all California public schools to declare themselves “safe havens” for students and to remind families about existing laws that shield students’ records from questions about immigration status.

Some of Thursday’s protestors, including some school board members, rallied in support of school districts and schools creating “safe havens” or “sanctuary schools” for undocumented, Muslim and LGBTQ students. In recent weeks, school boards across the state have approved resolutions to declare their districts safe havens, including Palo Alto Unified, Sacramento City Unified, Los Angeles Unified and San Bernardino Unified.

Before school began in Oakland on Thursday, members of the Oakland Education Association organized protests at about 40 schools.

In San Jose, teachers’ unions, school board members from Santa Clara County districts, and parent and community organizations declared Santa Clara County a safe school zone for all students and families, including those who are undocumented, Muslim and LGBTQ.

Carlos Mejia, executive director of the San Diego Education Association, said his union had about 150 protestors at 16 schools in the San Diego Unified School District.

“The purpose of today was to stand in defense of our students and show them that we are a safe and supportive hub, and will stand up against any threats of bullying and deportations of our students from President-elect Trump,” said Mejia, whose union represents 7,000 teachers, counselors, psychologists and others.

“Students start school tomorrow with a lot of uncertainty and anxiousness about what will happen in their communities,” said Matthew Hardy, a spokesman with the United Educators of San Francisco, regarding the inauguration.

“Today was a chance for teachers to send a message to the students that we have their back, and make schools feel safe with regards to immigration status, religious status, race, age and gender.”

The union collected the signatures of members of the San Francisco school district’s board of education on a letter urging Democratic Sens. Dianne Feinstein and Kamala Harris to vote against the DeVos nomination.