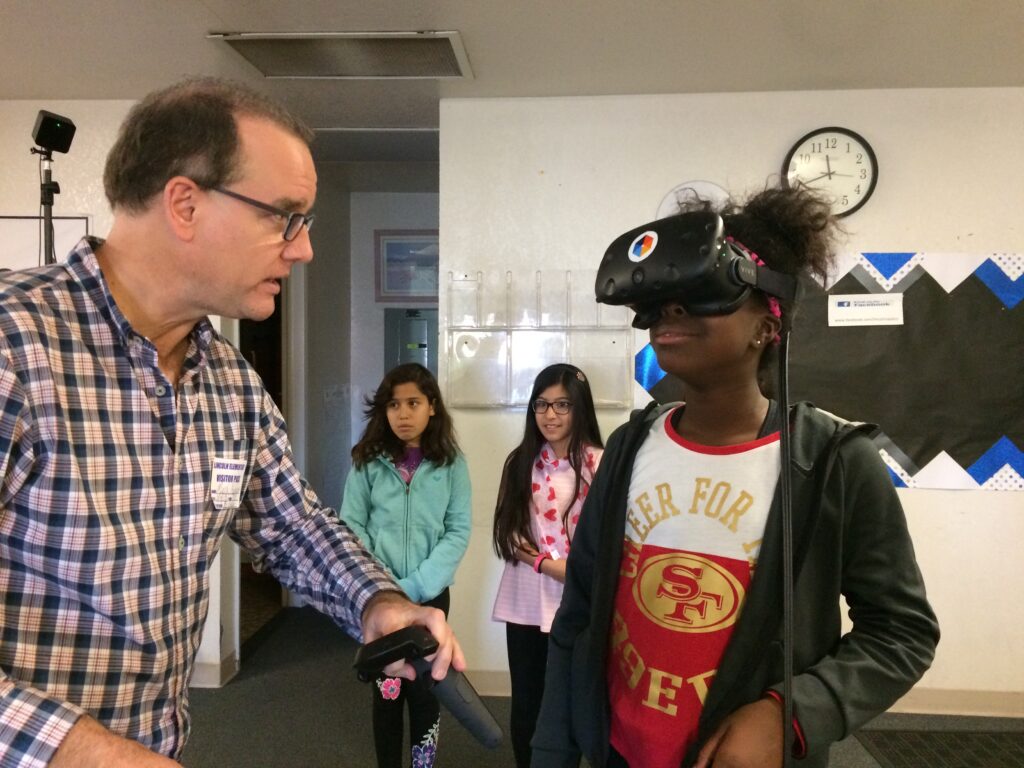 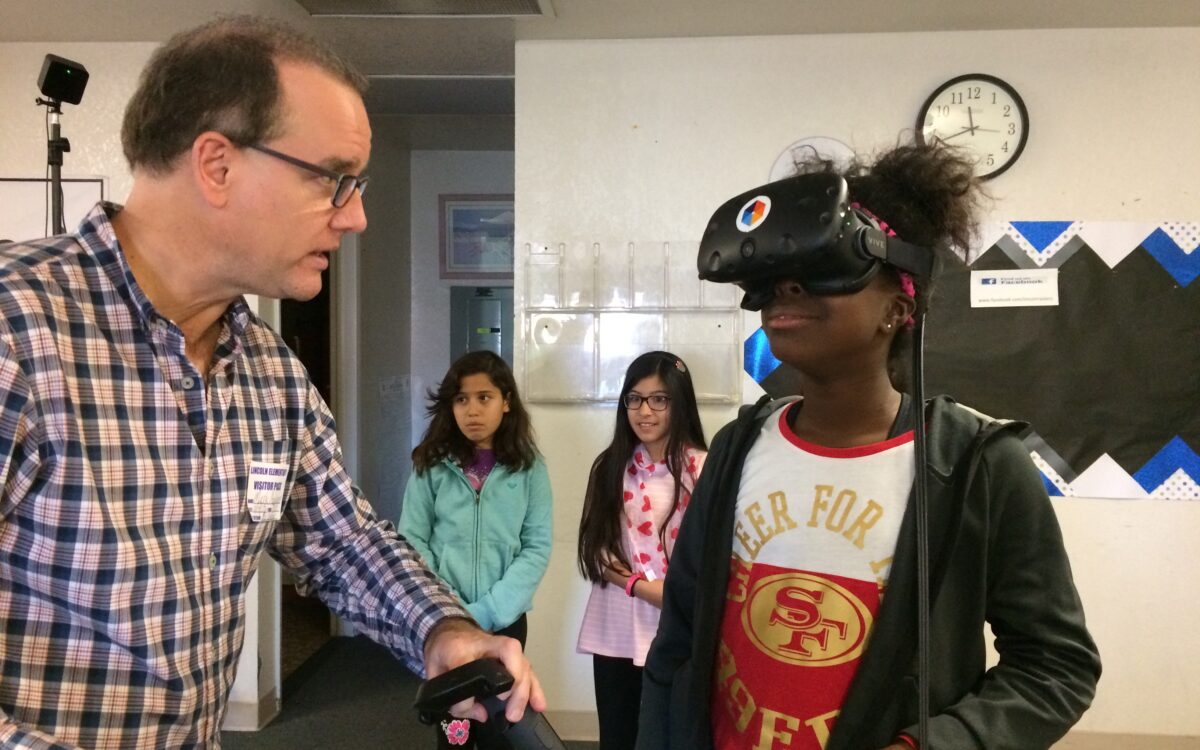 Carolyn Jones/EdSource
Jada Ikharo, a 5th grader at Lincoln Elementary in Manteca, gets a virtual reality lesson from Mark Andersen, co-founder of Lifeliqe.

Carolyn Jones/EdSource
Jada Ikharo, a 5th grader at Lincoln Elementary in Manteca, gets a virtual reality lesson from Mark Andersen, co-founder of Lifeliqe.

If you can’t afford a field trip to the International Space Station, donning a boxy black headset might be the next best thing.

To take advantage of the latest in 3-D technology, teachers are increasingly expressing interest in using virtual reality to enhance science education.

There are no firm numbers about how widely virtual reality is being used in the classroom, but teachers interviewed by EdSource believe it can be an effective way to hold the attention of students accustomed to video games and digital media, as well as provide innovative ways to learn about the natural world.

Although the equipment needed to use virtual reality technology in the classroom can be expensive, David Evans, executive director of the National Science Teachers Association, expects prices to fall and virtual reality to eventually become a staple of science classrooms.  “It’s just a matter of time,” he said. “We’re just at the very beginning of this.”

To help teachers learn how to use virtual reality, a panel at the National Science Teachers Association conference in late March will be devoted to “Virtual Reality’s Emerging Future in the Science Classroom.”

As California schools implement new science standards known as the Next Generation Science Standards, adopted by the state in 2013, some teachers are also finding that virtual reality applications are helping them introduce the standards into their classrooms, especially as software companies begin to align their products with the  standards.

“I have found this technology to be extraordinarily helpful in the classroom. Extraordinarily,” said Tammy Dunbar, a 5th-grade teacher at Lincoln Elementary in Manteca in San Joaquin County, whose students have used virtual reality as well as 3-D computer models to study science. “Is it the future? It has to be.”

In Dunbar’s class, students use a computer application called Lifeliqe (pronounced “lifelike”) that includes more than 1,000 3-D images of plants, animals and natural features like volcanoes and rivers. Using laptops provided by the district, students can click on a beetle, for example, and zoom in, turn it around, read descriptions of the wings, thorax and other parts, and even move the beetle into a science report or photograph.

A school-wide subscription to Lifeliqe costs about $5,000 annually, which allows all students at the site to use the software. That compares with the $119 annual subscription that individual consumers would pay.

Lifeliqe offered Dunbar’s class subscription for free because she teaches at a Title I school, where most students come from low-income families. Virtual reality lessons and gear were also provided for free as a trial.

Last week, Mark Andersen, the co-founder of the San Francisco-based Lifeliqe, went to Lincoln Elementary to give Dunbar’s students a virtual reality science lesson. Andersen brought a headset, controllers and other gear so each of Dunbar’s 30 students could have a five-minute opportunity to inspect a grazing dinosaur, swim along an ocean floor, wander around the inside of a plant cell, explore the International Space Station or embark on other virtual science adventures.

Julio Meza was the first to give it a try. While he moved around a prehistoric jungle, the images he viewed in the headset were broadcast on a large screen so the other students could watch.

“Oh, God, it feels weird! It’s so cool,” Julio said as he climbed a virtual palm tree. “It’s kind of scary. It’s like you’re actually there.”

Andersen asked Julio – as he asks all students – if he felt motion sickness. About 1 to 2 percent of those who try virtual reality suffer from dizziness, he said. Julio said he felt fine and continued ambling through the jungle.

“Julio, when you pet the stegosaurus, he’ll go into a defensive posture. Just so you’re not alarmed,” Andersen said. “Remember, you can fly if you want.”

Julio did just that – pet the stegosaurus, then flew around its side to look closely at the dinosaur’s scales, spiky tail and the plates on its back.

Lifeliqe is one of several companies offering virtual reality and 3-D software to schools. Nearpod, Facebook’s Oculus and Google’s Expeditions are some of the more popular platforms, used in schools around the world to provide virtual field trips to natural history museums, tours of the solar system and human bloodstream, and other science-themed experiences.

In virtual reality, users wear a headset that’s connected to a computer. Three-dimensional images are displayed on a screen inside the headset, and users can move around the virtual environment by using a controller or simply turning their heads. Some virtual reality applications are responsive, which means the environment can change based on the user’s actions. The stegosaurus will crouch when it’s pet, for example, or a door will open when the user moves his or her hands.

Virtual reality has been around at least 60 years, as the first flight simulators were used to train pilots. In recent decades it’s been used primarily in the gaming industry, but about five years ago developers started creating educational applications, such as 3-D tours of Machu Picchu, the Palace of Versailles and King Tut’s tomb. Expeditions now includes more than 400 educational options, including college and career tours.

No one formally tracks the number of schools using virtual reality, but Andersen said more than 1,000 students and teachers in California have tried Lifelique’s virtual reality app since September. Expeditions has been used by more than 1 million students around the world, and another million in Great Britain are expected to get a free trial of Expeditions this fall, according to Google spokeswoman Liz Markman.

Some of the educational software, including some by Lifeliqe, is available for free, but the gear – the headsets, earphones, routers and other equipment – can cost anywhere from $500 to more than $1,000 per set. Depending on the system a school  chooses, costs could include the price of headsets and other gear, as well as software. The Oculus Rift, one of the more popular sets, costs $599 on Amazon. Outfitting a class of 30 students with Expeditions gear would cost $10,000 at Best Buy. Some schools have been able to offset the costs through grants from private foundations or discounts from the manufacturers.

Google also has offered a less expensive, low-tech alternative: Cardboard, a virtual reality viewer made of paper and plastic that works with a cell phone, available for about $10.

Virtual reality is essentially the next step in simulation or modeling technology, both of which have been used for years in classrooms, Evans said, referring to the early flight simulator technology and images that can be manipulated on a computer. “Instead of the real thing in front of you, you have a model. There’s nothing new about that,” he said.

While virtual reality will never replace real-life field trips or science experiments, it can be a useful supplement in the classroom, Evans said, especially in schools where money for field trips is scarce and chemistry labs might be less than state-of-the-art.

“Suppose you walked into a virtual lab, and you could pour chemicals from one beaker to another, or take a tissue sample and isolate the DNA,” he said. “A combination of virtual reality and real-life science experiments could end up being a very powerful tool.”

The challenge for teachers is finding ways to incorporate the technology into science lessons, something he hopes software developers keep in mind as they create future applications, he said. Lifeliqe’s virtual reality software is designed to be used with the Next Generation Science Standards being implemented in California and 15 other states.

Later this month at Stanford University, a conference for college students called Treehacks will feature a panel on virtual reality in the classroom.  One of the Treehacks panelists, Dane Lancaster, senior director of technology at the Marin County Office of Education, said virtual reality has been especially effective among Marin’s special-education students and those in alternative schools.

At Marin’s Community School, which serves students who’ve struggled in a traditional public school setting, a recent lesson using virtual reality was immensely popular with students, he said. Like at Lincoln Elementary, students could choose from about a dozen virtual reality options, including the Viking landing on Mars, an oxygen atom, dog anatomy and structure of the earth.

“These are tough kids. It’s unusual for them – or any high-school kid, for that matter – to focus for more than 15 or 20 minutes. But when we did virtual reality, they were engaged for hours,” he said. “They were laughing, learning, paying attention. It was amazing.”

For students with physical limitations, virtual reality helped them feel what it’s like to dive into the ocean, climb a mountain or fly an airplane, he said.

“Anything’s possible,” he said. “We’re still in the early stage of this technology. It’s only going to get more incredible as time goes by.”

At West Adams High School in central Los Angeles, engineering and architecture teacher Katherine Simon just received a grant to purchase two Oculus virtual-reality sets for her students. By connecting their computerized drawings to virtual reality, the students will be able to walk through buildings they’ve designed, viewing their work in immersive 3-D.

The technology will not only help them be better designers, but will prepare them for careers in engineering and architecture because some firms now use virtual reality to showcase drawings for clients, said Simon, who worked as a civil engineer before becoming a teacher three years ago.

“It’s really exciting. The students are so creative – this really allows them to see their work in a new way,” she said. “It’s a learning process for me, too, though. The technology is so new. If this is what we’re doing now, then what’s the future? Holograms? It’s changing all the time.”

Some teachers acknowledged the irony of giving students more screen time when they probably spend too much time in front of screens already.

But Dunbar, at Lincoln Elementary, noted that this generation of students has been using computers since they were toddlers, and technology might be the best way to capture their interest.

“I know technology can be addictive, but it can be useful, too,” Dunbar said. “A lot of the kids in my class, God bless them, have not left Manteca. If I can put them in the International Space Station or let them swim with sharks for five minutes, I’m going to do it. It just breaks open their whole world.”

Fifth-grader Cristina Solis had no hesitation when she put on the virtual reality headset at Lincoln Elementary last week. She zipped from one experience to the next like she’d been doing it for years.

“I like the plant cell the best,” she said when her five minutes were up. “I love how you could walk into it and look at things. That was really cool.”

So does it make her want to be a scientist someday?