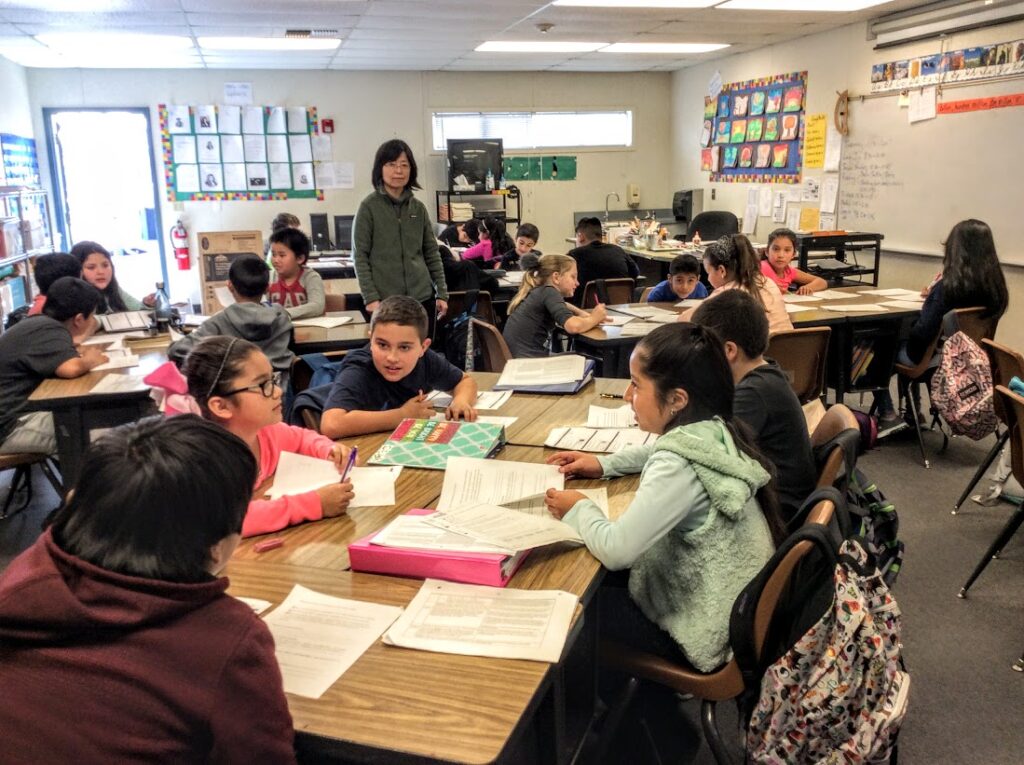 Fifth-grade math teacher Wei Zhang moves her hands in small circles with her palms up, coaxing her students to think about the math problem on the board.

“This way makes it easier to certain people,” Zhang said as she explained how to set up an equation that included both addition and multiplication using brackets. “Do you have to do it this way? No. What are the other ways you have learned?”

It’s a lesson in learning math the Common Core way – using multiple methods to come up with the right answer. The state standards require students to think critically as they solve problems – and math test scores at E.M. Grimmer Elementary School in Fremont in the San Francisco Bay Area reflect the impressive growth that students have made during the past two years.

California adopted higher standards known as Common Core in 2010, with testing over the past two years.

The state’s new data dashboard released Wednesday reveals that Grimmer’s math scores are in the highest category for every student group – including English learners, low-income students and Hispanic children. The report also shows that students in each category “increased significantly” from the previous year, with a schoolwide average increase of 19 points.

The Fremont Unified district has identified “priority standards” that every school is focusing on, Principal Judy Nye said. In addition, every school in the district has established professional learning communities at each site, which provide time for teachers to collaborate on lessons and discuss student progress.

Nye said Grimmer was one of the first schools in the district to set up a professional learning community, or PLC, three years ago, after she attended a training session about the practice, which has become a movement throughout the country as a way to improve instruction. Since then, several other staff members from Grimmer have attended trainings and the district has made them a priority.

Nye said the teacher collaboration meetings “have been the key to mostly everything.”

“In the PLC process, we’re really digging deep into the standards,” she said, explaining that teachers translated the standards into family-friendly “learning targets” so students and their parents could understand them. They used verbs to demonstrate what children should know, along with “I can” statements for students.

This strategy appears to have paid off. According to the state’s new Five by Five data reports, Grimmer was among 19 district schools – or 58 percent – that were ranked at the highest level in math, which is color-coded blue. Statewide, only 13.5 percent of schools achieved this performance level, according to an EdSource analysis of the state’s data.

“When you see the amount of growth we have made,” said Nye, “we know we’re being successful.”

In the classroom next door, teacher Liliana Leon-Franco teaches math concepts in Spanish with the help of an interactive game.

The students wrote their calculations on paper, then tapped their answers into their laptop computers and cheered, as they saw answers tallied on a screen. Fifteen students – or three-fourths of the class – got the right answer: 0.255 miles.

After seeing that five students came up with the wrong answer, Leon-Franco stopped to re-teach the concept, pointing out in Spanish the importance of placing the decimal point in the right place.

Both teachers urged their students to ask questions about concepts they didn’t understand and noted what they needed to spend more time working on.

With a student population that includes a high percentage of low-income, Latino students and English learners, Grimmer Elementary is beating state averages on Common Core standardized math test scores. Sixty-four percent of Grimmer’s students in grades 3 to 8 met or exceeded math standards in 2016, up 9 percentage points from the previous year on the state’s Smarter Balanced tests. The school far surpasses the state overall average of 37 percent.

Nye attributes the school’s success to strong relationships between teachers and students, a deep understanding of the standards, and allowing time for educators to collaborate with each other on lesson plans.

“It’s all student-based, which is key to everything we do,” she said, praising her staff for “recognizing what our students need to be successful.”

In both classes, teachers gave students a list of the Common Core State Standards they were learning and asked them to rate themselves on their understanding of “learning targets,” such as: “I can solve two-digit multiplication problems using various methods. This means I can multiply multi-digit whole numbers using the standard algorithm and partial products.”

Next to their rating between 1 and 5 (with 1 lowest and 5 highest), students showed “proof” of their understanding by writing a problem and figuring out the answer.

“I wish I knew how to do geometry and distributive properties,” said Colin Pullen, 10, who is in Zhang’s class. “Math was easy in the beginning….now it’s giving me trouble, like word problems.”

Still, he said he likes math and enjoys helping his little sister with her homework.

Students are expected to be able to write equations or draw pictures to help them figure out problems. For example, Zhang said during a meeting with Leon-Franco and the school’s special education teacher after class, none of her students was able to solve the following problem: A student buys a pencil for $0.79 each weekday for 17 weeks. How much did he spend?

Johnson Chen, 10, compared thinking about the different ways he can solve problems to figuring out riddles and brain teasers, which he enjoys.

The standards require 5th-graders to know how to add, subtract, multiply and divide decimals to hundredths, using concrete models (such as blocks) or drawings. Students must also know how to solve problems using strategies based on place value, properties for calculations (such as distributive, commutative and associative), and/or the relationship between addition and subtraction. They must also be able to relate their strategies to written calculation methods and explain their reasoning.

“The more I learn about the standards, the more I believe this is the way it should be taught,” Nye said.

These skills are expected to prepare students throughout California and the nation to work in teams to solve problems and tackle challenges in a global economy.

“We’re preparing them for tech jobs,” Nye said. “Our whole society has changed. People aren’t going to be able to be successful unless they know how to critically think.”

Student Mariel Hernandez, 10, who is in Leon-Franco’s class, said she likes math “because it will help me in my future challenges.”

“I am interested in engineering,” she said. “I could make things for the future that people could use.”

When Zhang asked students what other ways they could solve a problem besides using the distributive property, they shouted out “associative” and “commutative,” which are other math strategies that allow numbers to be rearranged, with the answer being the same regardless.

Zhang also reminded students that they could use geometry to draw a box with sections to break down each number.

“You don’t need to do it this way, but you have to understand it,” Zhang said. “You learn all these in 4th grade. But in 5th grade, our standard is to pick the way you like the best. When you grow up and work with scientists and mathematicians, if they do things differently than you – are you going to say, ‘I’m not going to work with you?’ No. You don’t have to like their ways, but you have to understand them.”

Students will be tested on their mastery of math and English language arts concepts when they take the state’s Smarter Balanced tests in May, which will include challenging word problems. Nye said she expects to see continued progress this year, based on past results.

The school has already gotten attention for its significant gains.

It is one of several campuses highlighted for two years in a row as a “Top Bay Area Public School for Underserved Students” in math by the Bay Area nonprofit Innovate Public Schools, based on its Smarter Balanced test scores for low-income and Latino students.

The school also earned a 2016 state “Gold Ribbon” award based on student achievement and its “signature practice” of providing time for teachers to collaborate on lessons, individual student progress and goals through a professional learning community. In addition, the school was named a “California Honor Roll School” in 2015 by the Educational Results Partnership and the Campaign for Business and Education Excellence, two national nonprofits working together to improve K-12 education, based on improved academic achievement and reducing achievement gaps among students from different demographic backgrounds.

Both classroom teachers meet regularly together with the special education teacher, who works with about one-third of the students who have special learning needs, to review all of their students’ work and compare notes about strengths and weaknesses. This collaboration takes place during the teachers’ prep time while students are receiving physical education, science or computer instruction from specialists.

This time together helps teachers to better understand their students and discuss specific strategies for helping them, they said. For example, after Zhang said she didn’t want students to use graph paper because some might use it as a “place holder” when figuring out how to write numbers according to their place value, special education teacher Ginger Hogue urged the teachers to continue to allow students to use it.

“My students are still learning,” she said, “so they need that.”

And after Zhang said she wasn’t sure if all her students knew the difference between “right” and “left,” due to mistakes they were making when shifting place values, Hogue pointed out a handy way to remind students: If you hold up your hands and try to form the letter “L” with your thumb and fingers, it works on the left hand.

The teachers said their students are very honest about what they know and what they don’t. Teachers set aside time to work individually with students who need extra help.

Nereida Hernandez and Marwa Ebteda, both 11, said they like math and aren’t afraid to speak up if they get stuck.

“It challenges my brain,” Nereida said. “I ask for help when I don’t understand.”

“You really get to use your brain to problem-solve,” she said. “It’s fun.”