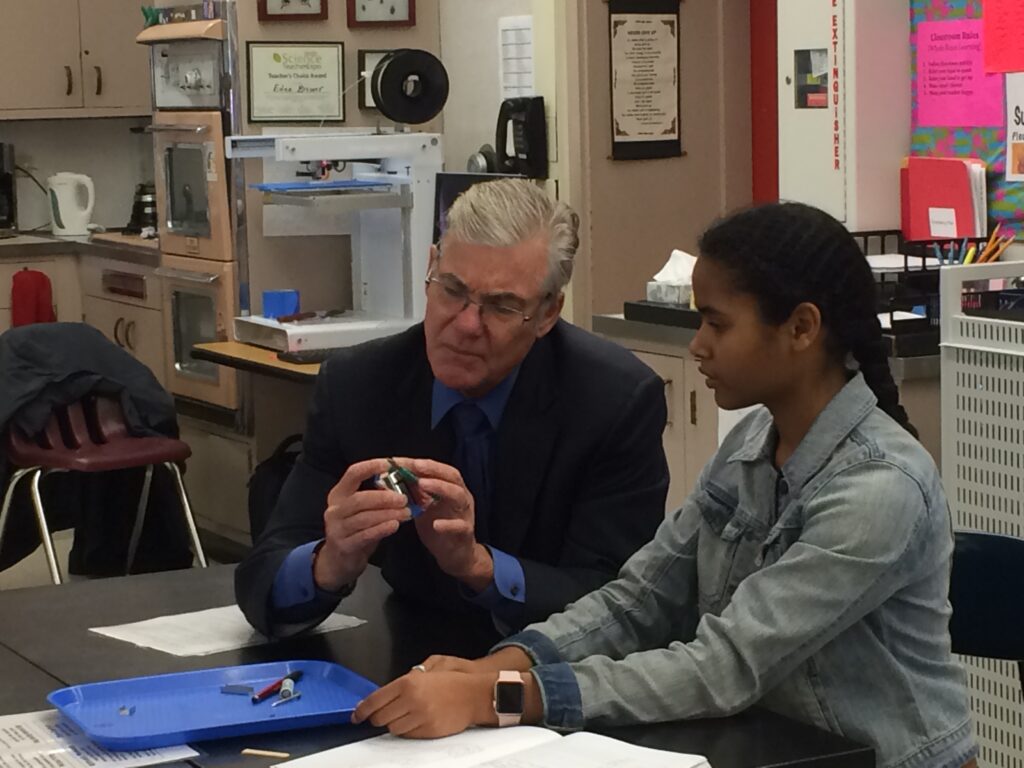 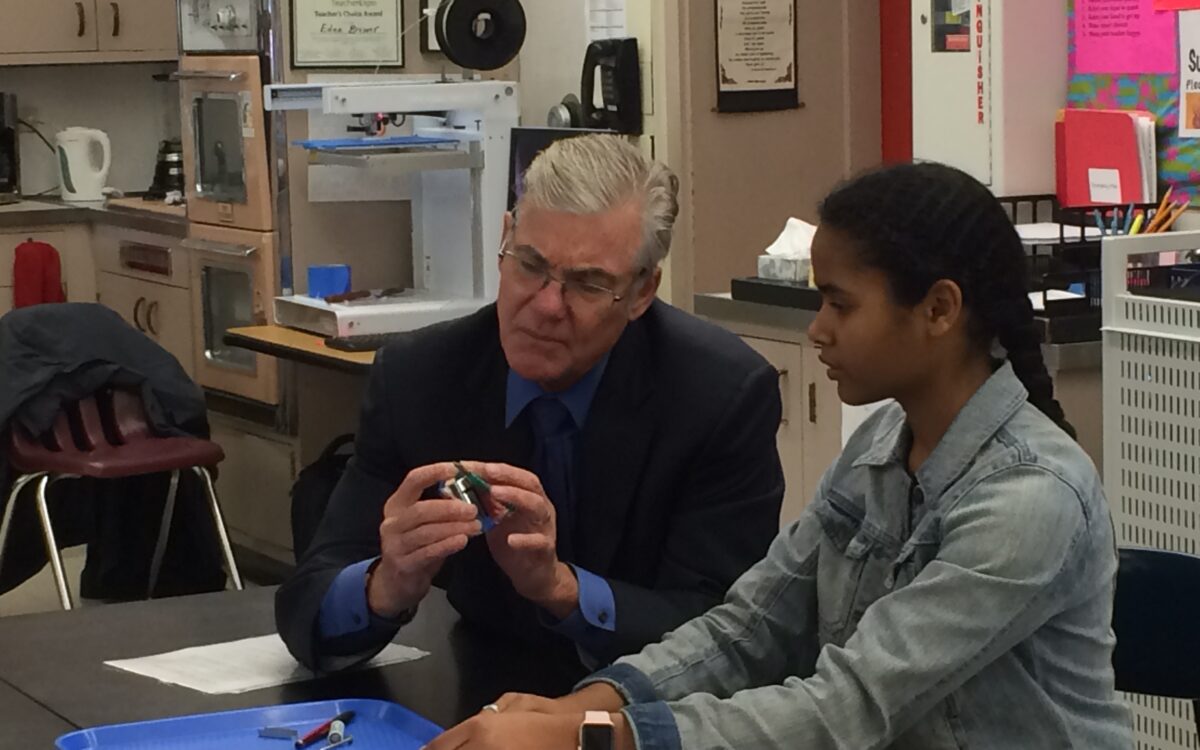 California’s new science standards were in full flower last week at a middle school in Oakland when 8th-grader Amy Zhang strung together a battery, wire and carpentry nail and marveled when not one, not two, but five paper clips jumped to the nail magnetically.

“Wow. We did it. I thought it wasn’t going to work,” she said to her classmates at Edna Brewer Middle School in Oakland Unified, one of eight districts and two charter school organizations that have been early adopters of the Next Generation Science Standards.

They are all participants in the California K-8 Next Generation Science Standards Early Implementation Initiative, a “fast start” demonstration project for the new standards adopted by California in 2013.

The paper clip experiment is an example of hands-on lessons encouraged in the new science standards, which among other things puts science experiments at the center of science education. “Engaging in the practices of science helps students understand how scientific knowledge develops; such direct involvement gives them an appreciation of the wide range of approaches that are used to investigate, model and explain the world,” according to the science framework approved by the State Board of Education this past November. The framework provides a blueprint for implementation of the new standards in the classroom.

The standards encourage students to see connections and patterns among life science, earth and space science, physical science and engineering. That’s especially the case in grades 6-8, according to California’s “preferred model” for science instruction that encourages teachers to weave together each of the three science disciplines and engineering. Historically, earth science has been taught in 6th grade, life science in 7th, and physical science in 8th.

The changes are good news for Amy and some of her classmates, who say the new style of teaching science is a lot more fun and interesting than just passively taking notes.

“This is my favorite class,” she said during a break in the paper clip experiment last week. “Instead of just sitting quietly, you can share ideas and talk with other people about what you’re doing. It’s just more fun.”

This spring, California students in 5th, 8th and a sampling of 10th through 12th grades will take pilot versions of a new test based on the science standards. Schools won’t begin assessing students with a fully operational test until spring 2019, but teachers say the early results are promising. Amy’s teacher at Edna Brewer Middle School, Jeri Johnstone, said students are more engaged, doing higher-quality work and are showing improved understanding of core scientific concepts.

“It’s a shift for teachers – when we put a worksheet in front of kids or have them copy a PowerPoint, we are doing the thinking for them,” she said. “Inquiry-based learning is deeper and longer-lasting. My advice is: Be patient. It’s more work, but it’s a lot more fun and the students’ depth of knowledge is great.”

“This is my favorite class,” said 8th-grader Amy Zhang. “Instead of just sitting quietly, you can share ideas and talk with other people about what you’re doing. It’s just more fun.”

In her classes, Johnstone’s students have pulled table cloths from under place settings to study the force of motion, launched hundreds of paper airplanes to test aerodynamics, learned about Newton’s law of inertia through skateboards, and studied pH balances by investigating why Lake Merritt smells funny on certain days.

Eighth-grade student Isabel Barragan said Johnstone’s science class has inspired her to be a doctor someday.

“I really like the hands-on part of science,” she said. “The teacher gives you an opportunity to do things yourself in this class. It’s a lot more interesting.”

WestEd is overseeing the early implementation program, which is funded by the S.D. Bechtel Jr. Foundation. Other schools across the state have also begun implementing the new standards, but those in the WestEd program will share what works and what doesn’t with other districts.

“What I’ve seen here today is fabulous. The teachers are enthusiastic, the students are fully engaged,” he said. “Obviously, Oakland has been a leader in Next Generation and showing the way. … This is what we want to see all over the state.”

The new standards incorporate the latest scientific research and are intended to boost students’ overall science performance. The standards are modeled on those of 10 countries whose students traditionally rank among the world’s best in science.

Worldwide, students in the United States ranked 25th out of 64 countries on the 2015 Program for International Student Assessment (PISA) of 15-year-olds’ scientific knowledge. Singapore had the top score, and the Dominican Republic scored last.

Within the United States, California places near the bottom, according to the most recent National Assessment of Educational Progress. California’s 4th-graders ranked third from last among the 50 states, and 8th-graders ranked fifth from last. Those figures must improve if California’s tech-centered economy is to continue to thrive, Torlakson and other advocates have said.

The new science standards will not be cheap to implement. Supplies and teacher training are two significant expenses districts will have to cover, finding money within their current budgets or raising money from parents, foundations or other sources, said Kathy DiRanna, statewide director for West Ed’s K-12 Alliance, which is helping lead the early implementation effort.

“We’re working very hard to help districts find the money and budget appropriately,” she said. “Science classes should have good equipment – real beakers instead of Solo cups. That costs money. But we’re confident that districts can do this if they budget properly.”

“They’ll have a sense of wonder,” said Barbara Woods, a district curriculum coach at the Galt Joint Union Elementary District. “Seeing those reactions is, for most of us, the whole reason we got into teaching.”

Costs will vary at the elementary, middle and high school levels, and could range from tens of thousands of dollars for a fully equipped science lab to a few hundred dollars to pay for basic materials. Johnstone said she spends at least $650 annually on supplies, about $400 of which comes out of her pocket and $250 comes from the PTA and private mini-grants.

Teacher training, especially at the elementary level, will have to be extensive and ongoing if the new standards are going to be effective, said Jessica Sawko, executive director of the California Science Teachers Association. Money for training is available through districts’ discretionary and professional development funds, as well as from grants, but districts will have to have a strong commitment to prepare their teachers, she said. Training sessions on the new standards are held several times a month throughout the state. Sessions range from a few hours to full, three-day weekends.

In the Palm Springs Unified School District, one of the eight districts in the early implementation program, the standards have been popular with students and teachers alike. So far, teachers at the middle school level have embraced the standards more than their elementary or high school counterparts, although the district expects it to catch on at all levels eventually, said Palm Springs Unified K-12 science specialist Peter A’Hearn.

Engineering projects so far seem to be the best way to ease into the new standards, he said. Constructing bridges from popsicle sticks and spaghetti is something engineering students have been doing for decades, and the concepts dovetail perfectly with the Next Generation Science Standards.

“Engineering is already such an iterative process,” said A’Hearn, who has been blogging about the transition to the new standards.

“There’s not one solution to a problem. We found this makes it a really good way to enter into the standards.”

At the Galt Joint Union Elementary District in rural Sacramento County, another of the early adopters, teachers say the transition has been mostly smooth and so far very rewarding, said Barbara Woods, a district curriculum coach who’s overseeing the new science standards.

Still, some teachers have had a tough time switching styles, she said. Science experiments can be a challenge for a teacher because often there’s no right or wrong answer. For example, in the paper clip experiment, some students may be able to lift five paper clips onto a magnetized nail, others won’t get any because the wire’s not properly connected, and others may get 20 or more because they used a stronger battery. Students might re-try the experiment a dozen times with different results, learning something new each time but not coming up with uniform answers.

“It’s different, but most teachers are really getting into it,” Woods said. “We tell teachers, students’ work may not be clear and beautiful like when they copy our notes, but students will have that ‘wow’ feeling of making their own discoveries. They’ll have a sense of wonder. Seeing those reactions is, for most of us, the whole reason we got into teaching.”

The state will begin administering pilot science assessments this spring. No scores will be released, but teachers at Edna Brewer Middle School say their students will be prepared.

“My students are already learning how to think critically and work collaboratively,” Johnstone said. “When they’re done with this class, they’ll understand that science is everywhere.”