Songs about computer coding? It's what happens when an arts school adds STEM focus 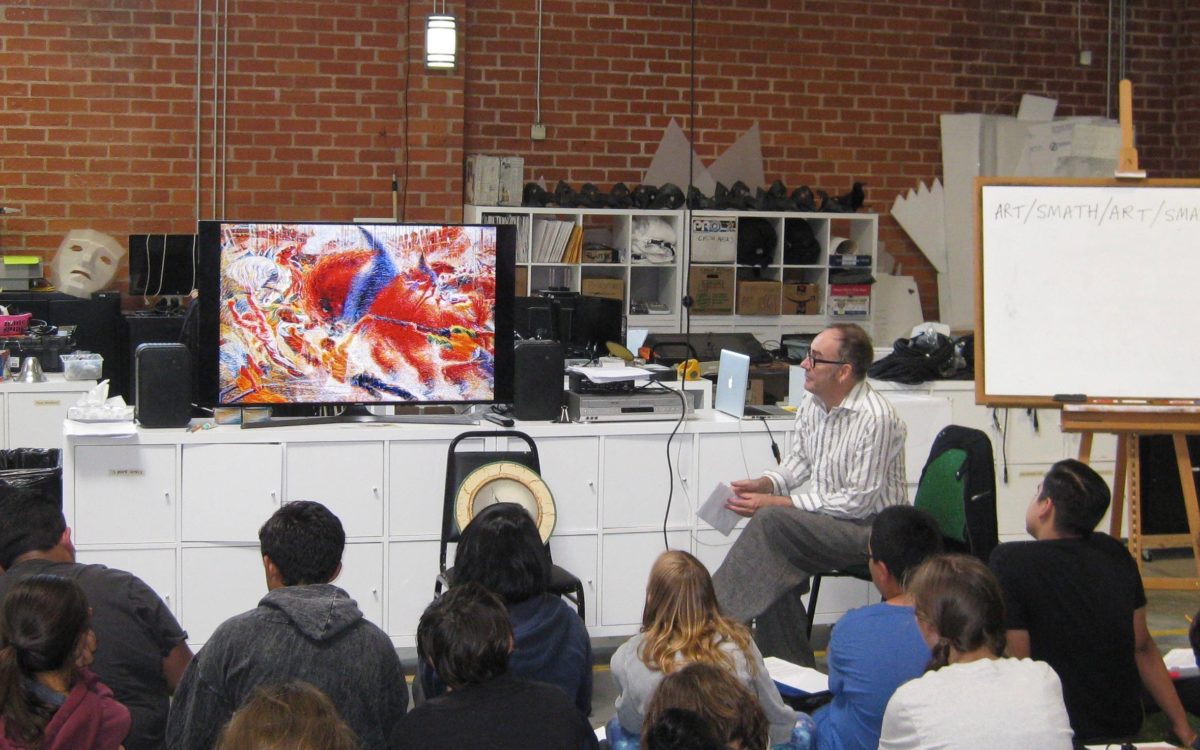 When Zane D’Amico enrolled at Renaissance Arts Academy in 2011, he expected the Los Angeles charter school to help him enhance his skills as a cellist.

What he didn’t expect was that two years later the school would adopt a STEAM (science, technology, engineering, arts and math) curriculum and he would be using engineering and math skills to build massive stages for the school’s dance, orchestra and singing performances. And he certainly didn’t anticipate joining classmates on stage to sing about the joys of computer coding.

Zane, now a senior, plans to major in computer science and hopes to attend UC Berkeley. An “A” student, he’s among the top performers in a school with a track record of preparing students for college. An average of 97 percent of its students over the past four years have been accepted at four-year universities — including MIT, Caltech, Harvard and the Juilliard School of Music.

Renaissance Arts was founded as an arts school in 2003. When a committee from the California Department of Education examined the rigor of the school’s academic programs in 2013, the group designated Renaissance a California Distinguished School and encouraged the school to adopt the STEAM school status it has held the past four years.

Most STEAM schools are STEM schools that recently added arts education. Renaissance Arts, a K-12 school with 550 students, is more successful partly because it first established an effective arts education program, said Diane Friedlaender, a senior associate at the Stanford Center for Opportunity Policy in Education at Stanford University.

“It can help strengthen students’ ability to persist because students are deciding to create something and they work at it until it’s achieved,” Friedlaender said.

Renaissance Arts has won a national STEAM award from the White House and state awards for excellence and innovation in the arts and academic achievement from the California Department of Education and commendations from the California State Assembly and the Los Angeles school district’s board of education.

Some of the honors stem from the school’s 11th grade state test results that far exceeded state averages over the past three years.

That success has generated more interest in the school. The school holds an annual lottery for admission because the applications far exceed the school’s capacity.

While Zane D’Amico was initially interested in the school because of its music education, his mother — Hind Baki — decided to enroll him at Renaissance Arts because of its academic track record.

“I’m a supporter of arts education but I wanted Zane to attend a school that has had academic success teaching many subjects,” she said.

In one area of the school — a former warehouse encompassing 47,000 square feet in northeast Los Angeles — students are learning modern dance. In another area, they are practicing violin. In other areas, they are studying math and science. There are 33 other schools that offer a STEAM curriculum in the Los Angeles school district. But what sets Renaissance Arts apart is not just its academic track record but the school’s unusual approaches to education.

For example, music and dance instruction are provided in enclosed classrooms but most of the other classes are convened in groups in open spaces, enabling teachers to confer and collaborate more easily.

Candaux and Gallegos say the groupings — partly based on student academic skill levels — enable younger students to learn from older classmates as well as teachers, give struggling students more time to master subjects and provide older students with leadership challenges and opportunities to gain a deeper understanding of topics they previously studied.

“Kids are in multi-age settings most of the time — with their families, in their neighborhoods and in church,” said Gallegos, who formerly served as the president of the teachers’ union in the neighboring Glendale school district. “Work places are also mixed-aged. The only time a society segregates by age is in schools.”

Despite their enthusiasm for multi-age settings, there have been few studies on such classrooms because so few exist, according to the Center for Evaluation & Education Policy at Indiana University. Little research is being done on them in elementary schools and those studies have been inconclusive on the effectiveness of the approach. There is even less known about the effectiveness of multi-age instruction in middle school and high school because mixed-age classrooms on those levels are even rarer.

Renaissance students say the multi-age approach works in all academic subjects. For example, Simon Landau, a senior in his seventh year at Renaissance, said he has learned from other students and helped others learn.

“If you can’t explain something to someone, you don’t really understand it,” he said. “Being an older student with mentor responsibilities prompts us to ensure we have a strong enough grasp of a subject to explain it.”

Olivia Toledo, a sophomore in her fifth year at Renaissance, recalls an experience when she was younger.

“When I started 6th grade with older students, I realized that some of the math concepts were above my head but I was introduced to them early and learned more at my own pace,” she said.

A longtime staple of Montessori schools, where there is more of a focus on social and emotional development, multi-age classrooms in the 1990s were established at some innovative elementary schools looking for ways to promote peer learning. The approach lost much of its appeal in the 2000s, when the federal No Child Left Behind law required more grade-level standardized tests.

Candaux and Gallegos said they decided to launch Renaissance Arts after failing to find suitable performing arts schools for their daughters. About 65 percent of the school’s students are from low-income families. The school’s student body is 58 percent Latino and 10 percent African-American.

Candaux said she also wanted to help provide music education for underserved students. The school provides the musical instruments and students learn to play them in group settings.

“Kids who come from economic privilege already have access to the arts and arts instruction,” Candaux said. “Woodwind instrument instruction is available in public schools because of marching bands. But most students who want to learn a string instrument must get private lessons.”

Gallegos and Candaux credit the school’s improvements in science instruction to Fabio Altenbach, who has a master’s degree in astrophysics from CalTech and they praise the math instruction of Patrick Barrow, who previously taught math to undergraduate students while pursuing a Ph.D. in math from UC Berkeley. Working together, Barrow and Altenbach have developed a curriculum that blends science and math, an approach they call “smath.”

Renaissance Arts students say the blending of arts with science, technology, engineering and math makes it easier to learn all subjects.

Project-based learning, such as show productions, is a key to success at Renaissance Arts, said Frank Heuser, head of music education at UCLA’s Department of Music. Heuser has been visiting the school frequently since 2012 and has made presentations on the school at education conferences. He said the school is also successful because it carefully manages peer learning in the multi-age classes.

“You have to watch who is helping who, monitor how they are helping each other to make sure it’s effective mentoring and you sometimes have to encourage some to mentor others,” he said. “All the awards the school has won are well deserved. Anyone who breaks a mold to create a new educational model should be applauded.”