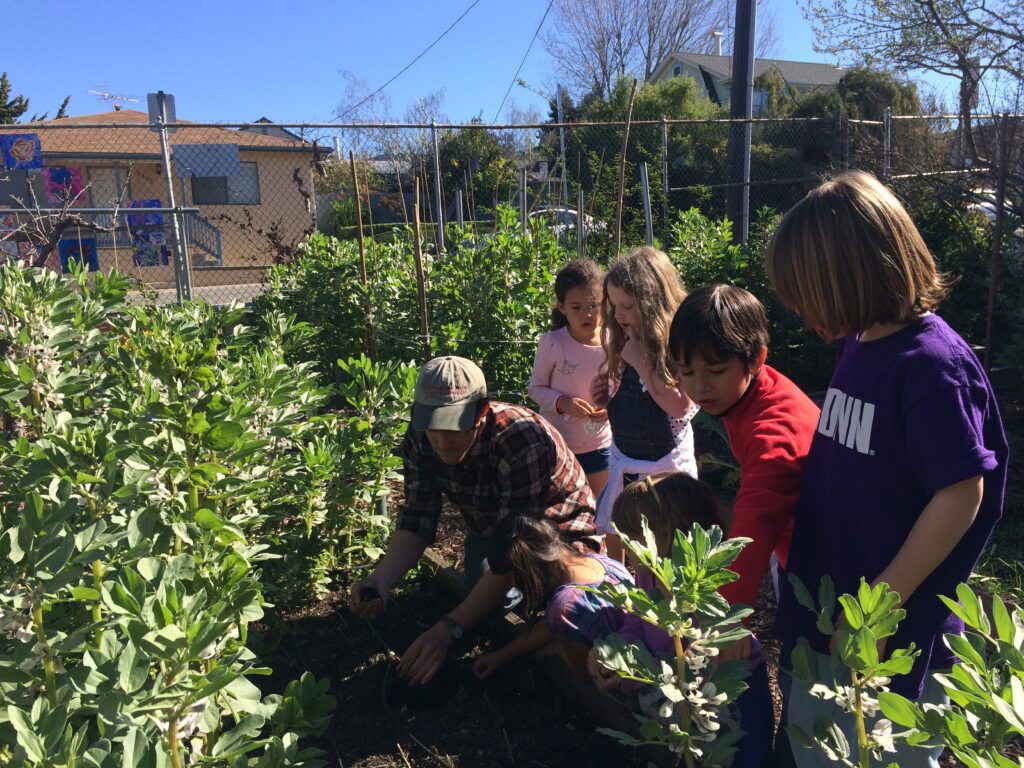 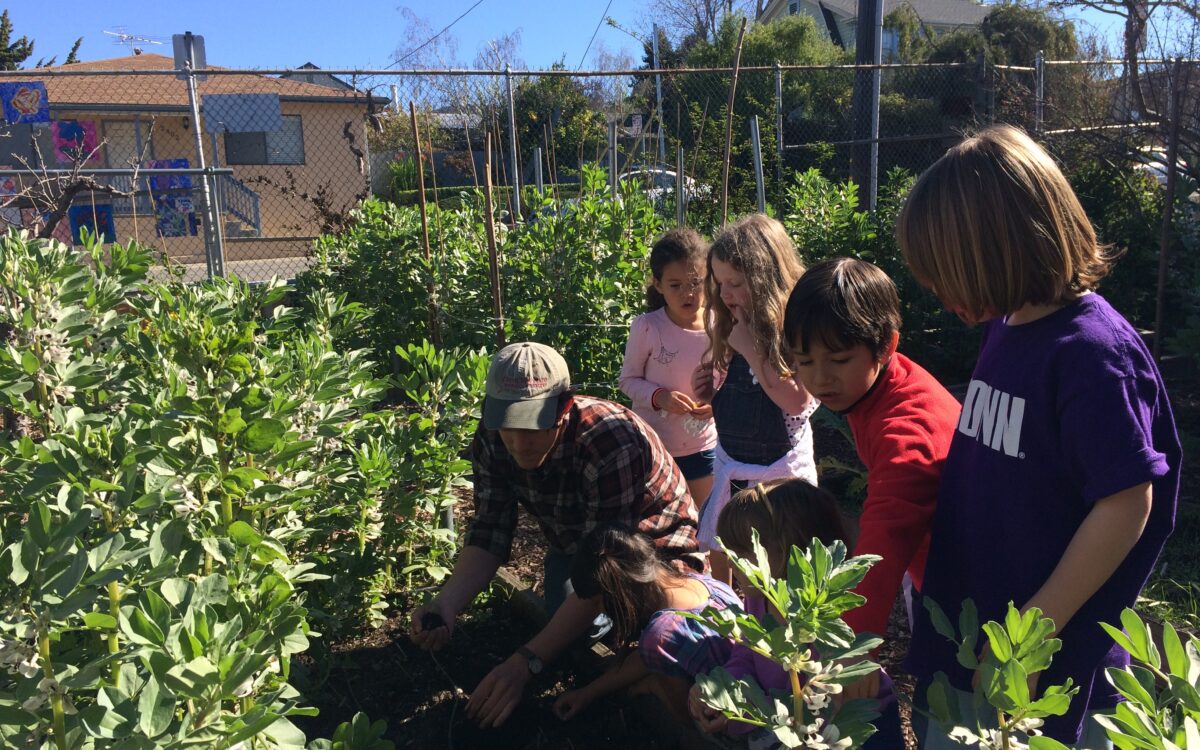 Carolyn Jones/EdSource
Sequoia Elementary School in Oakland has five gardens that teachers use for science and environmental lessons.

Carolyn Jones/EdSource
Sequoia Elementary School in Oakland has five gardens that teachers use for science and environmental lessons.

Some students in California don’t have to take field trips to parks or national forests for environmental education – they just open their classroom door.

To supplement their science and environmental curricula, hundreds of schools across the state have busted up their asphalt play yards and replaced them with wood chips, trees, flowers, shrubs and vegetables. The new gardens don’t just add greenery to the schoolyard; they help teachers implement California’s new science standards, which emphasize hands-on learning, and crossover between scientific disciplines.

The basketball and kickball courts are still there, but the rest of the school yard – in some cases an acre or more – is transformed into a park-like setting with groves of trees, pathways and flora that changes with the seasons. Students can spend recess exploring nature, and teachers can use the gardens for science and environmental education. Even when school is not in session, the gardens provide habitat for birds and insects and play a role in watershed protection.

A 2014 study by Inverness Associates, a consulting company that specializes in school sustainability, found that 68 percent of the 520 California schools that responded to a survey reported having school gardens, which includes everything from a few planters to an on-campus forest. Forty-three percent said they had school garden programs, meaning teachers had formally incorporated the gardens into the curriculum.

“School campuses in California total 130,000 acres,” said landscape architect Sharon Danks, director of Green Schoolyards America, a Berkeley-based nonprofit that helps schools design, build and use school gardens. “They’re our most well-used outdoor spaces for kids. Playing ball is great, but there’s so much more we can do with that space. Standing on the edge of 2 acres of asphalt, we need to imagine what else it can be. Why not add a forest? Some hills? Show kids where rainwater goes? There’s no reason we can’t turn that space into an outdoor classroom.”

In San Francisco Unified, 70 schools have built green schoolyards. Schools in Los Angeles Unified, Oakland Unified, Berkeley Unified and San Diego Unified, among others, have also turned their blacktops – at least partially – to greentops. Danks expects the number to grow as schools implement the state’s new science standards, which include segments on ecology, climate change and how humans impact their environment generally.

Sequoia Elementary in Oakland has five gardens on campus. All children in transitional kindergarten, kindergarten, 1st and 2nd grade spend at least an hour a week puttering in the dirt, learning about pollination, photosynthesis, root structures, soil nutrients, life cycles and other topics. Older kids become “garden ambassadors,” helping the garden teacher with weeding and pruning and generally serving as stewards.

On a recent sunny morning, a class of 1st-graders was transplanting kale and broccoli sprouts the students had grown from seeds. The teacher, Trevor Probert, showed how the roots had outgrown their pots and needed more room to grow. As the kids were putting the vegetables in the ground, some noticed how a clump of fava beans nearby was covered in aphids, and how ladybugs were eating the aphids. That prompted the students to count the ladybugs. Then they saw that bees were visiting the fava bean flowers, which led to a discussion of how bees pollinate.

In other lessons, Probert’s students have measured plants in the sun and compared them to plants in the shade, and charted the path of the sun as it affects the garden in different seasons.

“My goal is for every student to witness something they wouldn’t see if this was all blacktop,” Probert said. “I want them to understand the work that goes into a garden, the time, the energy, and the bounty they get at the end of the season. The goal is for them to develop a sense of empathy and respect for living things.”

Probert works 28 hours a week and his salary is paid in part by the school’s parents’ association. He consults with the classroom teachers to make sure his lessons fit with their science and environmental curricula, and tries to incorporate art, math, reading and writing into garden lessons, as well.

Sequoia has had gardens for at least a decade, but the program has continually expanded, said principal Donald Bertolo. Last year, the school broke up 2,500 square feet of concrete at the edge of the playground and transformed it into a creek restoration demonstration garden. Students use the garden to learn about local native plants, how watersheds work, and the importance of preserving sensitive habitats.

In other garden areas, students, parents and teachers have installed a cistern to collect rainwater, a drip irrigation system, a greenhouse, compost piles and worm bins.

Several studies have shown a link between academic achievement and school gardens. A 2009 analysis of seven studies, published in the Journal of Environmental Education, found that school gardens can help with academic performance and environmental literacy, as well as social behavior. Working in a school garden promotes teamwork, positive interactions with adults and school pride, the analysis found.

But much depends on how teachers use the school garden, said Gerald Lieberman, head of the State Education and Environment Roundtable and an author of the state’s Blueprint for Environmental Literacy.

“It’s easy to have a garden. It’s harder to have a learning garden,” he said. “Everyone loves gardening, but if teachers are just putting seeds in a pot and saying, ‘Look! They’re turning into flowers!’, that’s a missed opportunity. It’s got to connect with the classroom science standards.”

A good school garden program, he said, includes plenty of investigations and experiments. For example, students can learn about chemistry by seeing how plants grow in different types of soil. Or they can study genetics by cross breeding plants. Testing the effects of herbicides, or what happens to fertilizer runoff, can be a good way to study humans’ impact on the environment, he said.

At the Golestan Center in Berkeley, a Farsi-immersion preschool and after-school program for 3-to-13-year-olds, teachers have found the benefits of the school garden go beyond science instruction. Time in the garden has a great calming effect on students, teachers said.

Numerous studies have shown a link between nature and mental well-being, including a 2015 study by Stanford researchers that found that people who spent 90 minutes in a natural setting, as opposed to an urban setting, showed a decrease in activity in the part of the brain associated with depression.

“We wanted a play space that was dynamic and natural, the way your childhood would be if you were growing up in the country,” Atai said. “We didn’t want anything unnatural. So there’s no plastic, no asphalt.”

Instead of climbing on a play structure, kids use logs, boulders, ropes and a stack of hay bales. In the corner of the garden is a large wooden table that serves as an outdoor classroom for art projects and science experiments.

The children spend a minimum of 90 minutes a day in the yard, rain or shine, in addition to science lessons. On a recent morning, one teacher was demonstrating how aquifers work by having students shovel soil into jars and observe how fast the soil absorbed water. For another lesson on the relative size of planets, students compared a pumpkin (Jupiter) to a blueberry (Earth) to a peppercorn (the moon).

School gardens can have many benefits, but they’re not cheap. Costs range from a few hundred dollars for some raised planter boxes to $500,000 to $1 million to convert a 3-acre play yard into a park with trees, benches, pathways, flowers and wood chips, Danks said.

She advises schools to undertake the project in phases and apply for grants from utility companies, water districts, foundations or other groups. Sequoia used a grant from Stop Waste, a county recycling agency, to build their creek restoration garden. Schools can also get funding through the Urban Greening program of California’s cap-and-trade market, the state Water Resources Control Board’s drought preparedness grants, Proposition 1 stormwater grants and Proposition 84 urban greening grants, Danks said. Modernization and infrastructure bonds are also a good source of funding, she said.

“There are a lot of options. Schools can do it if they’re creative,” she said.

Maintenance can be another hurdle. School district maintenance staffs usually don’t take on garden duties. This leaves the weeding, raking and pruning – which goes on throughout the year, even during summer vacation – to volunteering parents and school staff. Golestan Center has a professional gardener come in occasionally, and Sequoia hosts parent work-days several times a year. The garden teacher spends recess weeding, often with the help of older students.

Trampled plants can be another problem. Probert has to remind students to be careful around the more delicate plants. Surrounding smaller plants with miniature fences or strings tied to small posts can help, he said.

But overall, those hassles are minimal, he said. The benefits of the gardens far outweigh the headaches.

“At the beginning of the year, the students were all afraid of spiders and wanted to step on them. But now they know that spiders are important. And as much as they still want to step on them, I see them really trying not to,” he said. “For me, that shows they’re learning to respect living things, even spiders. That means this program is a success.”