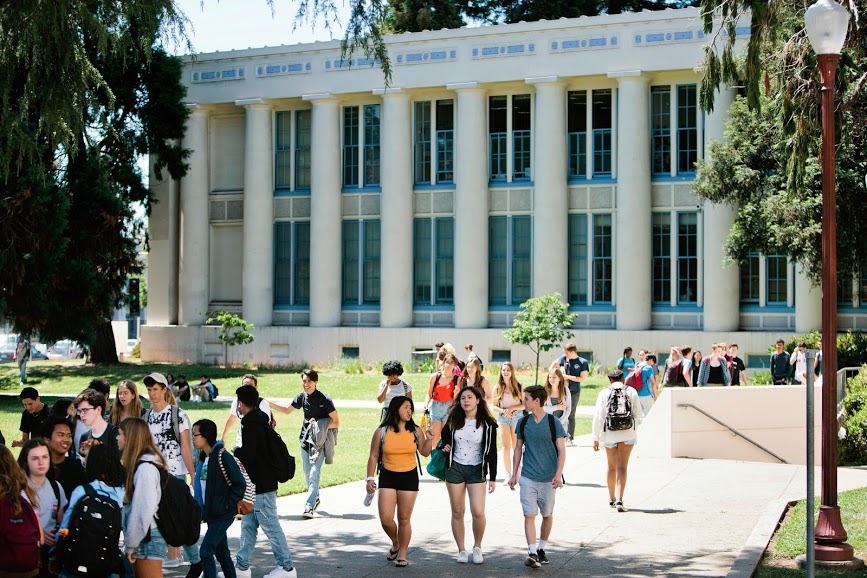 Hoping to create calmer, more peaceful atmospheres on campus, schools around the state are turning off their bell systems and letting students figure out when class starts the old-fashioned way: by looking at a clock.

“The only places that have bells any more are prisons and schools,” said Chris Calderwood, assistant principal at Rancho Mirage High School near Palm Springs. “The bottom line is, every kid has a cell phone in their pocket. They know what time it is. Why not trust the kids to manage their own time?”

Rancho Mirage High, which opened in 2013, has never used bells. In creating protocols for the new school when it opened, Calderwood and other administrators looked at a range of policies designed to teach life skills and improve campus culture. Dumping the bells was one of them.

Instead, the school uses rattles — literally an audio recording of a rattlesnake, the school mascot. The rattle is broadcast just three times: when school starts, after lunch, and at the end of the last period. The rest of the day, students look at the clock and switch classes on their own.

The purpose is to teach students how to manage their own time, and create a more relaxed campus. Students say it works.

“I’m used to it. I just check the time on my phone,” he said. “It’s good having no bells. People can keep track of their own time. I think it works pretty well.”

The school also requires students to wear lanyards showing their ID cards, and cell phones are OK in class. Students are encouraged to do research and other class-related tasks on their phones, although games and texting are still prohibited.

Overall, these changes have greatly improved the campus climate, Calderwood said. Discipline issues and tardiness are minimal, and students have learned to keep track of time on their own — a valuable skill for almost any job, he said. Indeed, students who show up late for class can get penalized.

The only hitch is that sometimes the classroom wall clock, the teacher’s watch and the students’ cell phones have different times. The cell phone time is usually the correct time. And students are good about not setting alarms on their phones, so the class doesn’t erupt in a cacophony of beeps and jingles every 50 minutes.

California schools aren’t alone in experimenting with “no bell” policies. Schools around the country are also trying the quiet approach. Most of the “no bell” schools are high schools, where students are deemed responsible enough to get to class without high-decibel reminders.

And those reminders can be highly distracting. At a typical high school with seven periods and lunch, as many as 16 bells ring daily. If there’s an early morning period, throw in an extra two bells.

“We’re all used to no-bells by now. When I go to schools that do have bells, I want to stick a fork in my eye. It’s so obnoxious,” Calderwood said. “Education can be like a monolith, big and slow to change, but when you have a chance to try something new, and it works, that’s really rewarding.”

Another newly built school, American Canyon High School near Vallejo, in the Bay area, also shut off its bell system when it opened eight years ago. American Canyon doesn’t even deploy mascot noises (in their case, a wolf howl) when school starts. There’s just silence.

“Almost nowhere do you find bells any more, not even in manufacturing,” he said. “In the adult world, you’re expected to know what time it is and be on time. That culture of independence and self-guidance and advocacy for your own time is what we’re trying to encourage here.”

Although students are still occasionally late to class, campus morale is noticeably improved, he said. He believes that’s due to the school’s overall approach to students, not just the no-bell policy. Students are entrusted to take responsibility for their own education, he said. For example, students get regular letter grades but they’re also assessed on how well they collaborate with their peers, their oral and written communication skills and how involved they are in their own learning.

“The cultural component is where you really feel the difference. You really notice it. Students tend to be very respectful of each other. There’s no tension or animosity,” he said. “And for me, personally, it’s really nice not having bells ringing in your ears all day long.”

Novato High School in Marin County put their own twist on the “no bell” idea, and created an entire school-within-a-school called the No Bells Initiative. Students in the new program, which started this fall, work on projects individually and create their own bell-less schedules with their teachers.

The principal at Justin-Siena, a Catholic high school in Napa, said tardiness has dropped 30 percent since the school dropped bells last year.

“We’re a college prep school. Well, there’s no bells in college,” said principal John Bordelon. “So just like in college, the teacher dismisses the class, not the bell. It took students about three days to get used to it. Now we’d never go back.”

At the same time the school dropped bells, it also shifted the start time to 9 a.m. and made other changes to create a “more relaxed, less stressful atmosphere,” he said.

“So much of our educational world is based on an industrial model. But students aren’t cattle,” he said. “We think students should be trusted and given responsibility for their own learning. What we’ve seen here is that it works — kids actually get to class early. I’d absolutely recommend this to any school.”