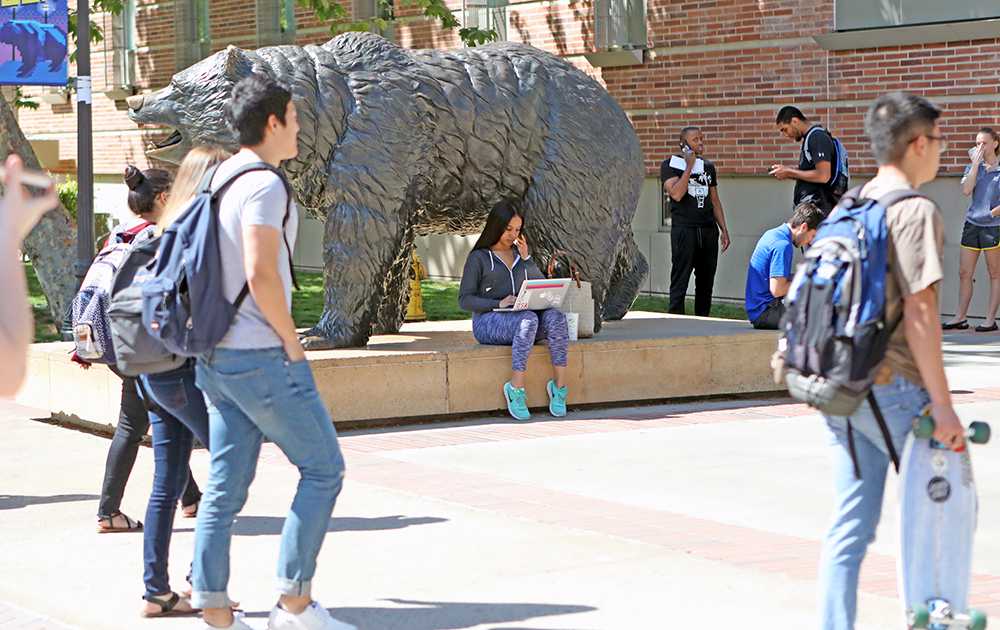 A new national report praised University of California campuses and the University of Southern California for enrolling large numbers of low-income students who receive federal Pell grants. But the study criticized many other elite schools for falling far short.

The nine UC campuses, USC and several other California colleges with selective admissions criteria surpass the recommendation that Pell grant recipients comprise at least 20 percent of their undergraduates, according to the report being released Tuesday by Georgetown University’s Center on Education and the Workforce.

Even the UC campuses with the toughest admission competition enroll far more than that suggested level: UC Berkeley, UCLA and UC San Diego show Pell ratios of 31.4 percent, 35.9 percent and 40.1 percent each, the survey noted. UC Riverside and UC Merced go as high as 57.5 percent and 61.5 percent, respectively.

Private California schools with strong rates include USC, 23.4 percent; University of San Francisco, 26 percent; Occidental College, 21.6 percent; and Pepperdine University, 21.1 percent, according to the report based on federal statistics.

The study, entitled “The 20% Solution: Selective Colleges Can Afford to Admit More Pell Grant Recipients,” says that 163 of the nation’s 500 most selective colleges and universities are below that 20 percent mark. It argues that elite schools would not suffer academically or financially if they expand their Pell numbers.

The report says that Pell students deserve more opportunities at selective, four-year colleges, where graduation rates are significantly higher than at community colleges. Getting more elite schools to reach the 20 percent enrollment goal “could go a long way toward advancing equity in this country by giving students in poor financial circumstances a far greater chance of succeeding,” it said.

Schools with high Pell percentages include, it notes, “perhaps the nation’s most respected public university, the University of California at Berkeley, and a member of the Ivy League, Columbia University (21.4 percent). If these elite public and private institutions can maintain their standing while enrolling more than 20 percent Pell Grant recipients, it suggests that other elite colleges and universities can do so, too.”

Most Pell grant recipients come from families with incomes below $30,000 a year. Their maximum Pell grant this year is $5,815, and recipients often qualify for much additional aid and loans from other sources.

The study contends that such levels can be reached without lowering admissions standards since about 150,000 Pell grant recipients scored at least 1120 on their SAT exams, which is the median for students at selective colleges. And the report strongly suggests that many elite campuses have large enough endowments and revenues to be able to afford to supplement whatever financial aid those students need beyond the Pell money.

A move to increase Pell rates has some bipartisan support in Congress. U.S. Sens. Christopher A. Coons, D-Del., and Johnny Isakson, R.-Ga., have introduced legislation that would require selective colleges to enroll more low-income students or pay a fee to remain in the federal student aid program.