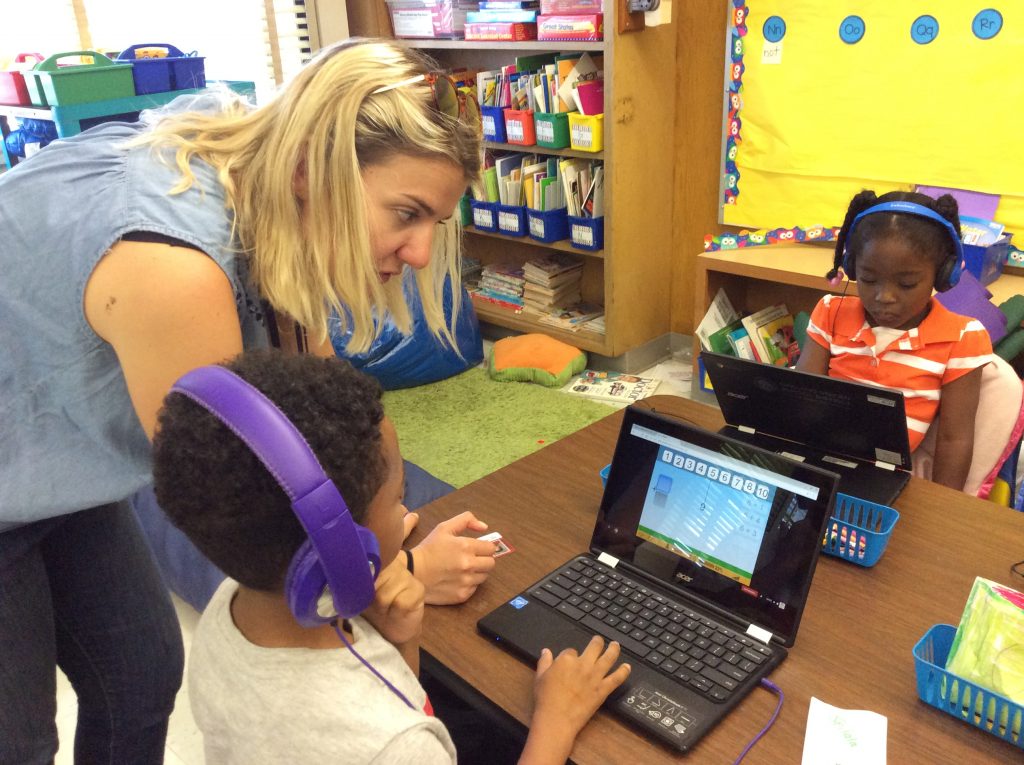 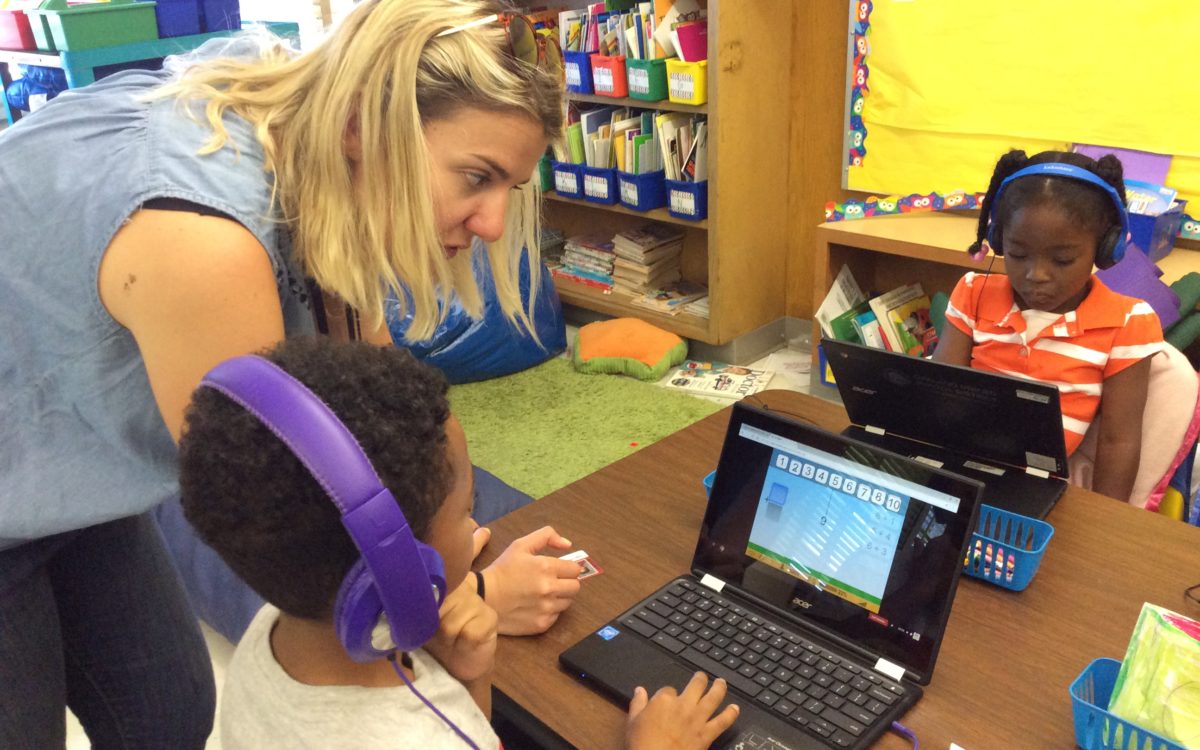 A growing number of students in Oakland Unified are learning math by playing a computer game that asks students to solve puzzles to help JiJi, an animated penguin, cross the screen.

The district expanded the program — called Spatial-Temporal Math or ST Math — to 41 of its 84 elementary, middle and high schools this year after finding that it helped students understand math concepts at 13 elementary and middle schools that began using it three years ago. It is seeking funding to add eight more schools.

“Kids are getting really excited about math,” said Robin Lovell, the district’s elementary mathematics coordinator. “When they play ST Math games, little light bulbs are going off. It makes sense and kids are able to draw connections between real world problems and what they’re playing.”

The program was designed to teach math without the use of words, symbols or numbers to students in Pre-K through Algebra I.  It introduces numbers and symbols later in the games.

ST Math is especially effective with students learning English, students with some learning disabilities and those who learn better visually.

The Oakland schools are among more than 1,300 throughout California and 3,281 in 45 states that are using the program to help students understand math concepts.

California students make up more than half of those nationwide using the program, with nearly 600,000 state students logging in each school year out of a little over 1 million throughout the country.

The program was created by MIND, formed in 1998 by three University of California researchers, based on studies showing that the brain’s spatial temporal reasoning ability allows students to learn math concepts visually.

It uses images and animation to explain basic concepts like addition and subtraction to younger students but also explains more complex concepts like Algebra to older students.

In Oakland classrooms, the program helps students in 4th grade understand that one-third is more than one-fifth by showing a whole divided into three parts, compared to five parts.

Although the software was developed before California adopted Common Core standards, new games that are aligned to the Common Core have been added, said Jason Trip, a former math teacher who trains Oakland Unified teachers in ST Math for the MIND institute. They especially reinforce “mathematical practices” standards, including sticking to a task until it is solved.

In an Allendale Elementary second-grade class in Oakland, Yuliana Suarez learned about place value by looking at pictures of flowers with petals clustered in groups of 10. She figured out that 5+4 petals in the ones column equaled 9 and that 40 + 40 petals (represented by eight clusters of 10 flowers in the tens column) equaled 80, bringing the total number of flower petals to 89.

After students solve several similar puzzles related to a concept, JiJi appears and moves up to the next game level. If students answer incorrectly, the computer shows them why their solution didn’t fit and asks them to try again. When students get stuck, a colored square appears on the screen, alerting the teacher that they need help.

Studies by MIND and district researchers, as well as by the nonprofit WestEd organization in California, show that the program has helped to improve students’ understanding of math.

In its most recent research, MIND evaluated scores of 3rd through 5th graders throughout California over three years and found that the percentage of students who met or exceeded math standards on 2015-16 Smarter Balanced tests was 5.4 percentage points higher in schools that used the program at least 90 minutes per week compared to schools that never used it. 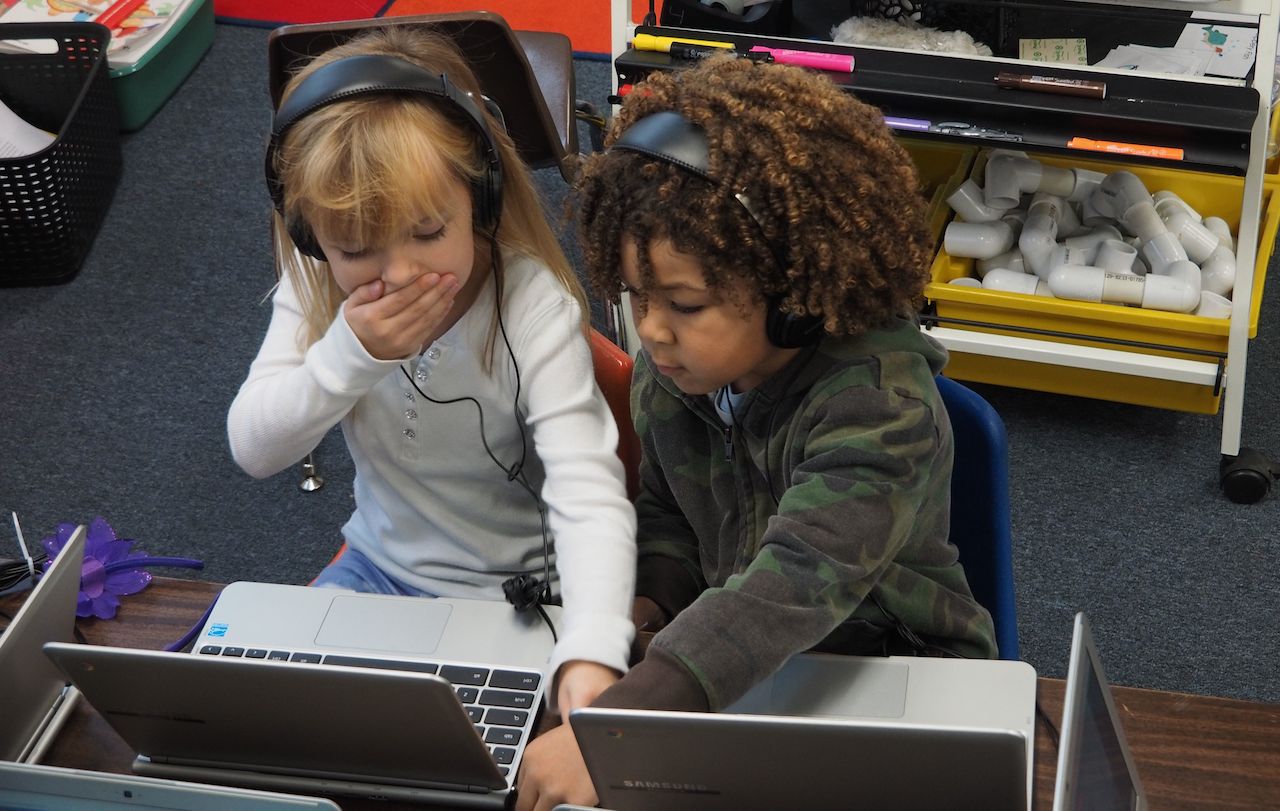 “The common thread in these schools’ outperforming similar schools is ST Math,” Coulson said, adding that this backs up similar results from previous research throughout the state and country.

The program supplements classroom instruction and is not a replacement for district curriculum. But some administrators said they need to monitor its use so teachers who are uncomfortable with math do not use it in place of teaching.

One criticism is that students can’t skip ahead if they already know the material, but must work through the program or ask a teacher to allow them to move onto the next concept. Some students said they have been frustrated by no instructions and having to start over after answering incorrectly.

MIND recommends that students use ST Math 60 to 90 minutes a week to get the maximum benefit and keep up with the math curriculum being taught, Trip said.

Several Allendale Elementary students said the program is both easy and hard.

“I was figuring it out and I hated the computer because it didn’t tell me how to do it,” said 11-year-old Isaiah Mata, after solving a puzzle that taught him about number patterns.

“It’s helped them with their problem-solving — their ability to at least try to solve puzzles on their own instead of just asking for help right away,” she said.

Many districts pay an average $26 per student per year. The Oakland district’s total costs for ST Math in 2016-17 were $648,000 for 41 schools and the nearly 12,500 students using it. A portion of the startup costs for the 21 new schools was funded by a $350,000 donation from Hyundai, as part of the car company’s effort to contribute to a skilled workforce in California. The district also received $50,000 from the Hellman Foundation and $16,000 from MIND. Next year’s renewal costs are estimated at $145,000.

Long Beach uses the program in 41 out of its 45 elementary schools serving nearly 26,000 students. The district has been especially pleased with its results for English learners and students who are deaf or hard of hearing — although it helps all students who use it consistently, said Anne Oberjuerge, the district’s K-5 math curriculum leader.

In grades K-4, 28 to 32 percent of the students were English learners this year compared to 21 percent districtwide.

“We have such a large English learner population in this district and we are working to close the achievement gap in that subgroup,” Oberjuerge said. 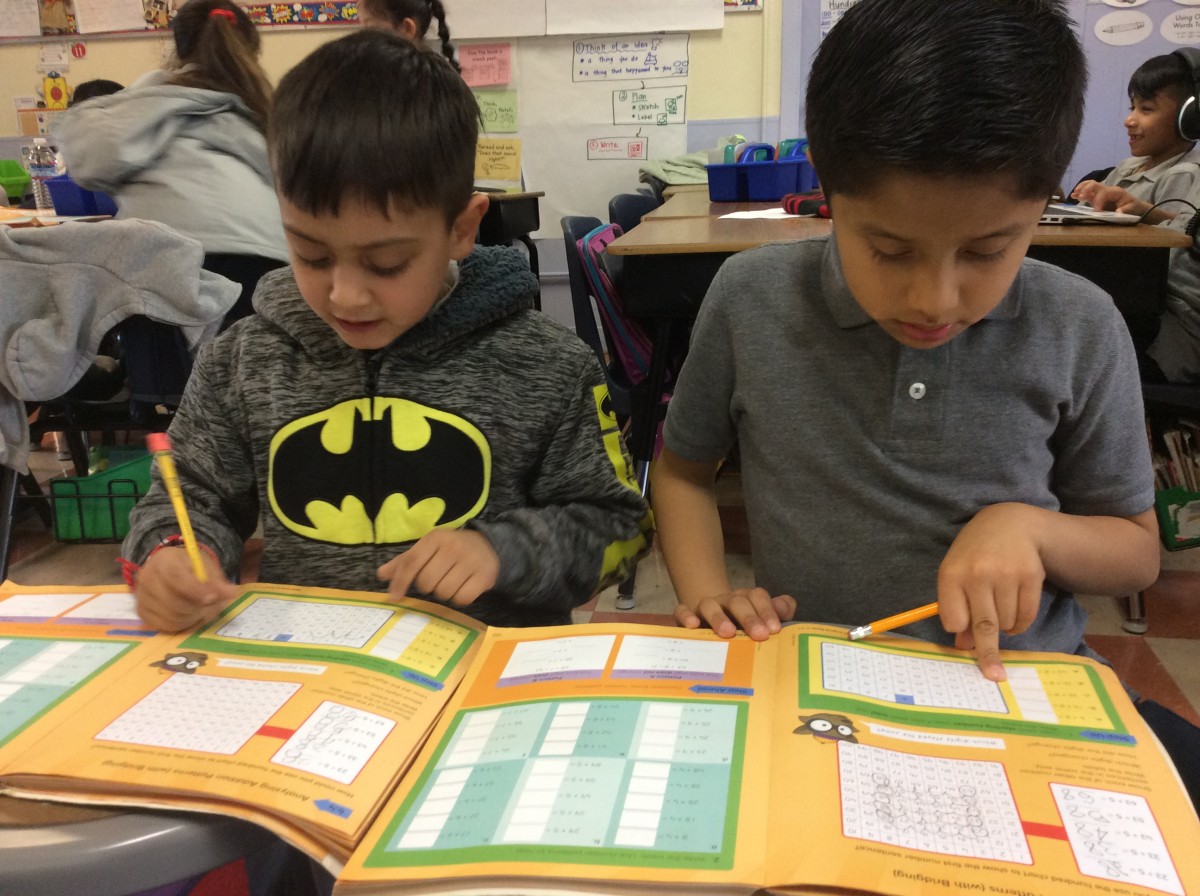 She said the district’s 2017 Smarter Balanced tests are showing gains that she attributed to a new way of “coaching” teachers in Common Core math instruction, and the increased use of ST Math districtwide. Results will be released in September.

Similarly, Santa Ana Unified is finding the program especially helps English learners who make up 40 percent of the district’s 54,500 students.

“It aligns games and activities with our curriculum,” said Nadia Hillman, the district’s executive director for elementary education.

Santa Ana expects that students who complete more than 50 percent of the program will see improvement on standardized test scores, Hillman said.

“Some of our highest-performing schools on the Smarter Balanced test are implementing ST Math with fidelity,” she said. “That, to me, is one level of data that I can point to that says it is making a difference.”

An ongoing Harvard study in Oakland has already found that that the program is making a difference, Lovell said.

“The more kids progress through the modules, the better the results,” she said. “The kids who were the furthest behind seem to benefit the most from ST Math.”

Leave a Reply to Robin Lovell