Math, science professionals say goodbye to the office park, hello to the classroom 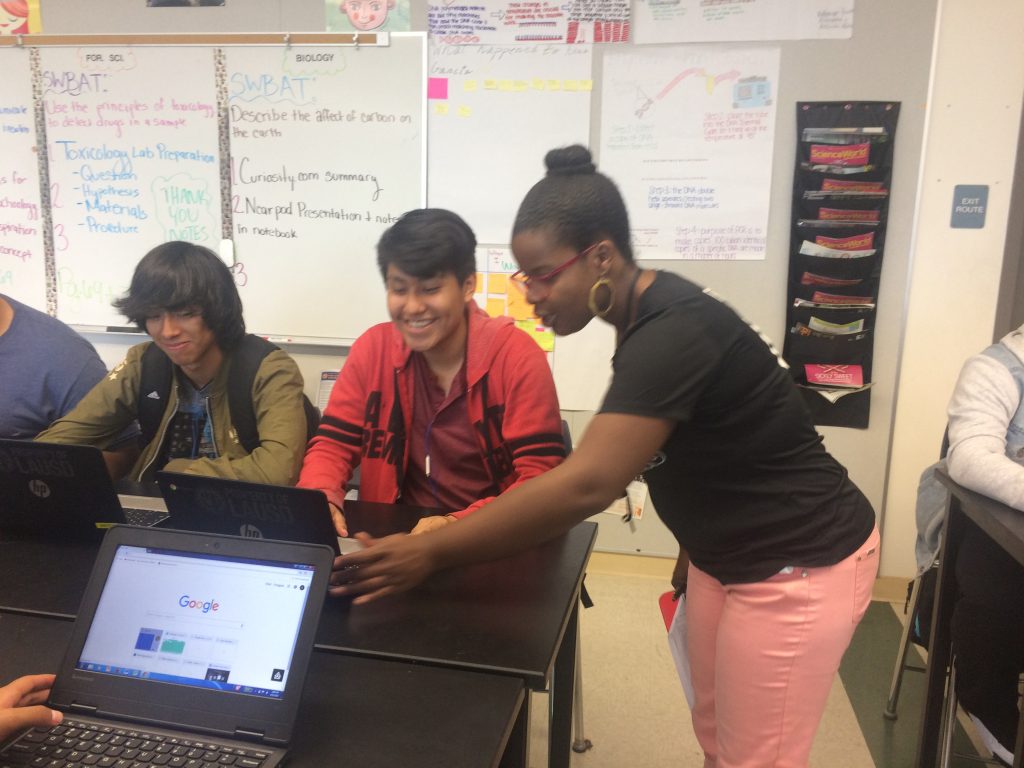 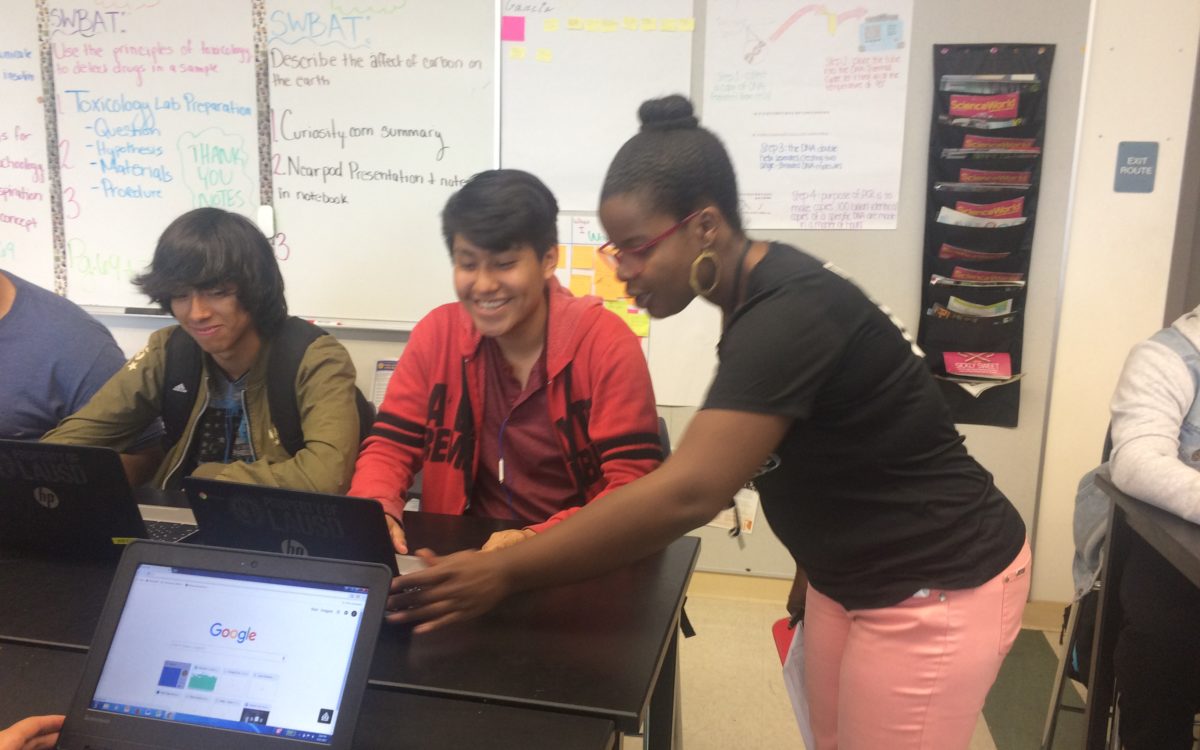 Two years ago, LaTeira Haynes was working in a quiet laboratory at UC San Diego finishing up her doctorate in biomedical engineering. Now, she’s teaching a 9th-grade biology class in South Los Angeles that is so large she uses a microphone to be heard over the constant din of teenage chatter, rustling worksheets, the zipping and unzipping of backpacks.

But to her, there is no sweeter sound.

“These students are here. They want to be here. I want to be here,” said the energetic second-year teacher, her hair pulled back and her hoop earrings flashing. “I have 47 kids in this class and 44 of them are here today. That’s huge.”

The neighborhood where Dymally High School is located has only 3.6 percent of adults age 25 or over who have a four-year college degree. That’s a long way from the seaside bluffs of La Jolla, where Haynes was studying immune cells and mulling a career in research. But Haynes said Dymally is a perfect fit for her, and teaching high school is a far more rewarding career than working in a lab.

Named a rookie-teacher-of-the-year in Los Angeles Unified last year, Haynes, 30, is among a growing number of science, technology, engineering and math professionals in California who’ve forsaken the comforts of laboratories, office parks and six-figure salaries to teach high school, often in schools with a majority of students living in poverty, learning English or facing other challenges.

“Our first class in 2007 had 10 people. This year we have 190,” said Katherine Wilcox, executive director of EnCorps, a nonprofit that helps math, science and engineering professionals become teachers by connecting them with volunteer jobs and teacher training programs. Haynes was among those trained through EnCorps. “Working in a school, with teenagers, requires a whole different mindset than what they’re used to. It can be a big challenge unless they’re well trained.”

More on California's shortage of math and science teachers 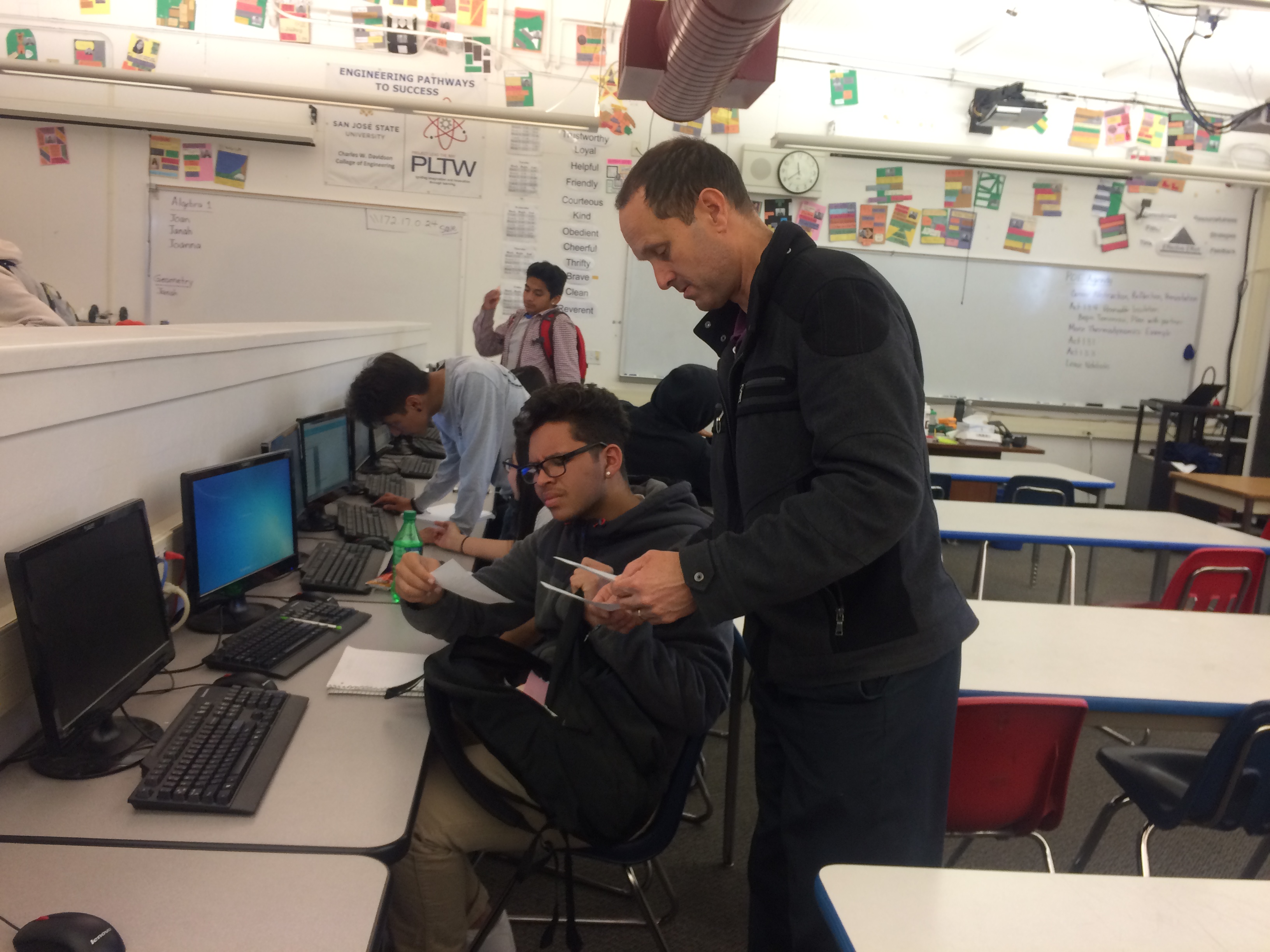 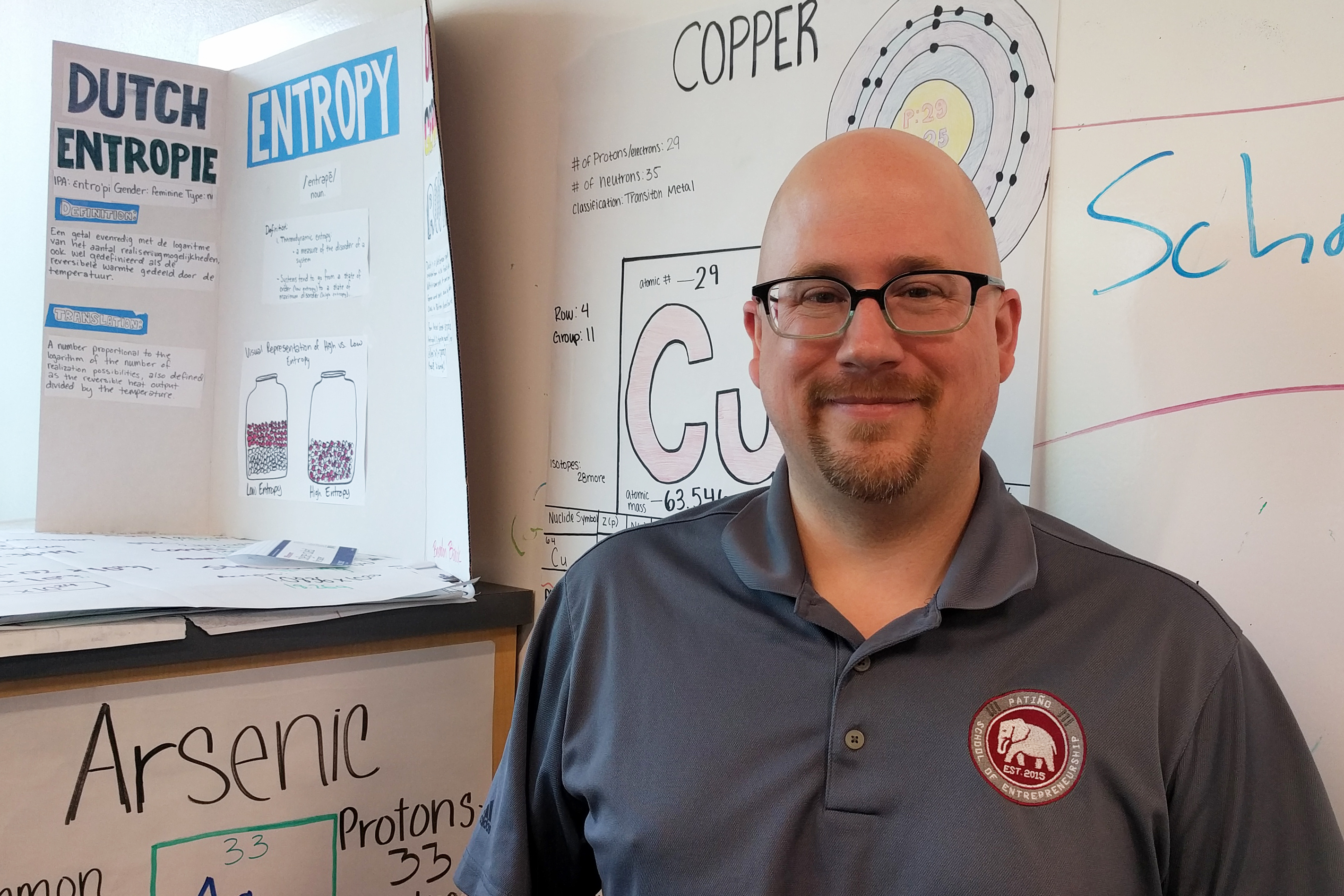 Many of these new teachers, including Haynes, have only intern credentials when they start their teaching careers. And because of an acute science and math teacher shortage, the figures are likely to grow.

California has seen an increase in recent years in teachers with provisional credentials: 10,136 for the 2015-16 school year, more than double the number issued just four years ago, according to the California Commission on Teacher Credentialing.

Traditionally, those who want to be teachers earn a bachelor’s degree and then enroll in an intern teacher credential program, which includes 12 to 18 months of classwork and student-teaching with an experienced teacher, before earning a  preliminary credential. New teachers generally earn a clear credential within five years.

Alternative routes, which are designed for people who are switching careers or are otherwise unable to take a year off work to go through a credential program, allow people to take a few short, intensive classes before becoming a salaried classroom teacher, working under an intern credential.

These teachers continue to take teacher preparation classes on weekends and over the summer, and usually work closely with mentor teachers at their school sites. Those programs usually take 18 months to two years to complete.

The shortage reflects a national trend, according to the Center for Public Education, prompting universities and the federal government to offer student loan forgiveness and reductions for students who pursue teaching math, science or special education, in high-needs schools.

While recruits from the science, math and technology industries account for a tiny share of the state’s pool of math and science teachers, they are making a difference.

Haynes had no problem adjusting to classrooms filled with teenagers. In fact, inspiring young people – especially those who are African American and Latino – is the main reason she decided to become a teacher, she said. She grew up in West Palm Beach, Fla., in a neighborhood similar to where she works now, and neither of her parents attended college. If it hadn’t been for a few teachers “always telling my mom, have her take this test! Take that test!” Haynes said she never would have become a scientist.

“I always had great teachers offering encouragement, advice, inspiration,” Haynes said. “I thought, how many more students like me are out there? We have all these scientific minds not being tapped into because students might not be pointed in that direction. One of these kids could cure cancer, solve the world’s great problems.”

Haynes said she has no regrets. Although she loves scientific research, she found laboratories a little boring. While volunteering in a local school she fell in love with high school teaching. Teaching science, she found, is a great way to blend science and the social interaction that comes from being in a high school.

And hopefully, some of her students will fall in love with science like she did, and go on to earn their doctorates, she said. Currently, just 7 percent of those who have doctorates in biological, agricultural or environmental sciences are African American or Latino, according to the National Science Foundation.

Dymally High, whose formal name is  the Academy for Multilingual Arts and Science at Mervyn M. Dymally High School, in honor of California’s first African-American lieutenant governor, opened five years ago to relieve overcrowding at a nearby school. Principal Simone Charles hopes to turn it into a science-focused school that will lead students to college and lucrative careers.

That goal may be a long way off: The school has only three science teachers for 703 students. Charles said it needs 10. Few students meet state math and English proficiency standards, and the 2014-15 dropout rate, the most recent available, was 21 percent, twice the state average.

But science is a bright spot.  Twenty-three percent of Dymally’s 10th-graders scored “advanced” or “proficient” on the state’s standardized science test in 2015-16, below the state average but far better than the students did on math or English tests.

And, perhaps the greatest achievement, 8 percent of Dymally’s students were enrolled in an AP science class in 2015-16, compared to 5 percent statewide. The graduation rate was up 10 percentage points – from 75 percent in 2015-16 to an anticipated 85 percent this year, and attendance is up 10 percent – feats at least partly attributable to Haynes, Charles said. 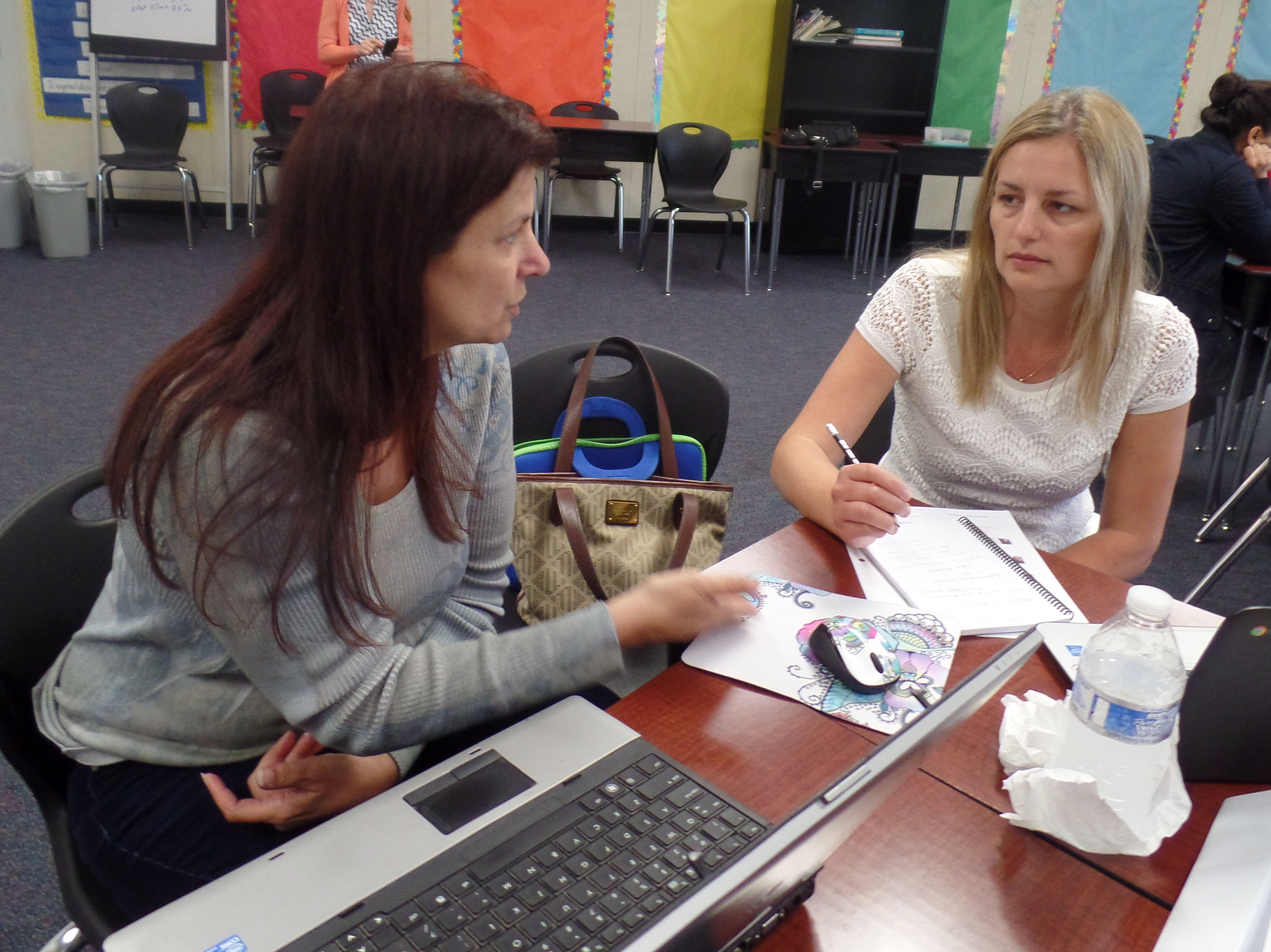 California programs to entice would-be teachers to the classroom

“Dr. Haynes is a huge blessing,” said Charles, herself a former teacher-of-the-year. “Her energy, her knowledge, her willingness to work with students, especially those who are more of a challenge… She’s the reason kids are here. People think of athletes as role models. Well, here we have an African-American woman scientist as a role model. She shows what can be accomplished by people who look like her.”

One of Haynes’ students, Seleste Murillo, a sophomore whose parents did not attend college, credited Haynes with helping her win a $20,000 college scholarship.

“Dr. Haynes tries to help us any way she can. She’s like a parent,” Seleste said during a break from classes. “She’s always encouraging us, which makes us want to do better. … She gave me a letter of rec for the scholarship that said I was a good leader and loyal to my friends. That letter made me cry, I was so happy.”

On a sunny day in late April, Haynes devoted her day teaching several classes of 9th-graders about greenhouse gasses. Wearing peach-colored jeans and a black “Dymally Challengers” T-shirt, she swooped around the classroom with her microphone, explaining how burning fossil fuels releases carbon dioxide, and too much carbon dioxide heats up the planet.

Students were in varying states of paying attention.

“If humans continue to release carbon dioxide into the atmosphere, what do you believe will happen?” she asked at one point.

“We’ll die!” one student cried out, sparking much laughter in the classroom.

“Why? Tell me why you think that,” she said.

“Think of a layer of carbon dioxide being like glass. Imagine the world covered in it, covered in glass. Like a car parked in the sun. What happens?”

Another student typed something into the laptop, which Haynes could read on her tablet. She read it aloud:

“‘It will heat up too much and the air will be trapped, destroying environments and choking us with heat.’ Yes! Great job, everyone! You’re making me proud and hopeful for the future. Your generation is going to solve these problems.”

Later, she had students read science articles from curiosity.com. Some were not happy about that.

“Every day? We have to do this every day?” one girl asked.

“Yes, ma’m,” Haynes said. “You think it’s too hard? Well, it’s just teaching you to rise to the occasion.”

For a moment, silence settled on the class. Haynes put down her microphone for the first time all morning. She didn’t need it: the students were reading science articles.

Tomorrow: Fresno tackles its shortage of math and science teachers