Larger tragedy averted, but Rancho Tehama must be a call to action 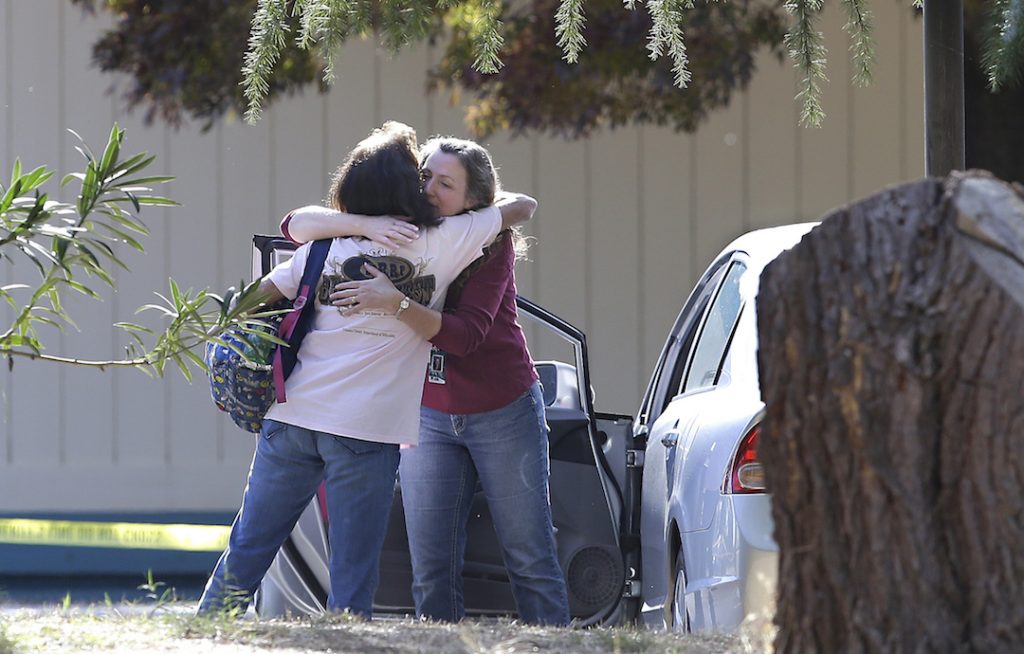 Because of a quick response from teachers and other staff to a gunman on a shooting rampage, an unimaginable tragedy at a California school was averted yesterday.

In an instant, Rancho Tehama Elementary, with an enrollment of just over 100 children in a tiny rural community north of Sacramento, could have joined the list of school-site massacres alongside Columbine and Sandy Hook, which are branded into the national consciousness.

But remarkably, teachers were able to move children from the playground into the school and lock the doors when they heard shots being fired. So instead of getting into the school, the shooter sprayed the school with what appears to have been a semi-automatic rifle, with bullets penetrating school walls and windows.

“It is monumental that that school went on lockdown,” Assistant Sheriff Phil Johnston said.“I really, truly believe that we would have had a horrific bloodbath in that school if that school hadn’t taken the action when they did.”

At a minimum, the school set an example for how to respond in the event of an emergency like yesterday’s. State law requires all public schools in California to have safety plans in place, and for those plans to be updated annually. What happened in Rancho Tehama shows that these plans can be useful.

But not all schools will have enough advance warning to protect students, which is why Rancho Tehama should be a call to action, not a reason to express relief that not more children were killed, and move on.

There was still an unnecessary loss of life in the community. The gunman killed five people, including a parent taking her child to school, before sheriff’s deputies shot him to death. A 6-year-old student inside the school was injured by a bullet that penetrated a classroom wall. As for the children and staff trapped in the school, many will be traumatized, casting a shadow over their sense of safety and security for years to come.

Each time these massacres have occurred we have weighed in on the need for our political leaders to do more. While EdSource typically does not take positions on issues, we have also noted the daily incidents of deaths of young people in our cities due to gun violence that are barely noticed, but inflict permanent damage on survivors and friends, in addition to the incalculable loss of another young person before they have even reached adulthood. Some have occurred directly outside our offices in downtown Oakland.

How many people outside of Stockton recall the 1989 massacre at Cleveland Elementary School there when five children were killed in the school’s playground?  How many even remember the shooting in a San Bernardino school just six months ago when a teacher and an 8-year- old student in her classroom were killed?

The shrine in downtown Oakland at the spot where 17-year-old Regina Jefferies was caught in a crossfire of bullets in June last year have long disappeared. But her killers have never been caught. The pain for her family and friends endures.

An EdSource survey this fall showed that the number one priority for parents — and Californians in general — when it comes to schools is providing a “safe and positive” school environment, far outranking getting high scores on standardized tests.

Any sense of safety that children and their parents in Rancho Tehama might have felt before yesterday has been shattered. What will it take to restore it?

California has thankfully done more than any other state. In fact, it leads the nation in this regard. Among numerous actions, it has banned most assault rifles, limits the number of handguns a person can purchase to one per month, imposes a 10-day waiting period before the sale or transfer of a firearm, and requires all sales to be processed through a licensed gun dealer, which requires a background check. Just last year, voters approved Prop. 63, the “Safety for All Initiative” prohibiting the sale of large-capacity ammunition magazines, among other measures.

But state lawmakers must continue to explore other ways protect children and schools. Lethal weapons are still too readily available to people who should not have them in the first place.

What is also clear is that a national response is needed, in addition to whatever California does.

“No single law, no set of laws can eliminate evil from the world or prevent every senseless act of violence in our society, but that can’t be an excuse for inaction,” then-President Barack Obama said after the Sandy Hook killings in Newtown, Conn., in 2012. “Surely we can do better than this.”

If anything, as a nation we have since then drifted even further away from taking on gun violence as a national emergency.

Clearly more must be done to tackle mental illness and domestic violence, which are common threads in many of these killings. But that cannot be used as an excuse to do nothing to regulate assault-style weapons. The arsenal of weapons in the possession of the shooter who killed 58 people at a music festival in Las Vegas a month ago proved that point.

School shootings are thankfully rare. But we must not forget Rancho Tehama, a community that few Californians have heard of, let alone visited. It reminds us that as a state and nation we must do much more to protect our children.