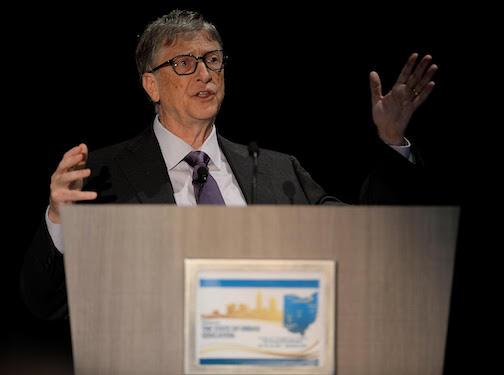 In a significant shift in strategy, the Bill and Melinda Gates Foundation, the nation’s largest charitable foundation, will invest the biggest share of its education philanthropy dollars over the next five years to support networks of teachers, schools and districts that come up with their own “locally driven solutions” to improving student achievement.

That strategy was outlined yesterday by Bill Gates himself at the annual conference Thursday of the Council of the Great City Schools in Cleveland.

His remarks were noteworthy because the Gates Foundation has arguably exerted a greater influence over education policy and practice in the United States than any other foundation in recent years, not only because of its level of spending, but because of several targeted and in some cases controversial initiatives.

The approach Gates outlined  resonates with the major thrust of education reform on a national level which is moving away from the top-down reforms like the No Child Left Behind law to ones driven by states and local school districts.

Gates notably declared an end to the foundation’s years-long efforts to expand the way teachers are evaluated.  Those efforts aimed to base evaluations on multiple measures, including most controversially the test scores of their students.

“We will no longer invest directly in new initiatives based on teacher evaluations and ratings,” Gates said.

Instead, Gates said more than 60 percent of an estimated of $1.7 billion his foundation will spend on K-12 education over the next five years will go to support networks of teachers, schools and districts, along with investing in curricula and professional development.

“We think this will lead to more impactful, and more durable systemic changes, which with any luck will be attractive enough to be widely adopted by other schools,” he said.  “Other than an approach of continuous improvement, we will let people come to us with the set of approaches they think will work for them in their local context.”

The foundation would initially focus on high-needs schools and districts in six to eight states, but Gates did not specify which ones.

“We will be fascinated to see what innovations will emerge,” he said. “Part of the beauty is that some will be ones that we don’t expect.”

Among those he cited as models for what the foundation had in mind are the CORE Districts in California, which include some of the state’s largest: Los Angeles Unified, Long Beach Unified and Fresno Unified. The districts have collaborated on a range of issues, including sharing data and devising new school and student accountability measures.

Another 25 percent of the foundation’s education grants will be spent on what Gates called “big bets — innovations with the potential to change the trajectory of public education over the next 10 to 15 years.”

The remaining 15 percent will be spent on charter schools, with an emphasis on those committed to serving students with special needs — those, Gates said, “with mild to moderate learning and behavioral disabilities.”

“We will partner with the charters who really want to up their game substantially (on working with special needs children), and are trying out new approaches,” he said.

In a frank assessment of the foundation’s contributions, as well as the shortcomings in its education investments, Gates reviewed the major initiatives the foundation has spearheaded over the past 17 years.

Beginning around 2000, the foundation was most closely identified with its promotion of small schools, often breaking up large comprehensive high schools into smaller “schools within schools.” Several school districts in California, including Oakland Unified, were major recipients of Gates’ support in this arena.

Gates said that while the small schools initiative produced some significant improvements in some districts, “the prospects for having a super large impact was limited.”

“We were never going to get beyond 10 percent of the student body,” he said. “Our goal was to help the majority of students.”

He similarly described the limitations of the foundation’s Measuring Effective Teaching Initiative. Some good ideas emerged, such as the idea of videotaping lessons and sharing those with other teachers and surveys to determine the impact of teaching strategies on students themselves.

The challenge, he said, is that even in districts where this approach worked well, such as Chicago, New York City and Washington D.C., “it is not enough to get the full results we want.” Teacher evaluation, he noted, is just “one important piece of several critical elements to drive student achievement.”

Regarding the Common Core, he suggested that standards now have “gotten wide adoption,” along with curriculum materials and teacher training aligned with the standards. “All those things continue to grow,” he said. The foundation would continue to support implementation of the standards, but he implied that other broader strategies were needed as well.

Gates singled out math for special attention. “Math is a particular area where we want to have more information about what works,” he said. In particular, the challenge students have in mastering algebra “puts kids’ self image into a negative mode,” which in turn affects their entire academic trajectories, he said.

“We’d like to make this (mastery of algebra) achievable and enjoyable for all kids,” he said.

Gates also made it clear that despite ongoing support for charter schools  his top priority is to have an impact on that part of the education system attended by most students — regular public schools — and especially, as he put it,  to ensure  that “low income students and students of color … have equal access to a great public education that prepares them for adulthood.”

“We will not give up until this has been achieved,” he said.