Hundreds protest in Oakland against Trump's nominee for education secretary 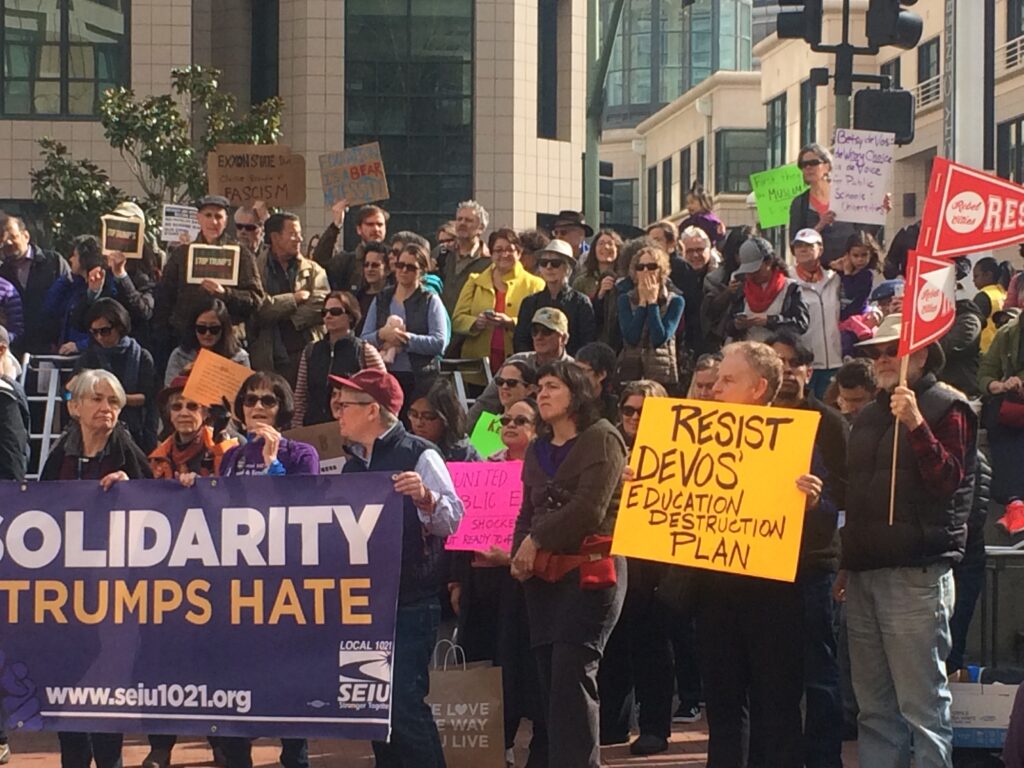 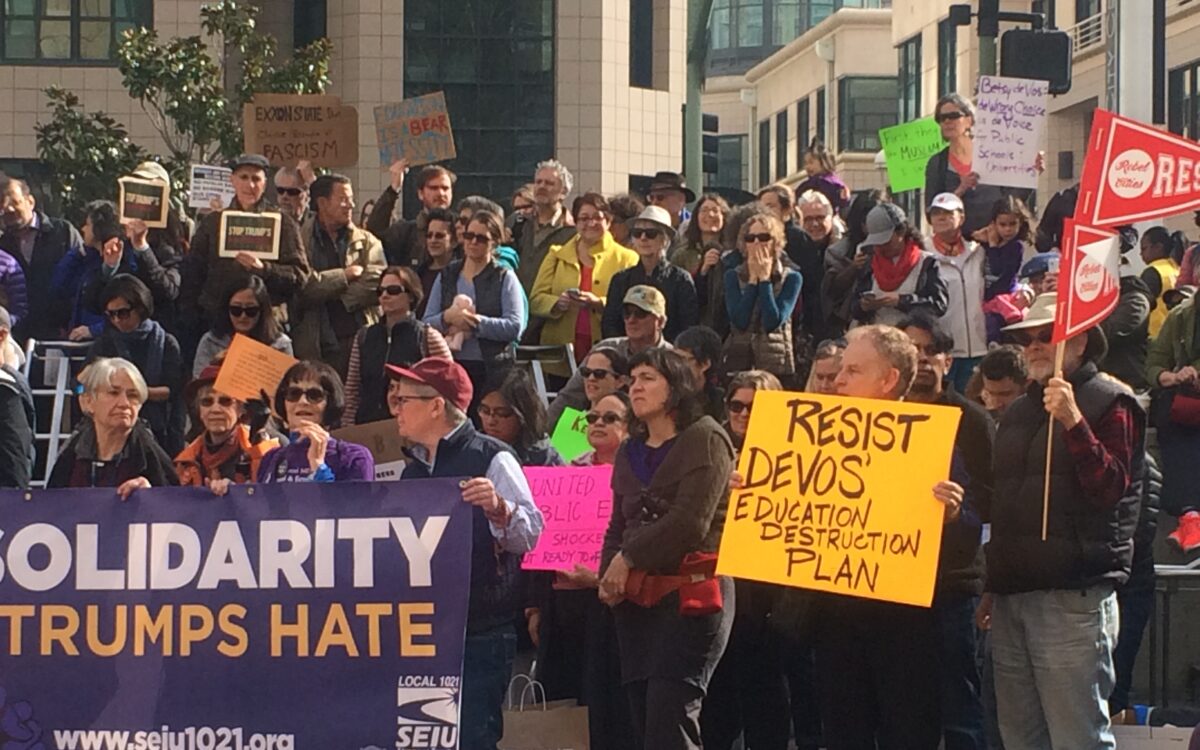 Credit: Carolyn Jones/EdSource
Teachers, parents and activists gathered in Oakland Jan. 31, 2017 to protest the nomination of Betsy DeVos as U.S. secretary of education.

Credit: Carolyn Jones/EdSource
Teachers, parents and activists gathered in Oakland Jan. 31, 2017 to protest the nomination of Betsy DeVos as U.S. secretary of education.

Just hours after Betsy DeVos took a major step toward becoming the next U.S. Secretary of Education, about 200 teachers, school board members, parents and activists gathered in downtown Oakland Tuesday to protest her nomination to the nation’s top education post.

“We need to talk to our students, our children. We need to make sure this struggle doesn’t die with us,” Eric Adams, who runs a drop-in youth center at Castlemont High School in Oakland, told the crowd at the lunchtime rally outside the Ronald V. Dellums Federal Building. “We need to teach them how to fight. Because this is a fight, and we’re not giving up.”

The Senate Committee on Health, Education, Labor and Pensions voted to approve DeVos’ nomination by a 12-11 vote on Tuesday morning. All Republicans on the committee cast votes in her favor, while all Democrats cast “no” votes. Her nomination now goes to the full Senate for approval.

The Oakland protest was organized by Bay Resistance, a network of education, housing and social justice groups, including the California Faculty Association and United Educators of San Francisco. The purpose of the rally was to protest DeVos’ positions promoting charter schools and vouchers – which parents could use at any school, including private schools – over a commitment to improving traditional public schools. On the campaign trail,  President Donald Trump argued for drastically scaling back the Department of Education and committing $20 billion in federal funds to promote a “school choice” program that would include taxpayer subsidies for private school tuition.

The demonstration followed another major protest on Saturday in downtown Los Angeles, organized by the California Teachers Association and attended by hundreds of teachers.

In Oakland, protesters listened to speakers, waved signs and chanted, “When public education is under attack, what do we do? Stand up, fight back!”

Cathy Orozco, a retired elementary school teacher who taught at Berkeley and Oakland schools, said she joined the protest “because I was a teacher, I’m a parent, I’m a grandparent and I care about public education for everyone.”

“DeVos doesn’t know anything about public education,” she said. “And I think she has a political agenda to give public money to private schools, especially schools with a religious agenda. I’m against that.”

“DeVos has zero experience. She did not represent herself well in the Senate hearings. What else could I do?” she said. “I believe that if the people lead, the politicians will follow. That’s why I’m here.”

“Even if DeVos is confirmed, we need to keep coming out. In fact, we need to come out even more,” Cathy Campbell, president of the Berkeley Federation of Teachers, told the crowd. “Because we are going to resist, and we’re going to keep fighting for our children.”

Protests against DeVos have taken place in multiple locations, including Washington, D.C., Chicago, Los Angeles, Miami, New York and outside the Anchorage office of Sen. Lisa Murkowski, R-AK, who sits on the Senate committee that approved DeVos’ nomination.

Murkowski was one of the Republican senators who voted to support her confirmation Tuesday, despite concerns that a private school voucher plan would undermine public schools in a state as large and thinly populated as Alaska, with many areas where there are few or no private schools.

However, she is also offering a glimmer of hope to DeVos’ critics, who are hoping that some Republican senators might vote against her confirmation when it comes to the Senate floor for a full vote. Murkowski said that DeVos could not necessarily count on her support at that time.

“She has not yet earned my full support, and when each of us have the opportunity to vote, aye or nay on the floor, I would not advise that she yet count on my vote,” Murkowski said yesterday.