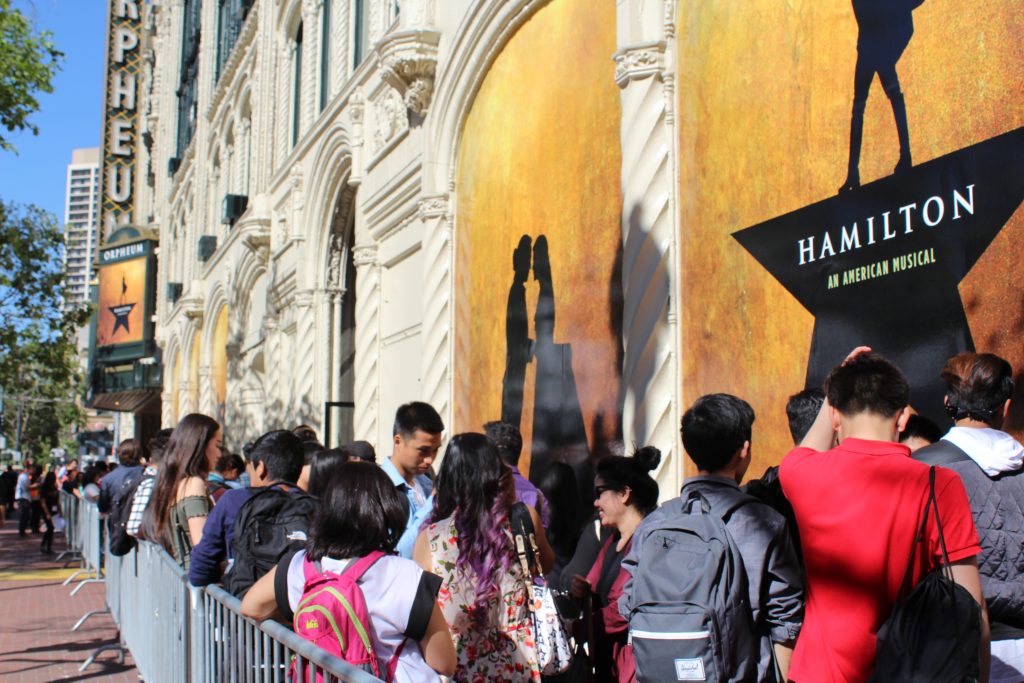 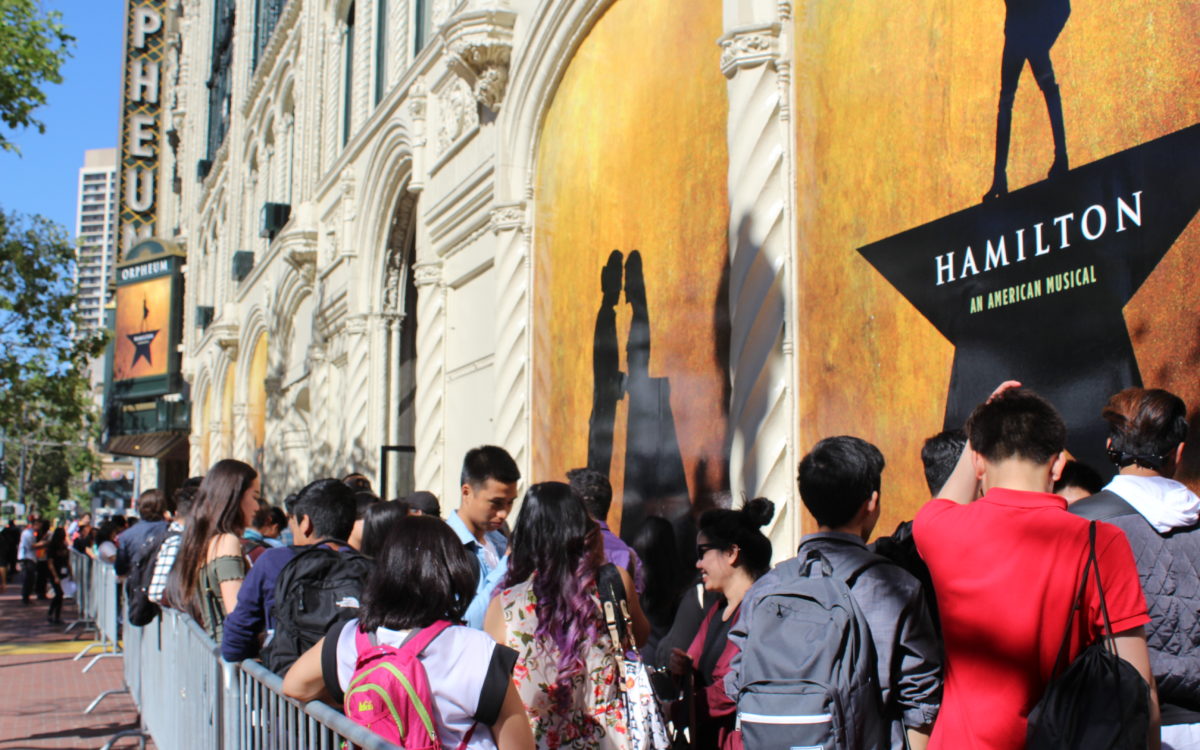 In the final scene of the Broadway hit musical “Hamilton,” the cast takes center stage, gazes into the audience and sings in an emotional crescendo, “Who lives, who dies, who tells the story?”

The lights dim, the crowd erupts, and the 2,000 high school kids in the audience know exactly who will tell the story: It’s them.

Thanks to a curriculum project backed by the “Hamilton” creators, thousands of students at high schools in California, Chicago, New York and other parts of the U.S. are getting a chance to immerse themselves in the life of Alexander Hamilton, see the musical for free, and write their own Hamilton-inspired original raps, poems, plays and songs to perform on the “Hamilton” stage prior to the show.

And it turns out, many of the students say the tale of Hamilton, an immigrant who rose from poverty to become a founding father and first U.S. Treasury Secretary, is their story, too.

“No matter what challenges you face, you can overcome them. It doesn’t matter where you came from or who your parents are. That’s what ‘Hamilton’ is about,” said Emma Le, a freshman at Independence High School in San Jose, who was among 20 or so students chosen to perform prior to a “Hamilton” matinee in San Francisco recently. “Alexander Hamilton was an immigrant. He was an orphan. He had nothing. And he did it, he rose to the top.”

The “Hamilton” education program, called EduHam, began about two years ago when Ron Chernow, author of “Alexander Hamilton,” the book on which the musical is based, and Lin-Manuel Miranda, creator of the musical, approached the Gilder Lehrman Institute of American History, a nonprofit devoted to history education, about drawing up an educational companion to the Hamilton story.

“The founding era used to be the castor oil of history education, but it’s been re-invented as the most fun, most sexy, most relevant part of the history curriculum,” said James Basker, president of the Gilder Lehrman Institute of American History.

Educators and historians at the Gilder Lehrman Institute created a high-school curriculum combining the music and creativity of the play, the historical narrative of Chernow’s book, and original documents available in the institute’s archives, such as the Federalist Papers and Hamilton’s letters to his wife.

Students in history, civics, drama, rhetoric or literature classes spend weeks poring over the Hamilton materials, and then – thanks to a grant from the Rockefeller Foundation – the students can see a matinee of “Hamilton” and meet members of the cast. One or two from each high school are selected to perform their original work before the show.

The curriculum is available to all schools, but the free tickets are available only to schools where the majority of students come from low-income families, also known as Title I schools. In all, EduHam will reach 250,000 Title I students over the next five years, said James Basker, president of the Institute.

“This is the most exhilarating thing I’ve seen in 40 years as an educator,” Basker said. “The founding era used to be the castor oil of history education, but it’s been re-invented as the most fun, most sexy, most relevant part of the history curriculum. No classroom teacher could have done that – Lin-Manuel Miranda made this possible.”

“Hamilton” traces the rise of Alexander Hamilton, from his youth in the Caribbean to his battles in the American Revolution, his role in shaping the Constitution and early economic policies, and finally his ill-fated duel with Aaron Burr. The plot, which weaves in a love story and messages about democracy and civic engagement, is told primarily through rap. Many of the cast members, including those playing George Washington and Thomas Jefferson, are African American.

The show won 11 Tony awards and is a near-perpetual sellout. Tickets for the San Francisco show sold for as much as $868. The show closes in San Francisco in August and moves to Los Angeles, where EduHam will begin in the fall.

The Bay Area EduHam performances were funded in part by Facebook, Google, GitHub, the Panta Rhea Foundation, the William and Flora Hewlett Foundation and the Stuart Foundation.

Jasmine Hussain and Angelica Aguilera, juniors at Hayward High School, were among the 8,000 or so Northern California high-school students to see one of the four EduHam performances in San Francisco. But they were “Hamilton” fans long before their teacher rolled out the Chernow book and played the soundtrack.

In fact, they’re the ones who arranged for their school to participate.

“My cousin at another high school said she was going, and I was like, no way. I was so jealous,” said Angelica. “So I talked to our teacher and principal, and they said OK. Oh man, we were so excited. We were freaking out. It’s so unreal. I still can’t believe it.”

“This is the most exciting thing that’s happened to me since the new J.K. Rowling book came out,” said Jasmine, Angelica’s best friend.

But even if the principal said no, the pair would have found a way to see the show anyway.

“Plan B was a fundraiser,” Jasmine said. “Well, a lot of fundraisers.”

Angelica and Jasmine, both daughters of immigrants, said they love the drama and emotion of the Hamilton story, especially the subplots surrounding Hamilton’s wife, Eliza, and her sister. Angelica and two other girls performed a poem they wrote about Eliza’s sister, who was known for her intelligence, wit and independence.

Their AP rhetoric teacher, Scott Buros, said the EduHam curriculum was a joy to teach, and he plans to continue using it even if show tickets aren’t available.

“Democracy, federalism … I have students who are genuinely excited about exploring these topics, which on the surface are pretty dry,” Buros said before his class embarked on their “Hamilton” outing. “And they’re learning how to read and interpret original texts, which are written in English but in a style we don’t use in contemporary America. It’s challenging, but they’re really excited about it.”

Sparking a love of history is the ultimate goal of EduHam, Basker said, noting that only 18 percent of 8th-graders scored “proficient” on the most recent National Assessment of Educational Progress standardized U.S. history tests.

“We can probably live our lives just fine without knowing chemistry, but how can we be good citizens without a grounding in American democracy?” he said. “What ‘Hamilton’ does, first and foremost, is make kids care. They learn that the story of America is their story, too. Through ‘Hamilton’ they become patriotic…. This is an opportunity to get a whole generation interested and involved in American democracy.”

Basker hopes the American history craze doesn’t end with “Hamilton.” He’d like to see teachers come up with creative, imaginative ways to teach all aspects of history, blending the arts, current events, original sources and literature to make historical events and people come to life.

“I sent Lin-Manuel Miranda a box of books about Abraham Lincoln with a note, ‘Here’s your next project,’ ” Basker said. “Or Frederick Douglass. Either one is fine with me.”