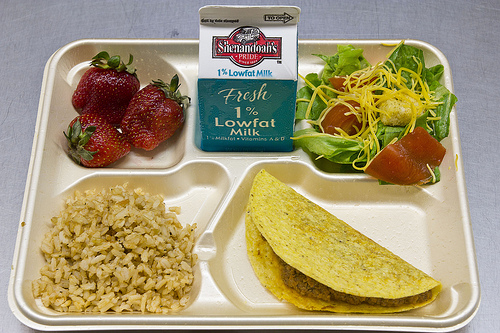 Students in California whose families owe money for school lunches will no longer be given only a snack — a cheese stick, an apple and a glass of milk — or nothing at all, until they’re all paid up. They’ll get the same meal as all the other students.

That’s because Gov. Brown signed SB 250, authored by Sen. Robert Hertzberg, D-Los Angeles.  The law will ensure that children are not denied a full lunch because of their parents’ debt.  The bill will also end “meal shaming,” the practice used in some districts across the nation of verbally reprimanding students in the lunch line or stamping children’s hands as a reminder to their parents they owe money.

Seeing legislation coming, this year Elk Grove Unified ended its policy of giving kids in debt only a cheese sandwich. Michelle Drake, director of Food and Nutrition Services for the district, told the Sacramento Bee that food service workers encouraged the switch. “It’s just not good for our children and it’s difficult on the staff. The last thing they want to see is a 3rd-grader and 4th-grader with that look on their face. We have changed it up for this school year.”

A survey by the Western Center on Law and Poverty, which supported Hertzberg’s bill, found that many districts didn’t post their policies for students whose families are in arrears in paying for the meals.  Of those that did, several dozen served less than a fully nutritional meal to those children. Torrance Unified, for example, provides “a snack consisting of crackers, a milk and fruit/veggies when a middle or high school student reaches zero balance.” For elementary students, they are allowed to overspend by $12.  These policies only apply to students whose families don’t qualify for federal meal subsidies

The law specifically says that districts are not required indefinitely to give parents a pass on not paying. Instead it requires that districts do all they can to enroll families in the federally subsidized school lunch program and also to notify families  — not bill collectors — of unpaid balances as soon as they are 10 days behind.

The state PTA and the California Teachers Association were among organizations backing the bill. There were no registered opponents.

This is an updated version of a story originally published on Sept. 17, 2017.