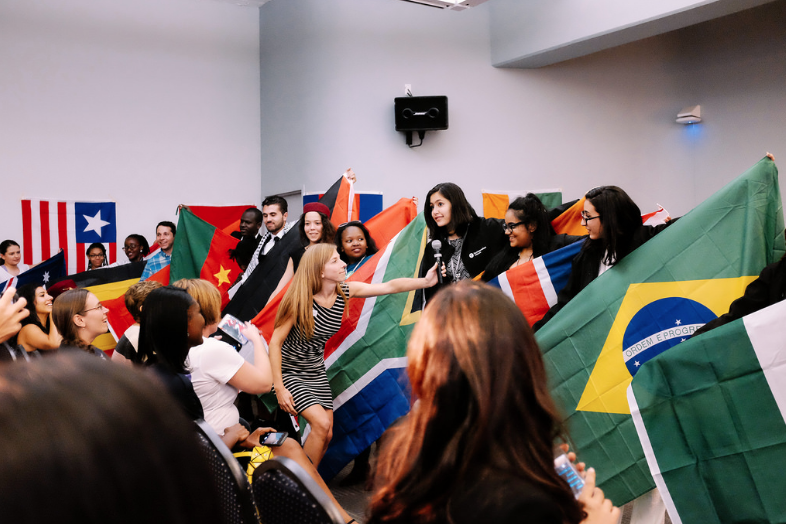 Photo courtesy of Technovation
Girls from throughout the world will compete in the Technovation finals in Mountain View.

Photo courtesy of Technovation
Girls from throughout the world will compete in the Technovation finals in Mountain View.

Sixty of the world’s most creative and visionary software designers will descend on the Bay Area this summer, and they all have two things in common: they’re all female and under age 19.

The girls — finalists in an annual global software design competition that this year drew thousands of participants from almost 100 countries — will gather at the Google campus in Mountain View Aug. 7-11 to showcase their mobile software applications in hopes of winning a $15,000 grand prize.

The contest, called Technovation, is one of numerous programs aimed at encouraging girls to study and pursue technology. According to the National Science Foundation, women are more under-represented in computer science than in any other scientific field. Only 18 percent of the bachelor’s degrees in computer science were awarded to women in 2014, up slightly from the previous year but down from 37 percent in 1985. And in the workplace, only 24 percent of the country’s computer scientists are women, according to the National Science Foundation.

Technovation is sponsored by a Los Angeles nonprofit and backed by the United Nations, Peace Corps and several tech companies. But the girls’ apps aren’t intended to make them the next generation of tech millionaires; they’re meant to improve the quality of life in their communities.

The apps, based on simple coding language and completed in just a few months, address some of the world’s most urgent problems: clean drinking water in the developing world, environmental degradation, access to health care, education for women, poverty and other issues.

Previous years’ winning apps have matched disabled people in India with jobs, taught women in Afghanistan to drive, provided a video platform for refugees to tell their stories to the world, and alerted drivers if they were too close to a bicyclist, among other innovations.

“Sometimes it takes a 12-year-old girl to see what’s cool,” said Tara Chklovski, chief executive of Iridescent, the nonprofit that oversees Technovation. “These girls are so ahead of their time, it’s very inspiring.”

TechBridge, Girls in Tech, Girls Who Code and the Girl Scouts are among the other organizations that offer after-school and summer tech classes for girls, with hopes of increasing girls’ interest and confidence in the field. Even the National Security Agency has a summer tech program for girls, one of its GenCyber youth camps. Most of the camps and classes are free.

Extracurricular STEM — science, technology, engineering and math — programs for girls have been shown to be effective at increasing the number of females in math and science, and improving girls’ achievement levels generally, said Laura Adolfie, chair of the Florida STEM chapter of the American Association of University Women and a former director of the U.S. Department of Defense STEM development office.

Even if the girls choose not to pursue math or science in college, the skills and self-confidence can help them excel in other fields, she said.

“It’s about determination, persistence, resiliency, communication skills, leadership,” Adolfie said. “Girls are just as capable as boys at solving hard problems. These programs can help them realize that.”

But it’ll take more than a few summer camps to fix the gender discrepancies in the tech sector, she noted. For starters, there should be more of these camps, enough so every girl who’s interested can attend, she said. And parents, teachers and the rest of the public need to consider what subtle messages they’re giving young girls that discourage them from pursuing math and science.

She cited a study published in the journal Science in January that showed that girls as young as age 6 begin to perceive boys as smart and girls as less smart.

“I think we all need to be more open-minded when it comes to educating girls,” Adolfie said. “If we do more work on the front end, when girls are very young, maybe we won’t need to do as much later.”

Chklovski, an India native who studied aerospace engineering at the University of Southern California, started Iridescent 12 years ago to change the way girls around the world perceive technology. Iridescent runs the Technovation competition as well as another program called Curiosity Machine, a K-12 engineering curriculum for schools and clubs. Combined, the programs have served 63,000 students and their families and trained 3,500 volunteer mentors since 2010.

“When I came to this country, I couldn’t believe I’d hear so many girls say, proudly, ‘I don’t like math, I’m not good at math,” she said. “Technology is the great equalizer, right? I thought that by improving girls’ computer and entrepreneur skills and the way they view technology, we could really have a big impact globally.”

Technovation is based loosely on the Girl Scouts model. Girls — ranging in age from 10 to 18 — meet after school, usually on campus, with a volunteer female mentor who’s either a mom, a teacher or local tech worker. Technovation provides online training for the mentors, so they can help even if they don’t have a tech background.

Technovation also provides a 100-hour coding curriculum. Working in teams of five, the girls are tasked with creating an app that addresses one of the United Nation’s sustainable development goals, such as education, equality, health or environment.

In the spring, the teams have a chance to show off their apps and pitch their business plans at regional conferences held throughout the world. Judges are women investors, computer engineers and other workers from the tech sector.

Of the thousands who enter, 12 teams are chosen for the final round. Technovation pays for the girls and their chaperones to visit the Bay Area for the week, tour tech companies, meet women computer engineers and entrepreneurs and, of course, socialize with each other.

A finalist from Dallas named Wendy, whose interview is also on the site, said, “I used to think, ‘Oh, I can never be one of those people.’ But the biggest part of the program is that it teaches you to believe in yourself. Now, oh my gosh, I can actually build projects on my own.”

It’s not unusual for investors to want to purchase the girls’ apps, or for the girls to want to see their apps used on a widespread scale, Chklovski said. But apps take a certain amount of time, energy and skill to maintain and market, which can be a challenge for girls still in school.

“We’re still looking at the best way to move forward about the future of these apps. Money — and time — can be a tricky thing to handle, especially for children,” she said. “Right now it’s a gray zone.”

Currently, the apps are not available for purchase, although that could change, she said.

But Technovation has seen impacts in other ways. Twenty-six percent of alumnae have gone on to major in computer science in college, and 58 percent have taken at least one computer science class. Nearly all said they have an increased interest in business, leadership and technology.

But the more important impacts might be subtler, Chklovski said. Educating women, especially in developing countries, can decrease poverty, improve community health, lower the rate of child marriage and overpopulation, and generally improve a community’s overall stability, according to the World Bank and United Nations.

“If you’re wondering what we should invest in, it’s women,” Chklovski said. “If you educate a woman, the whole community benefits.”