Fresno tackles its shortage of math and science teachers 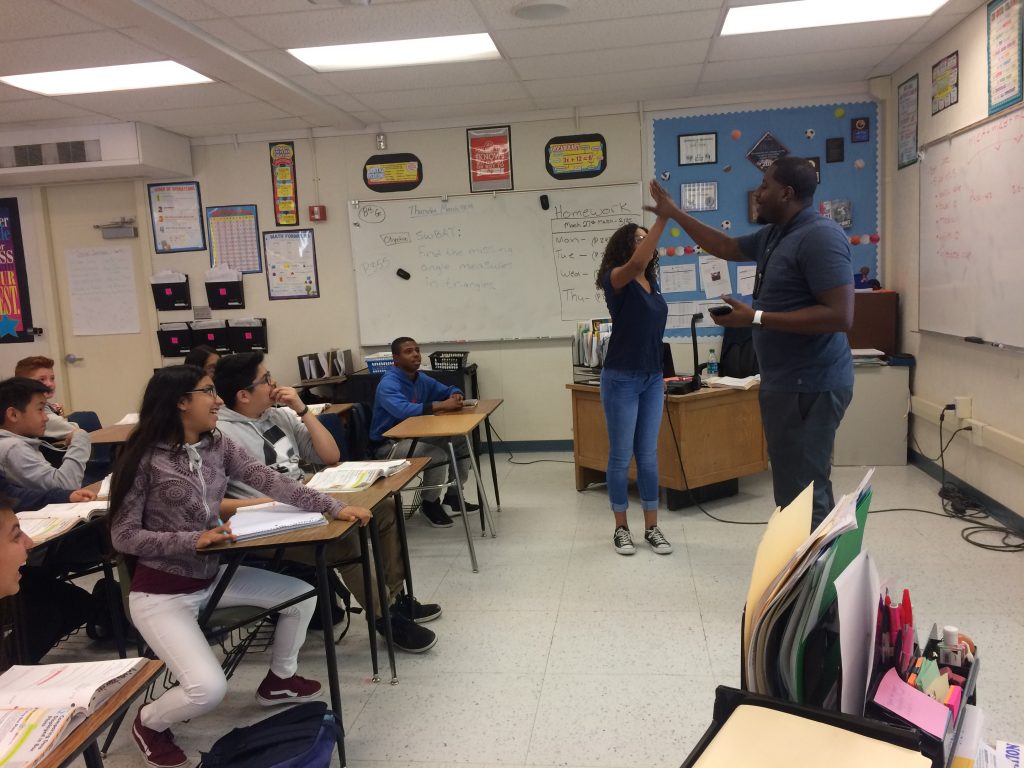 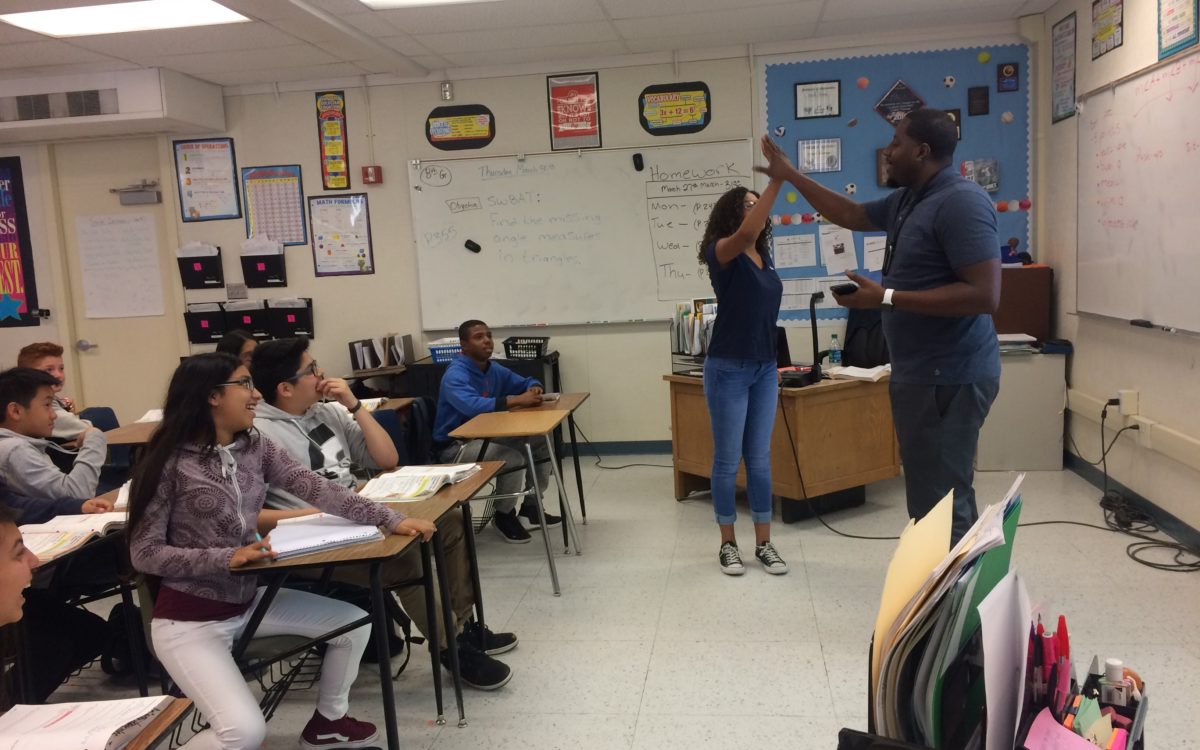 If you’re bright and friendly and live in Fresno, there’s a good chance Traci Taylor has encouraged you to be  a teacher. Most likely a math teacher.

Once a high school teacher herself, she now works in Fresno Unified School District’s teacher recruitment office, a 12-person army tasked with finding, training and retaining 300 to 350 teachers a year in California’s fourth largest school district. That’s a turnover rate of 10 percent per year and math, science and special education are hardest hit.

Taylor’s mission comes at a time when  Fresno – and the state – grapples with an acute teacher shortage that’s left many districts scrambling to fill classrooms every fall.

“At the grocery store, at Target, at Starbucks, anywhere I go, if I meet someone who seems smart and engaging, I give them my card and say, ‘Be a teacher! It doesn’t matter what your circumstances are, we have a program for you,’” said Taylor as she drove her white minivan around the sprawling, 92-square-mile district midway between Los Angeles and the Bay Area.

California’s teacher shortage is particularly dire in the so-called STEM subjects of science, technology, engineering and math. According to a 2016 report by the Learning Policy Institute, almost 60 percent of the state’s school districts reported a shortage of math and science teachers.

In Fresno, 168 teachers lack full credentials in the current school year. In 2015-16, the district hired 37 math and science teachers who aren’t fully credentialed, up from 22 the previous year and 10 the year before that.

Faced with these daunting statistics, Fresno Unified has found creative ways to fill teacher vacancies. Thanks to Taylor and her colleagues’ relentless recruitment efforts, the district usually fills 99 percent of its teacher vacancies by every fall.

Those efforts include billboards, TV advertisements and movie-preview ads. One program focuses on enticing mid-career math and science professionals to leave their careers and become teachers. Another program brings in experienced teachers from Mexico not as bilingual teachers but to teach science and math to all students. Four local high schools have “teacher academies” to guide teenagers toward careers in education, “because we realized the best solution for our teacher shortage is to grow our own,” Taylor said.

That’s all in addition to the 30-plus job fairs Taylor and her colleagues visit or host annually, not just in California but across the country.

Fresno’s children need and deserve qualified teachers, said Teresa Morales-Young, Fresno Unified’s administrator for teacher development. Nearly all of the 73,000 students in Fresno Unified qualify for free or reduced-price lunch. The district is predominately non-white with more than 1 in 5 speaking a language other than English.

“For me, it’s about making sure every child in our district can get the best possible education, so they can go out in the world and do whatever they want to do,” she said.

But, Fresno can be a tough sell: It’s hot, flat and among the most polluted metro areas in the U.S. Average rents and home prices are relatively low in a town where a quarter of the population is poor, but the starting teacher salaries are on the low side, as well: about $45,000 a year. Essentially a family-oriented agricultural town, Fresno lacks some of the cultural amenities and nightlife that people in their 20s might want in a city.

But there’s another side to Fresno, said Taylor, a lifelong Fresno-area resident and teacher herself. Being a teacher in Fresno can be a good life, she said. Yosemite Valley is about two hours away, weekends can be filled with Fresno State football games and tailgate parties, and top-notch farmer’s markets happen year-round.

“We tell people, if you come to Fresno, you can have a house and a spouse,” she said. “It’s affordable. You can raise a family. We’re two hours from the beach, three hours from the Bay Area, 90 minutes to the Sierras. … Sometimes I think about doing other jobs, but why would I? This is so exciting.”

From Mexico to Fresno

Aaron Faz’s road to the 7th grade math classroom in Fresno’s Yosemite Middle School started almost 3,000 miles away, in Monterrey, Mexico. That’s where he was working when he got the news on March 16, 2016, that he had been offered a three-year job with Fresno Unified.

“I couldn’t believe it. I was so happy,” recalled Faz during a break from his teaching duties recently. “As a professional, I had reached my objectives in Mexico and wanted to learn more. I wanted to be a better teacher, and what better place to go than the U.S. The U.S. has the best education system in the world.”

Faz is one of five teachers in Fresno, and 33 statewide, who are Mexican citizens working in California public schools. They’re hired through the Exchange Visitor Program for Teachers, a U.S. State Department program run in California by the California Department of Education.

Faz has a master’s degree and a teaching credential from universities in Mexico, and 10 years experience teaching middle school math. He went through four rounds of interviews before he was hired by Fresno Unified.

Genial, soft-spoken and patient, Faz had an easy way with his students during a recent lesson on probability. While he rolled fluorescent blue, green and purple dice on the floor, the students guessed the odds of certain numbers coming up, and he showed them how to translate the data into ratios and percentages.

Most of his students were Latino and about a third were English learners. Faz, who is fluent in English, taught the lesson in English, but when a few Spanish-speaking students looked confused he went over the lesson again in Spanish.

So far, teaching in the United States is a dream, he said. The curriculum is almost identical to what he taught in Mexico, he said, but the working conditions are infinitely better. In Mexico he had 45 students per class, little support from school administrators, and a blackboard instead of a computer. He had to work two jobs, totaling 12 hours a day, to maintain a middle-class lifestyle. In Fresno, he works one job and earns about $45,000, but California’s living costs eat up most of his extra income.

At the school, he has about 30 students per class, a computer, and what he described as phenomenal support from his co-workers and supervisors. And, he’s able to take English and teaching classes at Fresno State University, an opportunity he never would have had in Mexico.

“Fresno,” he said, “is amazing. They treat me like family here. This has been good for me.”

But the ultimate answer to the science and math teacher shortage might start in the classroom itself, said Marquita Grenot-Scheyer, assistant vice chancellor of teacher education and public school programs for the California State University system.  “We need all students to have compassionate, caring, competent teachers who get students excited about the subject matter, so the students say, ‘Hey, I want to do that. I want to teach math.’ ”

Typically, teachers without full credentials are more likely to work in schools with high percentages of poor and students of color, according to California State University’s Math and Science Teacher Initiative.

At Yosemite Middle School, where Faz teaches, nearly all the students are Latino and from low-income families. Four of the school’s 34 teachers – or 11 percent – have temporary credentials until they complete the coursework needed for a full credential.

From security guard to math teacher

Aaron Faz might have traveled 3,000 miles to teach in Fresno, but in a way, Thomas Williams’ path was longer. A former security guard at the middle school where he now teaches, Williams took online courses at night to earn a bachelor’s degree in liberal studies, and in his rare free time coached football, girls basketball and girls soccer. After completing his degree, he enrolled in Fresno Unified’s Transition to Teaching program through Fresno State, where with an intern credential he attended classes nights, weekends and in the summer while teaching middle school during the day. The process took him more than four years.

“I love it. I am having a great time,” said Williams, who has an affable, easy-going nature and an infectious smile. “With all the coaching I’ve done and my experience in campus security, this just seems like the right career for me. I feel like I’ve been coaching and mentoring kids all my life.”

Williams said his experience as a school security guard and coach taught him the importance of developing strong relationships with the kids, how to effectively handle discipline and how to control the classroom.

He’s found it easy teaching math. It was his favorite subject in high school and in college where he majored in liberal studies, and he tries to impart that joy to his students.

On a rainy morning recently, he arranged for pairs of students to compete in push-ups and sit-ups, and for the rest of the class to record the results for a lesson on averages, means, mediums and other data sets. Students erupted in cheers for their exercising classmates and nearly all volunteered for sit-up and push-up duty.

“Honestly, I have students who start out the year saying they have a fear of math, who have a 1.5 grade point average, and now they think math is fun and their grades are up,” he said. “For me, the money is irrelevant. This is my way of doing something for our future.”

Fresno has been successful filling its teacher vacancies every fall, but hiring hundreds of teachers who lack full credentials  is not a long-term solution for any district, said Talia Milgrom-Elcott, executive director of 100kin10.

To really solve the teacher shortage, states need more talented young mathematicians and scientists to choose teaching, instead of tech, for example, as a career.

“We’ll know we’ve succeeded when a STEM teacher asks their class who wants to be a science teacher, and all the kids raise their hands.”

The obvious obstacle is pay. In Fresno, for example, starting teachers earn $45,000 annually while entry-level software engineers in that city earn $66,000, according to Glass Door, the employment web site. In Palo Alto, by comparison, starting teachers earn $63,000 and can top $127,000. Entry-level software engineers in Silicon Valley start at $75,000.

But, as recruiters tell prospective teachers, in Fresno as elsewhere, teacher salaries increase steadily, and can top $90,000 in Fresno when a teacher earns a master’s degree and takes on extra duties, such as coaching. Plus, teachers can get summers off, relative job security and a pension – all but unheard of in the private sector.

In Fresno, Traci Taylor stays busy most days following up with the hundreds of people enrolled in district-sponsored teacher-training programs, those considering it, and those who’ve graduated and are now regular credentialed teachers. Considering that nationwide 17 percent of new teachers quit the profession within the first five years, Taylor wants to make sure teachers get the support and encouragement they need.

“The perseverance of people in our teacher training programs is amazing to watch,” she said. “Our motto is, becoming a teacher is like on-ramps to a highway. There are lots of ways on to the highway, and they’re all right.”