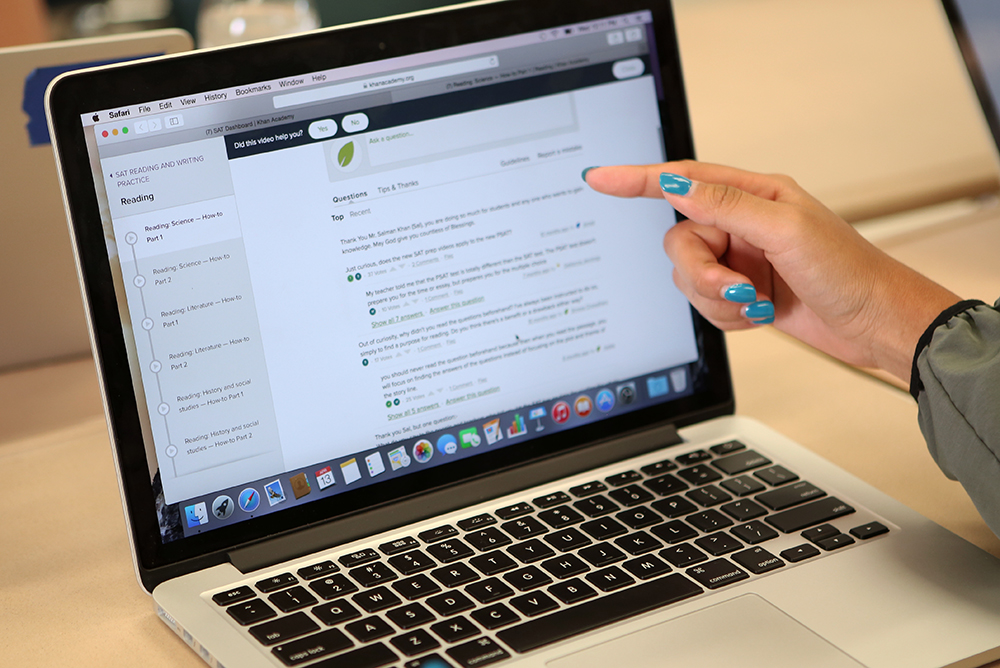 FERMIN LEAL/EDSOURCE TODAY
A student demonstrates on her MacBook how she uses the Khan Academy test prep program to study for the SAT.

FERMIN LEAL/EDSOURCE TODAY
A student demonstrates on her MacBook how she uses the Khan Academy test prep program to study for the SAT.

The partnership between the College Board and the online Khan Academy in offering free SAT prep tutorials has helped boost scores significantly on that widely used college entrance exam, the organizations announced Monday.

Students who studied for 20 hours through the personalized lessons on Khan Academy showed an average 115-point increase between their earlier and preliminary PSAT/NMSQT exam and the actual SAT that colleges use to help decide admission offers, according to a study from the two groups. That improvement was reportedly double the average increase of students who did not use the Khan tutorials. A perfect score on the two parts of the SAT would be 1600 total.

In March 2016, the College Board started to offer its dramatically revamped SAT, which aligned the test more closely with high school classes and ended penalties for guessing. The Khan Academy’s free “Official SAT Practice” site of videos and exercises was created for that change and promised to help level the playing field for low-income students who could not afford private coaching or commercial preparation.

The website uses earlier PSAT/National Merit results and practice tests to focus on students’ personal weaknesses in math and English. Some school districts in California, such as Long Beach, and youth groups such as the Boys & Girls Clubs, have embraced the new Khan SAT tutorials.

On Monday, College Board and Khan officials said the study of 250,000 students over the new test’s first year showed the partnership is working well and that practice paid off for young people.

However, firms that offer paid SAT prep classes and the critics of standardized tests noted that the College Board in the past had argued against the value of test preparation, and they also wondered whether students in the survey had used other prep aids beyond the Khan materials.

College Board President David Coleman told reporters in an online conference Monday that he was particularly pleased that the gains seemed not to vary much by students’ gender, race, income level or high school GPA. “It is good news that practice is an equal opportunity employer,” he said. “And the great news is that it is free.” Scores were not released for different demographic categories. African Americans and Latinos on average have scored lower on the SAT than Asians and whites.

A College Board statement said that “underrepresented minorities are spending approximately 10 percent more time on average practicing (on Khan) than their white peers. These are promising trends, and we’re looking forward to studying them further.”

The report said that shorter practice periods could lead to gains too, with six to eight hours of Khan practice helping to produce an average 90-point increase.

“The SAT is a strong measure of college readiness. It is heartening to see this positive association between personalized practice on Khan Academy and growth in college readiness,” said Sal Khan, CEO of the nonprofit namesake online academy, which was founded in 2006 and is based in Mountain View.

Robert Schaeffer, public education director of The National Center for Fair & Open Testing (FairTest), which has long questioned the value of standardized college entrance exams, said the announcement “shows the hypocrisy of the testing business.” He noted that the College Board previously disputed the claims of commercial companies that charge for test preparation classes that they boosted scores by as much as 300 points. He said that the College Board will use the new results to further market the SAT, which is in stiff competition with the ACT exam.

Schaeffer insisted that the Khan course “doesn’t level the playing field” since many students still pay for private coaching.

At the Princeton Review, one of the major commercial test prep companies, director of national outreach James Murphy congratulated students “who did the hard work” on the Khan classes  to raise their scores. “We know that prep matters, and we are glad to see that College Board now recognizes this as well,” he said.

Murphy said he thought that students in the Khan sample probably were very motivated and turned to other prep resources and classes as well.

In response, a College Board statement emphasized that the link between score growth and time spent on Khan Academy courses remains consistent over time and across all demographics “leading us to believe that Khan Academy’s Official SAT Practice is a significant factor” even if students used other resources.

Murphy said Princeton Review has not yet done enough analysis to say how well its own customers have done on the new SAT.

Kaplan Test Prep, another well known prep firm, also expressed skepticism about the new report. In a statement, Lee Weiss, Kaplan’s vice president for college admissions and K-12 programs, said that touting score improvements across large groups of students “is misleading” since it signals a magic bullet when in fact so much depends on individuals’ work ethic and aptitudes. So Kaplan, which also offers a free live online SAT Preparation in addition to its paid courses, does not release surveys about score gains and does not promise specific numerical boosts, he said.