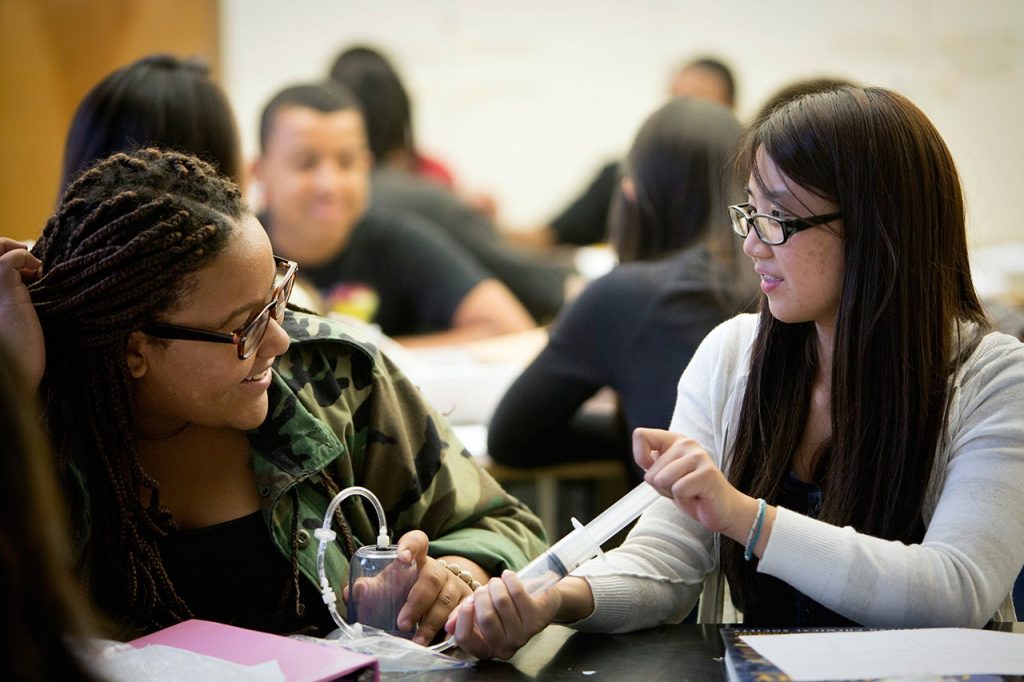 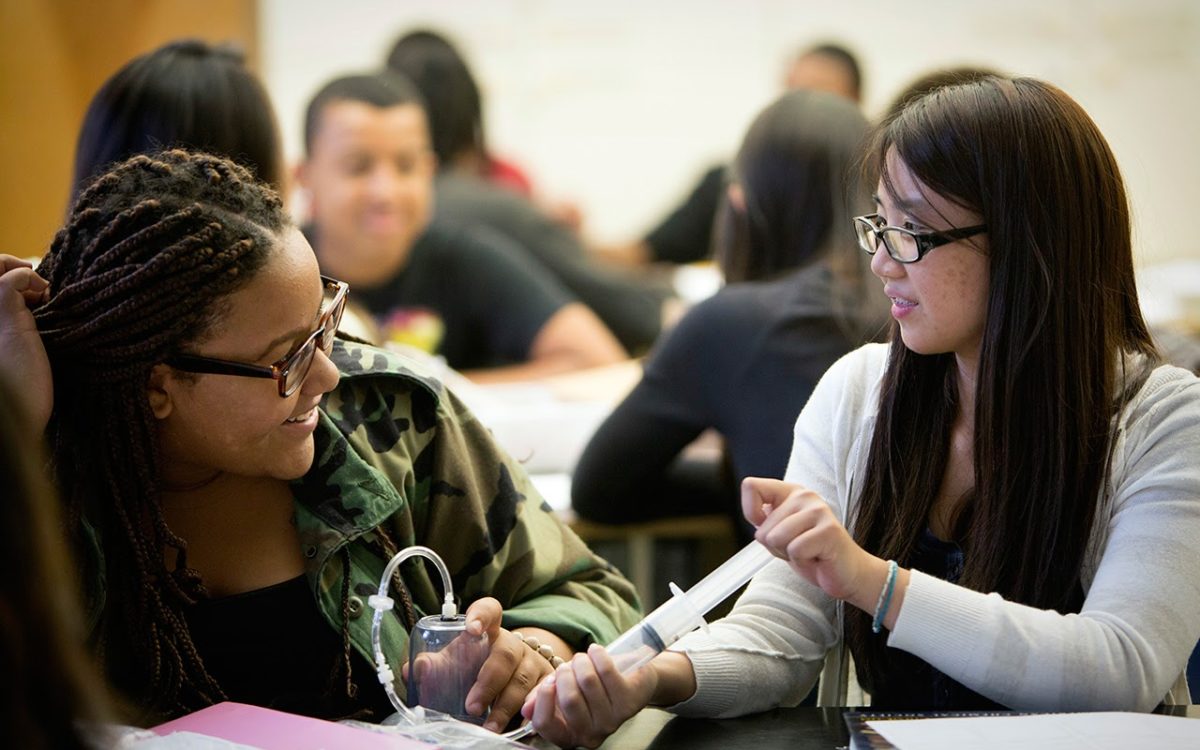 That’s been popular with students and teachers who say it’s a more effective way to learn science than studying textbooks and memorizing facts, but the cost of all those underwater robots and exploding chemicals has left some teachers wondering how they can successfully implement the standards with ever-restricting budgets.

Dozens of grants are available for teachers looking to fund classroom projects and field trips. Here are a few:

“I love the new standards, I really do. But it’s so expensive, I just don’t see how it’s going to happen,” said Laura Ruiz, a science teacher at a middle school in Los Angeles Unified. “All of us teachers are spending hundreds of dollars a year of our own money to purchase supplies. Is there a cheap way to teach these standards? I’m trying to find one, but I just don’t think so.”

The new K-12 standards, called the Next Generation Science Standards, were approved by the California State Board of Education in 2013 and are gradually rolling out in districts across the state. All schools are expected to have fully implemented the new standards by spring 2019, when the state gives its first official assessments.

Hundreds of schools have already switched to the new standards, which are intended to give students a deeper understanding of scientific concepts by conducting as many as three or four science experiments a week.

But even the simplest science experiments cost money. Vinegar and baking soda for 150 middle-schoolers to make their own volcanoes costs at least $50. For a lesson on thermal energy, calcium chloride, ammonium nitrate and plastic baggies for 150 students to make their own hand-warmers can cost at least $65.

At the California Science Teachers Association conference in October, dozens of companies filled the exhibition hall hawking their Next Generation-aligned science gizmos, ranging from plastic atom models to $5,200 robotics kits.

But most of those gadgets are out of the question for teachers like Ruiz, who has a $200 annual budget for science supplies. She tries to give her students one hands-on project a week, which means she must be creative.

She’ll try to stretch out a project over several days or weeks, having the students try different variations of the same scientific principle. Or she’ll apply for grants to fund specific projects, although grant applications can take hours to complete, take months to come through and sometimes don’t result in funding at all.

Asking students to bring supplies from home or ask for money from their parents is also an option, although not ideal because 95 percent of her students qualify for free or reduced-price lunch.

Elizabeth Walsh, a science education professor at San Jose State University, said Ruiz’s experience is not unusual. The new science standards may be popular, but they’ve been easier for wealthy districts to implement than those with less money, she said.

“You don’t need a $3,000 piece of fancy equipment to teach Next Generation Science Standards, but you do need the basics,” she said. “You need a working Wi-Fi connection. You need beakers. You need measuring equipment. You want your students to participate in real science, like real scientists do, and that costs money.”

In general, districts with more resources can invest in higher-quality science materials, and districts with less money are forced to shift the cost onto teachers and students, she said. The result is that lower-income students might not receive the full benefit of the Next Generation Science Standards — an unfortunate irony, Walsh said, because the standards are intended to promote science among students who are under-represented in the field.

“That kind of inequity has been a reality in our educational system for a long time, and will continue to be until the funding mechanisms change,”she said. “The fact is, some teachers are getting thousands to buy Next Generation materials and some haven’t even been trained in the standards yet. It’s an equity issue.”

Dozens of grants are available for science teachers, ranging from pet store coupons to fund a classroom pet, to $5,000 from Toshiba for hands-on engineering projects.

Some teachers have been turning to a nonprofit website called DonorsChoose.org, where teachers describe the project they hope to fund, post pictures of their students, delineate the costs and hope the public donates.

Founded in 2003, the website has helped raise more than $600 million for U.S. classrooms and served nearly 400,000 teachers. Since the Next Generation Science Standards were introduced nationally in 2011, the amount of annual donations has more than tripled, from $34 million that year to $113 million in 2016, in part due to school budget cuts and a rush of science teachers asking for donations, said DonorsChoose.org vice president Chris Pearsall.

“If we weren’t here, many of these teachers would be spending that money out of their own pockets,” he said. “The teachers we hear from say they’re not going to let funding challenges stop them from helping their students. … We hope we can lighten the burden for teachers.”

About 75 percent of the projects listed on DonorsChoose.org get funded, Pearsall said, either though individual donations or by foundations.

Among the best-selling materials for the Next Generation Science Standards are FOSS kits, which are boxes of scales, thermometers, funnels, silkworm eggs, globes and other materials for K-8 science experiments. FOSS, which stands for Full Option Science System, is used by 20,000 schools and districts, including Los Angeles Unified and the New York City public schools.

But FOSS kits are not inexpensive. To outfit a 5th-grade classroom with the full set of three kits — “Mixtures and Solutions,” “Earth and Sun” and “Living Systems” — would cost $4,500. But the kits provide materials for two or three science experiments a week for a school year, and the materials are designed to last nine years, said Mariel Warnock, senior campaign manager at Delta Education, the company that produces FOSS kits.

To pay for the kits, some schools turn to DonorsChoose.org, fundraise or apply for grants, she said. Some states use the federal money from their Every Student Succeeds Act allotments. And Delta Education works with districts to find affordable options, she said.

At Yuba Environmental Science Charter Academy, a K-8 school in rural Yuba County, middle school science teacher Deborah Burdette has become a master at applying for grants. After years of spending hundreds of dollars a year out-of-pocket on supplies, she now collects thousands in grants from corporations and education foundations.

“It takes a lot of time and sometimes you have to apply months in advance, but when they come through it’s pretty cool,” she said. With one of her grants, she purchased garden supplies, allowing her students to study soil, water cycles, decomposition, food supplies and other topics that are part of the Next Generation Science Standards.

With an annual supply budget of $250, she’s also become an expert in low-cost science experiments. Among her students’ favorite projects: spinning spider webs out of dental floss, building paper chairs that can hold a stuffed animal, testing humidity with glass jars and making weather gauges out of thermometers and empty milk cartons.

“I go to the dollar store a lot. The dollar store is my friend,” she said. “For a classroom teacher it can be hard to find the time for all this. You have to be creative.”