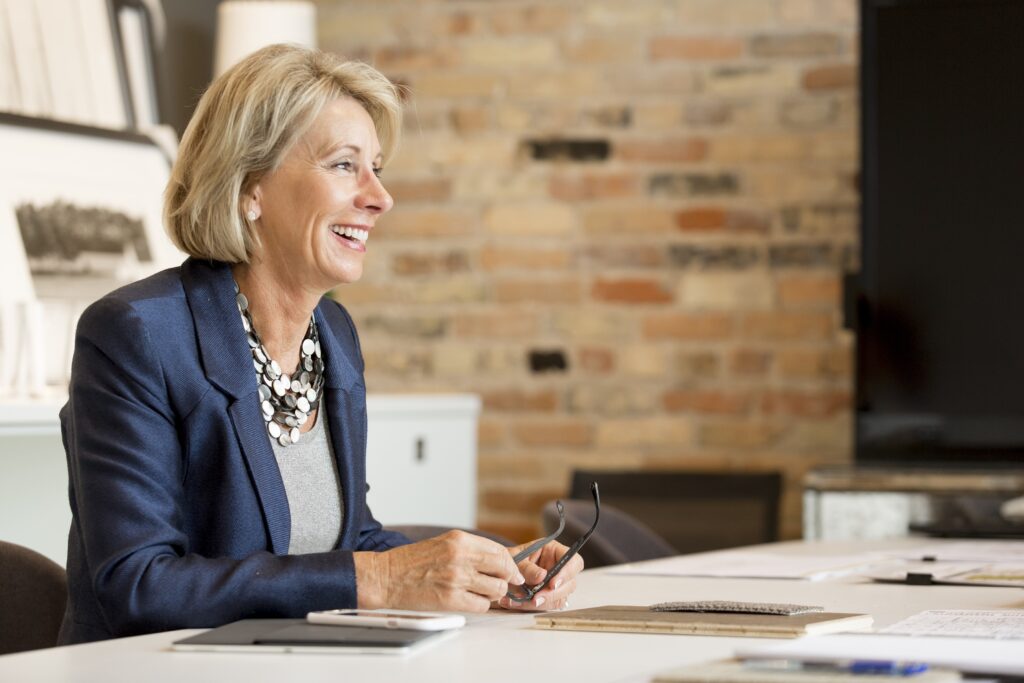 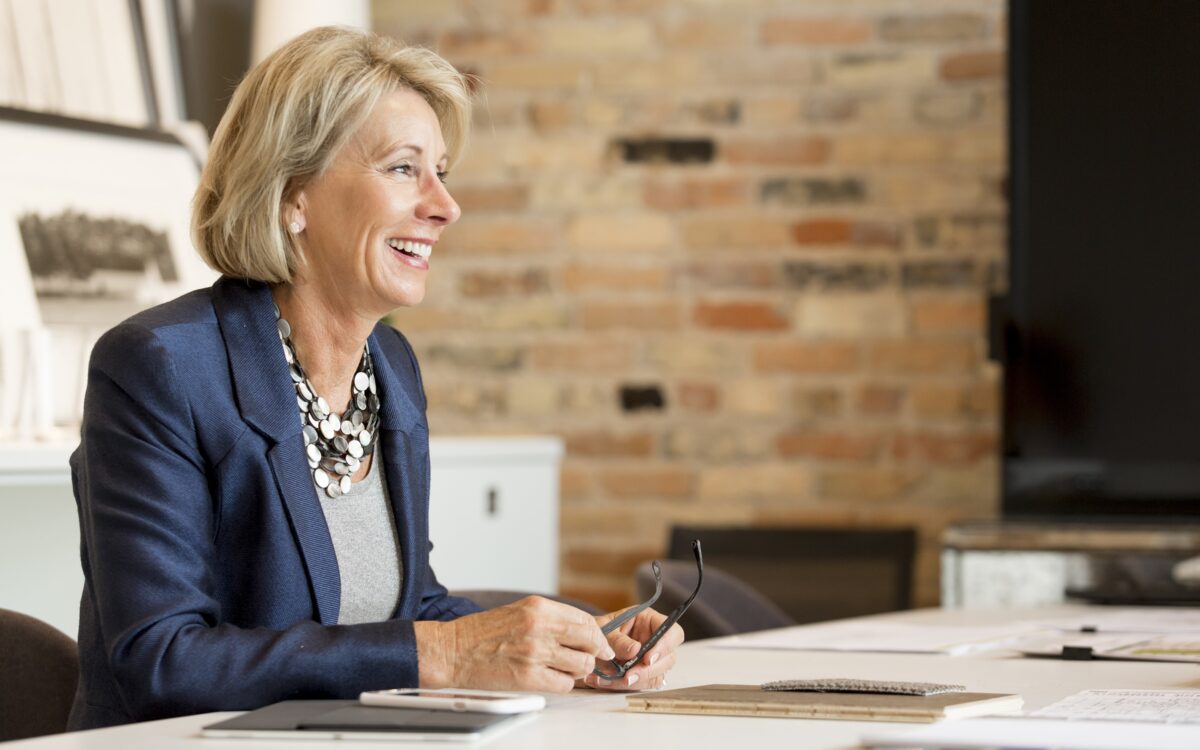 It is an unlikely duel between two multibillionaire philanthropists who both support charter schools.

Broad’s opposition to DeVos, President Donald Trump’s nominee to be U.S. secretary of education, underscores the complexity of the politics of the charter school movement, and is revealing further fault lines in it.

But in a remarkably blunt letter to Senate Majority Leader Mitch McConnell, R-KY, and Senate Minority Leader Chuck Schumer, D-NY, this week, Broad went even further, portraying DeVos as a threat to the public education system in the United States.

“With Betsy DeVos at the helm of the U.S. Department of Education, much of the good work that has been accomplished to improve public education for all of America’s children could be undone,” he wrote.

“At the risk of stating the obvious,” Broad wrote, “we must have a secretary of education who believes in public education and the need to keep public schools public.”

Broad’s broadside against DeVos is especially notable as he has been the target of ongoing criticism by the state’s teachers unions regarding a plan devised by his foundation, the Eli and Edythe Broad Foundation, and other charter school advocates that envisioned a massive expansion of charter schools in Los Angeles Unified School District. The district already has more charter schools than any district in the nation. The “Broad plan,” as it is often referred to, aimed to eventually enroll as many as half of the district’s more than 600,000 students in charter schools.

The plan has turned Broad into Enemy No. 1 among teachers representatives. At a 2015 demonstration at the opening of Broad’s new art museum, Alex Caputo-Pearl, president of UTLA, the union representing teachers in Los Angeles Unified, said: “We’re very concerned that Eli Broad is part of a network of foundations and billionaires who are actually behind a plan to undermine public education by opening unregulated schools, unregulated charter schools that don’t serve civil rights and that don’t serve kids.”

More recently, Broad became one of the central targets of the California Teachers Association’s “Kids Not Profit” campaign, which has zeroed in on about a half-dozen billionaire investors in charter schools, including Broad. The goal of the campaign, according to the CTA, is “to expose the coordinated agenda by a group of billionaires to divert money from California’s neighborhood public schools to privately managed charter schools.”

But lest anyone think that DeVos and Broad are part of a tight network of pro-charter billionaires that plot strategy together, Broad said in his letter to McConnell and Schumer that he had never met her.

He allowed that she is “undoubtedly kind and well intended and cares deeply about children.” Other than that, Broad could not find anything about her nomination to support.

Broad also worried about “potential conflicts of interest” DeVos would bring to the department. This was an apparent reference to her investments in education companies that could benefit from policies she would promote, or be required to enforce, as head of the Department of Education.

He also said he had a concern about DeVos’ “ability to enforce key provisions of the range of federal statutes entrusted to this role.”

Broad seemed to be referring to DeVos’ views on the landmark federal law on special education. She has been criticized by some senators and others for her seeming lack of knowledge about the Individuals with Disabilities Education Act affecting millions of special education children – and her written response to questions from senators that did not seem to be a strong endorsement of the U.S. government’s role in enforcing the law.

A widespread criticism of charter schools has been that they do not serve the same proportion of special education children as regular public schools, in effect cherry-picking easier-to-educate children. It is a charge that advocates reject, but they fear that having a pro-charter secretary of education who is not viewed as a vigorous enforcer of special education laws would not be good for the movement.

Broad also questioned whether DeVos recognized the importance of the Department of Education’s Office of Civil Rights. Republicans on Capitol Hill have made it clear that they intend to shrink the office, which they believe has vastly overreached in enforcing federal laws. At the same time, many charter advocates have insisted that their main goal is to promote equity and to ensure that students who have been historically marginalized succeed.

Broad also said he was disturbed by DeVos’ views on guns in school. At her confirmation hearing, Sen. Chris Murphy, D-CT, whose state was the site of the Newtown massacre, asked her whether there should be more guns in schools. She replied by saying that should be a matter left to local schools to decide. Schools in Wyoming, for example, might need a gun to protect them against grizzly bears, she replied.

“After far too many school shootings in this country, we must have a secretary of education who believes guns have no place in our schools,” Broad wrote in his letter.

Since “the Broad plan” to expand charter schools in Los Angeles became public, it has morphed into a new nonprofit organization called Great Public Schools Now, which has gone out of its way to say it is interested in promoting great schools, whether they are traditional public schools or charter schools. It says it is not promoting any set number of charter schools. “Nor are we devoted to charters as the only high-quality option for students,” the organization states on its website. “There are many district schools providing a sound education as well.”

The creation of the new organization has not quelled UTLA criticism of Broad and charter school supporters, as evidenced by the fierce exchanges between union leader Caputo-Pearl and Myrna Castrejón, executive director of Great Public Schools Now, at an Education Writers Association symposium in Los Angeles last week.  Caputo-Pearl was not persuaded by the grants the organization has given to promising public schools, saying its board members “are ideologically committed to unregulated charter growth.”  Castrejon, in turn, said her organization is actually helping the district to bring back children to the district by supporting both high performing public schools and charter schools.

On the matter of DeVos, however, Broad has found common ground with the teachers unions, which have organized massive protests against her. In a sentiment not that dissimilar to Broad’s, they have declared that she “would be a disaster for California’s students and public schools.”

Whether Broad’s critique of DeVos will make a difference will be known by next week, when she comes up for a vote on the Senate floor. So far, two Republican senators have indicated that they will vote against her. All it would take is one more to join them to block her nomination. But no other Republican senator has given any indication of voting against her, and Senate leaders and the Trump administration have expressed total confidence that she will be confirmed by the full Senate.

Leave a Reply to Wayne Steffen