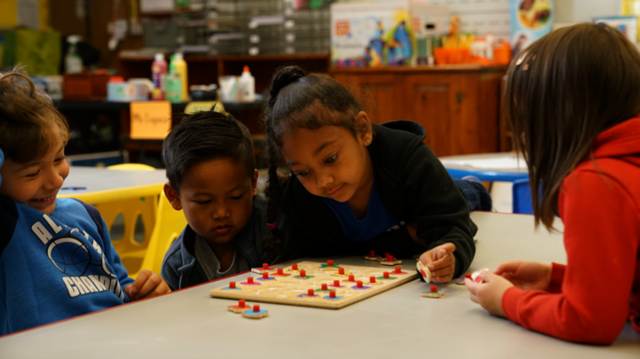 By implementing summer programs for students in early grades and high-quality preschool that focuses on preparing students for kindergarten, one California county is improving the reading skills of its young children.

While San Mateo County has a significant number of residents with advanced degrees, 44 percent of 3rd-graders in the county were not reading at grade level, based on standardized test scores in 2012-13, said Diana Harlick of the San Mateo County Office of Education. The startling statistics spurred community organizations and the county office of education to launch The Big Lift, a preschool-to-3rd- grade initiative with a mission to improve the reading skills of children in San Mateo County by 2020. The program was implemented in 2015.

“The causes of the achievement gap are multifaceted and so the solution must be as well,” Harlick said. The Big Lift focuses on various factors that can contribute to gaps in student performance and addresses them in intentional ways, such as parent workshops and increasing the number of slots in a preschool program, she said. Some Big Lift preschools have also expanded from part-day programs to full-day programs that serve children from 8 a.m. to 3 p.m.

According to research highlighted by The Annie E. Casey Foundation, children who do not read proficiently by 3rd grade are more likely to fall behind academically and drop out of high school compared to their peers who are reading at grade level.

Research also shows that proficiency in reading by the end of 3rd grade helps students to “shift from learning to read to reading to learn,” meaning they understand more complex subject matter as they start 4th-grade work, according to the Campaign for Grade Level Reading, a national effort focused on the importance of 3rd-grade reading.

The Big Lift program is taking on a challenge facing the entire state.

In Los Angeles, Public Counsel, a public interest law firm, this month filed a lawsuit against the state, alleging it failed to address “the literacy crisis” among California students.

To boost reading skills, The Big Lift has provided millions of dollars to local organizations that work with schools in San Mateo County. In the first round of funding for 2017-18, The Big lift awarded $4.4 million to 11 organizations located within the boundaries of four school districts in San Mateo County: Cabrillo Unified in Half Moon Bay, Jefferson Elementary School District in Daly City, South San Francisco Unified and La Honda-Pescadero Unified.

In a recently released study, RAND researchers found that more children who participated in Big Lift preschools were ready for kindergarten than children with no preschool experience. It is the first in a series of RAND reports that will evaluate the program.

“This finding is consistent with existing literature suggesting that preschool enrollment can support the development of young children compared to those experiencing only care at home with a parent or relative,” the report states.

Erica Hays, preschool director at La Honda-Pescadero Unified, a small school district in San Mateo County, said many families in her district are geographically isolated, might live on ranches and are not close to playgrounds. That limits opportunities some young children have for interaction with each other. Hays said her district has expanded its preschool program from half day to full day while maintaining a new year-round schedule. That has encouraged more families to participate. As a result, children have been able to build friendships and boost their vocabularies in the process.

Prior to The Big Lift, “we would have most of our students enter kindergarten at a beginning level for English and now they enter at an intermediate level and higher,” said Hays, who is also the district’s English language development coordinator.

In the second evaluation of the program, The Big Lift Inspiring Summers Impact Report, researchers found that children who participated in the summer reading program in 2017 improved their reading skills, such as understanding the relationship between letters and sound — for example, knowing the sound that “t” and “h” make when combined.

It also found the program reduced summer learning loss, which refers to a loss of academic skills or knowledge over the summer when children are not typically in structured learning activities. In fact, the report found, children in the program improved their reading skills.

The report also found after participating in the summer program, 88 percent of parents said they became more involved in their child’s education and 93 percent of teachers said students had a more positive attitude about school. The report, released in November, was produced by BELL, Building Educated Leaders for Life, a national organization that partners with schools and community organizations to provide academic programs in low-income neighborhoods.

In Cabrillo Unified, in Half Moon Bay, Rosalva Segura, a service coordinator for the district’s preschool to 12th-grade programs, said the district started the Big Lift initiative through a summer program for its students in 2015. The following school year, the district used The Big Lift to expand its preschool from three days a week to five days a week.

Segura said it was an opportunity to introduce young children to basic skills and classroom etiquette, such as how to share or sit in a circle for an activity. Children also learned social and emotional skills, such as how to manage their emotions and express what they want, think or feel with words.

The Big Lift has been most instrumental in helping the district build relationships with parents, Segura and others said. Many districts participating in The Big Lift introduced parent workshops to discuss the value of reading at home. Anne Campbell, San Mateo County Superintendent of Schools, said greater parent involvement has been one of the successful outcomes of the program.

“Parents are really engaged in reading to their kids in ways they weren’t before,” she said.

The Big Lift is also not just an effort of the county and school district but community organizations that are willing to collaborate and work on behalf of students.

“I am heartened to see the progress our children are making, which means the Big Lift is on the right track,” Campbell said. The end goal is to improve reading proficiency for 3rd-graders in the county from its present score of 55 percent reading at grade level to 80 percent by 2020. It’s ambitious, Campbell said, “but we wouldn’t be doing it if it wasn’t ambitious.”