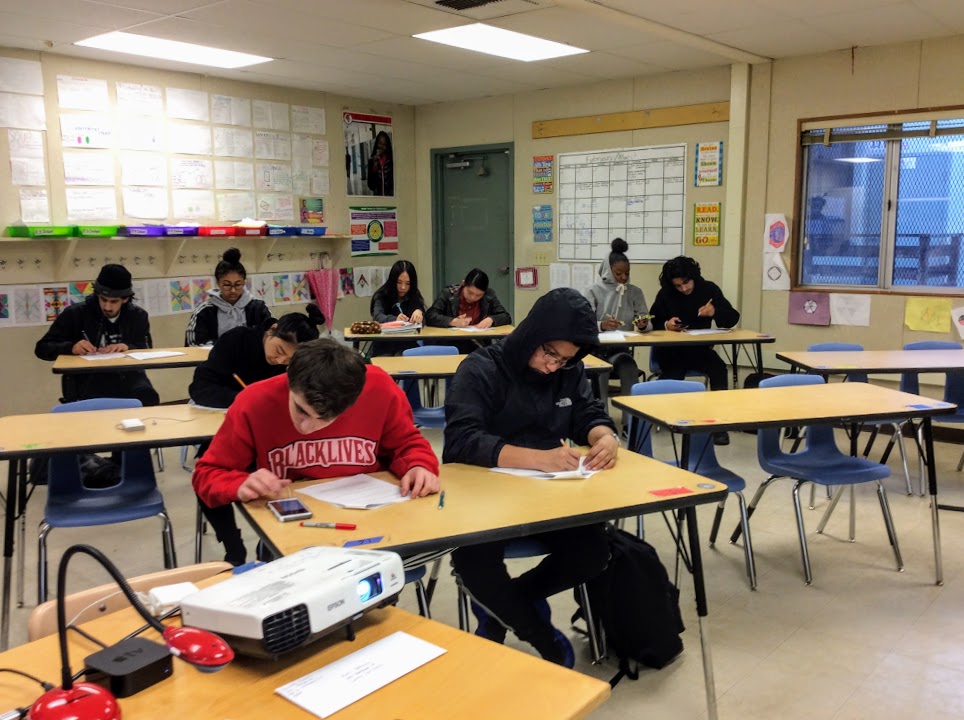 Theresa Harrington/EdSource Today
Students in Advanced Placement Statistics at Skyline High in Oakland calculate the margin of error in a problem.

Theresa Harrington/EdSource Today
Students in Advanced Placement Statistics at Skyline High in Oakland calculate the margin of error in a problem.

With less than a third of the combined students at two high schools scoring high enough to earn college credit on Advanced Placement tests in English, math and science, the Oakland Unified School District was a perfect candidate for a national program that aims to help students – especially low-income, African-American and Latino teens – improve their performance on AP tests.

Math teacher Shane Durkan especially welcomed extra help from the program, after only eight of his 33 students scored high enough on the AP Statistics test to earn college credit this past spring.

Although he has taught math for four years, last year was his first time teaching statistics. “I had never seen students interact with the curriculum,” he said. “If you haven’t taught it, you have no idea how students are going to react to it.”

This year is different, he said, in large part due to the Oakland school district’s participation in the nonprofit National Math + Science Initiative’s College Readiness Program, which aims to increase the number of students taking and earning qualifying scores on math, science and English AP tests. Students need to score 3 or higher on a scale of 1 to 5 on AP tests to earn college credit.

“We really wanted to improve our college readiness and college success,” said Bernard McCune, the district’s deputy chief of postsecondary readiness. “Part of the way we as a district do that is to make sure that our students have access to the most rigorous courses. (The initiative) helps in the sense that it can provide teachers with top-flight professional development.”

Besides intensive teacher training and mentoring, the initiative also offers Saturday study sessions for students. In addition, it provides resources to both teachers and students, such as test-prep books, calculators and mock tests.

The program also pays a portion of the students’ cost to take the AP tests and awards teachers $100 for each passing score, plus a $1,000 bonus if a certain percentage of students in specific classes score 3 or higher. Each student who scores at that level also is awarded $100.

In addition to earning college credit, students may qualify for advanced placement in college courses if they take AP classes.

Durkan said training he has received through the program has improved his teaching. And the ongoing mentoring has given him new ideas for using engaging activities with his classes “to introduce them to topics and really hook them.”

“Without a doubt,” Durkan said, “I’m a better teacher this year.”

In the classroom, he interests his students in statistics with fun activities or problems relevant to their lives.

To help them understand “confidence intervals,” he turns to snacks that teens love to eat. He fills a large plastic bag with a mixture of regular and pretzel “Goldfish” crackers, then pours out smaller portions into individual bags and asks students to estimate the percentage of each type of cracker in the large bag based on the numbers they see in their smaller bags. They then calculate how confident they are in their estimates based on the size of their samples, knowing that the accuracy is greater when the sample size is larger.

“That’s how you have to teach it so students get it,” said Durkan. “If you’re doing PowerPoint lectures, they’re going to have a hard time. You have to let them struggle and then work through it and discuss it.”

The program is focused in parts of the country where science and engineering industries drive the economy and is funded by a U.S. Department of Education Investing In Innovation grant.

After seeing improved scores in more than 725 high schools over the past three years in 34 states, the initiative received a nearly $20 million “Scale-Up” grant to expand to 10 new districts this year, including Oakland Unified.

Across the country, districts are offering AP classes at nearly all schools, not just the top-performing campuses, to better prepare students for college.

The program also launched this year at San Pedro High in Los Angeles Unified, Desert High in Muroc Joint Unified and at the KIPP San Francisco College Preparatory charter school in San Francisco. Serra High in San Diego Unified and Lemoore High in the Central Valley are the only California schools that have already completed the program.

Oakland started the program at two of its seven comprehensive high schools this year – Skyline and Castlemont – where a majority of students are low-income and/or African-American or Latino. Thirty-eight percent of Skyline students scored 3 or higher on AP tests in math, English and science last year, while just one Castlemont student out of 38 who took tests in those subjects scored 3 or higher. The district plans to add the program at Oakland High next year.

McCune said the schools were chosen based on the number of students taking AP classes and their low passage rates. Program spokesman Juan Elizondo added that schools “are selected based on a range of criteria, including the ability and willingness to make changes and to commit to the three-year program.”

Although Skyline and Castlemont required students to apply and show that they had taken the necessary prerequisites to take AP courses, only 31 percent – or 61 of the 194 students who took AP tests in English, math or science subjects at both schools combined last year – scored a 3 or higher.

This year, Skyline expanded its Advanced Placement course offerings in English, math and science from seven to nine.

And the Statistics course is even more popular than it was last year. Durkan said he reached out to some students who might not otherwise have considered taking his course, boosting enrollment to 41 students in his two class periods.

The Saturday sessions offered three times a year through the program have reinforced concepts to his students, while the new materials have given them a better idea of the kinds of questions they can expect on the test and how they will be scored, he said.

Students said they appreciate Durkan’s instruction because he helps them to understand what they need to do to solve a problem without actually giving them the answer.

“I wanted to challenge myself in math,” said Hillary Miranda, 17, who previously studied math with Durkan. “That’s not my strongest subject. But he told me to get into this class to try it out. It’s challenging, but it’s not as difficult as I thought it would be.”

Jedidiah Burton, 18, said the Saturday classes gave students an idea of what would be covered in the future.

“Overall, I think it really does help because it gives us a sense of what we can expect and what we need to remember most,” he said. “I feel well-prepared.”

Justin Ruderman, 17, said he appreciates Durkan’s focus on applying what students are learning to real-life situations.

“A lot of times in school, we learn things we’re not going to use ever again,” he said. “But stats is not one of those. This is very useful.”

Statistics come up often in public agencies like police departments, Durkan told his students, when they studied a poll gauging public confidence in police. This is because governments and businesses that serve the public want to find out if their efforts are appreciated or if they need to make changes, he explained.

“That’s why you’re going to see stats in most any industry you walk into,” he said. “Whether you’re a doctor, whether you’re a lawyer, or you’re a mechanic…. You’re probably going to be using stats.”

As students anticipate this year’s AP tests, they have a high bar to meet if they want to replicate the success of students in other schools participating in the program. After one year, the average increase in the number of qualifying scores for those schools was 67 percent, according to the initiative’s 2015-16 results. African-American students’ scores increased 83 percent on average, and female students’ scores increased 64 percent.

Durkan said he’s hoping for an 80 percent pass rate this year. He’s not predicting 100 percent in part because some of his students needed help improving their advanced math skills.

McCune said the district is working to challenge students academically – not only in high school, but also in elementary and middle schools – to better prepare them for high-level coursework. The district also plans to offer time for AP teachers to collaborate with each other districtwide, he added.

“Our goal is to be even better than the schools in those other states,” he said. “Our students are just as bright – or brighter – than any students in the country, so there’s no reason we shouldn’t have similar or better results.”