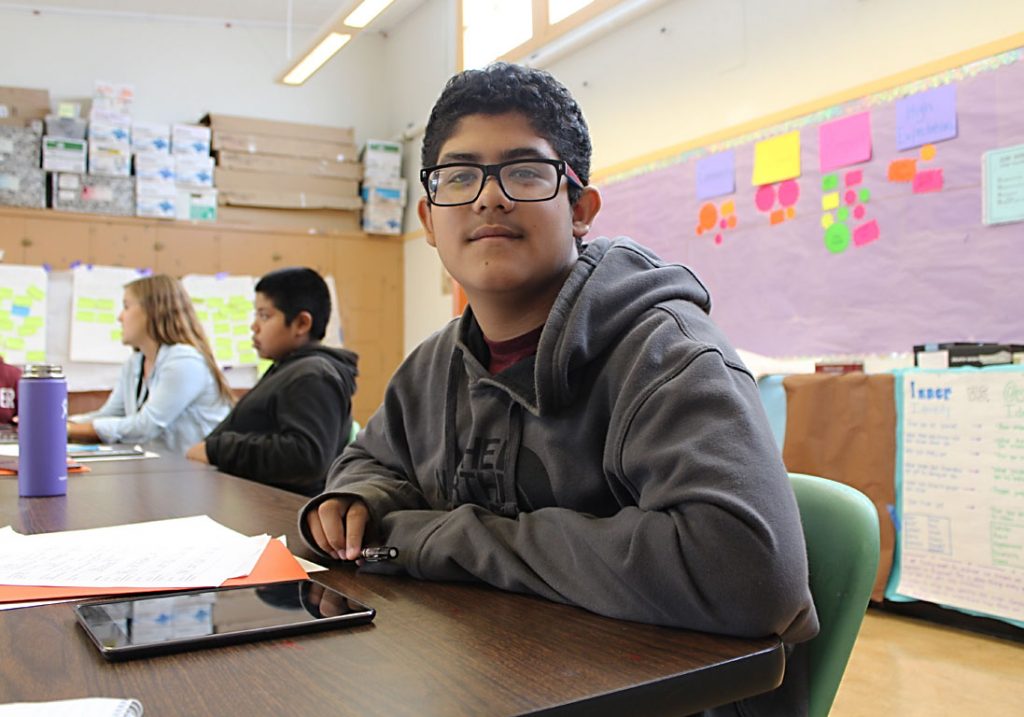 What Omar Quinitanilla, 12, liked best about summer school was the worrying. Not his own worrying, which he addressed during a second period “Issues and Choices” class by charting a path from high school to an engineering Ph.D. He relished the concern that teachers at Aim High in Oakland directed at middle schoolers during a five-week session of math, writing and conversation circles about the important stuff — how to take a deep breath and figure out who you want to be.

“Every single time we go on a field trip, they worry about you,” Omar said, sounding a bit incredulous. “Safe” is how it made him feel, he said.

Creating places that feel safe for students has been the raison d’être of summer programs like Aim High, as it has been for hundreds of after-school programs in school districts across the state. Yet for many school principals who are casting about for ways to improve students’ sense of physical and emotional safety — and in doing so, students’ interest in being at school and learning — the  idea of calling on summer school and after-school experts hasn’t occurred to them. But that is starting to change.

They are finding common ground in social and emotional learning, an organized method of teaching students behavioral expectations, self-management and relationship skills that is gaining traction nationally and in California.

“Social-emotional learning is the DNA we share,” said Michael Funk, director of the Expanded Learning division of the California Department of Education that works with programs that run before school, after school and during the summer, known collectively as “expanded learning” programs.

Funk is on a mission to educate school officials on the history of high quality after-school and summer programs, including the fact that 27 years ago, after-school programs adopted “positive youth development” standards. Those standards are similar to what schools are redoubling their efforts to obtain today, prompted by Common Core State Standards that call for more collaborative classrooms and a new state accountability system that pushes schools to do a better job of addressing student behavior and chronic absence. The standards, which have become the benchmarks for program evaluations, include safe and supportive environments, opportunities for students to speak up about what’s important and curriculum that is personally meaningful.

“This is what we’ve been held accountable for in evaluations,” Funk said. “You’d have people walking around asking kids, ‘Do you feel safe here?'”

Staff-student relationships have been the foundation for learning at Aim High since 1986, when it began offering free math, science, humanities and youth development classes to students from low-income families. For Omar, social and emotional learning includes trusting classmates and staff. “If you share something, it will always stay in that circle,” he said.

Six districts in the CORE consortium, a group of eight California school districts that obtained a federal waiver to create their own school accountability system, are working to integrate social and emotional learning throughout the day, including in the hours from after-school to 6 p.m. Including after-school programs was a novel idea, said Katie Brackenridge, vice president of programs for the Partnership for Children & Youth, an Oakland-based nonprofit that is working with the districts.

“They weren’t thinking about how they could use that time and the resources and staffing to promote the social-emotional learning they were doing,” Brackenridge said. She held up the San Francisco Unified School District for the close collaboration it has created between its after-school programs and the social-emotional learning outcomes its staff works on during the day, such as improving students’ ability to manage their time and emotions. And the Pomona Unified School District announced this month that it has adopted a social and emotional learning program, Wings for Kids, for its after-school programs throughout the district. Pomona Unified is building on the expertise of 21 site coordinators who are trained on both Wings for Kids and the social programs used during the day.

This kind of collaboration makes sense, Brackenridge said. Not only do after-school programs have experience with teaching social skills, they have some funding.

California leads the nation in its investment in after-school programs because of voter-approved Proposition 49, also known as the After School Education and Safety Program, a project of actor Arnold Schwarzenegger prior to his election as governor in 2003. Passed in 2002, Prop. 49 guarantees before and after-school programs funding, which now amounts to $550 million a year. Proposition 98, a 1988 voter-approved education funding measure, directs an additional $50 million into after-school programs for the 2017 fiscal year. Federal funding for the 21st Century Community Learning Centers would add $136 million to the budget, but that funding has not yet been approved by Congress.

“It’s been really eye-opening to the school day folks to see what’s possible in after-school and summer programs,” said Brackenridge, who is a California representative to the Collaborating States Initiative, a nationwide effort to explore how to set goals for social skills. She’s also co-chair with Funk of a statewide planning team that looks at social and emotional learning in after-school and summer programs.

In the classrooms of the Urban Promise Academy in East Oakland, a summer campus for Aim High, 6th-graders sat on desk tops or stood leaning against desks in a circle and took turns reading anonymously submitted questions about middle school life — questions written down on white-lined paper and balled up. A girl with short dark hair smoothed out the paper and read the question: “Is it going to be easy to make friends?”

Their teacher, Victoria Bravo, threw the question back to the students in class, many of whom had come to the Aim High program without knowing anyone. “Raise your hand if you made a friend you didn’t have in elementary school,” Bravo said. Every hand drifted  up. “Look at each of you!” Bravo said. She shot a look at her co-teacher. “That was our big goal!” she said.

In an 8th-grade classroom, students worked in groups on a project they’d chosen on immigration. They were learning to advocate for themselves and work collaboratively. “We have a list of demands,” said Adrian Terriquez, 13, as his partners Froylan Reyes, 13, and Joslyn Barron, 12, took turns typing up a letter to President Donald Trump on a laptop. “We want the world to change,” Adrian said.

Malik Beale, a co-teacher and a student at Merritt College, had been an Aim High student himself and was effusive about its impact. “It brought out a side of me I never thought I had,” he recalled. “It helped us create our own identity.” One of his memories from Aim High this summer is watching a film about police violence with the students. The movie included an image of a protester holding a sign that read “Am I Next?” “It really hit home for me,” Beale said. “They even got to see me crying,” he said.

Tabiti Gibson, a site student support specialist for Aim High, said the best part of school, during the summer or otherwise, is resolving conflicts — student and student, student and teacher, teacher and teacher. “Every conflict I have, I get excited,” he said. Lowering his voice, he said he’s not supposed to admit that. “I have to look serious,” he said, arranging his face in a sober expression.

Gibson is part of a recent effort to bring “restorative practices” into the Aim High summer program as a way to resolve conflict. “Every time there’s a conflict, the healing is the magic,” he said. “Nobody’s bad. As soon as the first apology comes out, it pours out. That’s when healing begins. We all want good relationships.”