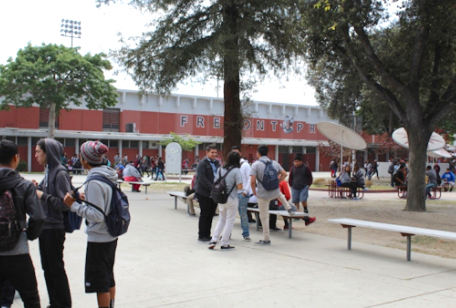 Alliances of charter school groups and labor unions are competing for control of California’s largest school district, raising most of the $6.6 million contributed to date to benefit candidates in three school board races.

The “big battle in L.A. has been whether or not to approve charter applications, and the current board has been slowing down the rate of approval of charter schools and demanding greater oversight and accountability,” said Raphael J. Sonenshein, executive director of the Pat Brown Institute for Public Affairs at CSU Los Angeles.

Los Angeles naturally commands outsized interest from advocacy groups, both in California and nationally. It’s home to the state’s largest school district, the Los Angeles Unified School District, and home to 279 charters, the most of any district in the country. A plan in 2015 to create 260 charters over eight years won the support of philanthropists and wealthy donors.  It also deepened the rancor between charter supporters and critics.

As a result, the three school board seats up for grabs Tuesday in the Los Angeles primary elections are attracting a who’s who of major donors and well-heeled organizations trying to shape the agenda of the seven-member school board. If candidates backed by charter allies win all three seats on Tuesday, L.A.’s board will have a majority of members who received significant contributions from charter political groups.

An EdSource analysis of Los Angeles City Ethics Commission campaign finance data shows that groups aligned with charter schools have contributed most of the $5.37 million in marketing and get-out-the-vote efforts on behalf of the candidates by outside groups– roughly $3.34 million to labor’s $2 million. Another $1.3 million were raised by the candidates themselves through March 1. Candidates are able to raise money directly, though those donations are capped at $1,100. Outside groups can spend unlimited sums.

If no candidate receives more than 50 percent of the vote, the top two finishers in each district will square off in a May 16 runoff. Elected board members receive an annual salary of $45,000.

“The unions are the people who are supporting Zimmer. And the unions have no respect for the children of the schools,” Riordan told EdSource. “He was against firing teachers who are incompetent. How can you run a school if you tolerate the worst teachers?”

Riordan said he supports charters because they can more easily replace ineffective teachers. “The vast majority of the charter schools do not have unions,” Riordan said “And therefore they can hold teachers accountable for doing a good job. If a teacher doesn’t do a good job, they’re fired.”

“What’s actually true is that we have dismissed more teachers for poor performance in the last five years than we did the previous 20 years combined. I don’t celebrate that,” said Zimmer.

The conservative-leaning Fordham Institute in a December 2016 report compared LAUSD and 24 other districts on a range of policy issues, concluding that it “is more difficult to dismiss an ineffective teacher in the Los Angeles Unified School District  than almost anywhere else in the country.” The report determined it takes three to six years to fire a veteran underperforming teacher.

Also in the mix is the California Charter Schools Association (CCSA). The statewide advocacy group is a major player in California campaign spending, having put up more than $12 million for candidates of various offices and other issues in 2015 and 2016, according to state election data. The charter group and its affiliates have received large contributions from billionaire donors in that time, including $4.2 million from Gap clothing company co-founder Doris Fisher, $3.95 million from Netflix co-founder Reed Hastings, more than $2 million from three members of the Wal-Mart family fortune — Alice Walton, Carrie Penner Walton and Jim Walton — and $1.05 million from former New York City Mayor Michael Bloomberg, according to an EdSource review of state campaign finance records.

For this election, the charter group has contributed $715,000 to benefit L.A. school board candidates and another $1.29 million through its affiliate, The Parent Teacher Alliance.

In the opposing corner are labor groups, led by United Teachers Los Angeles (UTLA) with big assists from the national American Federation of Teachers and the local Service Employees International Union.

Asked why the charter association is active in the upcoming election, spokesperson Richard Garcia said the Los Angeles school district is “a barometer of policy creation” statewide. He said the charter group, “will work with and support candidates who have the best interest of all public school students and who value choice in education.”

Labor groups say the charter association’s involvement in board races across the state has led to an uptick in spending. “We have seen an increased spending when CCSA is in the race,” said Cecily Myart-Cruz, vice president of the L.A. teachers union.

Zimmer, an adjunct instructor at Occidental College, who’s been re-elected twice to his district four seat, and Imelda Padilla, who’s running for an open district six seat, are endorsed by the L.A. teachers union. Both have benefited from $1.5 million in labor spending for Tuesday’s race.

Challenging Zimmer is Nick Melvoin, a 31-year-old education nonprofit consultant and adjunct professor with a law degree from New York University. He’s endorsed by the state’s charter school association, which has contributed just over half a million dollars on behalf of his campaign.  He’s also secured the endorsement of Riordan and former Democrat L.A. City Mayor Antonio Villaraigosa, among others. Two other candidates are also running against Zimmer, Gregory Martayan, who runs a public relations firm,  and Allison Holdorff Polhill, former board member of Palisades Charter High School, a unionized charter. The charter group has spent $258,000 on Polhill’s campaign. Martayan has no outside group financial support, records show.

But while the money pits charter supporters against unions, the issues dividing the candidates are complex and varied.

When it comes to charters, the 2014-15 school year represented the fewest number of approvals — and the lowest rate of approvals — by the board in four years, according to a district report. Numbers for the 2015-16 year are incomplete. However, the number of applications submitted for new independent charters dipped from 43 to 26 between 2011 and 2015.

“The relationship between charters and the district is fundamentally broken and the reason we’ve had such exponential charter growth is because of the lack of leadership and understanding what this new ecosystem looks like,” said Melvoin. “I’m a proponent of different school models, of more localized decision making, and of seeing how these things are an asset to kids. And I think Steve sees it as a detriment.”

The Los Angeles Unified School District faces $13.4 billion in pension liabilities at a time when enrollment in the district is declining – and with it valuable state funding. The district also faces a possible $1.46 billion budget deficit through 2019, and foes of Zimmer are blaming him for the fiscal woes.

The charter association and the Service Employees Union International have each contributed about $150,000 on behalf of Monica Garcia, the second district incumbent who is being opposed by two candidates, adding to the $220,000 she’s raised herself. Her opponents have raised just $16,000, with no outside support.  Another $609,000 from the charter group’s affiliates has gone toward Kelly Gonez’s campaign, another candidate for the open district six seat.

If the most recent election like this one is a prologue, the millions raised for these races will be spent to influence a tiny portion of L.A.’s registered voters. In 2013, the last time the mayor’s office was on the ballot, voter turnout in the city’s primary election was 18% of registered voters and election watchers are predicting a similarly low turnout this year. Voters will also be casting ballots for mayor, city attorney, city controller and council.

Also up for debate is who’s responsible for the escalation in campaign spending. Labor groups point the finger at pro-charter groups, which they often label as “privatizers,” meaning they support private companies running public schools. Organizations backing the interests of charter schools say they began spending more to compete with labor’s arsenal of cash.

The ratcheting up in spending “goes back to when Richard Riordan was mayor” from 1993 to 2001, said Sonenshein, “because he really began the notion of creating this reform counterforce in the school district, and he put a lot of money into it, and he essentially elected a majority of the school board.”

The result was a sharp drop in direct contributions and a spike in outside group spending. In 2011, the candidates for the four school board races raised only $742,917, while outside groups poured in $4.7 million of which $2.9 million came in during the primary. In the 2013 and 2015 races, outside groups spent a combined $11.4 million, of which $7.2 million funded the primaries. Candidates themselves raised $2.4 million.

Money alone doesn’t always swing an election, though. In 2013 Monica Ratliff defeated Antonio Sanchez even though his campaign received more than $2 million in donations while she garnered just shy of $90,000. Sanchez had both labor backing and support from education reformers, including Riordan.

One reason for the growth in costs is the increased sophistication of campaigns themselves, said Garcia, the charter group spokesperson. “[N]ew platforms like email, text, social media and other web-based means to reach voters [are] making it necessary to increase expenditures for a given campaign.” And because California has an active voting cycle — local, state and federal races plus the propositions – the competition for voters’ attention lifts the price tag on campaign spending even more.

And both sides appear determined to continue using money to advance their causes.

“There’s a lot of indignation to go around,” said board candidate Melvoin. “No side is going to unilaterally disarm.”