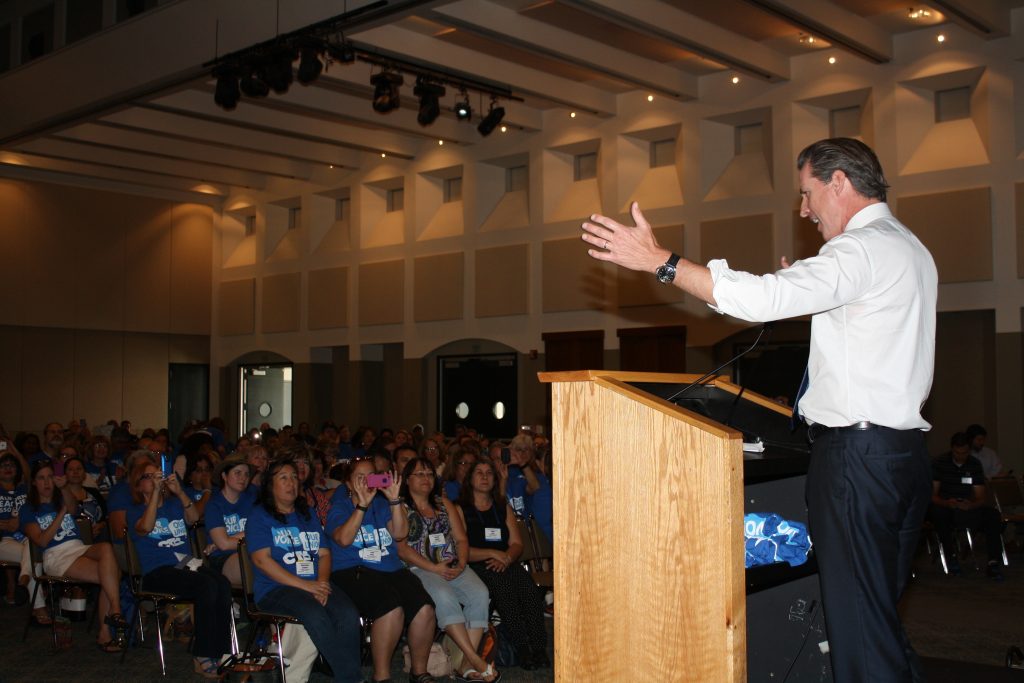 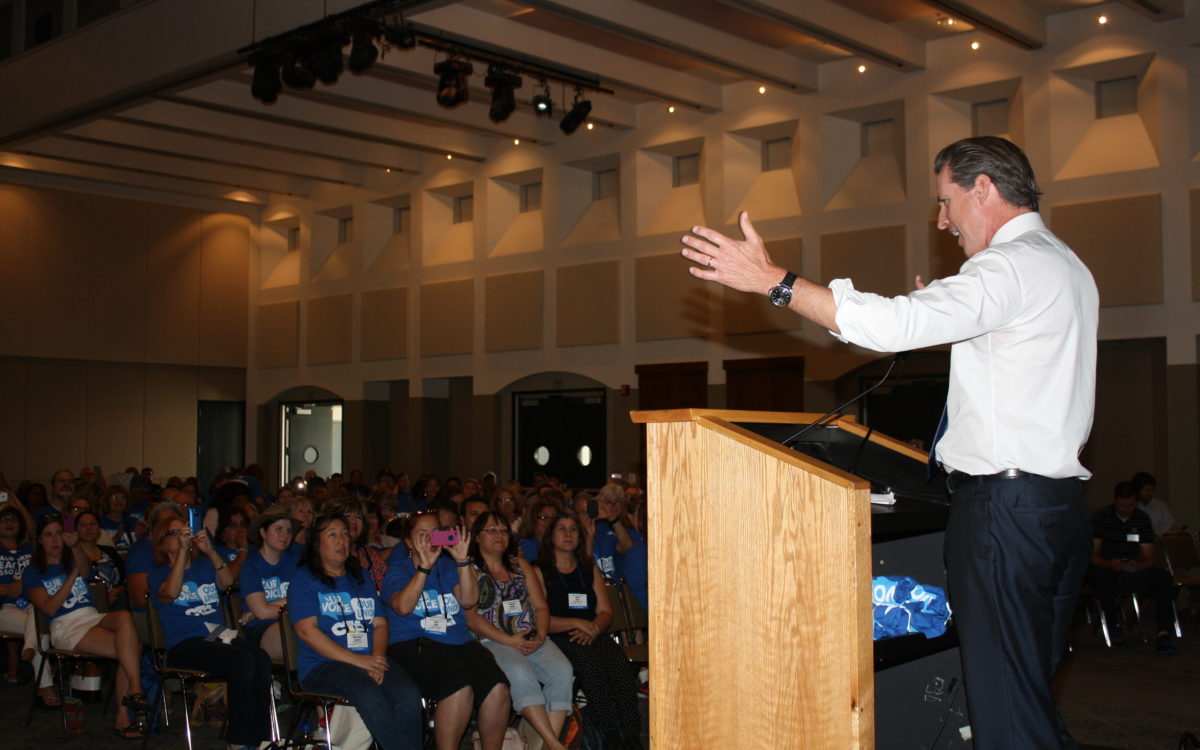 California Lt. Gov. Gavin Newsom got a major boost in his bid for governor next year when he received the endorsement of the California Teachers Association over the weekend, as did Assemblyman Tony Thurmond, D-Richmond, who is running for State Superintendent of Public Instruction.

In addition to Newsom and Thurmond, the CTA also endorsed incumbent Attorney General Xavier Becerra, who is running for re-election after being appointed to the post by Gov. Jerry Brown in January, State Board of Equalization member Fiona Ma for State Treasurer and state Senator Ed Hernandez, D-Azusa, for lieutenant governor.

The CTA’s State Council of Education, the top governing body of the 325,000-member organization, made the endorsements at their meeting in Los Angeles.

The CTA is one of the largest — and often the largest — single contributor to key statewide candidates or independent expenditure committees working on their behalf. It is a rule of thumb of California electoral politics that winning key statewide offices is immeasurably more difficult without the support of the CTA and its key allies in the labor movement. That is even more the case in the current political climate where the chance of a Republican winning statewide office in California is virtually zero.

The endorsements did not come entirely as a surprise. Newsom is currently the front runner in early polls, as well as the leading fundraiser in the race so far. His leading opponent, former Los Angeles Mayor Antonio Villaraigosa, early in his career worked for the United Teachers of Los Angeles and as a consultant for the CTA, but has been a harsh critic of the teachers unions on numerous issues over a period of many years.

As for Thurmond, the former Richmond city councilman and West Contra Cost Unified school board member is facing off against Marshall Tuck, who was founding CEO of the Partnership for Los Angeles Schools, a nonprofit operating 16 Los Angeles Unified schools closely allied with Villaraigosa, and before that, was president of Green Dot Public Schools which operates 20 charters schools in the LA area. The CTA opposed Tuck in his previous campaign against the CTA’s choice in 2014, incumbent State Superintendent of Public Instruction Tom Torlakson. Like Gov. Brown, Torlakson will be termed out of office next year after serving two 4-year terms.

The CTA typically endorses candidates in March before California’s June primary, but this year did so much earlier in the electoral calendar. That’s primarily because it is likely the state superintendent’s race will be decided next June, which is less than eight months away.

This is a non-partisan race, so whoever gets more than 50 percent of the vote at the ballot box next June will not face a runoff election in November, and will automatically become superintendent. With only two major candidates in the race — Tuck and Thurmond — it is virtually assured that one of them will get more than 50 percent in the June contest.

And if it is anything like the 2014 contest, it will be hard-fought and hugely expensive.

In that race, Torlakson narrowly defeated Tuck by a margin of 52.1 percent to 47.9 percent. A record-breaking $24 million was spent by the two races combined, making it by far the most expensive superintendent race in California’s history, as well as the most expensive one on the 2014 ballot, exceeding spending on the governor’s race by a 3-to-1 margin. The CTA contributed at least $7 million to Torlakson’s campaign directly or to independent expenditure committees backing him.  Electing Thurmond could be even tougher because he does not have the benefit of being an incumbent, as Torlakson was.

Newsom is one of about 40 candidates from all parties or independents who have filed papers so far to run for governor. In addition to Villaraigosa, the most prominent Democratic candidates are State Treasurer John Chiang and former State Superintendent of Public Instruction Delaine Eastin. The top two vote-getters from either of the two major parties will then face each other in the November general election.

Newsom’s views on charter schools appeared to play a major part in securing the CTA’s endorsement. In response to the growing number of charters, who now enroll 1 in 10 of the state’s public school students, teachers unions have launched a major campaign to demand greater transparency in the financing and operations of charter schools, as well as to limit their expansion in the state.

CTA President Eric Heins pointed to Newsom’s support for increased funding for education, and for a public education system “that attracts, not attacks, teachers.”

But Heins especially lauded Newsom’s opposition to “the proliferation of charters, especially those run by private management companies who want to profit off our kids. Gavin has seen the waste and abuse by some charter operators and is committed to making it stop. He believes all charters must provide equal access to ALL students and that the decisions about authorizing a charter school must be made locally, by local school boards.”

Three weeks ago at the Birth to Five Water Cooler produced by Advancement Project California, which included discussions with leading gubernatorial candidates, Newsom said he was “vehemently against” private for-profit charter schools, and that more scrutiny is needed of how the growing charter school sector is spending public funds.

“I am not ideologically opposed to charter schools, and there are some extraordinary charter schools out there,” Newsom said. “But I am all about accountability and transparency. It is public money, and we need to be accountable for that.”

“We need to take a good look at some these out-of-state charter management organizations, who are not necessarily performing as well as they should or as accountable as they should be,” he said. “There has been enough evidence of significant abuse, self-dealing, conflicts that deserve scrutiny and frankly are not getting enough scrutiny as I think some of the organizations should.”

Thurmond’s position on charter schools also was influential in securing the CTA’s endorsement. Heins said that Thurmond was the “most qualified” candidate, but also pointed to his views on charter schools, underscoring the extent to which they have become a contentious issue in the state.

“With more than 1,200 charter schools operating in California and all the recent accounts of charter waste, fraud and abuse hurting our students, we need someone who is going to put kids before profits,” Heins said. “Thurmond’s priorities are the opposite of his opponent, Marshall Tuck, who supports the proliferation of privately run charter schools and who received millions in donations from his Wall Street backers during his failed 2014 bid.”