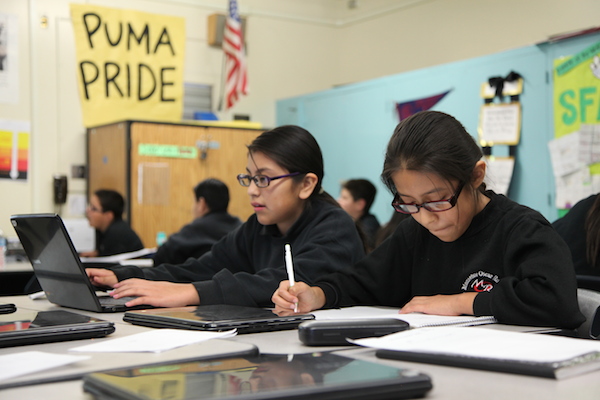 A bill that would have allowed only school districts to approve new charter petitions is very much alive despite being shelved Monday by its sponsor.

The bill known as Senate Bill 808 got a burst of support Tuesday from the Los Angeles Unified School District Board of Education, which voted 4-3 in favor of a resolution supporting the bill plus two others that charter advocates consider anti-charter.

The vote came after vigorous appeals from charter supporters to defeat the resolution.

SB 808 is one of three pieces of anti-charter legislation championed by the state’s largest teacher’s union, the California Teachers Association. The bill limits the ability of charter schools to open new campuses or renew existing agreements by requiring them to seek approvals to operate from local school districts only. The bill would also greatly limit the appeals process if a district turns down a charter.

Charter supporters argue that the bill will lead to the shut down of many charters since they must get renewals every five years.

Union spokeswoman Claudia Briggs reiterated that SB 808 is not dead and instead will follow a two-year timeline in the current legislative cycle.

The bill’s author, Sen. Tony Mendoza, D-Artesia, tabled the bill rather than call for a vote on Wednesday when it was due to come before the Senate Education Committee. Mendoza is expected to appear Monday at the Capitol with the California Teachers Association leadership to reiterate his support for the bill. Authors of the two other bills the union is supporting will also speak.

The sector now enrolls about a 10th of the state’s 6.2 million public school students.

California Teachers Association spokesman Frank Wells said Los Angeles Unified board’s vote of support for the bills matters because the district has the most students in the state and second-most in the country. “Their support is important because it is based on an extensive history with charter schools and their ramifications,” he said. “As a board authorizing more charter schools than any district in the country, they have a tremendous amount of firsthand experience and expertise related to the transparency and access issues that these laws would address.”

District lobbyists will advocate for the three bills as they go through the legislative committees in the Capitol, said Shannon Haber, spokeswoman for L.A. Unified.

However, the main opponent of the bills, the California Charter Schools Association, dismissed the Los Angeles Unified board’s resolution as political theater that won’t have an impact on the legislation.

“There is spectacle and then there’s the legislative process,” said Carlos Marquez, senior vice president of government affairs for the association. “The L.A. Unified resolution doesn’t change the progress that we’ve made with the three authors,” including Mendoza.

Mendoza tabled the bill following a rally and meeting last week with the charter group.

Marquez said the California Teachers Association is pushing this bill as part of its strategy to galvanize its roughly 300,000 members. That, in turn, “force[s] us to expend political capital in killing their frivolous legislative solutions,” he said.

The bill is putting a spotlight on the split over charter schools in L.A. Unified, which has 279 charters and enrolls more charter school students than any other district in the country, according to a fall 2016 report.

The charter issue dominated the board’s March primaries, which saw political spending by outside groups jump to $5.37 million on behalf of the candidates – roughly $3.34 million from charter-backed organizations and $2 million from unions.

The general election vote this May – with two seats up for grabs – could tilt the board to pro-charter.

Steve Zimmer, the board’s chairman, voted for the resolution on the three bills. He has the financial support of labor unions and is in a tough reelection fight against Nick Melvoin, who had attracted just over half a million dollars in donations from charter groups ahead of the March primaries. Melvoin told EdSource he would have voted against the resolution were he on the board. The other seat in May’s race has no incumbent.

As of Thursday, the two run-off races have already attracted more than $2.2 million in outside campaign spending, according to the Los Angeles City Ethics Commission campaign finance data. Much of that money has come from either charter groups or teachers unions, though pro-charter philanthropist Eli Broad and the local Service Employees International Union have also contributed.

While political spectators focused most of their energies on SB 808, the two other bills – Assembly Bill 1360 and Assembly Bill 1478 – also have the charter association on edge.

Assembly Bill 1360, introduced by Assemblyman Rob Bonta, D-Oakland, would create new regulations charter schools would have to follow when attempting to expel or suspend students. It also states that charter school parents cannot be required to volunteer for school activities. The California Charter Schools Association last year successfully swatted down a similar bill, Senate Bill 322, which passed in the Senate but lost in the Assembly. Charter backers contend the bill infringes on their state-mandated freedoms; teachers unions and their allies say some charters get away with discriminatory enrollment and disciplinary practices.

Assembly Bill 1478, introduced by Assemblyman Reggie Jones-Sawyer, D-South Los Angeles, is part of an ongoing disagreement between charter advocates and their opponents over whether conflict-of-interest laws apply to charter schools. The bill would ban board members from having any financial dealings with the schools on whose boards they sit. The charter association argues this would harm the financial health of charter schools that sometimes rely on generous loans or property leases from their board members. The bill passed its first test in the Senate Education Committee this month.

Last year, Gov. Jerry Brown vetoed a bill similar to AB 1478 by saying the proposed law went “too far in prescribing how these boards must operate.”

A separate bill championed by the charter schools association, SB 806, introduced by Sen. Steven Glazer, D-Orinda, would apply a different governance code to charters, one that the charter group says would allow board members to help their schools financially. It passed out of the Senate Education Committee Wednesday.