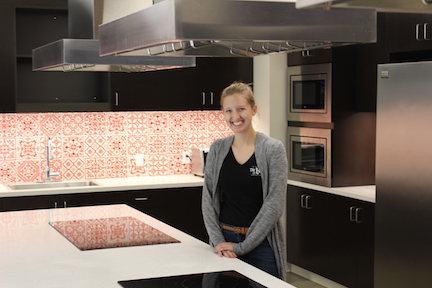 Finishing touches were still being put to Cal State Channel Island’s new 600-bed dormitory named Santa Rosa Village when Jazzminn Morecraft moved in last fall.  Early morning construction noise was worth enduring, she said, because of the social and academic benefits of living on the Ventura County campus, situated in a former state mental hospital surrounded by farmland and hillsides.

Whether joining a study group in her dorm, taking a quick walk to the library, attending a concert, “all the opportunities are here, the events are here. It’s a great experience,” said the English major who graduated from a high school in the San Ramon area east of San Francisco.

New construction in the CSU system is adding beds so more students can live on campus. Experts say this could improve their chances of finishing college in four years, along with less costly academic steps such as improved advising and providing more classes. And by offering an alternative to rapidly rising off-campus rents in some parts of the state, the new dorms are expected to enhance a residential flavor at campuses traditionally dominated by commuters.

The Great Recession had stalled many previous CSU plans but, with economic recovery, about 1,000 beds were recently added and dorms with an additional 5,000 beds are approved to be built over the next four years. That work will be at seven campuses, with expansion being considered in the future at those and others.

The CSU system now has on-campus room for only about 11 percent of its 400,000 students. The projects already in the pipeline would increase that to about 15 percent, still a modest amount although some campuses will be able to accommodate about half of their undergraduates. (In sharp contrast, the University of California system already can house nearly 40 percent of all its undergraduates and has its own ambitious dorm construction plan mainly to keep up with enrollment growth.)

The reasons for building new dorms are both financial and academic, officials say.

Reversing a previous pattern, rents of off-campus apartments in some areas, such as San Francisco and San Jose, have become so high that more students view on-campus dorms as more affordable and secure.  In the most dramatic example, more than 1,360 students remain on the waiting list for university housing at San Francisco State, the school reported.

Beyond housing market pressures, CSU system’s new initiative to improve its graduation rates is pushing some campuses to look at housing as one of many steps to get students to complete school faster. (Only about 19 percent of recent full-time freshmen across CSU have graduated in four years and 57 percent in six years, a record the system is working to dramatically increase by 2025.)

University officials point to national studies that show students who live at least one year on campus tend to do better academically and persist in their studies more than those who live off-campus, although some experts have debated that effect.

Plus, overall enrollment is expanding and more CSU students are enrolling in schools in another part of the state away from home.

Adding dorms “changes the overall flavor of the institution” and provides more chances for students to connect with each other and to their studies, said Cindy Derrico, Channel Islands’ associate vice president for student affairs, while escorting an EdSource reporter on a tour of the beautifully landscaped campus. Opened in 2002, it is the newest CSU. Its recent graduation rates for full-time freshmen were 25 percent after four years about 57 percent after six

Since the Ventura County campus is surrounded mainly by farmland, few off-campus rentals are available nearby, she added, a contrast to most other CSUs.

Channel Islands’ year-old $58 million, four-story Santa Rosa Village dorm, was designed to match the California Mission architectural style (think red tile roofs) of the former hospital yet has contemporary touches such as group kitchens, computer labs, study rooms and a social hall with pool and ping-pong tables.  Its opening increased the total of campus beds to about 1600, or enough for nearly a quarter of the 6,850 students; plans call for raising that to about 30 percent in the future.

The room fee there in a double is $10,276 for the year, plus about $3,830 for a minimum meal plan. Channel Islands does not require freshmen from other regions to live on campus, a contrast to eight other CSU campuses which mandate that for freshmen, and sometimes sophomores, from far away. Such a rule might “create barriers” to enrollment in case students want to save money by living with relatives or friends or can find housing cheaper than the dorms in the wider region, Derrico said.

Other recent CSU dorm projects include a new 600-bed complex that opened in January at San Diego State, where ground is to be broken later this year on another project for 850 occupants. In August, Sacramento State freshmen and sophomores will be able to move into the new 416-bed Riverview Hall, with views of the adjacent American River.

Most of that construction was financed with revenue bonds that will be paid off through student housing fees, not general taxes or tuition.

Another financing model, partnering with a private developer who pays all building costs, is being used at San Francisco State.

Facing skyrocketing rents and scarce on- and off-campus housing, some potential freshmen, transfer and graduate students have decided not to enroll there and some students are leaving after a year or so, college officials said “We are competing with a very difficult situation,” said Jason Porth, executive director of the University Corporation, which runs auxiliary services.  The housing crisis is “impacting our recruitment rates and our retention rate, not to mention the impact that living on campus has on being successful as a student,” he said.

So, San Francisco State has contracted with a private developer to build a 516-bed mixed-use building by 2020 on Holloway Avenue across the street from campus on university-owned land.  Other projects will follow.  Now, the school can offer just 3,820 beds for its 29,045 students, 40 percent of whom come from outside the Bay Area and often wind up on housing waiting lists.  “We just can’t build fast enough and we are trying to meet the demand that’s pent up,” Porth said.

Jacqueline Foley, president of San Francisco State’s student government, had an on-campus room as a freshman athlete but has had a typically difficult time securing housing since then, she said.  She paid as much as $1,200 for an off-campus room and at one point shared a room with three other women.  After a long search, she landed a $750 a month room in a shared house in Daly City for her upcoming senior year.

The lack of housing “is a huge issue” and one that causes many sophomores to transfer elsewhere, she said.  While the international relations major is happy about Holloway Avenue plans, she said the land-strapped university should concentrate on building, buying or leasing buildings elsewhere in the city, even near downtown.  “It’s something that’s critical if they want graduation rates to increase,” she said.

To the south, Cal State Long Beach recently announced preliminary plans for a partnership with a private firm to build about 700 beds for upperclassmen and graduate students, all at least age 21, in a high-rise tower in gentrifying downtown Long Beach. The complex is expected to include classrooms for extension courses, an art gallery and a shuttle bus to the main campus.

“The demand is definitely there. We have no doubt we can easily manage to fill the beds,” said Long Beach provost Brian Jersky.  That campus now has about 2,700 beds for its 37,000 students and hopes to double the number of beds in next few years on campus or in university affiliated housing nearby.

While not as high as in San Francisco, off-campus rents in Long Beach are rising and many students squeeze in extra roommates to keep costs to no more than $600 to $800 a month per person, officials say. By the time they pay for utilities, cable and other expenses, dorms can cost about the same while providing the extra sense of community and academic support, according to Carmen Taylor, Cal State Long Beach’s vice president for student affairs. “Families want safety, community and affordability,” she said.

Traditions of living on campus vary widely around the CSU system.  At some commuter schools such as Los Angeles and Bakersfield, just 5 percent of students reside in dorms. In contrast, San Luis Obispo and Sonoma house about 40 percent. The CSU will never become a mainly residential system since students’ demographics are different from those who attend private colleges and UC, officials said.  Many CSU students have their own children and attend part-time.

Research by the National Survey of Student Engagement shows that students who live on campus spend significantly more time preparing for classes and joining extra-curricular activities and have “higher quality” interactions with other students and faculty than those who live beyond walking distance from school.

Beth McCuskey, president of the Association of College & University Housing Officers-International, which co-sponsored that research, said more colleges are trying to bolster residential facilities, although that depends on their target audience and the rental market nearby.  “Living on campus can be transformative. It can totally make the collegiate experience,” said McCuskey, who is also vice provost for student life at Purdue University in Indiana.

Isaiah Sauceda, a fourth year social work major at Sacramento State, also touts benefits of dorm life. One goal of college “is to get outside your comfort zone to figure out who you are as a person. Living with people from all different backgrounds, from all over the world, really pushes you to challenge yourself on what you believe and how you should act,” he said.  “I think that is really important for people our age.”

Sauceda, from Selma in Fresno County, has lived on campus from the start, first as a regular student and now as a resident advisor who will soon be assigned a free room in the new Riverview Hall. He wishes the university continues to build more dorms so students will “have more spirit, get more involved in activities.” Even if it is more expensive than off-campus flats, “the experience is worth paying for even if for at least one year.”

The $52 million Riverview Hall is Sacramento State’s first new dorm in eight years and is in part a response to rising enrollments of students from other regions, such as Los Angeles County and the Bay area, according to Justin Reginato, associate vice president for facilities management.  The school is changing from a commuter university to “a destination campus,” he said.

The opening will bring the total beds on campus or in university-affiliated housing nearby to about 2,500, accommodating just about 8 percent of the 30,000 students.  The campus has long-range plans to double that percentage, linked to efforts to improve graduation rates, Reginato said.

Meanwhile, at Channel Islands, Morecraft originally had planned to spend her second year in the dorm.  But for job reasons, her mother left the Bay area and moved just ten minutes away from the university.  So the sophomore now will live with her mother and commute to school, where she will edit the campus newspaper, the CI View.

She thinks she will experience the best of both worlds.  “Academically living on campus is ideal. I was very lucky and excited to be able to do it,” she said. But now she knows that living at her family’s new home “is going to save me a significant chunk of money.”