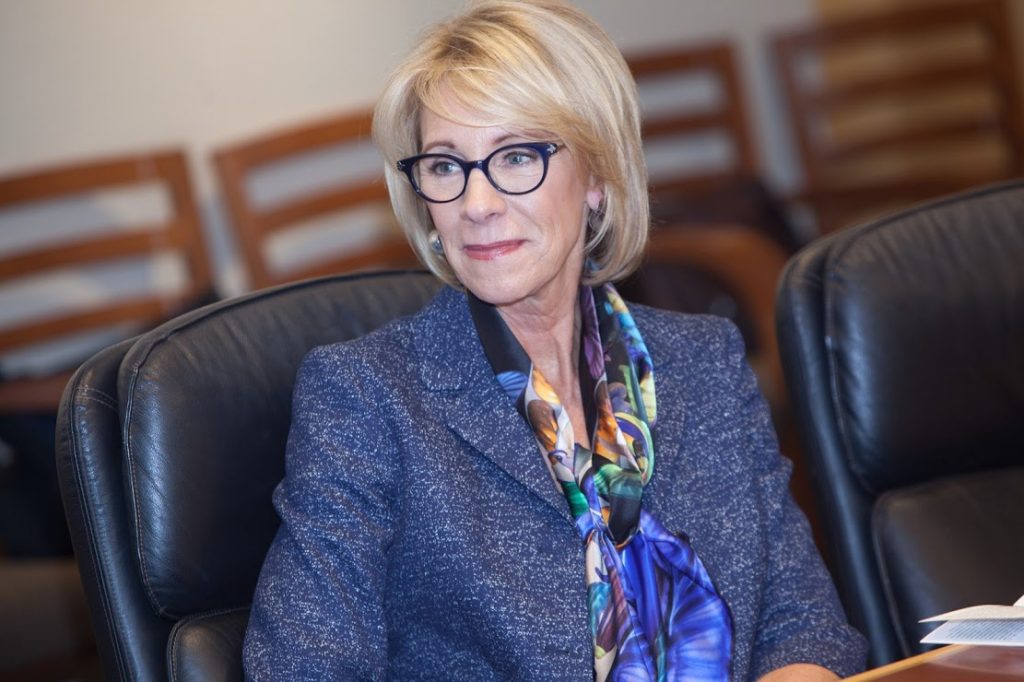 In speeches on different sides of the country on Thursday, remarks by DeVos and American Federation of Teachers President Randi Weingarten highlighted the stark division that exists between some choice advocates and those who staunchly back traditional public schools.

DeVos spoke to an appreciative crowd at a Denver, Colorado meeting of the American Legislative Exchange Council, which describes itself as the country’s largest nonpartisan group of state legislators dedicated to “limited government, free markets and federalism.” Weingarten was in Washington, D.C., addressing the union’s TEACH (Together Educating America’s Children) conference.

DeVos did not refer to Weingartens’ comments. However, she did criticize the AFT for a tweet that said: “Betsy DeVos says public $ should invest in indiv students. NO we should invest in a system of great public schools for all kids.”

Meanwhile, Weingarten characterized the rift between the two sides as “a David versus Goliath battle.” Historically, she said, school choice efforts were rooted in a desire for segregation:

“This privatization and disinvestment are only slightly more polite cousins of segregation. We are in the same fight, against the same forces who are keeping the same children from getting the public education they need and deserve. And what better way to pave the path to privatize education than to starve public schools to the breaking point, then criticize their shortcomings, and let the market handle the rest. All in the name of choice.”

This use of privatization, coupled with disinvestment, are only slightly more polite cousins of segregation. – @rweingarten #teach17

DeVos’s office did not immediately respond to Weingarten’s comment.

In her comments, DeVos answered a question about critics who allege school vouchers or choice programs “only help rich people.”

“That’s patently false,” DeVos said, adding that wealthy people can choose to move to areas with good schools or to pay tuition for private schools.

“My focus over 30 years has been to help those least able to move or to pay tuition to have the same choices I and my husband have had for our children,” she said.

Weingarten attacked voucher programs created in the past, saying research shows: “These choices do not increase student achievement. They do not reduce inequity or segregation. And they move us further away from the choice every child in America deserves — well-supported, effective public schools near their home.”