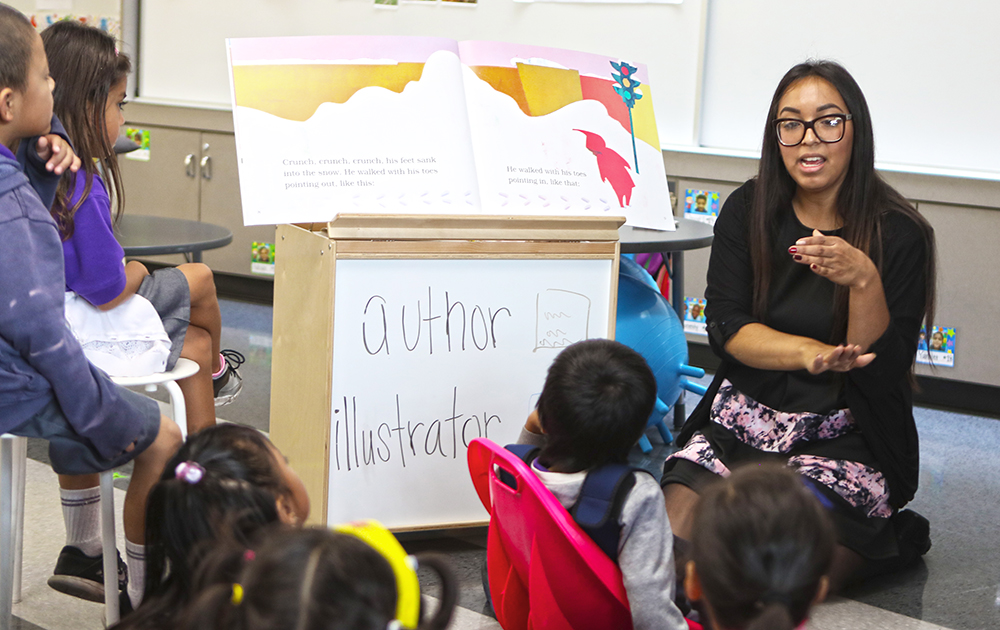 In his proposed budget for the coming year, Gov. Jerry Brown indicated that he wants California to continue addressing the statewide shortage of qualified teachers with ongoing initiatives rather than by funding new reforms.

The initial 2017-18 budget Brown released last week doesn’t include any new money to combat the state’s teacher shortage. Instead, it highlights the $35 million in programs allocated this year to help school districts recruit new teachers.

“No additional investments are being proposed in the governor’s budget, given both the investments that were made (in the 2016-17 budget) as well as the fiscal pressures now facing the state,” said H.D Palmer, a spokesman for the Department of Finance.

“That, however, shouldn’t be interpreted to mean that there are no teacher training activities that are funded and underway,” he said.

Some educators and advocates who wanted the state to fund programs that would immediately increase the number of teachers in the classroom said they were disappointed. But they’re also optimistic the state legislature could help their case by introducing bills in coming months to fund new programs. Or, the governor himself could add teacher recruitment spending if the state’s financial forecast improves later on.

Susan Henry, president of the California School Boards Association, said that without the additional state support, districts that are already struggling financially will have to continue reaching into their own pockets to offer hiring bonuses and other salary benefits to recruit enough teachers, especially in science, math and special education.

“We feel like there definitely should have been something in the new budget plan to address incentives for training and recruitment in these problem areas,” said Henry, who also serves as a board member of the Huntington Beach Union High School District.

“I can’t tell you how hard it is for us to hire a physics teacher,” she said. “We need help.”

Josh Pechthalt, president of the California Federation of Teachers, said his union is hoping to win support in the legislature.

“Clearly the governor is worried about declining revenues and he has consistently moved cautiously when proposing his budget,” said  Pechthalt. “While the teacher shortage wasn’t really addressed in his budget, it doesn’t mean that we can’t work through the legislative process to create programs that address the teacher shortage crisis.”

The initiative, which lawmakers incorporated into the 2016-17 state budget, pays the tuition and other costs for school support staff to earn bachelor’s degrees and teaching credentials.

“It’s important for the legislature and governor to take more immediate steps to address the shortage of qualified teachers as a whole, but especially in the areas of special education, science and math, and bilingual education,” said Linda Darling-Hammond, president of the Learning Policy Institute.

Brown also included $10 million in the 2016-17 budget in response to Assembly Bill 1756, which will help about three dozen colleges and universities create programs that allow students to receive a teaching credential in four years, at the same time that they earn a bachelor’s degree.

Linda Darling-Hammond, president of the Learning Policy Institute, a Palo Alto-based research and policy organization, said that while the $35 million spent on these initiatives signal a move in the right direction, they fall far short of producing enough teachers right away, and in the most needed areas.

“It’s important for the legislature and governor to take more immediate steps to address the shortage of qualified teachers as a whole, but especially in the areas of special education, science and math, and bilingual education,” said Darling-Hammond, who is also chairperson of the California Commission on Teacher Credentialing.

A recent survey of the state’s school districts conducted by the Learning Policy Institute and California School Boards Association provided a glimpse of the shortage being experienced across the state.

Of the 211 districts that responded, three-fourths said they had a significant shortage of qualified teachers for the current school year. The shortages were most severe in urban and rural districts, and in math, science and special education, according to the survey.

Darling-Hammond has previously proposed an increase in state funding for teacher residency programs, based on the medical school model of training residents. In the residencies, prospective teachers receive on-the-job mentoring from master teachers while they complete their credentialing programs. Darling-Hammond estimates that a state investment of $20 million could help school districts hire and retain up to 1,000 teachers.

For another $20 million, she said, the state could add another 1,000 teachers through forgivable loan or scholarship programs that would require teaching students to commit to three to four years to the classroom in high-demand subjects and regions in exchange for the financial assistance.

“This funding might seem like a lot, but in the overall state budget picture it’s only a small uptick,” she said. “In exchange, you would be getting a lot more teachers into the pipeline right away.”