A summer rich in history for students who looked, listened and questioned 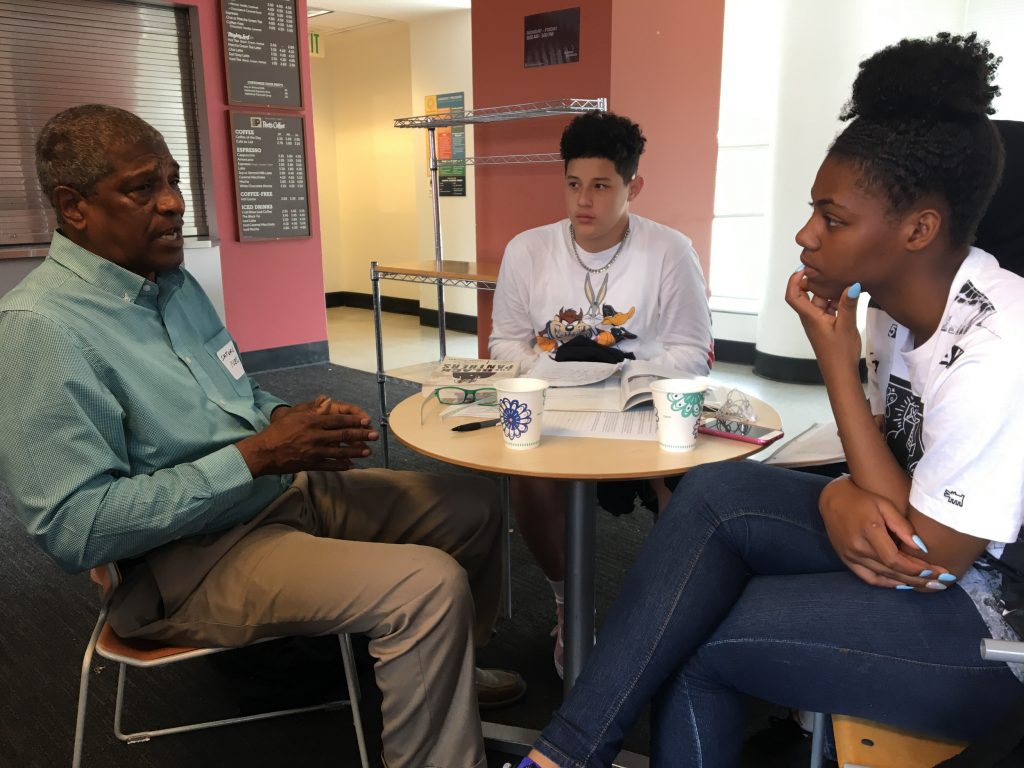 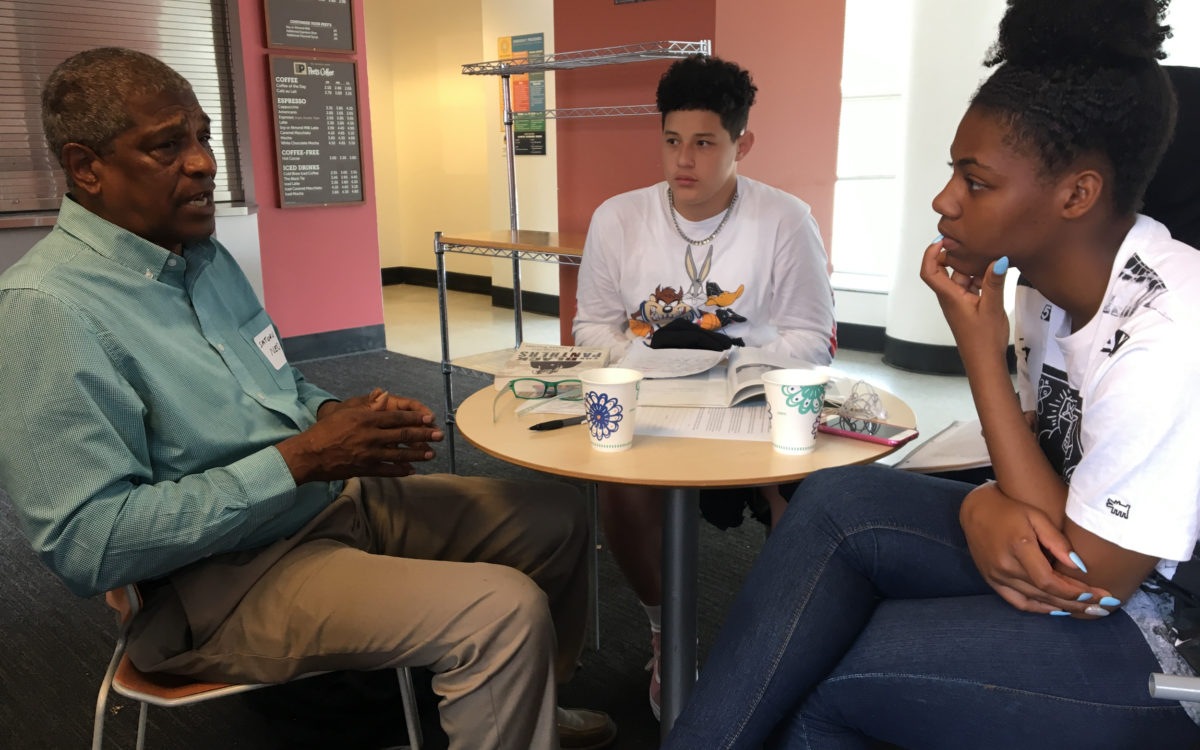 Credit: John Fensterwald / EdSource
Saturu Ned shares memories as a Black Panther leader in Oakland and a member of the Panther funk band the Lumpen with students Mouricio Palma-Martiniez and Nyla Blackman during a day of interviewing 1960s activists.

Credit: John Fensterwald / EdSource
Saturu Ned shares memories as a Black Panther leader in Oakland and a member of the Panther funk band the Lumpen with students Mouricio Palma-Martiniez and Nyla Blackman during a day of interviewing 1960s activists.

History is all around yet often invisible, with stories and sites waiting for the curious to discover them. This summer, 30 Bay Area high school juniors and seniors got the opportunity to compress lessons from four decades into four weeks of study through tangible, personal encounters with history in their own backyards.

Naomi Maruoka, a student at Castro Valley High School, saw the name of her great-grandfather at the Military Intelligence Service Historic Learning Center in San Francisco. He had been interviewed about his experiences at an internment camp for Japanese-Americans during World War II.

Jose Mascorro, who attends James Logan High in Union City, learned about his 98-year-old neighbor, Bert Perez, who worked with Cesar Chavez to organize workers and stop a highway from going through Union City. “It’s eye-opening when someone who lives close to you had a major impact in your city. I see him outside doing yard work,” he said.

Chosen from 85 applicants, the students, from 18 high schools, tracked down New Deal-funded neighborhood centers that provided jobs, hope and a paycheck during the Depression. They explored maps that showed how discriminatory mortgage practices shaped the demographics of their neighborhoods. They listened raptly as 95-year old Betty Reid Soskin, a docent at the Rosie the Riveter/World War II Home Front National Historical Park in Richmond, described heroism and racism during the war. They searched old photo albums and attics for an object, relic or family totem that visualized their family’s migration.

The students participated in Making History, a potential prototype in experiential learning developed by the UC Berkeley History-Social Science Project and funded by the Stuart Foundation. The project is part of a network of university programs that develop curricula and train teachers in historical thinking and methods. Earlier this year, the Stuart Foundation, which has made enlivening history a focus of its grants, underwrote the costs for thousands of high school juniors to see the musical “Hamilton” in San Francisco for free.

Making History’s goal, said Rachel Reinhard, the executive director of the Berkeley history project, is to help teachers explore local history “as an entry point to understand national and international trends” while giving students “new eyes for looking at the communities they live in.” She said for students from low-income East Oakland, a jumping off point for discussion might be the Oakland Community School, a free school, cherished by the neighborhood, that the Black Panther Party started on a church property at the height of its influence in the mid-1970s.

The short course included lectures and readings from historian Kevin Starr’s “Embattled Dreams: California in War and Peace, 1940-1950” and UC Berkeley professor Mark Brilliant’s “The Color of America Has Changed.” The course started with the Depression and ended with the ’60s. The culmination was a day of interviewing activists from the era — some of whom have continued as community leaders and organizers a half-century later. Being in Berkeley, a center of ferment in a turbulent decade, they weren’t hard to find.

Among them: Patti Iiyama, who spent a month in jail in 1964 after her arrest at Sproul Plaza during Berkeley’s Free Speech Movement; Ron Bridgeforth, a project director at age 19 for the Student Non-Violent Coordinating Committee in Mississippi; and Saturu Ned, an early Black Panther leader in Sacramento, then Oakland.

The students prepared for their oral histories as historians would, studying the politics and events, writing questions asking their guests about the details of their lives, seeking to understand activism in the context of the times.

What struck many of them was the moment of transformation, the don’t-look-back change when people from a different era, not too much older than they are now, made the decision to dissent and immerse themselves in a cause.

For Marion Kwan, who grew up in Chinatown, it was Freedom Summer, when she was one of 700 volunteers who traveled to Mississippi to register black voters and integrate segregated public places. “I knew what racism was like in Chinatown; and I wanted to know what racism was in the Deep South,” she said. She quickly discovered: “Your six senses are always on alert, even when you were asleep; that was new for me.” Today she is a community college counselor for low-income, struggling students in San Francisco.

For Gary Hart, a retired Democratic state senator and former state secretary of education, and Gil Villagran, a retired social worker from San Jose — two men from opposite backgrounds ­— the Vietnam War was the catalyst. Hart, who grew up in a Republican family in San Diego and got a football scholarship to Stanford University, became active in the draft resistance movement. Along with other young people, he joined the “Clean for Gene” presidential campaign of Sen. Eugene McCarthy in 1968. Villagran, a low-income son of a bracero, a farm worker from Mexico, was expelled from San Jose State with other Vietnam protesters. But he started again in community college, switched from math to philosophy, earned a master’s degree and became a senior lecturer in social work at the college that had kicked him out.

For Adrianne Aron, an insecure girl from St. Louis who broke off from her parents when they wouldn’t pay for her to go to college — “they said girls could get a husband as easily by staying home” — her activism began when she heard Mario Savio, a charismatic leader of the Free Speech Movement, at UC Berkeley. “I was terrified,” she told a trio of students, recalling her early days at Berkeley. “I was afraid to open my mouth. I sat and admired students with the ability to ask intelligent questions. They had something I didn’t have: self-confidence, for they came from families with love and support.”

But she said Savio “was really speaking to the marginalized. He was a leader with the ability and desire to speak meaningfully, to connect us to a movement.” She participated in the student strike in 1962 and the anti-Vietnam war movement, and went to Cuba with other young Americans to cut sugar cane for Fidel Castro in defiance of the U.S. boycott. She became a psychologist who worked with survivors of torture in Central America.

Her words resonated with Alina Aceves, who’ll be a senior at James Logan High this year. “She was sheltered; she was a follower. Her eyes opened up; I connected with that.”

Jose Mascorro did, too. “She was not experienced in anything; everyone else was outgoing. I’m quiet, too, and choose to be alone. But I understand that you have to get out of your comfort zone and fight for change. No one will do that for you,” he said.

The advice of Gary Hart — “there will be disagreements and different approaches, but keep in touch with people you disagree with” — and others stuck with Gemma Fa-Kaji, a junior at Berkeley High. “You can’t work with just those with the same views. You need to work toward a larger goal, which is missing from many movements. In young adults, there is more apathy now. We heard people doing so much, it shows me what is possible.”

As a pilot, Making History captured the complex dynamics that have shaped the Bay Area since the Depression. But, like micro-climates, each area and region in California will have different legacies to discover, museums and monuments to explore and elders to interview. Training for Making History will equip teachers with historical techniques and tools to mine their own communities.

But the success of the pilot also reinforced for Reinhard the value of immersion in historical exploration for students who otherwise couldn’t afford a month-long enrichment program. “They networked across the Bay Area, grew comfortable on a college campus,” she said. “That’s not often done for the humanities.”