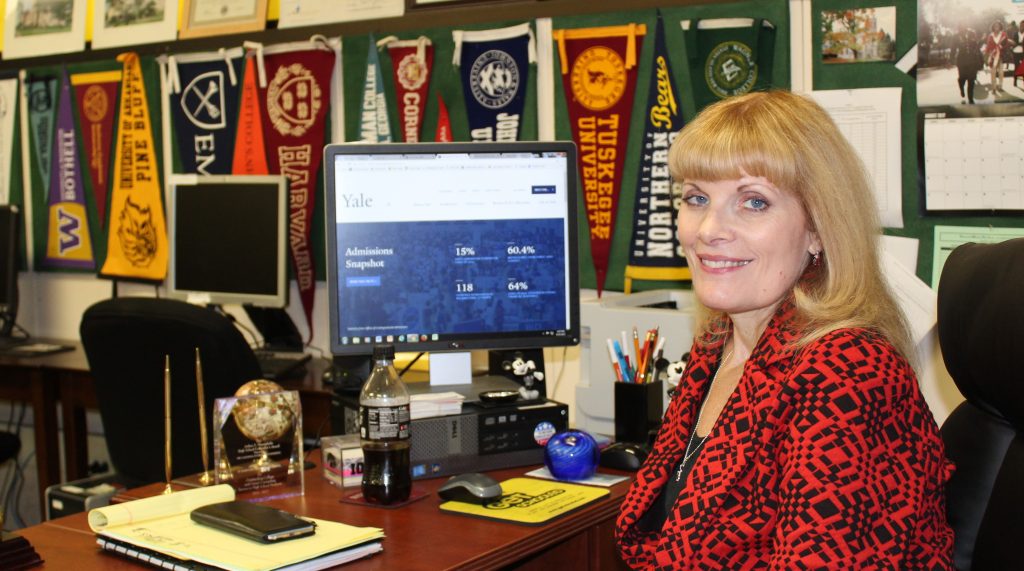 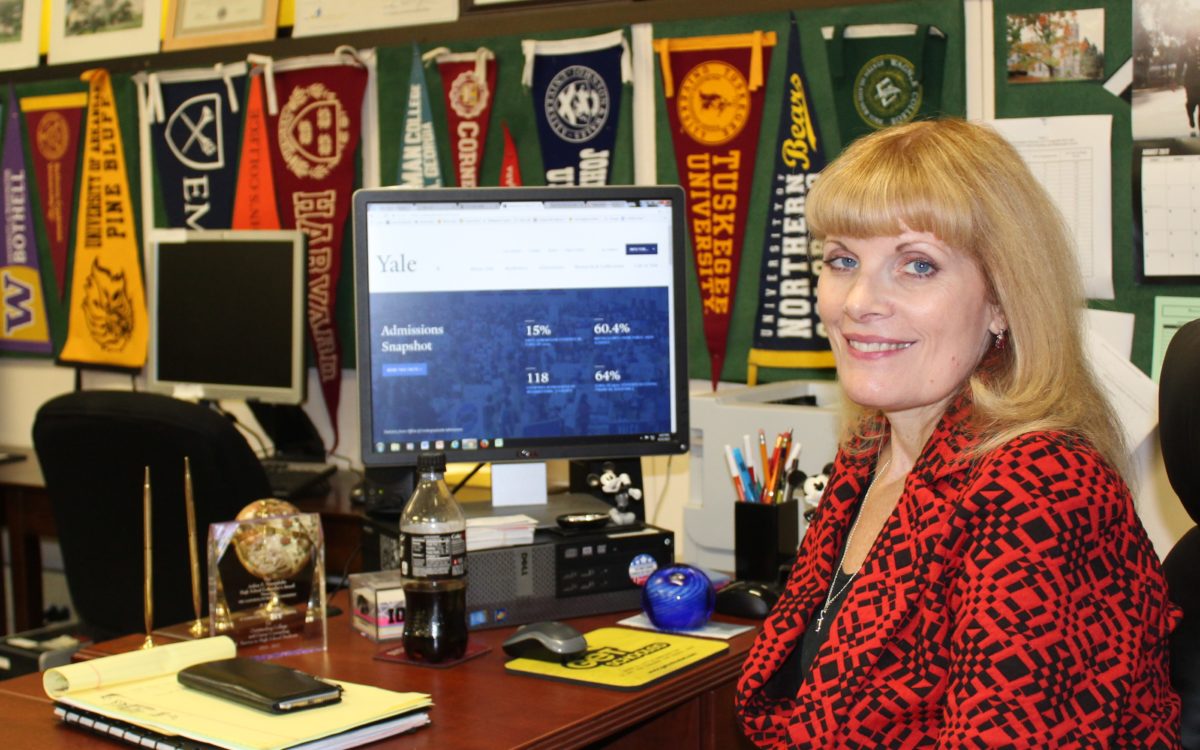 Larry Gordon/EdSource Today
Lynda McGee won a statewide honor for her work as the college counselor at the Downtown Magnets High School in Los Angeles.

Larry Gordon/EdSource Today
Lynda McGee won a statewide honor for her work as the college counselor at the Downtown Magnets High School in Los Angeles.

At many urban schools in California, counselors would be delighted if 67 percent of recent graduates were headed to four-year colleges and 31 percent to community colleges. But for Lynda McGee, college counselor at the Downtown Magnets High School in Los Angeles, that rate was a bit of a drop from the year before, partly because of increased selectivity at UC and CSU. She pledges to boost the numbers next year, working to help enroll the 250 seniors — most from low-income and immigrant families — at colleges that match their skills and provide enough financial aid.

That drive helped McGee recently win the prestigious Arthur S. Marmaduke Award honoring outstanding achievement in California high school counseling. That annual prize is sponsored by the California Student Aid Commission, the state agency that administers Cal Grants, and the honor is named after its former longtime executive director. It comes with a privately funded $1,500 gift, which McGee used to purchase a new office chair and to stretch her budget on a recent trip to Italy where she helped to chaperone 14 students.

A former English teacher, McGee has been a counselor for 17 years at the Downtown Magnets. The school offers business, fashion, computer science and engineering programs and scores much higher on state tests compared to the rest of the Los Angeles Unified School District. EdSource senior correspondent Larry Gordon recently interviewed McGee at the warehouse-looking campus just west of downtown. Her comments have been edited for space and clarity.

EdSource: If you were talking to a young person interested in a counseling career, what would you tell them about the personality type and skills they needed?

McGee: You have to be willing to work for free sometimes because they couldn’t possibly pay you for what you have to put in. This job is on my mind too many hours a day. I think: What could be better, what could I fix over the next year? You have to be passionate about it and you have to have the ability to be pathologically optimistic…You have to be the one who is going to find a student something to do after high school, whether they’ve got a 3.8 GPA or 1.8. And I believe college is for everybody. That could mean vocational classes at Trade-Tech or certificates programs. To stay viable and employed, you need advanced training. I don’t believe you can leave high school and just immediately find a job and have everything work out for you anymore. I think that may have been possible in my mother’s time and maybe even my time. But not now.

So many of your students are in the First Generation of their families to attend college. Does that mean you do things differently?

Working class parents who didn’t go to college tend to think of college like it’s a gift, not an entitlement. They are so appreciative of what college can do. But many need help with the applications, with understanding financial aid. They might look at the price tag of college and say it’s more than they make in a year. If they don’t understand how financial aid works, they may think it’s not an option for their children…. And sometimes the bigger issue is letting their kids go away to college. Some parents worry that will hurt their family and their kids won’t come back.

But you still push for students to attend college away from home, even out-of-state. Why?

Many of the kids who are successful here are the ones who fix everything in their families. Sometimes they are the only English speakers in the family. They repair, they fix, they maintain. And if they are in college and they constantly have to go home to fix things, I’m afraid it’s going to slow them down or perhaps, if it’s a bad year at home, they will be convinced they have to drop out for a year. If they are far away, then it’s less likely that they will come home unless things are really, really bad.

Won’t your attitude make some parents angry by taking away the child who is their rock?

What I’m doing is giving that kid four years so they will finish on time to create a new pathway for their family. When they come back, they will be able to write the parents a check that will make their world a lot better. But the student can still be independent. That changes the trajectory of the family. But if it takes them eight years to graduate college, then those changes are delayed.

What are you telling undocumented students about going out-of-state?

It really goes against my nature but I am starting to tell most of them not to go out-of-state. I don’t want anything to happen to them. I didn’t say it last year but this year I feel the danger of deportation is greater. College is a time to explore. Some kids will be getting involved with protests. But they are in danger because sometimes there are mass arrests and they are not going to be able to walk away from it like everyone else.

And will undocumented students get enough financial aid if they stay in state?

The state Dream Act money covers tuition and a lot of state schools and many private schools will protect these kids and get them the extra funding for room and board… There are avenues for additional aid and I will help them as much as I can. The only sad thing is if they don’t qualify for the (Dreamer) Cal Grants because they haven’t been good enough students. They may be able to get a fee waiver at community colleges but it’s not going to pay for books. They are going to be very limited. So I tell my undocumented kids that it’s like the pre-Civil Rights era. You have to be better than everyone else to be equal. You have to have a better GPA and be a little more assertive and just have to work harder.

What are the most common mistakes students make in the college application process?

Magical thinking can be a problem. Let’s say a student falls in love with a college that accepts them but gives them a terrible financial aid package. There is a gap of several thousand dollars. What often happens is that they end up not going at the very last minute and then it’s too late even for community college. The lesson is you have to follow your dreams but also be practical when you choose your college. You should not pick a college based on financial aid only but it’s absolutely a huge consideration. And you have to do everything you can to get maximum aid. I intercede when I can because I don’t want to see a student who had several options end up with none.

What about deciding what to study in college and getting ready?

Everyone has talents.  But they have to be realistic about where their talents are.  If you are struggling in certain high school course work and that is required for your college major, you have to ask yourself: are you sure you are ready to take it on…I had to come to the realization that I couldn’t be a veterinarian because I’m not a math person. I started college as a biological science major and that lasted one quarter until I realized I was not prepared for that at all. I’d like students to have those conversations with themselves much earlier.

You were cited for staying in touch with students after graduation. Are you ever surprised at how former students turn out?

You don’t always know what you are looking at when students are in high school. I’ve seen some who did terribly in high school and barely got out. And things turned out really great for them later. And conversely there are kids who seem to have it all together in high school and then they never reach their potential… You have to understand you are seeing someone who is partially formed, like a fetus at the fifth month. They are not ready but we expect them to make these adult decisions that could affect the rest of their lives.

Many (graduates) are Facebook friends. I learned this summer that one of my students just graduated from Howard University medical school and another graduated from Harvard Law. And I was happy for them but I also thought: ooh, potential donors in a few years for our scholarship fund.