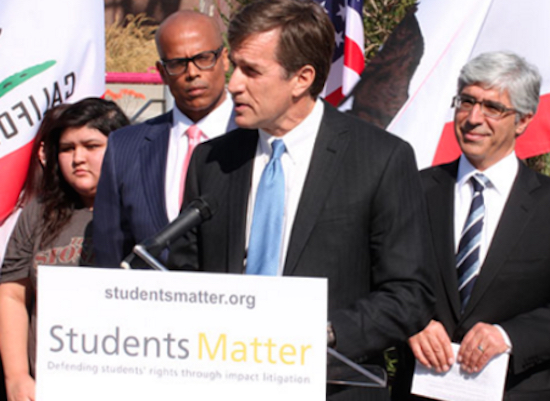 In a pair of split decisions with lengthy dissents, the California Supreme Court Monday voted 4-3 to decline hearing appeals of lawsuits that challenged teacher protection laws and the state’s level of funding for K-12 education.

The decision in Vergara v. California gives a big victory to the state’s teachers unions — the California Teachers Association and the California Federation of Teachers — which sought to preserve the existing tenure, layoff and dismissal laws. It spelled defeat for Students Matter, a small nonprofit organization that sponsored the lawsuit and argued that the laws harmed poor and minority students who were disproportionately saddled with 1 to 3 percent of the state’s worst-performing teachers.

The decision in the other case, Campaign for Quality Education v. California and Robles-Wong v. California, two lawsuits that were combined, upholds lower court rulings that found no constitutional basis for challenging the Legislature’s authority to determine what it considers sufficient school funding.

That decision was a major defeat for a coalition of state education groups, including the CTA, the state PTA and the California School Boards Association, along with advocates for minority students, led by the nonprofit law firm Public Advocates, which brought the related lawsuits six years ago. They had argued that governors and the Legislature set rigorous academic mandates but then didn’t provide enough funding. Low-income kids and English learners especially were harmed by insufficient resources, they argued.

A majority of the seven Supreme Court justices must agree to review an appeals court decision. Two of the three dissenting justices in both decisions, Goodwin Liu and Mariano-Florentino Cuéllar, were ardent advocates for the rights of minority children as law professors before Gov. Jerry Brown nominated them to the court. Liu co-authored what later became the state’s current funding system, the Local Control Funding Formula. The third dissenter, Ming Chin, was appointed by Gov. Pete Wilson. Ruling with Chief Justice Tani Cantil-Sakauye in the majority were Justices Carol Corrigan, Kathryn Werdegar and the newest Brown appointee, Leondra Kruger.

The majority of justices didn’t say why they chose not to review rulings by the courts of appeal. Lawsuits involving state education issues generally cannot be appealed to federal courts. However, Theodore Boutrous, lead attorney for Students Matter, said that attorneys were exploring that option or pursuing another lawsuit in state courts.

The nine student plaintiffs in Vergara, represented by Students Matter, won a momentous, though fleeting, decision two years ago when Los Angeles County Superior Court Judge Rolf Treu ruled that evidence of “the effect of grossly ineffective teachers on students is compelling. Indeed, it shocks the conscience.”

He concluded that the law providing teachers due-process rights after less than two years, known as tenure, laying off teachers based on seniority and making it difficult and expensive to fire teachers combined to create a small set of terrible teachers who were disproportionately assigned to schools with the state’s highest-needs students.

The process, he wrote, “affects the stability of the learning process to the detriment of high-poverty and minority students.”

In overturning the ruling last year, a three-judge panel of the Second District Court of Appeal, based in Los Angeles, didn’t dispute the worrisome impact on students of lowest-performing teachers but disagreed with Treu that the statutes were to blame.

“The evidence also revealed deplorable staffing decisions being made by some local administrators that have a deleterious impact on poor and minority students in California’s public schools,” they wrote. “The evidence did not show that the challenged statutes inevitably cause this impact.”

Local administrators make decisions on tenure, dismissal and exceptions to seniority-based layoffs, and the plaintiffs could have sued over how districts administered the laws but chose not to, they wrote.

In their dissents, Liu and Cuéllar wrote that the appeals court set too high a threshold  in concluding that an identifiable group of student, with common characteristics, had to be harmed – the basis for bringing a challenge involving a fundamental right to an education under the state Constitution.

“Difficult as it is to embrace the logic of the appellate court on this issue, it is even more difficult to allow that court’s decision to stay on the books without review in a case of enormous statewide importance,”Cuéllar wrote.

Liu found the same faulty reasoning in his colleagues’ decisions not to hear both Vergara and the funding adequacy cases. Both, he wrote, “ultimately present the same basic issue: whether the education clauses of our state Constitution guarantee a minimum level of quality below which our public schools cannot be permitted to fall. This issue is surely one of the most consequential to the future of California.” And they deserved a decision by the Supreme Court, he wrote.

In a joint statement from the state teacher unions, CTA President Eric Heins called the decision “a good day for students and educators,” adding, “it’s time to get back to the real issues facing our public schools and work together to improve student learning and support the art of teaching.”

“Eliminating teachers’ ability to stand up for their students and robbing school districts of the tools they need to make sound employment decisions was a well-funded but wrong-headed scheme developed by people with no education expertise,” he said.

David Welch, founder and funder of Students Matter, said that while disappointed in the decision, the three dissents “speak volumes” about the need to change the disputed laws. He vowed to take the fight to the Legislature so that all students, “regardless of income and zip code,” are taught by effective teachers.

Since Vergara was filed, the Legislature defeated several bills, most of them introduced by Republicans, to lengthen tenure and write dismissal and layoff statutes. In June, the Senate Education Committee defeated a bill by Assemblywoman Susan Bonilla, D-Concord, to raise a teacher’s probationary period to three years  before granting tenure. It was a diluted version of a sweeping bill that she had earlier proposed.

The plaintiffs in the K-12 funding litigation lost in both Superior Court and the San Francisco-based 1st District Court of Appeal. But there was a split decision by the three-judge court of appeal, and Liu refers to the dissent by Associate Justice Stuart Pollak in his own lengthy dissent.

After citing the evidence of large gaps in achievement by low-income students and English learners, Liu wrote, “The schoolchildren who brought these actions (Robles-Wong and Campaign for Quality Education) do not claim they are entitled to a world-class education. They ask only whether the California Constitution protects them from being deprived of a minimally adequate education. They are asking the judiciary, as the ultimate guarantor of constitutional rights, to define and safeguard their fundamental right to education.”

As with the Vergara ruling, the four-justice majority didn’t say why they decided to let the appeals court ruling stand. In that ruling, Associate Justice Martin Jenkins acknowledged children’s fundamental right to an education, but, he wrote, the Constitution doesn’t include a requirement for a minimum level of education for schoolchildren or a minimum level of school expenditures. And he indicated that judges shouldn’t presume to have the expertise to set appropriate funding levels.

In a concurring opinion, Associate Justice Peter Siggins wrote, “As much as I can appreciate the plaintiffs’ frustration and dissatisfaction with the overall adequacy of California’s public schools, and recognize our Legislature’s challenges in adequately funding schools to meet the standards it sets, I cannot agree” that the Constitution provides a right to “command the state to fund schools at some qualitative level.”

Much has happened since the plaintiffs filed their lawsuits six years ago during an economic recession that led to substantial cuts in school funding. For most districts, funding has been restored to pre-recession levels, and the Legislature adopted the Local Control Funding Formula, based on a paper that Liu co-wrote as a law professor at the University of California, Berkeley School of Law, which provides extra money for low-income students and English learners.

But, Liu wrote, student achievement remains low. In the 2015 National Assessment of Educational Progress, California students ranked between 41st and 48th among states in 4th and 8th grade math and reading tests. And, he wrote, the state’s new funding formula redistributes, not increases overall funding. None of the finance and governance reforms “directly addresses the fundamental question of adequacy at the heart of plaintiffs’ complaints,” he noted.

“Whether education funding will continue its current upward trajectory remains to be seen,” he wrote.

Saying he was “somewhat heartened” by Liu’s admonitions that the court’s inaction only forestalls the likelihood of another lawsuit in the future, John Affeldt, managing attorney for Public Advocates, said in a statement, “Should the state’s education system continue to stagnate or worsen — as is likely the case given the state’s paltry investment in its education system, we will continue to press this issue.”