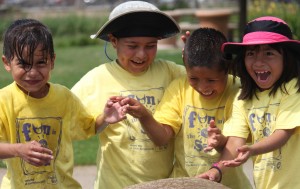 United Way
Summer programs often focus on experiential learning. These students in Santa Barbara play at a water fountain during a field trip.

United Way
Summer programs often focus on experiential learning. These students in Santa Barbara play at a water fountain during a field trip.

Despite well-established research that shows the importance of keeping students active and learning during the summer, small and mid-sized districts often find it difficult to provide quality summer programs because of the cost and logistical challenges they pose.

But some California districts have met those challenges by partnering with county offices of education, after-school programs, local organizations and each other, according to a recent report from the Partnership for Children & Youth, an advocacy group based in Oakland.

Successful summer programs “look and feel like summer camp but incorporate intentional learning goals” and provide learning opportunities for low-income students that are often scarce during the summer, according to the report, “Investing in Summer Learning: Stories from the Field.”

Without such opportunities, “students who keep pace and succeed during the school year often end up losing ground in the summer,” according to the report.

The report highlights how three communities in 2015 pieced together summer programs for low-income youth.

Kerman Unified and Fowler Unified, both mid-sized districts in Fresno County, wanted to attract middle-school students to a summer program that provided academic support, but with a more interactive, experiential approach to learning.

They looked to neighboring Central Unified, which has worked with a local nonprofit, the California Teaching Fellows Foundation, to provide a summer program since 2009. Called Central Enrichment Summer Adventures, the program is aligned with state English, math and science standards and actively engages students, who learn to program robots, trouble shoot code and build circuits. Students also participate in projects connected to the dystopian novels that they are reading, such as building mazes when they read Maze Runner by James Dashner or designing the clothes worn by tributes, who fight in the Hunger Games, the novel by Suzanne Collins. The students also do community service projects such as pulling weeds at Storyland Playland, Fresno’s premier amusement park, said Rico Peralta, director of program development for the foundation.

In 2015, the foundation agreed to provide summer programs for the Kerman and Fowler districts at a cost of $17.50 per student per day for instructional materials and staffing. The Fresno County Office of Education provided staff development, training and some materials. The programs lasted six hours a day for five weeks, and each district enrolled 100 students.

“I think traditional summer school is not working, particularly for middle school,” said Robert Frausto, superintendent of Kerman Unified. “You get kids in a summer program if they want to be there. They’re learning, but they’re also having fun.”

Robert Frausto, superintendent of Kerman Unified, said in the past he had used summer for academic interventions for students who had fallen behind. Now, he said, the interventions happen during the school year when the help is more timely. That approach allows summer to be used to prevent learning loss.

“I think traditional summer school is not working, particularly for middle school,” Frausto said. “You get kids in a summer program if they want to be there. They’re learning, but they’re also having fun.”

In rural counties, students often are isolated during the summer, many living far from towns and neighbors. In summer 2015, the county offices of education for Tehama and Glenn counties in north-central California provided summer programs for almost 15,000 students from 23 school districts spread over about 4,000 square miles.

Districts provided facilities and some transportation. Outside organizations, including parks and recreation departments, other city agencies, community-based organizations and local businesses, also contributed.

The emphasis was on hands-on learning. For example, students were able to take advantage of the Tehama County Office of Education’s “Makerspace” facility, where they could build circuits, wind tunnels and other construction projects.

“Community organizations and businesses are all coming together and expecting more for our kids,” said Karla Stroman, the administrator in charge of the after-school and summer programs for the county office. “A lot of that energy has been devoted to making summer programs available.”

Relying on its after-school partner, THINK Together, the mid-sized Mountain View School District put together a camp-style summer program for 2,300 elementary and middle school students at 12 sites in 2015. The K-8 district also used the five-week program to train its teachers, who practiced their new skills with the students in the program.

Mountain View, where almost all students are eligible for free and reduced-price meals, paid for the combination program by using $475,000 in supplemental and concentration grant funding it received for low-income students and English learners through the state’s Local Control Funding Formula. The cost was about $220 per student.

The teachers attended an afternoon professional development session on teaching reading and how to use a computer program called DORA to assess where students needed help. The teachers then practiced those skills with the students the next morning. Assessments at the end of the program saw gains for the students, particularly in vocabulary, said Margarita Amador, director of curriculum and instruction.

Besides a focus on reading, the students participated in sports and dance and created their own rap music. The program also provided opportunities for the students who were in middle school, generally an awkward period in life, to build social skills, said teacher Chris Jimenez. They formed teams and created team chants. They put on a talent show at the end.