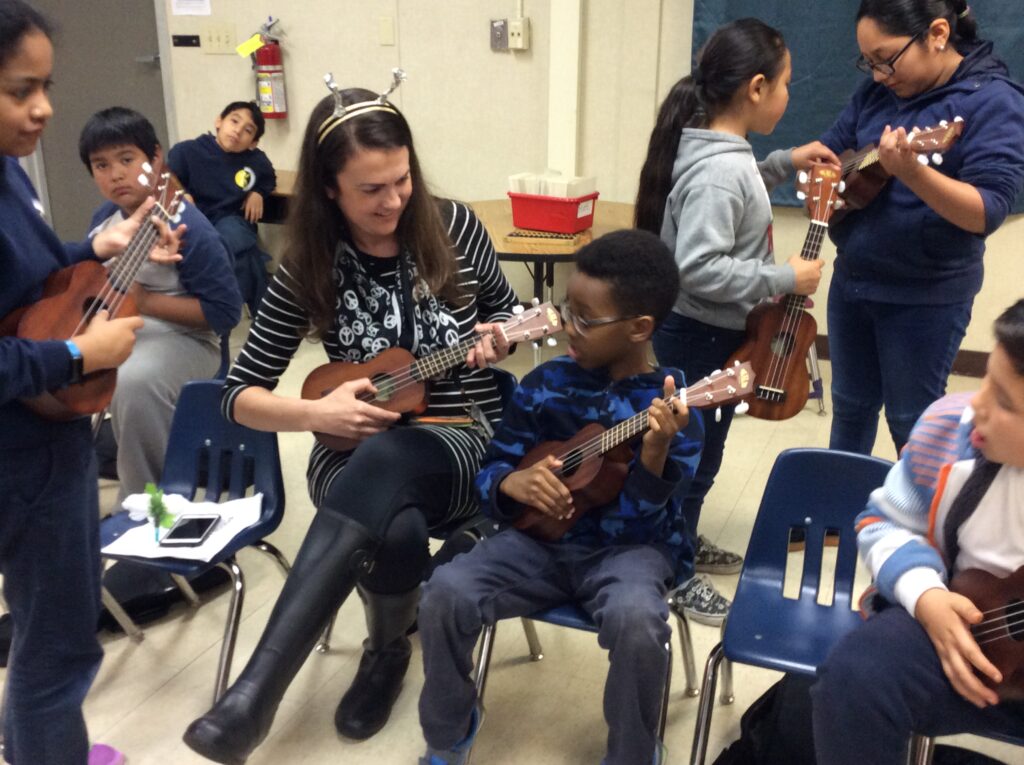 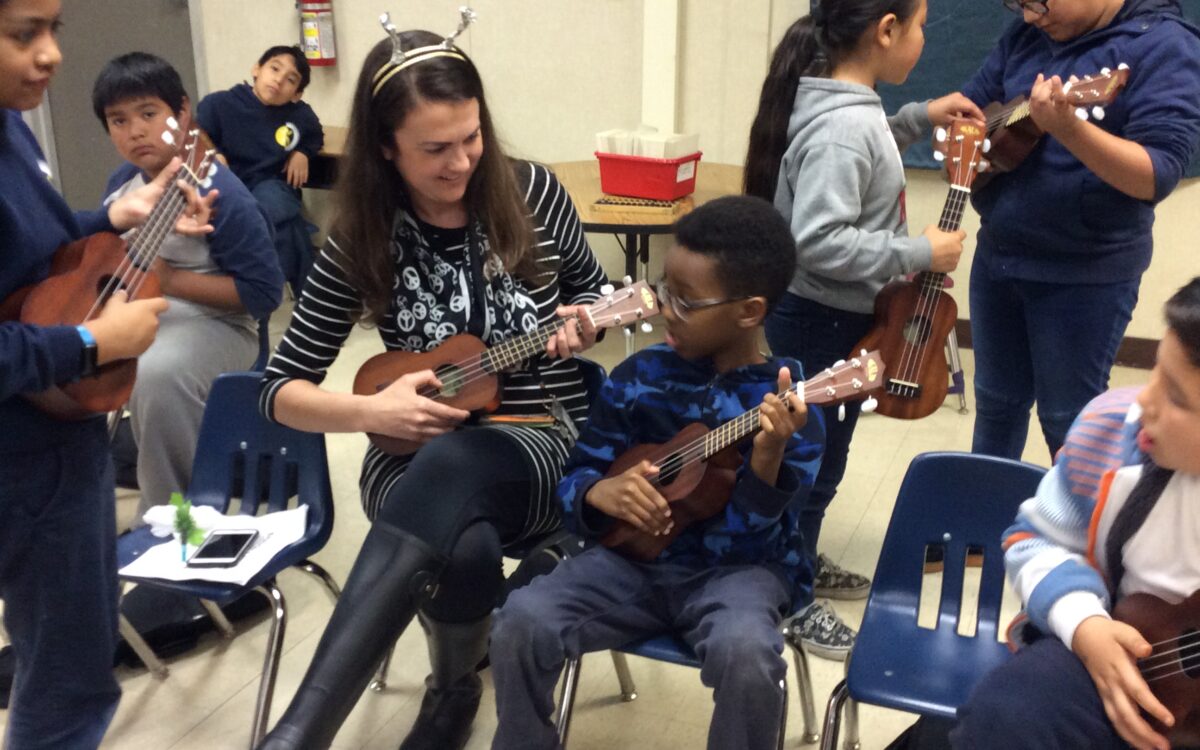 Achieve Academy charter school Co-Principal Lucy Schmidt was one of more than 1,000 administrators who recently spent a day seeing her campus through the eyes of a student as part of a national “Shadow a Student Challenge.”

The goal was to help school leaders empathize with students and teachers – and to identify strengths and weaknesses, then take actions to improve their learning environments and campus cultures.

The national, weeklong challenge was created through a partnership between the “School Retool” professional development program, Stanford University’s d.school, IDEO design and innovation consultants and the William and Flora Hewlett Foundation. According to the Shadow a Student website, 1,440 educators in 26 countries pledged to shadow students, jot down their observations and then debrief with their staffs to discuss “hacktivities” – or short-term solutions – to challenges faced by their students. In California, 277 educators signed up to participate.

Organizers have created “tool kits” with resources for sharing their experiences with others. Although they encourage administrators to shadow students anytime throughout the year, they created the challenge week for the first time this year as a way to bring attention to the practice and build momentum for it, said Susie Wise, director of the K-12 lab network at the Stanford d.school, who helped organize the challenge.

“One of the things we think is really important is to be student-centered,” Wise said. “We started ‘Shadow a Student’ to get principals to understand their school’s users and introduce a sense of empathy. It gives you so many clues to how you can start to make changes to turn schools into places where deeper learning is happening more of the time.”

Several California principals who participated in the challenge agreed.

Damon Grant, principal of Unity Middle School in Oakland, shadowed a student who had been bullied in the past.

“I wanted to send him the message that we care about him,” she said. “I wanted to understand what he’s experiencing.”

No one bullied the student that day. Instead, Grant said the student was proud to have the principal shadowing him because it made him feel special.

“I saw him wanting to fit in,” she said. “I saw him kind of reaching out and wanting to connect to some of the kids who have been bullying him.”

“We were trying to make note – in addition to what their daily experience was like – of how many times they spoke and what kind of language they used,” said Kara Duros, director of instruction. “We definitely noticed a huge trend that they are just silent – and that when they do speak, they are using social language and not necessarily using ‘academic’ language,” or using the terminology they have been taught in class.

Teams of teachers organized by grade level at the school are brainstorming about how they can increase classroom conversations about the academic content between English learners and their classmates, she said.

“It has definitely caused us to sit down and rethink what we’re doing and how we’re serving that population,” Duros said. “We didn’t see many instances of students sharing ideas about the content, or challenging one another’s ideas or building on one another’s ideas.”

One team wants to focus on helping students reflect on their learning, so they can advocate for themselves as they strive to reach goals, Duros said. Another wants to emphasize writing, since that goes hand in hand with speaking, she said.

David Castillo, head of the Urban Montessori Charter School in Oakland, said he observed students to see how they handle choosing what to work on. Unlike students in traditional public schools, Montessori students are free to work at their own pace on projects that interest them for up to three hours at a time, he said. They are motivated based on their own interests, he said, rather than working on assignments because the teacher tells them to or because that’s what everyone else is doing.

“Students make those decisions on a daily basis and start to build that skill and muscle around self-agency and efficacy,” he said. “It’s powerful if you can get that when you’re young in those formative years.”

In the afternoons, however, students rotate between art and music and other classes that require them to move from one location to another. Castillo said he found the schedule exhausting. Based on his shadowing experience, he said he plans to get feedback from students about their schedules next year.

“It’s a lot of movement – a lot of transition,” he said. “When we go into creating next year’s schedule, I want to make it more open and really try to reduce the number of transitions because it takes away time from instruction and it’s a lot of work.” Castillo and the other school leaders said they would like to continue shadowing students next year. In fact, Castillo said he plans to offer the opportunity to shadow a student to every teacher at his school.

“I do think that’s powerful,” he said. “From the seat of an administrator or teacher, it’s really easy to lose that perspective of what students’ daily experience is like.”

In Southern California, Advanced Learning Academy Principal Kim Garcia shadowed several different students in one day – one at a time for 30 to 45 minutes each. She said she appreciated the chance to use the school’s Google Chromebooks and other technology as a student.

After shadowing one student who came to the school a couple of weeks ago, Garcia said she plans to work on developing a mini-orientation or “entry plan” for new students who arrive mid-year.

Back at the Achieve Academy in Oakland, 10-year-old Sekai Mitchell said he enjoyed being shadowed by his principal as he learned to strum a ukulele in music class and played tag at recess.

“It makes me feel comfortable,” said Sekai, who came to the school mid-year.

Schmidt said she and another staff member who shadowed a student were surprised by “the amount that as adults we think we notice – and what goes unnoticed during the day in our students’ lives.”

Shadow a Student organizers will host a Google Hangout at 5 p.m. Tuesday to give participants an opportunity to share their experiences and insights.

“The next step,” Wise said, “is to work with school leaders to reflect and take action.”