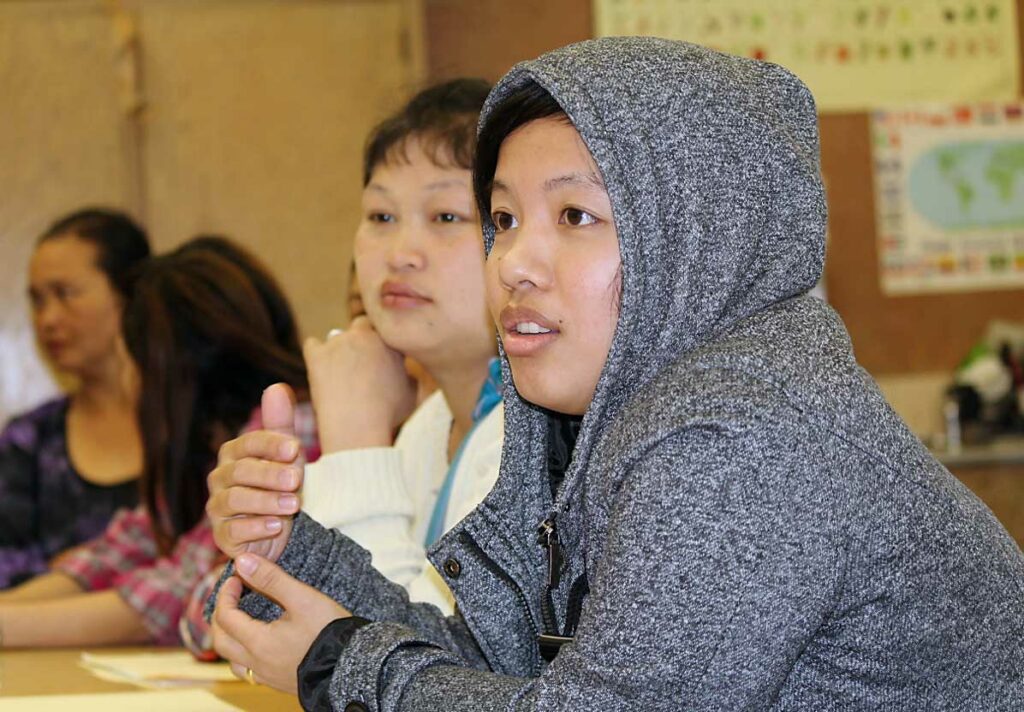 Voters will decide Tuesday whether to expand bilingual education programs in California schools, bringing an end to an almost 20-year restriction on their growth. But passage could create a new challenge: how to find enough bilingual teachers amid an ongoing shortage of teachers, especially those who can teach in multiple languages.

“Right now there are people who want to mount programs and they are not able to do it,” UCLA research professor Patricia Gandara said of Proposition 58. “There is already a demand that cannot be met, and this will increase that demand.”

Proposition 58 would remove the requirement that English learners be taught in English-only classes and would allow public schools to choose their own language instruction programs. It would also remove the requirement that parents who want to enroll their children in bilingual education programs apply for annual waivers. It might also lead to an expansion of dual immersion classes, in which students who are native English speakers and those who are native speakers of another language are taught together in both languages to achieve proficiency in both.

Currently under Proposition 227, approved by voters in 1998, English-only instruction is mandated for English learners. Students who do not speak English are required to spend a year in English immersion classes before they can join other students in mainstream classes. These classes are structured where “nearly all” instruction is in English, according to the California Department of Education. “Transitional classes” where students begin instruction in their home language before gradually becoming proficient in English are classified as alternative programs and require a parent waiver.

Prop. 58 has garnered the support of many leading lawmakers, including Gov. Jerry Brown, and organizations such as the California Federation of Teachers and the California Teachers Association. Supporters say it will give schools flexibility and create opportunities for both English learners and English speakers to learn multiple languages. Opponents argue it will funnel English learners primarily into classes where instruction is in their native language, making it more difficult for them to learn English. Ron Unz, chairman of “English for the Children,” which sponsored Prop. 227, is Prop. 58’s most vocal opponent.

The state’s 1.4 million English learners make up 22 percent of the state’s public school population. But while California has the highest percentage of English learners in the nation, the number of teachers qualified to lead bilingual education classes is in short supply, said Santiago Wood, executive director of the National Association for Bilingual Education.

Gandara said teachers need financial incentives to invest the time, attention and work to be able to teach in a bilingual program.

Mary Claire Delgado, the interim lead “talent recruiter” for the Oakland Unified School District, said when she first heard about Prop. 58, she was excited about the opportunity to expand bilingual education for the district’s 49,000 students. But then she immediately thought, “Oh no, where are we going to find people?”

The push for Prop. 58 comes at a time of shortages of teachers in California. Bilingual teachers are among those most in demand, along with special education, science and math teachers.

But the emergency authorizations can only be renewed twice and cannot exceed three years, leaving the staffing of bilingual classes an ongoing concern.

“It is absolutely a challenge, and currently we are struggling to meet that need,” said Nicole Knight, Oakland Unified’s director of English Language Learner and Multilingual Achievement.  Knight said if Prop. 58 passes, the district’s program will expand gradually which will give the district time to incorporate various strategies.

In a recent recruitment effort, Oakland Unified hired more than 400 teachers, but only six of them were qualified in bilingual education, Delgado said. Of the almost 2,500 teachers in Oakland Unified, about 120 are bilingual teachers, Knight said. This number is expected to double by 2020 under a district plan to increase the number of dual immersion classes, she added. Oakland Unified currently has 21 schools with a range of bilingual programs.

“We’ve set forth a vision that is already expanding the goal of biliteracy and have worked within the law and mostly leaning on parent waivers as a way to provide that service,” Knight said. That vision includes the goal that anyone who enrolls in an Oakland school will have the opportunity to learn multiple languages from pre-K through 12th grade, she said.

Delgado said Oakland Unified will employ a “multi-pronged approach” to find more teachers. First it will conduct an intense local search, then branch out nationally and internationally.

“We have 50 native languages in our district, 148 in the city of Oakland,” Delgado said. “When you think about that, you think, wait, we’ve got the talent here and how can we move the talent into these roles and support them.”

Some teacher assistants, for instance, speak languages in addition to English and have classroom teaching experience but need support to help them get a bilingual credential, Delgado said. For those teacher assistants, the district can help “formalize a pathway and demystify the murky process” of training and credentialing, she said.

Oakland Unified will also continue to recruit overseas by partnering with the California Department of Education, Delgado said. Through the exchange visitor program for teachers, Oakland Unified has recruited teachers on temporary assignments, for up to three years, from Mexico and Spain. There are 36 teachers from the visitors program in Oakland Unified, and 26 of them were recruited in 2013, according to Matthew McCue, a talent recruiter for Oakland Unified.

The need for more bilingual teachers in Oakland Unified has grown over time, as the number of immigrants from Central America has increased in the district, Knight said. The immigrant student population has more than doubled in 2015-2016 to 1,173 from 549 in 2012-13.

The Los Angeles Unified School District is also expanding its dual language immersion program and has already started charting a plan to fill the need for bilingual teachers. The district has 81 dual immersion and bilingual classes, including 10 transitional classes.

Changing demographics is one reason for the growth, said Hilda Maldonado, the executive director of multilingual and multicultural education for L.A. Unified. Recently, the district introduced Armenian bilingual programs, when administrators noticed many of the Armenian families moving into communities were bypassing public schools to enroll their children in private schools where their language was taught.

“We have communities where we wanted to be able to respond to those communities’ needs so their children are benefiting from a bilingual and biliterate education,” Maldonado said. Those neighborhood schools already have a pool of qualified bilingual teachers, and there are many who are teaching in English learner classes that can be shifted, if needed, to dual immersion classes, she said.

For a more commonly spoken language like Spanish, Maldonado said she is less concerned about staffing shortages. She is confident the community already has qualified professionals the district can recruit to teach those classes. However, “if we are talking about a less common language, like Mandarin, for that language we may have to look outside of our district and state,” Maldonado said, and that can take time.

“The issue for us now becomes where are those teachers and where are the programs opening up so we can match them,” Maldonado said. “So as principals look at opening a program, it will be a gradual process because the programs take time to develop.” While the district has already expanded its programs under Prop. 227, more are likely to be created if Prop. 58 passes. But Maldonado said she cannot predict how quickly those will be implemented and that the district will be mindful of staff constraints in the process.

In the San Francisco Unified School District, Christina Wong, special assistant to the superintendent, said the district has been adding more bilingual and dual immersion classes in Cantonese, Mandarin, Korean and Spanish for the past several years.  The district currently has four “pathway programs” to teach English learners, bilingual students and English-speaking students from pre-K to 12th grade.  There are about 400 bilingual teachers and 64 dual language programs. As a result of that growth, the district has relied on creative solutions to fill the shortage of bilingual teachers.

For instance, in 4th and 5th grade, Wong said the district uses two teachers for a Chinese and English dual immersion class. Students spend 50 percent of the day in English instruction with one teacher and then swap classes and learn in Chinese from the other teacher. Wong said teachers working in pairs can benefit from that partnership and can focus on individual lesson plans in each language.

From pre-K to 12th grade, the district has 24 Cantonese, 34 Spanish, two Korean and four Mandarin dual-immersion classes. Wong said though the district’s goal is to add more classes, the district will be strategic and focus on “quality over quantity,” especially since recruiting qualified teachers is already a challenge. It’s hard to find teachers who are credentialed to teach, proficient enough to teach subjects in both languages and who are comfortable with the dual instruction, Wong said.