The California School Boards Association has updated spending numbers from studies published a decade ago to support the argument its attorneys will make Wednesday in an appeal of a lawsuit claiming the state is violating students’ rights by inadequately funding public schools.

The school boards association argues in a new report that California would have to spend between $22 billion and $42 billion more annually for K-12 schools to meet the state’s constitutional obligation to ensure every child has a quality opportunity to learn. That figure is an estimate in current dollars based on two 2004-05 studies that provided evidence for the 2010 lawsuit, “Robles-Wong v. California.” Oral arguments in the case are scheduled for Wednesday in the 1st District Court of Appeal in San Francisco.

In the report, “California’s Challenge: Adequately Funding Education in the 21st Century,” the CSBA suggests that districts would need tens of billions of dollars more than the $64 billion that Gov. Jerry Brown proposes to spend on K-12 schools next year to implement the Common Core and other new state academic standards and to fulfill the eight, broad priorities laid out in the Local Control Funding Formula. The Legislature passed the new funding and school accountability law in 2013, a year after plaintiffs in Robles-Wong and plaintiffs in Campaign for Quality Education v. California, a related lawsuit, filed final briefs. Since then, both lawsuits were consolidated into one case. 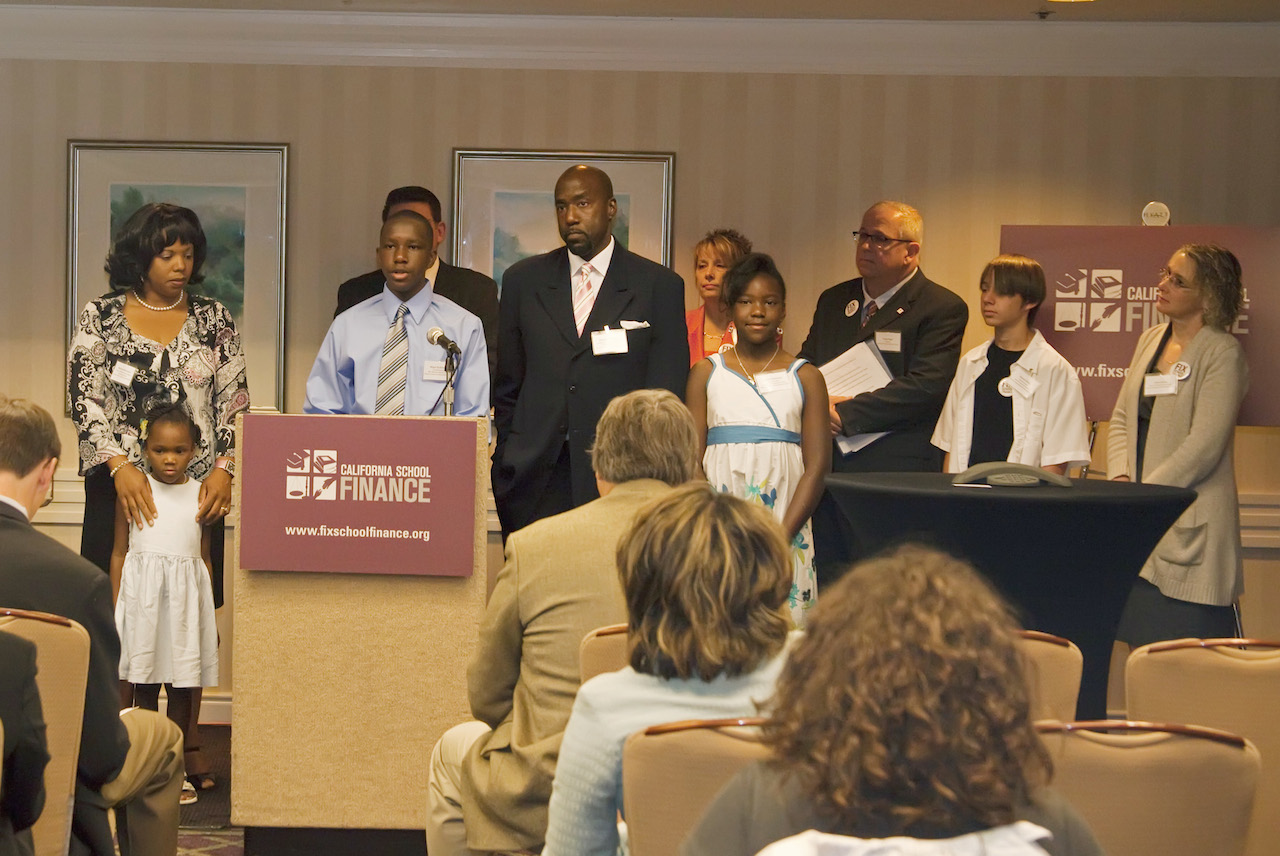 In order to present the latest spending numbers as evidence, an attorney for the plaintiffs in the consolidated lawsuit must convince three justices from the state Court of Appeal to let the case proceed to a full trial. During an hour of oral arguments, the attorney, Steven Mayer, will argue that a lower court judge erred when he dismissed the case in December 2010. A lawyer representing the state will argue that the judge got it right.

The plaintiffs in Robles-Wong and Campaign for Quality Education assert that insufficient funding levels are denying children their constitutional right to an education that prepares them to participate fully in economic and civil life. They argue that the Legislature has failed to provide districts with enough money to carry out state-mandated academic standards and programs, thus failing the state constitutional requirement to “keep up and support” the state’s public schools.

In his ruling, Alameda County Superior Court Judge Steven Brick rejected the plaintiffs’ core claims. While acknowledging that children in California have a fundamental right to an education, Brick ruled that the state Constitution doesn’t require the Legislature to fund it at any particular level, “however devastating the effects of such underfunding have been on the quality of public school education.” The Legislature has the prerogative to set the level of school spending, Brick said.

The plaintiffs in Robles-Wong include the CSBA, the Association of California School Administrators, the state PTA, nine school districts, the Youth and Education Law Project at Stanford Law School, and 60 individuals. Maya Robles-Wong, then a junior at Alameda High School when the lawsuit was filed, is the lead plaintiff.

The 1st District Court of Appeal has had the appeal for more than four years. Court watchers say that scheduling oral arguments probably indicates that justices are ready to issue a decision although they sometimes tweak it based on what they hear in oral arguments. They must issue a ruling within 60 days, by the end of April.

When filing their lawsuit, plaintiffs relied heavily on the spending calculations in two studies in Getting Down to Facts, a collection of 20 school reports that Stanford University published in 2007. In one study, by the Public Policy Institute of California, a panel of educators estimated that it would cost $17 billion more, or a 40 percent increase over 2003-04 funding, for additional resources to move all schools to a target score of 800 on the Academic Performance Index. At today’s dollars, the CSBA said, it would take $22 billion more to reach that goal. The other study, by the American Institute of Research, asked two additional educator panels how much it would cost to meet academic targets required by the federal No Child Left Behind Act by the year 2011-12. One panel recommended spending $24 billion (53 percent) more than the $45 billion spent in 2004-05; the other recommended $32 billion (71 percent) more. In today’s dollars, the two recommendations would rise to $31 billion and $42 billion more annually.

Today, the studies no longer are relevant, assuming their estimates were reliable – something that a trial court would have had to determine. The State Board of Education suspended the API two years ago, and it doesn’t intend to resume compiling the index. Last month, Congress replaced the No Child Left Behind Act, widely criticized for setting unrealistic academic targets, with the Every Student Succeeds Act.

But the CSBA’s latest report contends – and its attorney will argue on Wednesday, if given the chance – that the plaintiffs’ constitutional case is still sound. Funding has increased substantially under the Local Control Funding Formula the past two years, particularly for low-income children and English learners. But even at full implementation, the report says, California’s average funding per student will be substantially below the national average.

Just as it was in 2010, the state’s ratios of counselors, librarians and teachers to students rank at or near the bottom among states. By most indicators – graduation rates, results on standardized tests, percentage of students needing remediation courses in college – there are big gaps in achievement between low-income and wealthier students and between white students and Latinos and African-Americans.

Additionally, new academic standards, such as the Common Core, have raised expectations for teachers and students, and districts face continuing demands to upgrade classroom technology. The report also points out that special education costs have increased faster than state and federal funding. As a result, special education costs have consumed more of a “typical” district’s general fund, rising from 22 to 32 percent within a decade, the report says.