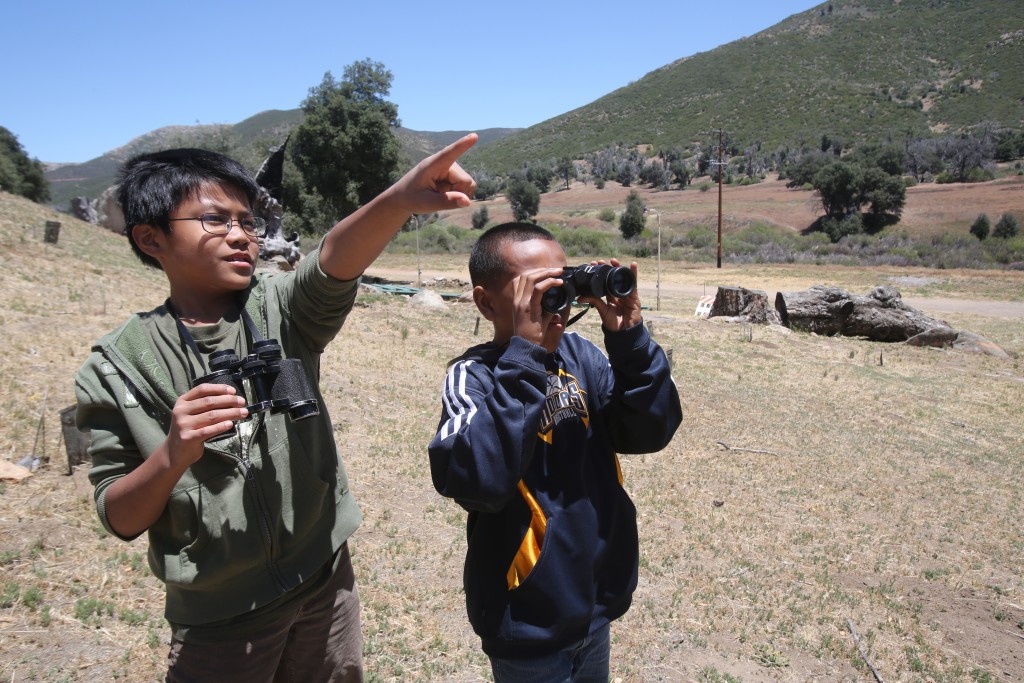 No iPads are allowed in the outdoor education program at Jones Gulch, which sits deep in the woods of San Mateo County, a few miles from the Pacific Ocean and not far from Silicon Valley’s tech giants. Each week of the school year, 200 middle-school students spend four days together at the camp, where they learn to think like scientists in a stunning environment that includes old-growth redwoods and countless slimy banana slugs.

Since California’s first public outdoor program, known as 6th-grade camp, opened in San Diego County 70 years ago, the state’s vast landscape has provided abundant natural settings for 20 programs, from Siskiyou County in the far north to the Sierra foothills and south to San Diego. Now those programs are playing an informal but important support role for school districts, which must implement the Next Generation Science Standards (NGSS) in the next three years.

While many districts are just beginning to make the shift to the new science standards, directors of California’s network of outdoor programs say their week-long outdoor science camps can help districts and their students in the interim because the outdoor science curriculum, with its focus on asking questions based on observation, carrying out investigations and analyzing data, hands-on learning and group interaction, is well-aligned with the new standards, which are being rolled out across the state this year.

It’s more important than ever to get kids enough time in nature,” said Hallie Mrizek, a high school student volunteering at the Jones Gulch program.

The new science standards “are the core of what’s taught out here,” said Mark Nolan, director of San Mateo County’s outdoor education program, as he strolled through Jones Gulch, discussing concepts such as nature’s diversity and its ability to adapt. Before students pose a scientific question, he said, they are encouraged to spend time observing the natural environment – with binoculars and a note pad – and then compare and analyze their observations.

The benefit for kids, Nolan said, is that such direct inquiry allows them to focus less on fact-searching on their electronic devices, which he calls “screen time.” Without tablets, students begin to better see the natural world, he added.

Earlier that day, many of the same students planted seeds and tended to a popular vegetable garden that yields fresh produce for the young campers – and a wealth of knowledge about the life cycles of plants.

One recent afternoon, 5th– and 6th-graders from Tierra Linda Middle School in San Carlos sat quietly at the base of a 200-foot-tall redwood tree, nicknamed “Big Red.” When their teachers reminded them that it was time for lunch, the silence continued. After a few moments, a single voice among the students asked softly: “Can we stay here a little longer?” They did.

Hallie Mrizek, a high school student volunteering at Jones Gulch for the week, put shovels in the hands of students and coached them in a composting technique that mixes green plant waste with dried materials, such as leaves and shredded branches, to produce fertilizer for the garden.

“It’s more important than ever to get kids enough time in nature,” said Mrizek, who is interested in becoming a naturalist.

In a report last year, the California Department of Education highlighted the expanding roles that outdoor programs and science teachers play as children learn about the state’s changing environment. The report, “A Blueprint for Environmental Literacy,” called on education leaders to integrate knowledge of the environment into the Common Core State Standards (CCSS), the Next Generation Science Standards, history and social science standards, Career Technical Education (CTE) curriculum standards and “new accountability systems to integrate environmental literacy into classroom instruction.”

At Sierra Outdoor School, which is near the town of Sonora in California’s historic Gold Country, students have been watching dramatic changes in their immediate surroundings. Six months ago, the outdoor program’s site in the Stanislaus National Forest barely dodged a major fire that was heading straight toward it. At the same time, native pine trees in the surrounding forests have for several years been dying by the thousands as a result of a scourge wrought by bark beetles in California and the West.

Last month, Michael Olenchalk, director of the outdoor program, which is owned and operated by the Clovis Unified School District in Fresno County, watched as a crew of loggers cut down more than a dozen beetle-infested trees and loaded the logs onto trucks bound for a mill in Southern California that would salvage the logs.

Janelle McDonald, who runs daily operations of the program, said students who arrive at the camp often are so struck by the dynamic changes around them that they immediately ask her to tell them what is going on. That question leads to a series of other questions from the young scientists: Is this a healthy forest? What’s living? What’s not living? What do living things need to survive? During the week, students collect data in the field and discuss in class what steps are needed to help the forest survive.

After three days of immersing themselves in the problems facing forests, McDonald’s students begin to come up with solutions for making the local conifers healthier. “They become little foresters in action,” she said.

California’s largest outdoor school program, Camp Cuyamaca in San Diego County, serves 12,000 students a year. Like the Sierra outdoor program, it is dealing with the ravages of a beetle, known as the goldspotted oak borer. Since 2010, the invasive insect has killed more than 21,000 oak trees in Southern California.

Greg Schuett, principal of Camp Cuyamaca, said 6th-graders who come to the science camp are participating in research that may help solve problems associated with the beetle. The kids take photos and collect data, which is sent to a team of researchers at UC Riverside for analysis.

The 6th-grade scientists talk about the problem, how it started, and the impact it has had on the ecosystem. Students also explore possible solutions, such as warning campers in Southern California not to transport firewood, which could spread the infestation.

At Camp Cuyamaca, students’ social and emotional growth is as important as the science they are learning, Schuett said. The students share living quarters, eat together, participate in talent shows and go on night hikes, which are a popular group activity.

Students who are having trouble getting along with each other can get help resolving their conflicts using active listening techniques, and often they become friends. Students are rarely sent home, Schuett said. On the last day of a week-long science camp, special education teachers are overjoyed to see their students feeling connected to the larger group of students.

“All of us are in tears about what a difference this program makes to the kids,” Schuett said.