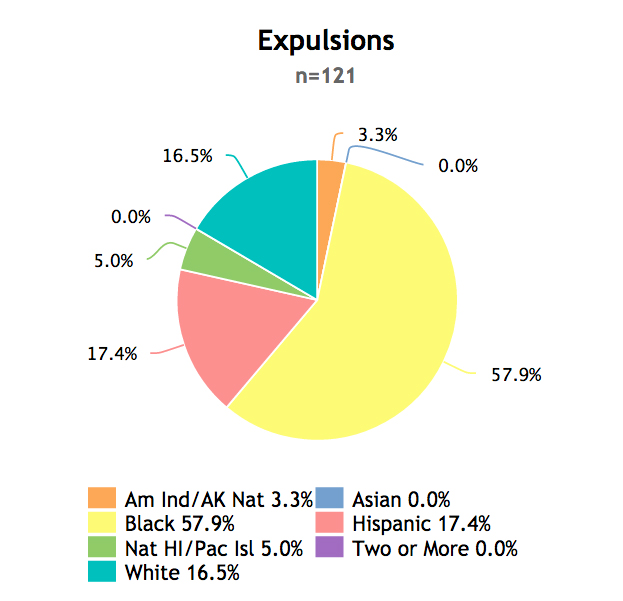 The NAACP has filed suit against a Northern California school district alleging the district has undermined the legal agreement it has with the civil rights organization to improve school discipline practices.

The district signed the agreement with the East County NAACP in March 2015 and admitted no wrongdoing. But in the 16 months since, “the school district has failed to provide the experts with necessary information to complete their reports and issue recommendations,” said Michael Harris, senior attorney at the National Center for Youth Law, which along with the Disability Rights Education & Defense Fund and the Equal Justice Society, brought the suit on behalf of the East County NAACP.

Antioch Unified Superintendent Stephanie Anello said in a statement, “We are disappointed that the local NAACP has chosen to file a lawsuit, rather than to work with the district on a fair and impartial review of district practices.” In the process of collecting data and providing access to the specialists, the district had questions about “methodology, student and staff privacy, fairness and impartiality,” she said. Those questions were raised in November 2015, but have yet to be addressed by the NAACP, she said.

“Unfortunately, it appears the NAACP and Disability Rights Education & Defense Fund are no longer interested in working with the district, and we are now faced with the distraction of defending the district against this unwarranted litigation when we should be focusing all energy and resources on serving our students and our community and on the school year ahead,” Anello said.

According to the lawsuit, staff at the Antioch Unified School District allegedly have let months go by without responding to email requests from the specialists for discipline data and information, have failed to help specialists set up interviews with administrators and teachers and have circulated the idea that teachers who talked about their racial biases with experts would have that information used against them by the district.

In 2011, African-Americans students made up 26 percent of the student body in Antioch Unified but accounted for 60 percent of suspensions, according to the federal Office for Civil Rights Data Collection. And while the total number of students suspended or expelled in the district has dropped in the last few years, the rate of suspensions for African- American students has remained essentially unchanged, the lawsuit said.

When Antioch Unified signed the 2015 agreement, then-Superintendent Donald Gill said the intervention by outside specialists marked a turning point in the district from a defensive posture to a problem-solving approach to school discipline. He said he hoped the district would serve “as a model for others who face similar challenges.” But Gill is no longer superintendent and the district no longer uses the law firm that negotiated the 2015 agreement. “The process has come to a halt,” said Willie Mims, education chair for the East County NAACP.

Selecting the outside experts took nearly a year before an agreement was reached, said Arlene Mayerson, directing attorney with the Disability Rights Education & Defense Fund. Ultimately the experts included leaders in their fields: Daniel Losen, director of the Center for Civil Rights Remedies at UCLA; Jeffrey Sprague, professor of special education and director of the University of Oregon’s Institute on Violence and Destructive Behavior; john a. powell and Ingrid Melvaer Paulin of the UC Berkeley Haas Institute for a Fair and Inclusive Society; and Rachel D. Godsil, director of research at the Perception Institute.

The 2015 agreement was not the first effort to change discipline and special education practices in Antioch Unified. In 2009, the district reached two agreements in response to complaints of discriminatory discipline practices — a settlement with the American Civil Liberties Union of Northern California and a resolution agreement with the U.S. Department of Education’s Office for Civil Rights. In 2010, the district also reached a resolution agreement with the Office for Civil Rights over complaints of discriminatory practices in special education.

The 2009 ACLU settlement included five years of training for staff and teachers, but despite this, the disproportionate rate of suspension and expulsion of African-American students continued, Mayerson said. Because the previous training had not addressed unconscious racial beliefs, Mayerson said, “we were trying to get at the roots of this and there is implicit bias, so that was one of the things we added to the mix.”

Implicit bias refers to the stereotypes that all people have about groups of people with whom they are unfamiliar. These sometimes unwitting biases can have a dramatic effect on the educational experiences of children, experts say, and can help to explain why misbehavior from some students is overlooked while other students receive harsh discipline.

An anonymous teacher survey about racial bias proved to be the most contentious issue, Mims said. While the outside experts stated that whatever teachers wrote about their feelings would be held in confidence, an Antioch administrator allegedly told teachers that admissions of bias would “cause the district to fire allegedly ‘racist’ teachers, and that the teachers would be ‘tools’ in a lawsuit against the district,” according to the lawsuit. The survey was never administered.

“The district has sabotaged the experts’ attempts to secure district employees’ participation in the social psychology measures,” the lawsuit stated.