Vaccination rates increased across the state for kindergartners in 2015-16 as schools reacted to the news that their daily attendance figures would be scrutinized if they had high numbers of students who were only partially vaccinated, according to a summary analysis by the California Department of Public Health, which released its school-by-school immunization data on Tuesday.

The kindergarten vaccination rate rose to 92.9 percent, an increase of 2.5 percent from the previous year, and a rise that the state agency attributed to a 2.5 percent drop in “conditionally admitted” kindergartners who have completed some but not all of their vaccinations. “We’re thrilled,” said Catherine Flores Martin, director of the California Immunization Coalition, a nonprofit group. “Vaccination rates are up, personal belief exemption rates are down and conditional admissions are down.”

The immunization branch of the California Department of Public Health has been working closely with the schools “to make sure they understand the impact of conditional admissions and how to do better at following up with parents,” she said.

Conditional admission is narrowly defined by the California Department of Public Health to cover students who are not currently due to receive a vaccination but have not yet completed their vaccination series. The category is widely misused and 90 percent of students in a recent sample who were conditionally admitted to school did not meet the criteria, the department said. 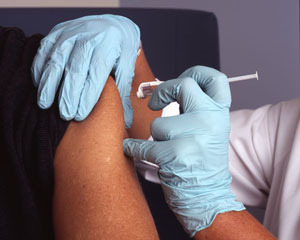 Among the interventions, which included strategies developed by the Alameda County Public Health Department, was to inform schools that 2015-16 financial and compliance audits will “scrutinize reimbursements for attendance at schools with higher rates of conditional entrance,” the California Department of Public Health said. That intervention and others prompted Alameda County to report the largest increase – 7.3 percent – in the rate of fully immunized students of any county in the state and a corresponding 7.2 percent reduction in the rate of conditionally admitted students.

The increased immunization rates were reported in fall 2015, which was before the 2016 effective date for Senate Bill 277, which eliminates the personal belief exemption to vaccinations, but during the second year of enforcement of Assembly Bill 2109, which required parents to obtain a signed letter from a health care practitioner if they sought not to vaccinate their children.

Despite improvements in vaccination rates, “a number of schools and communities remain at risk of contagion,” with 20 out of 58 counties in California reporting immunization rates below 90 percent for kindergartners, according to the California Department of Public Health summary.

A 90 to 95 percent vaccination rate is considered “herd immunity,” the rate necessary to protect a community — particularly those who are too sick or too young to be vaccinated — from an outbreak of many types of contagious diseases. Measles, which is highly contagious, requires a 95 percent vaccination rate to protect the community, but 31 counties don’t meet that standard — they have fewer than 95 percent of kindergartners fully immunized against measles, according to the California Department of Public Health.

Measles was declared eradicated in the U.S. in 2000 but an outbreak at two Disney theme parks in Anaheim a year ago was spread by unvaccinated children and adults, according to the California Department of Public Health. The outbreak resulted in 134 confirmed cases of measles in California. Measles cases linked to the Disneyland outbreak also were reported in Arizona, Colorado, Nebraska, Oregon, Utah and Washington, as well as in Mexico and Canada.