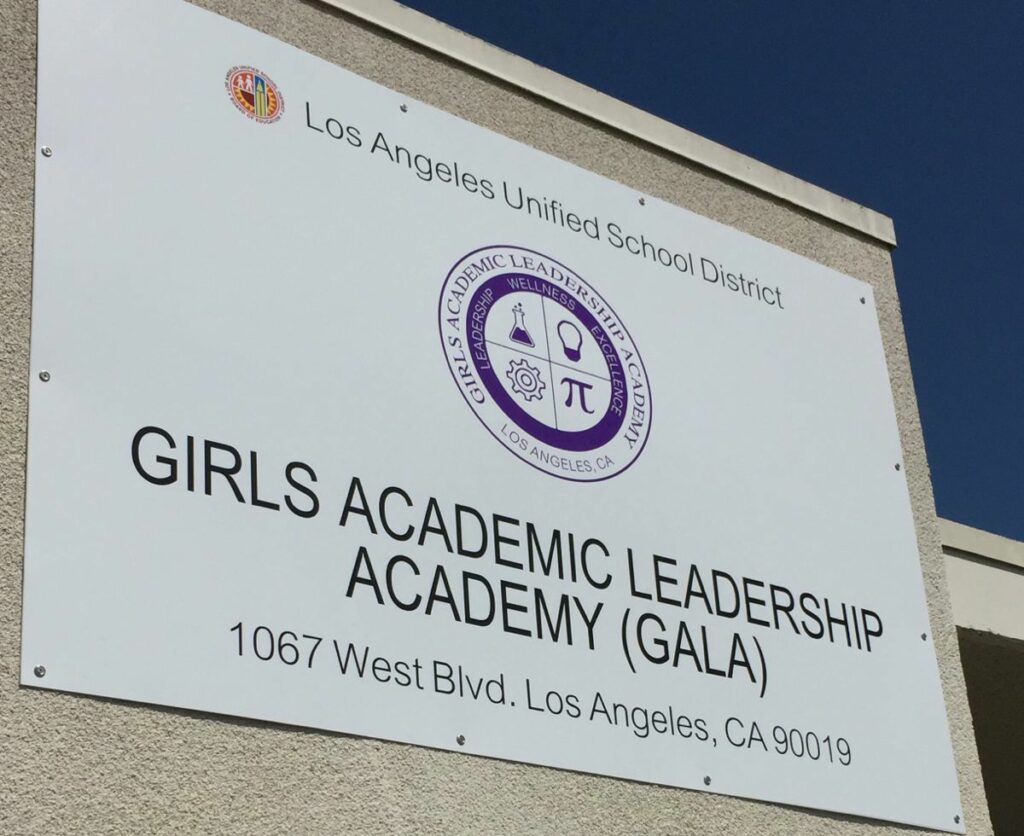 When the new school opens in Los Angeles less than a month from now, California will have its first conventional district school in nearly 20 years serving only one gender.

The Girls Academic Leadership Academy, known as GALA, a middle and high school in Los Angeles Unified, is built around a STEM curriculum – science, technology, engineering and math – as a way to attract more female students to subjects in which they are underrepresented. Its founding mission is to create an instructional atmosphere sensitive to ways girls learn that may be different from boys to develop self-confidence, emotional well-being and leadership skills. One of its primary goals is 100 percent college acceptance.

For L.A. Unified, which has been steadily losing student enrollment for more than a decade, largely to independent charters, the school  also represents a new approach to stemming an enrollment decline in the district. In recent years, the school board has approved a range of school models to draw more students, including magnets and dual-language immersion schools. The new school is another try, with about a third of the girls formerly enrolled in independent charters and private schools, according to Liz Hicks, the GALA principal.

The school is opening with a 6th grade and a 9th grade, with plans to add grades over the next three years and reach a full capacity of 700 in the 2019-20 school year.

The opening is coming at a time when there is a renewed emphasis in the state on improving science education, centered around California’s adoption of the Next Generation Science Standards in 2013. As State Board of Education members Michael Kirst and Trish Williams have noted, the new standards “hold promise to reduce opportunity gaps for girls and others who have been historically underrepresented in science education and careers.”

“We’re hoping to capture their confidence in science and math and inspire them to go on to STEM careers,” said Liz Hicks, principal at the Girls Academic Leadership Academy.

L.A. Unified has four other schools serving girls only – three public schools for pregnant students and young mothers and a charter school, making GALA the state’s only single-gender school operating as a traditional district school since the late 1990s, when a pilot program in six districts foundered within a few years after encountering administrative problems, a lack of training for teachers and inadequate financial support.

With its unique status in the state, the new school stands in the breach of an ongoing national debate as to whether the benefits of single-gender education outweigh the disadvantages. While some experts say separation by gender aids academic progress and emotional development, others argue that it confirms stereotyping, legitimizes institutional sexism and, in California, violates state law.

California law, in fact, explicitly prohibits segregation in public schools based on sex. That’s not the case with federal law, which allows single-gender public schools if students of the other sex who would otherwise want to attend are accommodated in their own single-sex school or a coeducational school that satisfies their academic goals. L.A. Unified intends to open an all-boys, STEM-focused school in 2017, with an additional emphasis on English language arts.

Recognizing a possible conflict between state and federal law, L.A. Unified applied to the state for a waiver to open the new school; the state, in effect, deferred to federal law, telling the district a waiver wasn’t necessary provided the school “complies with federal Constitutional requirements regarding nondiscrimination,” said David Holmquist, the district’s chief lawyer. That wouldn’t preclude, however, a male student from suing the district in state court to gain admission to GALA this year.

It’s unclear how many single-gender public schools are operating around the country. A spokesman for the Department of Education in Washington said the department has no accurate numbers because it does not “collect data on the gender of students within schools.” Private groups, including the National Coalition of Girls’ Schools, a membership organization based in Charlottesville, Virginia, that includes GALA, offer conflicting figures.

GALA’s incoming classes of 100 students each will occupy their own two-story building on the mid-city campus of Los Angeles High School, a space once occupied by a co-located charter school. Seven of the eight teachers who will start next month are transferring from other L.A. Unified schools, and the students, Hicks said, come from 39 zip codes in the metropolitan area and from 51 different elementary and middle schools, with an ethnic breakdown of 30 percent Latino, 30 percent white, 23 percent African-American, 10 percent Asian and the rest who identified as “other.”

In her initial proposal to the board, Hicks cited an array of research that supports the academic and emotional value of single-gender education, especially for girls. One report, a 2005 review of 40 research studies conducted by the U.S. Department of Education, concluded, “Researchers found positive effects of single-sex schooling on all-subject achievement tests. In addition to improved academic achievement, other studies have also demonstrated that girls experience improved self-esteem and focus when enrolled in a single-sex environment.”

Those findings won the support of Superintendent Michelle King and her predecessor, Ramon Cortines. When the school board approved the school in 2015, Cortines said, “Not only will this new school help our students discover their potential, think critically and develop important intellectual skills, it will also prepare them for college and beyond.”

But others question whether GALA, or any other single-gender school, makes much of a difference in achieving academic equality between sexes.

“People are trying to do a good thing,” said Susan Klein, Education Equity Director for the Feminist Majority Foundation. “But it’s not the most effective way to get girls involved and sustained in STEM subjects, or anything else.”

Klein’s organization and the ACLU have been among the strongest voices against single-gender schools, questioning their effectiveness and legality. A 2014 report for the American Psychological Association that examined data from 184 studies reached this conclusion: “Overall, does (single-sex) schooling confer the advantages claimed by its proponents? According to this meta-analysis, the answer appears to be no, or not much.”

Hicks said when she was researching the proposal to the board she was surprised to find so much opposition to single-gender public schools.

“For me,” she said, “it was always an economic and equity issue for public school students. They don’t have access to the kind of model we’re developing unless they pay $30,000 (for a private school). We’re hoping ours becomes a model for other schools around the state.”