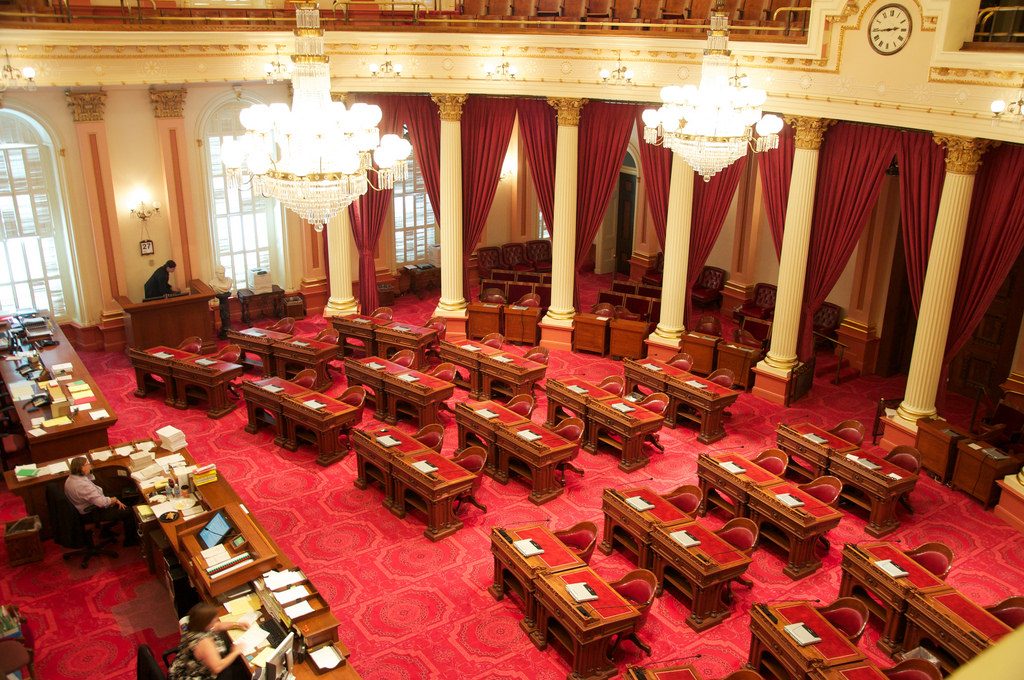 Updated, Oct. 4: With a crush of bills dispensed with last week, the year’s scorecard is complete. Here is the final update of a dozen bills that EdSource tracked in the final weeks of the legislative session. They include a challenge to the State Board of Education’s framework for a school accountability system (AB 2548), which Gov. Jerry Brown vetoed, and a bill to make it easier for districts to build teacher housing, which Brown signed.

Many of the major education bills that were introduced at the start of the year, such as teacher evaluation reforms, died or, like more money for college preparatory courses, were incorporated into this year’s state budget. Others survived the obstacle course that is the legislative process or quietly disappeared in the final week of the session.

Along with the bills on our list, we also wrote separately about the following bills:

Why it’s important: There are only a half-dozen for-profit online charters in the state; the apparent target of the bill is K12, Inc., the largest operator of online schools in the state, serving 15,000 students through California Virtual Academies, a chain of nonprofit schools that K12 created and controlled as the sole-source provider of curriculum. The office of the California attorney general fined K12 $8.5 million after a lengthy investigation into its practices. Bonilla has said, “Taxpayer dollars should be spent on academic services and improving the educational experience of California students, not on enriching a company.”

Why it’s controversial: An organization of online school parents asserts that their kids thrive in online charters, but a 2015 study by the group CREDO of Stanford University found that overall performance of online charter students is poor. Gov. Jerry Brown, however, vetoed a similar bill last year, saying it could be interpreted to restrict the ability of nonprofit charter schools to continue using for-profit vendors.

Status: Died in the Senate. The California Charter Schools Association and charter opponents agreed that for-profit online charters should be banned. However, Bonilla was unable to negotiate a deal on the bigger stumbling block: how to prevent for-profit companies from managing nonprofit online schools. The issue will likely be back in 2017.

SB 322, by Sen. Mark Leno, D-San Francisco, would place new due-process obligations and reporting requirements on charter schools before they can suspend and expel students. 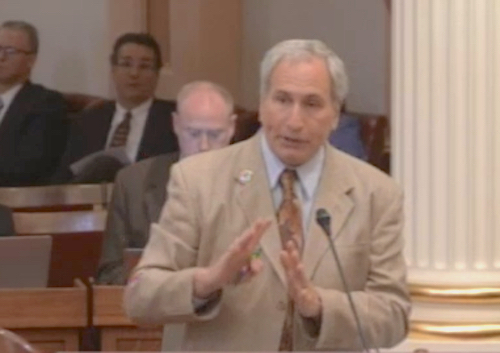 Why it’s important: There has been legislation and pressure for all public schools to lower suspension rates, which are disproportionately high for black and Hispanic students. Charter school critics claim that some schools use suspension policies to push out low-performing students.

Why it’s controversial: The California Charter Schools Association opposes the bill as an effort to re-regulate charters, which, it says, should have latitude to create their own suspension and expulsion policies.

Status: Died in the Assembly, with 31 members voting in favor, 34 against and 15 members not voting.

SB 1156, by Sen. Bob Huff, R-San Dimas, would enable students in some low-performing schools to continue to transfer to better schools within and outside of their districts under the 2010 Open Enrollment Act.

Why it’s important: Identification of eligible schools had been based on low scores on the now-suspended Academic Performance Index. The bill would align eligibility to the new state school accountability system identifying the lowest-performing 5 percent of schools.

Why it’s controversial: The Legislature passed the Open Enrollment Act in a failed effort to get a federal Race to the Top grant. Supporters call it an important avenue of choice for parents whose children attend low-performing schools. The California School Boards Association and districts that might lose students oppose the bill.

Status: The bill passed the Senate and Assembly unanimously, but the Department of Finance opposed it, The department cited potential costs to the state of notifying all parents in low-performing schools of their transfer option and also called the bill premature, since the new state school accountability is still being developed. With a veto from Gov. Brown likely, Huff withdrew the bill, but the issue will likely return in 2017,

Related bill: SB 1432, also by Huff, would have continued, with revised conditions, Districts of Choice, a little used program in which school districts can open up their schools to students from surrounding districts. Without citing a reason, the Assembly Appropriations Committee killed the bill. “The future of nearly 50 school districts has been thrown into doubt and thousands of California children have just been denied the best education we can give to them, and the reason is purely a political one,” Huff said in a statement.

SB 799, by Sen. Jerry Hill, D-San Mateo, would lift the limit on the percentage of the general fund that a district can hold in reserve. The amount would be based on a district’s enrollment.

Why it’s important: School districts say that the limit, which has yet to be imposed but could be in future years under certain fiscal conditions, would jeopardize districts’ financial stability, forcing them to spend down savings needed for future emergencies.

Why it’s controversial: The reserve cap was a surprise deal in 2014 budget negotiations between the Brown administration and the California Teachers Association, and continues to anger school district officials. CTA argues districts had been building excessive reserves that should be spent on student services and says the issue is overblown, since districts already have ways to justify exceeding the cap.

Status: The bill languished throughout the session; behind-the-scenes efforts to reach a possible compromise on maximum levels of district reserves failed again this year.

AB 2548, by Assemblywoman Shirley Weber, D-San Diego, would give the Legislature a role in overseeing the new statewide school accountability system, based on multiple measures of school success, by locking in statute the work that the State Board of Education is doing on its own through rules and regulations. It would place more emphasis on test scores for identifying low-performing schools needing assistance than the state board favors, and it would require a summary ranking of a school’s performance, enabling parents to readily compare schools – a position the state board opposes.

Why it’s important: The bill would limit future actions by the state board to deviate significantly from the accountability system it is currently drafting.

Why it’s controversial: Gov. Brown favors giving members of the state board, whom he appoints, flexibility to do their work through regulations. If he views the bill as constraining, he’ll likely veto it.

Status: Gov. Brown vetoed the bill, saying in his veto message that it was “unnecessary and premature” to second-guess the state board’s judgment in approving the new accountability system in early September (see EdSource article).

AB 2835, by Assemblyman Jim Cooper, D-Elk Grove, and Sen. Richard Pan, D-Sacramento, would require school districts and other employers of public employee unions to hold annual in-person orientations for all new workers, at which unions would be allowed to make a 30-minute pitch for union membership.

Why it’s important: The bill was conceived as a critical response to Friedrichs v. California Teachers Association, a lawsuit that challenged the obligation of public employees to pay unions the cost to represent them. Until the death of Justice Antonin Scalia in January, it appeared the U.S. Supreme Court was poised to overturn mandatory union fees. That’s no longer the case, but the bill remains a top priority of CTA and other unions.

Why it’s controversial: The bill is prescriptive about how and when the orientation sessions must be held – and potentially costly, argues the California School Boards Association, which opposes it.

Status: The bill died without fanfare on the final days of the session. .

State Seal of STEM for diplomas

AB 2072, by Assemblywoman Ling Ling Chang, R-Diamond Bar, would allow California high school graduates who have demonstrated high achievement in a STEM subject — science, technology, engineering and math — to receive a “State Seal of STEM” attached to their diplomas and transcripts.

Why it’s important: The bill aims to encourage more students to pursue studies in STEM by providing a special recognition that colleges and universities could review in the admissions process or that businesses could consider when hiring workers.

“Providing students with a symbol of their accomplishments can benefit not only their personal drive and their self-esteem but also overall marketability,” Chang said.

Status: The Senate Appropriations Committee voted unanimously to suspend the bill, in part because the first results from new state science assessments won’t be available until 2019-20.

AB 2246, by Patrick O’Donnell, D-Long Beach, would require school districts that serve 7th- through 12th-grade students to adopt a suicide prevention policy that specifically addresses prevention procedures for youth who are at high risk of mental health issues and suicidal thinking, including those who are bereaved, homeless, experiencing discrimination based on sexual orientation or struggling with substance abuse.

Why it’s important: About one in five students in 9th and 11th grade reported they had seriously considered suicide, according to 2013-15 data from the California Healthy Kids Survey conducted by the research group WestEd. A teacher is the No. 1 person a student would contact to help a friend who might be suicidal, according to a Jason Foundation study cited by O’Donnell.

Why it’s controversial: The creation of a suicide prevention policy would be a new state mandate with unknown costs. The bill requires the California Department of Education to create a model policy, although the author notes that the state could adopt an existing model policy recommended by the Trevor Foundation. In turn, districts could create their policies using the state’s policy as a guide. The policy would address the need for teacher training on procedures for suicide prevention, intervention and follow-up. No funding is attached for putting the policy into action. Under existing law, the state “encourages” schools with students in middle school through high school to provide suicide prevention training at least once to each school counselor during the course of employment.

AB 1426, by Assemblyman Jim Cooper, D-Elk Grove, would have raised After School Education and Safety Program per-pupil reimbursement rates from $7.50 to $8.50 per day effective July 1, 2017.

Why it’s important: After-school programs serve more than 400,000 students statewide. Annual funding for the program of $550 million hasn’t changed in a decade, and advocates say reimbursement has fallen far below costs. With the state’s minimum wage set to rise from $10 to $12 by 2018, advocates predict that a third of programs could shut down within two years.

Why it’s controversial: Gov. Brown did not include $73 million in additional funding needed to accommodate current enrollment in this year’s state budget, despite persistent lobbying.  This bill would have raised daily rates without providing additional funding. (see note below)**

SB 1413, by Senator Mark Leno, D-San Francisco, would establish the Teacher Housing Act of 2016 to help with the acquisition, construction and preservation of affordable housing for teachers or other school district employees.

Why it’s important: Several districts in the Bay Area have established or plan to build rent-subsidized housing for school employees. By explicitly authorizing districts to develop housing on district-owned property for their employees, the bill will enable projects to qualify for federal low-income housing tax credits, an incentive for builders to become involved.

AB 2016, by Luis Alejo, D-Salinas, would require the State Board of Education to adopt a model curriculum in ethnic studies by April 2020. It would enable schools to create courses reflecting demographics in their communities and to incorporate ethnic studies courses that the University of California has certified as satisfying college admissions criteria.

Why it’s controversial: Gov. Brown vetoed a similar bill last year with objections that Alejo has attempted to address.