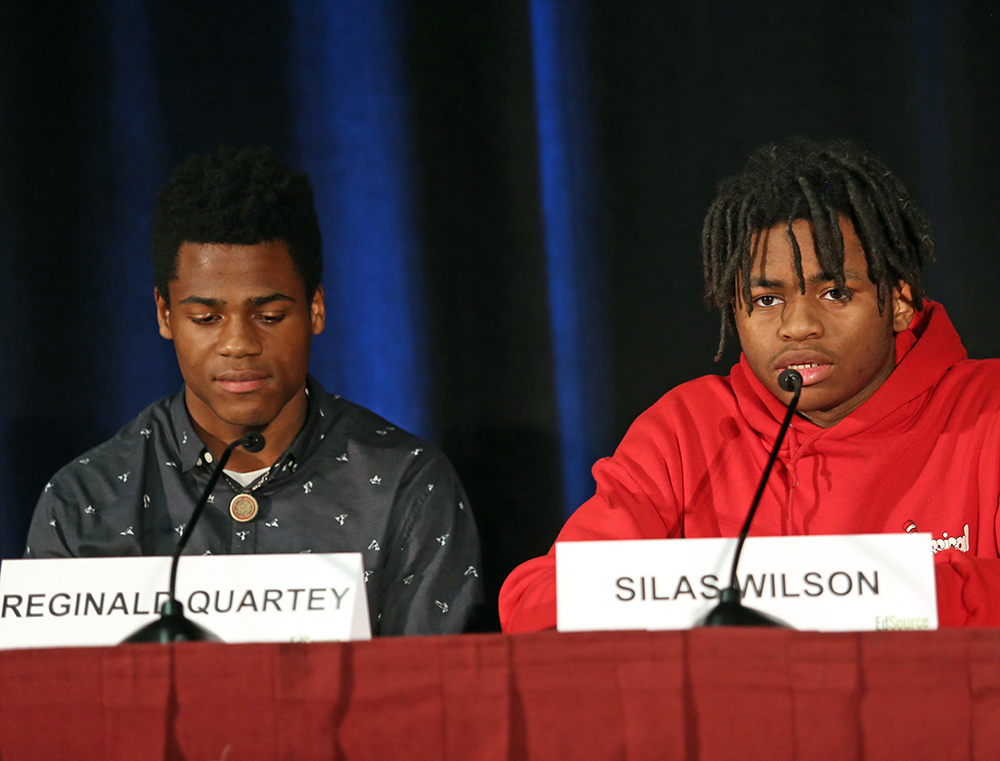 FERMIN LEAL/EDSOURCE TODAY
Students Reginald Quartey (left) and Silas Wilson talk about their experiences in a panel on ways to improve school climate during EdSource's Symposium 2016.

FERMIN LEAL/EDSOURCE TODAY
Students Reginald Quartey (left) and Silas Wilson talk about their experiences in a panel on ways to improve school climate during EdSource's Symposium 2016.

Reginald Quartey handed in a perfectly fine paper to his English teacher at Oakland High School last year, and his teacher handed it back with a less than stellar grade. To Quartey, this was a good thing — to be seen as the thoughtful, ambitious student he is.

“He saw that I was capable of turning in papers that had deeper analysis, so he graded me tougher than most of my classmates,” said Quartey, a student advocate with the nonprofit group Californians for Justice.

For Quartey, who is 17 and on track to become the first in his family to go to college, the key mechanism for improving K-12 schools can be distilled into a single word: relationships. And how California schools find the money, time and will to support these relationships — up and down the education hierarchy — will help to determine the success of school reform, according to panelists who discussed social and emotional factors in education last week at an EdSource symposium in Oakland.

“How we relate to each other in the building is our social and emotional learning,” said Michael Essien, principal of a San Francisco middle school.

Both the new federal education law and the new state school accountability system call out the need to address the “whole child” in instruction, discipline and assessment. But many panelists spoke instead of the need to develop what might be called the “whole adult” — school staff who have the time, training and self-awareness to manage an educational culture in flux.

The culture shift includes moving away from rote-learning and toward Common Core State Standards-inspired discussions of ideas and moving away from a zero-tolerance discipline policy toward a nuanced look at why students are disengaged and disruptive.

“Today, it’s a new day,” said Ellen Moir, founder and chief executive officer of the New Teacher Center, a Santa Cruz-based nonprofit that offers teacher mentoring programs to districts across the country. Moir called developing the social and emotional skills of the adults who work in schools “the single most important area we can be working on together.” 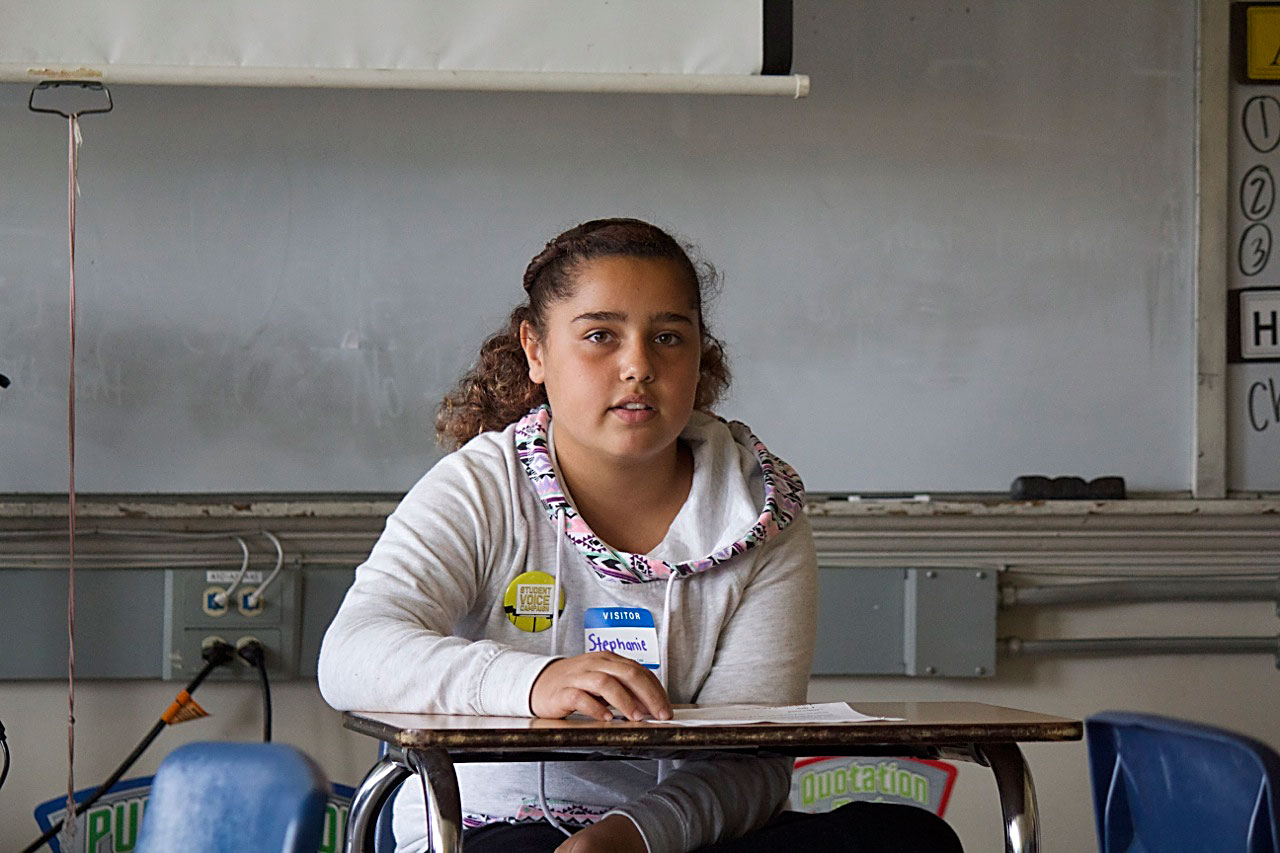 ‘Destined for great things’: Low-income students ask educators to believe they can succeed

Teachers who change jobs often report high levels of dissatisfaction with administrators, she said. “They are in communities where they don’t feel supported, communities where they don’t feel that their voice matters,” she said. Like students, she said, “teachers are hungry for relationships, too, and so are principals and so are the district leaders.”

She recalled the advice she gave recently to a group of mentors: “The single most important thing you can do for your new teachers is care.”

Social and emotional learning is academic jargon for what many teachers already do — teach students how to listen respectfully, manage stress and set personal goals. It includes clear instruction about expectations and the reasons behind them, such as “We are quiet in the library because students are concentrating on reading.” And the idea, according to the Collaborative for Academic, Social and Emotional Learning, is to embed these concepts into academic instruction.

Most often, social and emotional learning is directed at students. But Michael Essien, principal of Martin Luther King Jr. Academic Middle School in San Francisco, said it has everything to do with how staff and students treat each other.

“How we relate to each other in the building is our social and emotional learning,” Essien said. “It is literally the relationship that exists between teachers and students in action.”

When he was assistant principal, he said, disciplinary referrals to the office were soaring. With 520 middle school students, the school had 1,963 office referrals one year and 2,150 referrals the next, adding up to “a significant amount of time” out of the classroom.

“It was my job to figure out what was going on in the relationship between students and teachers,” he said.

What he found, he said, was an “escalation cycle.” A middle school student would refuse to do what the teacher said — open a book, for instance. The teacher would confront the student to the effect of: “Don’t do that again. I’ve told you before. Stop it right now or I’m going to have to call home.” For the student, Essien said, those words might stoke confrontation. The student would talk back. The teacher would argue. Both were caught in a cycle of building emotions.

Teacher training ensued: how to de-escalate a conflict by using a neutral tone of voice, speaking quietly, allowing a student physical space and choosing words that describe the situation, rather than invoke the teacher’s authority. If that doesn’t work, Essien said, teachers are told to stop talking with the student, pick up the phone to the office and call for a “push-in.” That’s a visit to the classroom from a school counselor, administrator or other staff member, who then sits with the student.

Perhaps nowhere is the need for relationship-building greater than in matters of school discipline, Quartey said. He told a story. “One thing our school does are tardy sweeps,” he said, describing school staff roaming the building and courtyards and detaining students who are not in class. “Tardy sweeps are a way to ‘encourage’ students to be on time to their classes,” he said. “How does making a student miss the majority of their class teach him to be on time?” he asked.