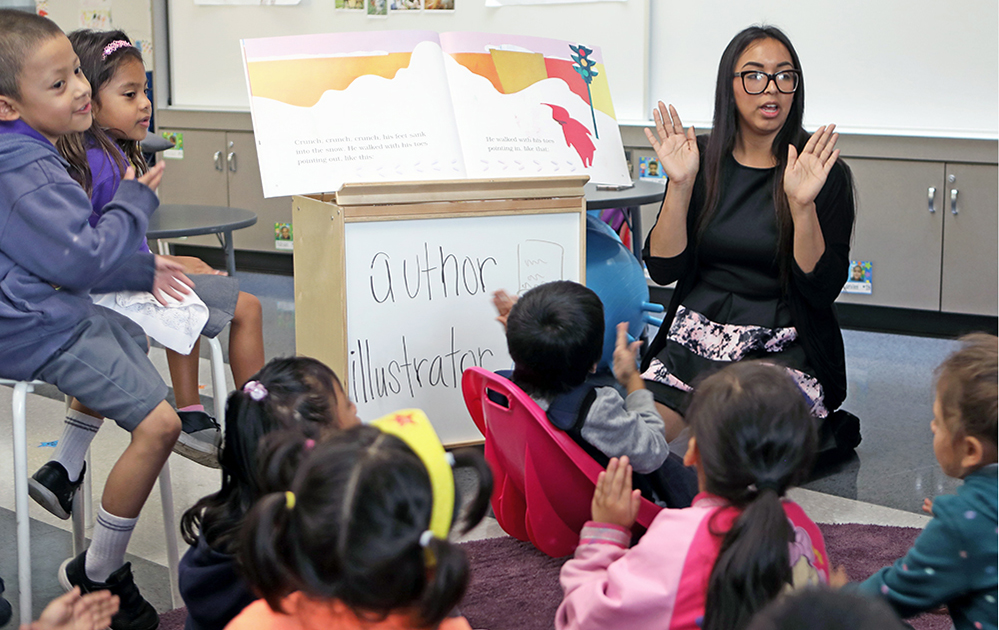 At a time when districts across California are reporting shortages of teachers in a number of subject areas, enrollments in teacher preparation programs in California have increased for the first time in 13 years.

The increase could be the result of a number of factors, including greater interest among prospective teachers in entering the profession, the success of more aggressive recruitment efforts and an abundance of job openings for teachers, especially in high-needs areas such as special education, bilingual education, and math and science.

According to a new California Commission on Teacher Credentialing report, enrollments statewide increased from 18,984 in 2013-14 to 20,881 in 2014-15, a nearly 10 percent increase. Because there is a one-year lag time in publishing data, the commission does not have figures for the 2015-16 school year.

“After years of news being about teacher layoffs, the story has changed,” said Mary Vixie Sandy, executive director of the state’s Commission on Teacher Credentialing. “There is greater interest in hiring teachers. So you’re seeing more students enrolling in credentialing programs.”

She said these figures are similar to previous trends when news of teacher shortages were followed by jumps in enrollment in credentialing programs.

One difference is the ethnic and racial makeup of teaching candidates, which is more diverse now than at any previous time, she said. More than half of students in teacher preparation programs in 2014-15 were nonwhite or white plus another race.

However, the figures show that the traditional gender pattern in who goes into teaching remains largely unchanged. Only 28 percent of prospective teachers in teacher preparation programs are men.

Of the total numbers, 8,837 were enrolled in programs at the California State University, and 883 were in University of California, according to an earlier report by the Learning Policy Institute. The principal author of the report is Linda Darling-Hammond, president of the Learning Policy Institute and Gov. Jerry Brown’s appointee to chair the state credentialing commission.

Officials at California State University predict they will produce enough teachers to help eliminate the shortage altogether within five years.

Joan Bissell, CSU’s director of teacher education and public school programs, said the 23-campus system has seen a 10 percent increase in enrollment in credential programs in 2013-14 and in 2014-15. Figures for 2015-16 are currently not available, but Bissell said preliminary estimates show the trend continuing upward.

She attributes the growth in enrollment to stronger recruiting efforts and an increase in scholarships and financial aid.

They include the recent $10 million Bechtel Foundation grant to prepare more math and science teachers, and the new federal TEACH Grants, which provide qualified candidates up to $4,000 annually for four years.

Additionally, Bissell said CSU has expanded support for new teachers after they begin their career. This includes CSU’s EduCorp pilot, now in five campuses. Through the initiative, undergraduate teaching students receive expanded support from advisers, have greater opportunities to interact with education professors and teachers in the field, and are offered a wide range of field experiences in K-12 schools prior to applying for a teacher credential program.

Campuses are also now working to streamline the teacher preparation process by allowing students to simultaneously earn a credential and a master’s degree.

“We now have a comprehensive system in place in an effort to support the creation of a new crop of teachers,” she said.

Despite the increases, enrollments are still far below the all-time high of 77,705 in 2001-02 and almost certainly won’t be sufficient to keep up with the demand for new teachers in a number of subject areas.

Another problem noted by the Learning Policy Institute report is that “new teaching candidates are not necessarily choosing the fields and subject areas in which there are large numbers of vacancies, or choosing to teach in the regions where the shortages are most pronounced.” Most of the increase, the report said, occurred in multiple-subject credentials, which are mostly needed to teach in elementary schools, “an area in which most districts have not noted shortages.”