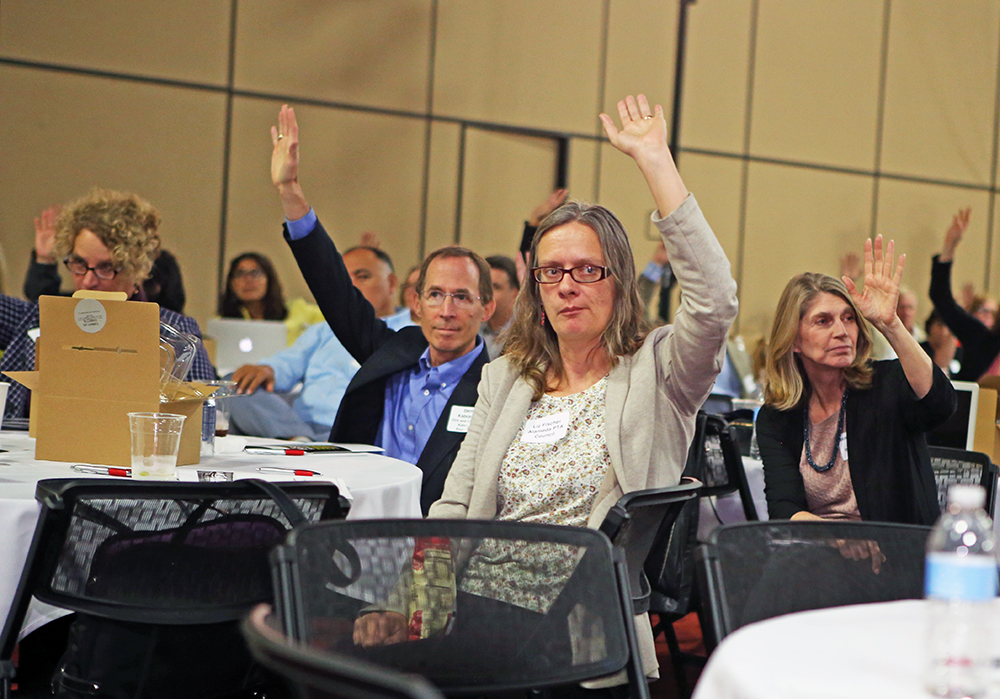 FERMIN LEAL/EDSOURCE TODAY
Guests at EdSource's Symposium 2016 raise their hands when asked if they could think of an adult who supported them in achieving their education goals growing up.

FERMIN LEAL/EDSOURCE TODAY
Guests at EdSource's Symposium 2016 raise their hands when asked if they could think of an adult who supported them in achieving their education goals growing up.

Several education reforms currently underway in California have the potential to result in improved student achievement, but more work is needed to ensure that they achieve their goals, speakers at EdSource’s annual symposium said Thursday.

Nearly 600 education leaders, advocates, teachers and parents attended the event, which EdSource has sponsored in one form or another since its founding in 1977. The theme of this year’s symposium was “Making It Work: Implementing California’s New Vision for School Success.”

The symposium was conducted in partnership with the Learning Policy Institute.

“The real shift that’s going on in California is ultimately not a policy shift,” said David Plank, executive director of the Policy Analysis for California Education organization known as PACE. “What’s really at stake here is a culture shift.”

Plank said the state is “trying to move from a system of compliance (to state and federal regulations) to one of continuous improvement.”

That culture shift he referred to includes transitioning from an accountability system that focused largely on test scores to one looking more broadly at student and school success in multiple areas, including social and emotional learning and school climate.

California’s new accountability system, based on multiple measures rather than mainly on test scores, represents a model for the nation, said Learning Policy Institute President and CEO Linda Darling-Hammond.

Legislative Analyst Mac Taylor said most districts are now finally getting more funds from the state than they did in 2007–08, before the budget crisis inflicted by the Great Recession hit the state. Average funding per student in California at that time was $10,066 in inflation adjusted dollars. In the current  school year, it is $10,657, a 6 percent increase.

However, Taylor underscored that the $10,657 figure was the average across the state’s approximately 1000 districts, but that there are significant differences among those districts in how much they receive per student from the state. He noted that the state’s Local Control Funding Formula provides additional funds  to districts with high needs students, and that those with few low-income students or English learners would receive far less.

“If you don’t have a lot of low income and English learners, you are not going to experience this kind of rebound,” he said. “It is a different story when you are looking at individual districts and what is happening at the state level in aggregate.”

Ramona Bishop, superintendent of Vallejo City Unified, said her district has a high percentage of low-income students and English learners. As a result, the district has received about $22 million in supplemental funding to better serve those students.

“We have really done a lot of organizing around, ‘What should we do with this gift from the state?’” she said. “We realize that if districts like ours are not successful, it will be a failed experiment.”

She encouraged districts to share what’s working and what’s not with each other.

Sujie Shin, director of research and data assessment for the California Collaborative for Educational Excellence, said her agency was looking at what is working across the state, nation and in other countries. She said it was not looking for a “silver bullet” to tackle California’s  educational challenges. She referred to several “local control and continuous improvement” workshops the collaborative will be offering in multiple locations in November to assist a range of stakeholders in implementing the reforms.

Christopher Edley, Jr., co-founder of the Opportunity Institute and professor at the UC Berkeley Law School, said California needs to increase the amount of money it spends on education and to genuinely involve parents and other stakeholders in discussions about school reforms. He also worried about what impact inadequate collection of data will have on implementation of the reforms.

“There’s been virtually no investment in data systems, so we will never know whether the great gamble will succeed,” he said, referring to California’s reform efforts. “We’re not seeing an investment of resources. We’re seeing the repackaging of the status quo in new clothes.”

Jennifer Thomas, president of the San Jose Teachers Association, said teachers need professional development and time to collaborate with other teachers to effectively implement the state’s reforms. She said they have been largely left out of policy and budget discussions.

“The only people less empowered in these processes than parents are teachers,” she said. “There is so little concern about what teachers think.”

Michael Kirst, president of the State Board of Education, said the state is taking a deliberate approach to reforms.

“The watch words of state leadership have been patience, persistence and humility,” he said. “We’re ready to say we can’t exactly predict what’s going to happen, but we want to not zig zag the policy lines. We want to make these decisions in a way that doesn’t jerk the districts around.”

At the same time, he said the state was willing to make changes based on input it receives from key constituencies.

The event also included panel discussions about school climate, growth mindsets and social-emotional learning and the future of testing in the state.

Louis Freedberg, executive director of EdSource, concluded the symposium by saying the results of California’s reform efforts may not be seen for several years, but that should not be considered a reason to abandon them. He praised the “incredible talent base we have in California,” including those who spoke at the symposium.

“All of you who are doing this work make me very confident we can make these reforms work,” he said. “But it’s going to take work.”

In addition to the Learning Policy Institute, the symposium was sponsored by the Stuart Foundation, School Services of California, and the Silicon Valley Community Foundation