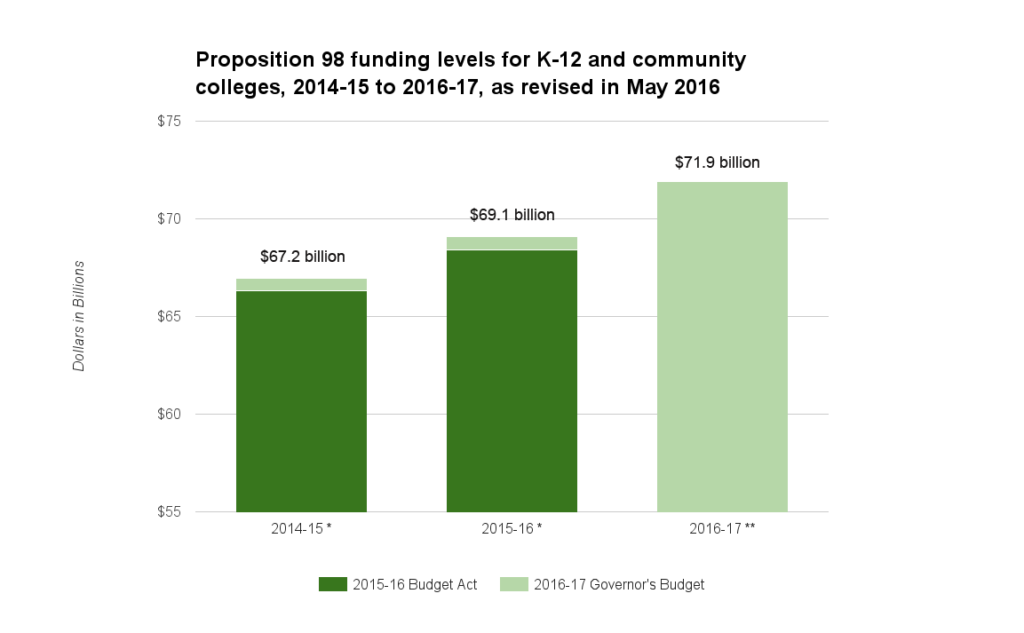 Despite lowered state revenue projections and Gov. Jerry Brown’s prediction that an economic recession could come any moment, state funding for K-12 and community colleges will rise nearly $3 billion for the fiscal year starting July 1, under the May revision of the 2016-17 state budget released on Friday.

A $1 billion drop in expected revenue in April provided the rationale for a fiscally cautious Brown to repeat his warning to legislators not to add new spending, including for early education. Based on historic averages, a recession should have started already, so the state is living on borrowed time, he said. And California, which relies on taxing the wealthiest 1 percent, is subject to huge revenue plunges during a recession. “There are no halcyon days ahead,” he said.

The Brown administration is now projecting $2 billion less for next year than was forecast in January, resulting in less money to put aside in the state rainy fund. But that decline won’t affect Proposition 98, the formula that determines education funding. Prop. 98 funding would increase to $71.9 billion in 2016-17 or $2.8 billion more than the revised total for the current year, a 4 percent increase. Proposition 98 spending would be $3.5 billion more than the Legislature appropriated last year.

The revised budget would steer most of the additional money for K-12 to the Local Control Funding Formula, the state’s education financing system that provides districts with extra dollars for students with the highest needs: English learners, low-income children and foster youths. Districts would receive an additional $2.9 billion ($100 million more than in Brown’s January budget). With the new money, the formula would be 96 percent funded, which the Brown administration defines as restoring all districts to the inflation-adjusted amounts they got before the 2009 recession. Districts with high proportions of high-needs students already have received more than that.

Brown is also proposing $1.4 billion in one-time spending for next year. That’s less than half of the $3.6 billion one-time spending in this year’s budget. Brown’s budget summary encourages districts to use the money for a range of purposes: teacher training with extra help, known as induction, for beginning teachers; textbook and technology purchases; and building maintenance districts have postponed. But under state law, they can use the dollars however they want.

Extending Proposition 30’s income tax increase on the state’s highest earners, a measure that will be on the November ballot, would soften the impact of a recession, Brown said, while refusing, as he has in the past, to endorse it. Saying that he sold Proposition 30 to voters in 2012 as a “temporary tax,” he said, “I will let voters make up their minds. Prop. 30 will just keep things the way they are. I am prepared to manage with or without it.”

Assuming no recession and the expiration of Proposition 30 after 2018, the Department of Finance forecasts Proposition 98 revenue rising to $74.5 billion in 2017-18, then flattening the following year.

K-12 schools receive about 89 percent of Prop. 98 revenue, with community colleges receiving most of the remainder and less than 1 percent going to other state education agencies. The projected $2.8 billion increase in total Prop. 98 funding for next year over the revised Prop. 98 level for 2015-16 is 4.1 percent more.

Responding to an acute projected teacher shortage in hard-to-staff areas such as special education, math and science, the Legislature is considering several bills aimed at boosting the number of teachers, including loan forgiveness programs and teacher residencies in low-income districts. Brown hasn’t taken a position on the bills, but his budget reflects his preferences. It includes limited funding to revive CalTeach, the California Center for Teaching Careers. With $2.5 million, the Commission on Teacher Credentialing would promote teaching as a profession to high school and college teachers, direct candidates to teacher preparation programs and reach out to out-of-state teachers.

Brown also proposes $10 million in one-time grants to colleges and universities to develop four-year programs producing both an undergraduate degree and a teacher credential. California steered away from this approach decades ago, when it required teacher candidates to obtain a bachelor’s degree before obtaining a credential through a one- or two-year post-graduate program. But the added expense and time of getting a credential have become a disincentive for pursuing teaching.

The 23-campus California State University system would receive an extra $25 million to improve what are now low graduation rates, especially of low-income students, under the revised budget. The money would be contingent on the CSU system “articulating clear, coherent plans for the university as a whole and for each campus” to boost four-year graduation rates and to get low-income students who receive federal Pell grants to graduate at rates similar to more affluent students who do not receive those grants.

Of the students who started as CSU freshmen in fall 2011 and enrolled in 12 or more units in their first term, only 19 percent graduated within four years. Only 12 percent of Pell‑eligible students graduate within four years, compared with 25 percent of non‑Pell‑eligible classmates, according to statistics released by the governor. The overall graduation rate increases to 57% after six years, the CSU says.

In a statement Friday, the CSU said it “applauds the governor for making degree completion a top state priority” and “remains committed to reaching even more ambitious degree completion goals and closing the achievement gap among low-income and under-served students.” But CSU officials added that they are still seeking an additional $101 million in general funding for such things as expanding enrollment and adding classes.

Proposed general fund spending for higher education remained relatively stable. Brown’s revised budget calls for $14.3 billion in general revenues for community colleges, Cal State, University of California and the Cal Grant financial aid program. That is just $25 million, or 0.2 percent, higher than last year’s spending.  It is, however, $267 million less than the January proposal, a drop that officials attribute mainly to more federal money available to subsidize the Cal Grants.

For students and their parents, the good new bottom line is that the freeze on tuition for all three systems of colleges and universities will continue for another year under Brown’s plan.

Reactions to the revised May budget

“The revised budget remains positive for California’s schools, and demonstrates the Governor’s ongoing commitment to continuous improvement in public education through the Local Control Funding Formula. The investment in LCFF allows schools to continue building on their efforts to meet the needs of students in their local communities. While this budget represents an important step in the right direction, the Legislature and Governor still must be diligent in addressing California’s persistent funding gap, so that all students have access to the programs, services and opportunities they need to meet state standards and to graduate ready for college and career.” – CSBA President Chris Ungar

“Educators appreciate the governor’s ongoing commitment to public education funding, but our schools, students and colleges can’t afford to go back to the days of massive teacher layoffs, larger class sizes, and tuition hikes. California continues to rank 46th in the nation in per-pupil funding. This is why CTA is part of the broad coalition supporting the ballot measure that would extend the income tax on the wealthiest 2 percent to support funding for students and health care for low-income children. The governor and his finance team could not have been more emphatic today as they showed the future financial picture unless we pass the California Children’s Education and Health Care Protection Act in November.” – CTA President Eric Heins

“Despite a growing economy, the state’s revenues fell nearly $1 billion short of projections – underscoring the essential role fiscal responsibility plays in drafting a sustainable spending plan. As a teacher during the recession, I experienced firsthand the devastation poor financial foresight had on our classrooms. Avoiding the boom-and-bust of past budget cycles demands we maintain a healthy rainy day reserve even as we seek to improve essential services.” – Patrick O’Donnell, D-Long Beach, chair of Assembly Education Committee

“With revenues now projected to be $2 billion lower than the January Budget forecast, the May Revise provides a sobering reminder that revenues can drop just as quickly as they grow.  Still, we are in very good financial shape and if we budget responsibly, build our state “rainy day reserve” fund, and focus on reducing the over $200 billion in budgetary debt and unfunded liabilities we will be able to handle any economic downturn that comes our way.” – Senator Bob Huff, R-San Dimas

“The Education Trust–West thanks Gov. Brown for the continued investment in the Local Control Funding Formula. The additional resources will be a big help to school leaders in the ongoing work to close opportunity and achievement gaps for low-income students and students of color. However, we remain concerned about the uneven implementation of new K-12 content standards, and the likely widening of opportunity gaps as a result. Recent state budgets have provided discretionary, one-time funds that could be used for any purpose, and the May Revision continues that approach. We ask the Legislature to dedicate funding in the budget for the implementation of new standards so all students will have a fair opportunity for success. We also urge Governor Brown to reconsider and approve dedicated funding for this purpose.” – The Education Trust-West

“California’s future prosperity is dependent on quality early learning programs that give kids a strong start intellectually, socially and emotionally. Increasing funding will help child care and preschool providers keep their doors open, meet new minimum wage laws and prepare for the future, so that children and working families have access to these essential programs. Investments must be made now to move toward a stronger, high-quality early childhood system.” – Ted Lempert, president, Children Now