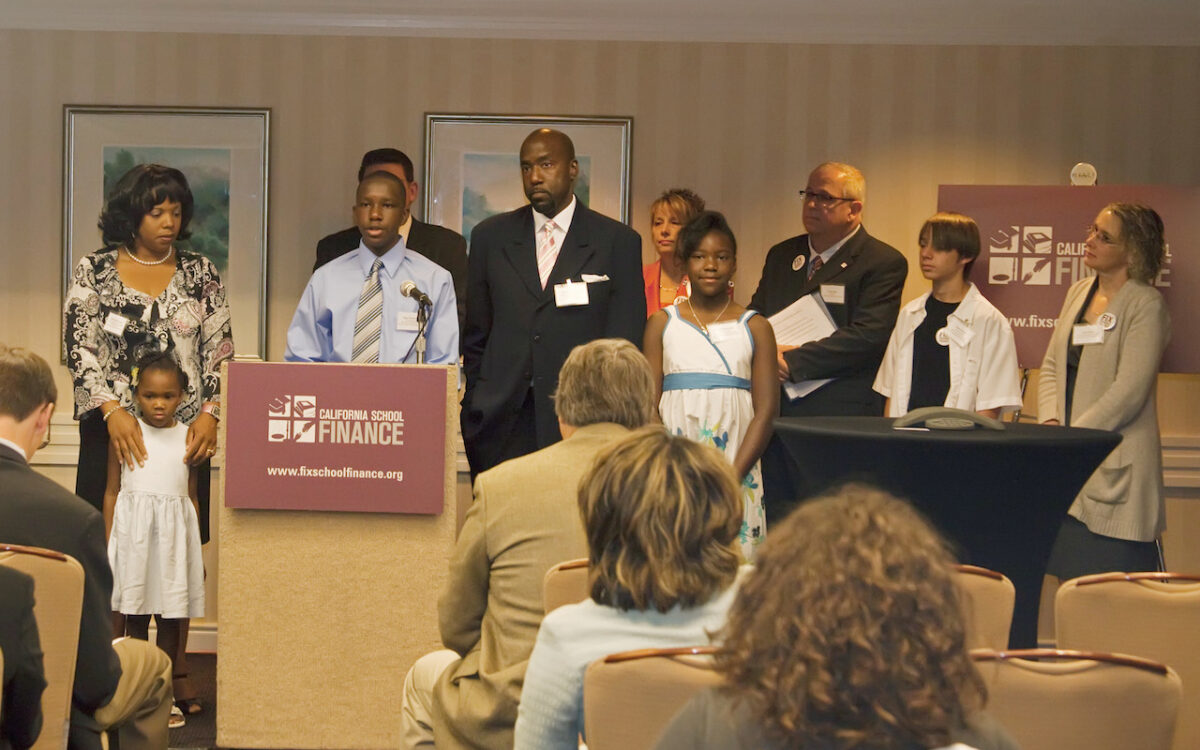 This month, a state court of appeal will hear arguments in two long-delayed lawsuits, filed during the economic recession six years ago, charging that the state violated children’s constitutional rights by underfunding education.

The companion lawsuits, which the courts have since combined into one case, argued that the state’s “insufficient, irrational and unstable” school funding system failed to meet the constitutional requirement to “encourage by all suitable means the promotion of intellectual, scientific, moral and agricultural improvement.” Translated into 21st century terms, the Legislature has imposed graduation requirements, academic standards, programs and school requirements, but hasn’t provided school districts with enough money to effectively provide them to all children, the lawsuits argue.

The plaintiffs had hoped to present evidence in a trial, but in July 2011, Alameda County Superior Court Judge Steven Brick cut that short when he rejected the cases’ core constitutional claims. While acknowledging that children in California have a fundamental right to an education, Brick ruled that the state Constitution doesn’t require the Legislature to fund it at any particular level, “however devastating the effects of such underfunding have been on the quality of public school education.”

The plaintiffs appealed Brick’s decision to the San Francisco-based 1st District Court of Appeal, which after accepting new briefs in January 2013, sat on the case for 3 years. The court’s announcement that it will hold brief oral arguments on Jan. 27 is an indication, according to lawyers, that a three-judge panel is ready to rule and likely has drafted a decision. The court will then have 60 days to issue it.

The court of appeal is considering only the arguments in the briefs presented to Brick in 2010, and a lot has happened in California since then. The state has adopted and begun to implement new science standards and the Common Core standards in math and English language arts. And it has bounced back from the recession, which saw massive K-12 budget cuts, and, through the Local Control Funding Formula, has begun to redistribute substantial money to those districts with high proportions of low-income children and English learners.

But, says John Affeldt, managing attorney for Public Advocates, which filed on behalf of plaintiffs in the Campaign for Quality Education lawsuit, the “underlying argument remains the same.” When the Local Control Funding Formula is fully funded, projected to happen in 2020-21, many districts will reach only pre-recession funding levels of 2007-08. California remains at or near the bottom of the 50 states in per-student staffing levels for teachers, counselors and administrators, he said.

The California Constitution guarantees an absolute right to be an educated citizen, and the best definition of what that means is the academic standards that the Legislature adopts, he said. “And there is not enough funding to deliver a quality standards-based education for everyone.”

Whoever wins the next round will likely appeal to the California Supreme Court, which would rule on the case in 2017 at the earliest. If the plaintiffs win an appeal, the case would then go back to the district court for a full trial on the merits of the case.

Maya Robles-Wong (see profile in this story) was a 16-year-old junior at Alameda High School who became the lead plaintiff in one of the lawsuits in 2010. Last summer, she graduated from Wellesley College, a top-flight private college in Massachusetts.