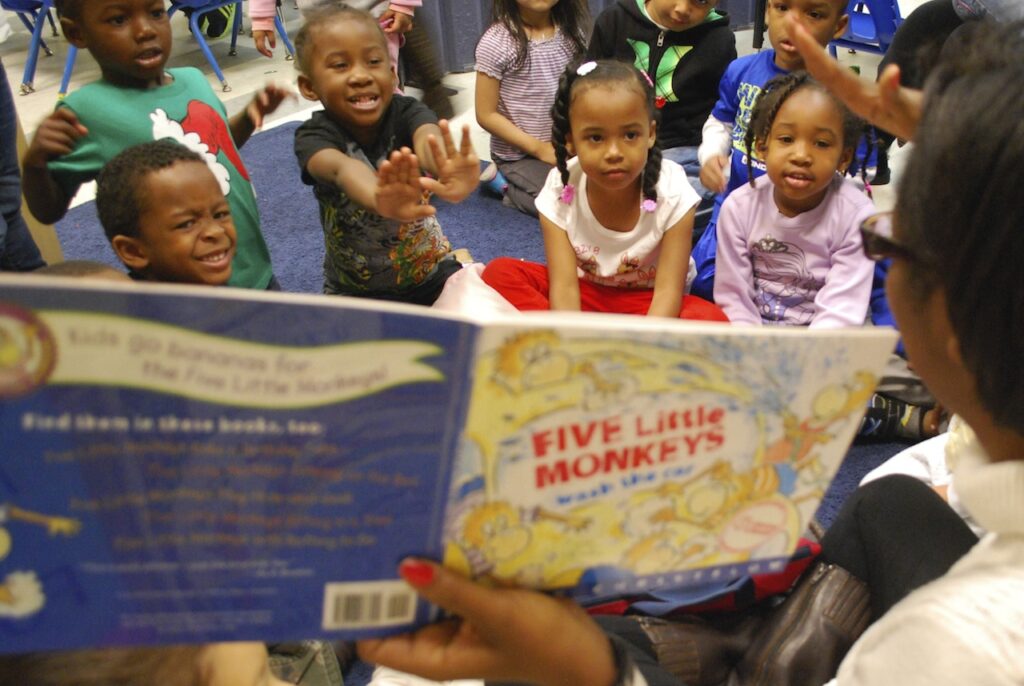 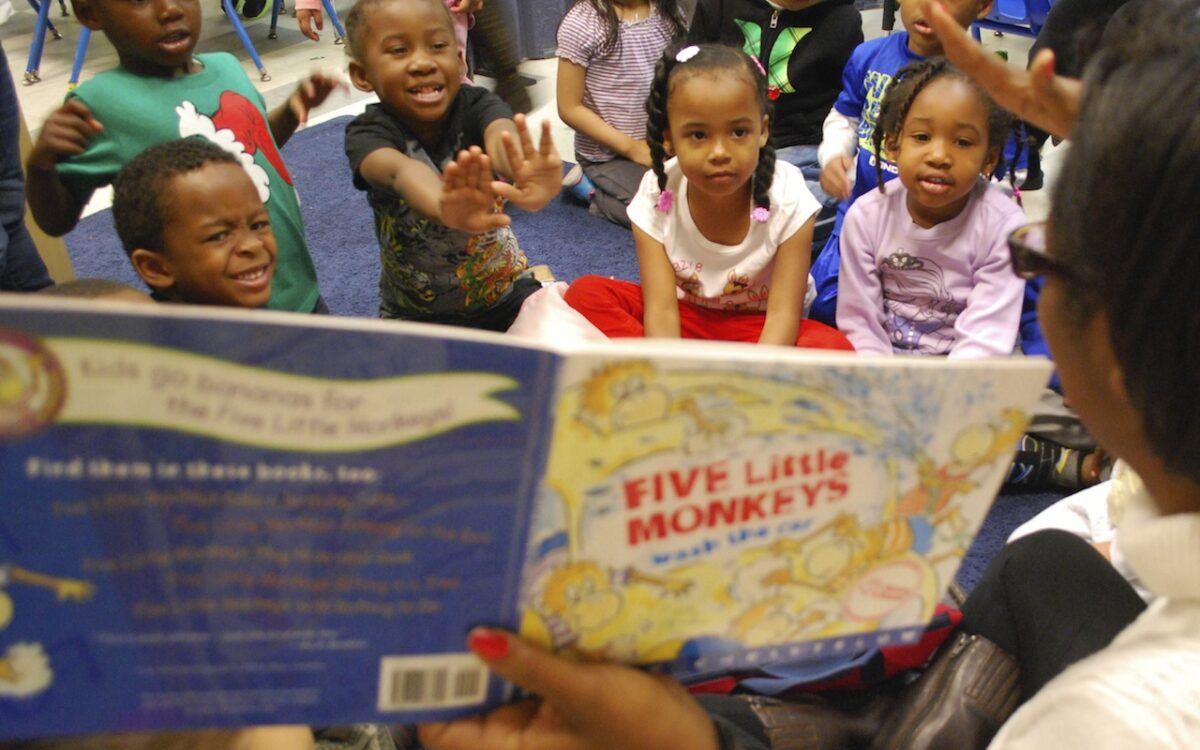 Credit: Lillian Mongeau/EdSource
Children listen to a book read out loud at a preschool in San Francisco.

Credit: Lillian Mongeau/EdSource
Children listen to a book read out loud at a preschool in San Francisco.

California should fundamentally refashion the way it attends to its youngest residents by offering access to high-quality childcare and education for all children aged 5 and younger within five years, and by instituting a range of child- and parent-friendly reforms in the workplace, a commission of business and policy leaders, academics and former elected officials said in a report released Wednesday.

“This is a clarion call to action,” Right Start Commission member and former state Senate leader Darrell Steinberg said about the report, which recommended the state consolidate its 18 early childcare and education programs, which it said are governed by 11 separate agencies.

The report envisions the state fully supporting children’s health through expanded childcare, preschool and transitional kindergarten, and better medical care achieved through increased Medi-Cal reimbursements and fixing an Affordable Care Act loophole that leaves 73,000 children without affordable health care, though it doesn’t say how that fix would be done. It characterizes its recommendations in transformative terms.

“No other human-development intervention can match this return on investment,” the report says.

The commission recommended a sliding-scale payment system that would provide free childcare and preschool services to those with under 50 percent of the state’s median income, and payments of no more than 10 percent of household income for people earning above that threshold.

Common Sense Media CEO Jim Steyer said the commission would “not be afraid” to press elected officials during the current and future budget cycles, or to “call for new revenue and taxes” to pay for the proposals. The commission also plans a series of at least 12 forums this year to raise awareness about its recommendations and to make the case for additional investment.

“We are not naive,” said Steyer. “There is significant additional investment that needs to be made here to the tune of billions of dollars a year if we are going to provide every child in California with the right start.” Consolidating programs would lead to major cost savings, he also said.

Called “Rebuilding the California Dream,” the report recommends creating a “one-stop shop” online portal, supported by regional referral centers, for parents to navigate childcare and education options – and the commission said it would work with Silicon Valley to make that happen. It cites North Carolina as a state that has had success coordinating resources for families and overseeing a statewide early education system.

The report also emphasizes the need for additional and significant support from the broader business community, in the form of advocacy and family-friendly workplace policies. Those policies should include flexible scheduling, including telecommuting arrangements, paid family leave and childcare assistance, said the report, which also urged business leaders, in undefined terms, to use their influence to rally support for investments in early education.

The business community leadership has in the past decade come far in its understanding of the importance of early childhood education, but there is legwork yet to do, said Matt Regan, senior vice president of government relations at the Bay Area Council, a business group that has in the past supported means-tested preschool.

“It’s incumbent upon organizations like ours to educate our members on the long-term benefits of making appropriate investments in early childhood,” Regan said. “You have to explain to them that it’s not a problem you can solve in middle school and beyond; it starts before kindergarten. But we’re definitely making progress.”

Calls for childcare and preschool available to all children will meet with some skepticism, he said.

“While we know that it’s the best bang for the buck to invest in early education, you will see raised eyebrows when talking to business leaders,” Regan said. “But it’s up to us to educate them (business leaders) and show them the data and research.”

Although the report doesn’t include a projection of costs, a “rough estimate” is that the expansion of childcare and preschool programs that the report called for in California would cost the state an additional $5 billion or more, said Craig Cheslog, co-director of Common Sense Kids Action. He said additional costs could be closer to $13 billion a year if quality-improvement measures were adopted such as recruiting and retaining qualified teachers, and increasing reimbursements to preschool and childcare providers, along with health-related measures such as higher Medi-Cal reimbursements.  The state now spends about $3.5 billion a year on childcare and early education programs, according to the Legislative Analyst’s Office.

“That’s a significant price tag,” state Department of Finance spokesman H.D. Palmer said, referring to Cheslog’s estimate of the costs to the state of the various proposals made in the report. He said it would be evaluated along with the other feedback to the state about Gov. Jerry Brown’s proposal to consolidate preschool, quality control and transitional kindergarten into a single block grant.

The report describes the state’s current childcare and education landscape as underfunded, “fragmented,” and confusing for families and providers alike. It also leans heavily on research that shows how crucial children’s experiences in their early years are to future academic, social and economic outcomes for both individuals and society. And it recommends a full-fledged campaign to educate families about the value of early childhood care and education.

The recommendations drew a mixed response from one prominent business group, the California Business Roundtable, a lobbying group that represents larger employers.

Clark also questioned the fiscal wisdom of expanding state spending in the preschool system too broadly. “Families with the ability to make those investments in childcare and the pre-K system, they’re doing that today,” he said. Creating a universal preschool and childcare system would place an additional burden on taxpayers, he said.

The commission has “a pretty good chance of getting the legislature to advocate on their behalf, but would it be enough to get them where they they want to get to in five years, is another question,” said Paul Warren, a research associate at the Public Policy Institute of California and a former chief consultant to the state Assembly’s education committee.

Common Sense Kids Action plans to raise $2 million to $3 million this year and $10 million to $15 million over the next five years to launch a campaign to promote the commission’s recommendations, Cheslog said.

“The only way this can even possibly be successful is if you put together a really powerful media campaign,” said Thomas Timar, executive director of the Center for Applied Policy in Education at UC Davis.