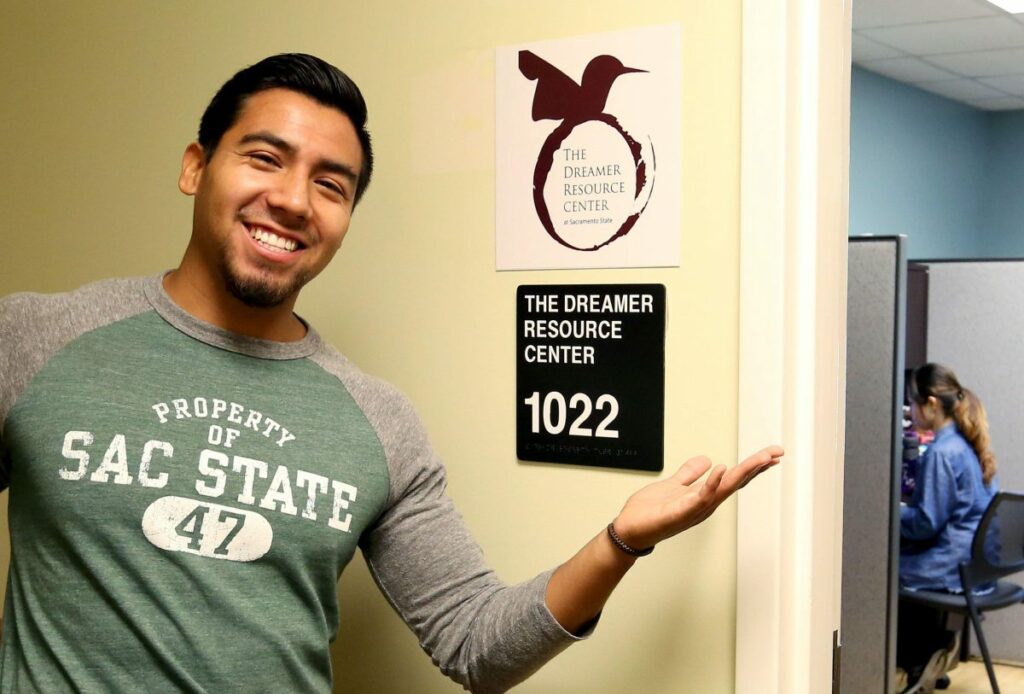 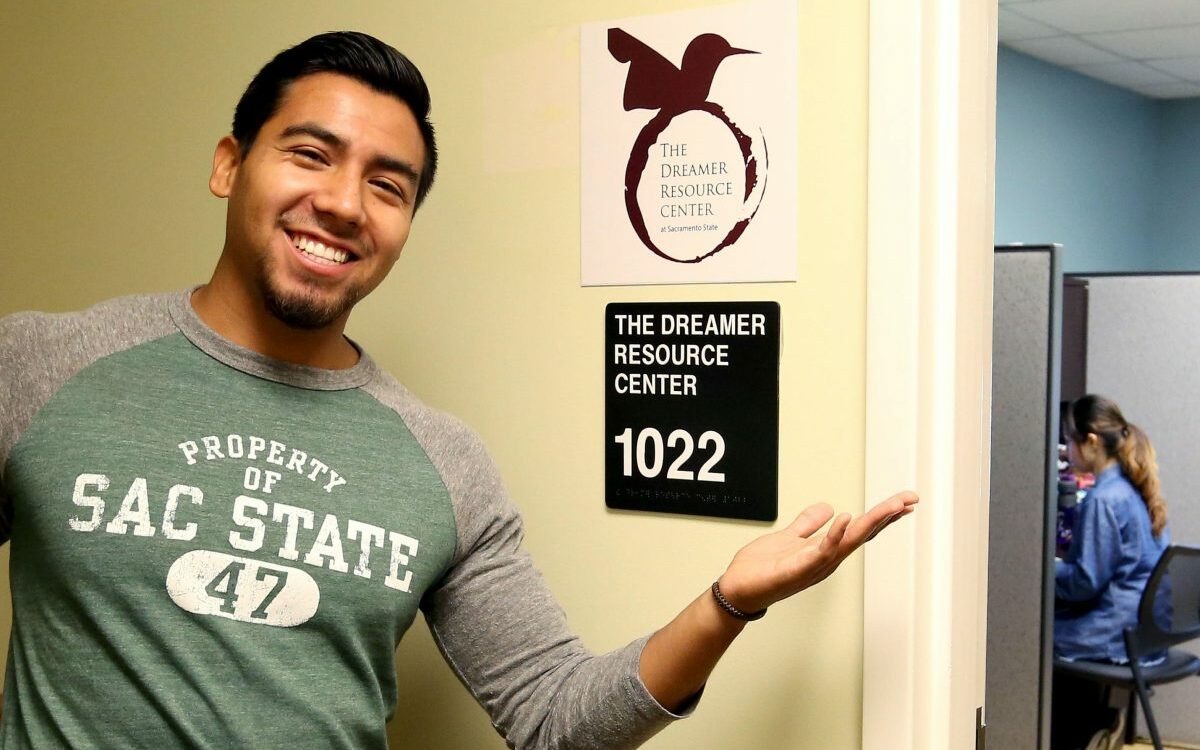 For Gustavo Garcia-Rojas, the recent theft of his backpack and wallet was more than an inconvenience — it was a threat to his life in the United States. Among the items taken was his federal identity and work authorization card, which is supposed to protect him from deportation.

Lucky for him, Garcia-Rojas, who was brought to the United States at age 7 from Mexico without immigration documents, had somewhere to turn.

As a student at Sacramento State University, he had access to the campus’ year-old Dreamer Resource Center for advice on how to get a replacement card under the DACA (Deferred Action for Childhood Arrivals) program. That federal measure allows some undocumented young people like him — who are widely known as Dreamers — to live and work openly in the United States without fear of sanctions.

For that kind of help, along with assistance with financial aid and other issues, these centers at California colleges and universities are becoming “second homes” for thousands of undocumented students, according to Garcia-Rojas, 22, who is studying psychology and counseling.

The centers help students “succeed in the future in school and in life” he said. Garcia-Rojas worked for a while at the Sacramento State Dreamer office, an on-the-books job that contrasts with the under-the-table jobs that many undocumented students were restricted to before 2012 changes in federal policy.

Many of the “Dreamer” centers at California colleges and universities opened in the past two years in response to the rising enrollments of undocumented students. But not enough schools have the services, according to backers of a bill recently passed by the state Legislature and now under review by Gov. Jerry Brown. The legislation, Assembly Bill 2009, would require all Cal State campuses and community colleges to establish such centers or liaison positions by 2017-18 and would provide state funding.

The goal is to “increase enrollment, transfer, and graduation rates among this population,” according to the bill. Its author, Assemblywoman Patty Lopez, D-San Fernando, said in a statement that the costs will be an “exceptionally worthwhile investment in the future of our young people.”

Accurate statistics on undocumented students in California are hard to find. About 74,000 students at UC, Cal State and community colleges last year received a waiver allowing them to pay a discounted in-state tuition rather than the higher rate for non-residents; most of the recipients are thought to be undocumented immigrants, mainly from Latin America and Asia, who graduated from California high schools.

The new centers usually provide academic and financial aid, psychological and legal counseling and referrals to free or low-cost services off-campus. Just as important, students say, they are places to discuss their fears about relatives facing possible deportation and uncertainties about their own futures. Being undocumented no longer has to be isolating on campuses, organizers say.

At Santa Rosa Junior College in Northern California, a Dream Center opened last year. Among other services, it hosts visits from volunteer immigration lawyers and offers referrals to a low-cost therapist specializing in undocumented people, according to Rafael Vazquez, an outreach coordinator for campus programs who helped establish the center.

He said some students still cope with the “sadness, frustration and surprise” of learning as teens of their previously secret immigration status. At campus gatherings, he said, undocumented students discuss such common experiences as “why Mom grabs the steering wheel so hard when driving” — fearing a traffic stop could lead to deportation.

The centers represent the next step on a controversial path of expanding college access to California students who lack legal immigration status. The California Dream Act made them eligible to receive state financial aid, including Cal Grants, starting in 2013. However, those students remain ineligible for federal grants and loans.

At UC Berkeley’s 4-year-old Undocumented Student Program, director Meng L. So said financial aid is important but not enough. “We need support services to support these student in the way they deserve,” he said.

Thanks to a substantial donation from Bay Area philanthropist Elise Haas, the UC Berkeley Dreamer’s Resource Center offers a full-time mental health therapist and legal aid assistance, free for the estimated 500 or so undocumented students there. That population has more than tripled since 2012, So said.

Many undocumented students feel “chronic stress, chronic fear” that their relatives and partners could face deportation, according to the center’s psychologist, Diana Peña. The worries are exacerbated by anti-immigrant rhetoric from Donald Trump’s presidential campaign, she said.

Plus, students feel pressure to be models of success, Peña said. Such perfectionism takes an emotional toll: “There is the pressure to come to Berkeley as a first-generation student and do well in a very competitive academic setting,” she said. “And they also have to prove to everybody that (Dreamers) are good and uphold that narrative.”

Dreamer center coordinators said they have not encountered direct anti-immigration criticism. Off-campus, however, Ira Mehlman, a spokesman for the Federation for American Immigration Reform, (FAIR) a Washington, D.C-based organization that seeks to restrict immigration, lambasted the centers for what he described as wrongfully “devoting resources to people who are in the country illegally.”

“This is consistent with California’s policies in general, which is to encourage and reward illegal immigration,” he said. Mehlman acknowledged that undocumented students brought to the U.S. as small children are in “a difficult situation” but he noted that many citizens face various troubles as a result of parents’ bad decisions.

In contrast, UC Berkeley senior Juan Prieto, 24, an English major, said he is grateful for the Dream centers and financial aid. Brought from Mexico at age 8, he then grew up in El Centro, close to the border. He has DACA status, but some of his siblings do not, and his mother remains undocumented. He said it’s constantly on his mind that his mother could get stopped by immigration authorities while driving.

On top of family worries are academic burdens, Prieto said. So having access to the undocumented student program and counseling “grounds you in ways you didn’t even know you needed to be grounded.”