Civic preparation cannot be measured by a multiple-choice test 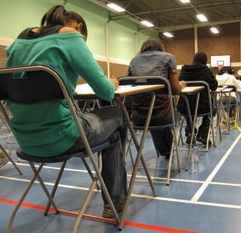 There is an adage in education that what you test guides what you teach.  Those who care about democracy may soon have reason to celebrate, as the California Legislature is currently weighing a recommendation from the California Department of Education to implement a test to measure students’ knowledge of civics. The thinking goes that if we test for civics then we are more likely to have schools pay attention to how prepared students are for democracy. There is, however, a corollary truth in education, which is that how you test guides how you teach. This is where the current recommendation before the Legislature is troubling.

The proposal to test high school students in civics is part of the State Superintendent of Public Instruction Tom Torlakson’s broader effort to revise the assessment system for the state of California (full proposal can be found here). With respect to civics, the recommendation includes implementing an online assessment that “uses selected response items that can be rapidly scored” – in essence, a multiple-choice test. While the purpose of such a test would be to gather data on the extent to which civics is covered in high school classrooms, it may unintentionally push civics instruction in the direction of rote memorization. If we truly want to prepare students for democracy, we need deeper, more meaningful assessments designed by teachers at the local level that require students to engage directly in the democratic process.

The Legislature need not look far into history for lessons on how multiple-choice testing has narrowed the curriculum – pushing out arts, physical education and civics, for example – and encouraged teachers to focus on more rote forms of instruction. We have just emerged from such an era defined by No Child Left Behind (NCLB), and it would be misguided, to say the least, to continue in this direction.

Success in the 21st century is increasingly defined by students’ ability to handle complex and creative tasks in an information-saturated environment. As the Partnership for 21st Century Learning points out, students need opportunities to develop critical thinking, creativity, collaboration and communication. These skills should also be of central concern to those who care about nurturing people who can ensure that the United States lives up to its democratic ideals.

The California Department of Education released some of its previous U.S. History exam questions, such as the following: “The Declaration of Independence elaborates on the Enlightenment idea of A) natural rights, B) collective ownership, C) religious freedom, or D) political equality.” While students should study the political thought underpinning the Declaration of Independence, using a multiple-choice test to assess their learning incentivizes students and teachers to focus on memorizing tidbits of information. Instead, assessments should expect students to apply their knowledge and should yield artifacts that can be used by educators to improve their instruction.

These kinds of assessments already exist and are being used in many schools and districts throughout California, including in Oakland Unified School District. Such assessments could serve as a model for whatever the state eventually implements.

In 2001, history teachers in Oakland developed learning standards based on the ways that historians think. Oakland Unified History Specialist Jeannie Kohl describes these standards as “de-emphasizing the memorization of facts and dates, and instead prioritizing higher-order skills such as chronological thinking, examining and interpreting evidence, and incorporating multiple perspectives.” Because multiple-choice questions are a poor measure of higher-order thinking, Oakland followed the Advanced Placement Exam approach, which requires students to examine multiple historical sources and use them as evidence in an argumentative essay responding to a prompt.  Tenth and 11th grade history teachers in Oakland voted to adopt the rigorous Advanced Placement form of assessment in 2004, and since then, it has expanded to grades 6-12.

One of last year’s 12th grade assessments asked, “Should the State of California adopt a minimum wage of $12.25/hour?” These are the kinds of engaging questions that when asked could provide students with opportunities for civic engagement. Students at Fremont High School conducted interviews of people who had lived on minimum wage and used the transcripts of these interviews as evidence for their essay. At Coliseum College Preparatory Academy, students surveyed more than 500 community members to understand the impact of Oakland’s raise in minimum wage on their livelihoods. Rather than learning multiple-choice test-taking strategies, students need more opportunities to engage with the community around these types of relevant and meaningful questions.

The Legislature has a critical choice to make. Assessments shape the kind of instruction that happens in classrooms. A history teacher in Oakland told us, “If we want students to be successful on the [test], then we have to be intentional with the instructional choices that we make throughout the school year. Students need multiple opportunities to practice the kind of thinking and writing that the assessment demands.” By choosing a meaningful assessment of critical thinking, history teachers in Oakland are moving away from lectures that work well with multiple-choice tests and toward instruction that favors students discussing primary texts, researching in the community, and developing their own arguments.

As lawmakers decide how California schools will assess civics, they should answer this one question: “To prepare youth for democracy, do our students need A) more opportunities to actively and critically analyze issues or B) more time memorizing names and dates?” This is one multiple-choice question that we hope our lawmakers answer correctly.

Young Whan Choi is Civic Engagement Coordinator for the Oakland Unified School District and a member of the California Performance Assessment Collaborative. Elizabeth Humphries is a history educator and is the High School History Specialist for the district.