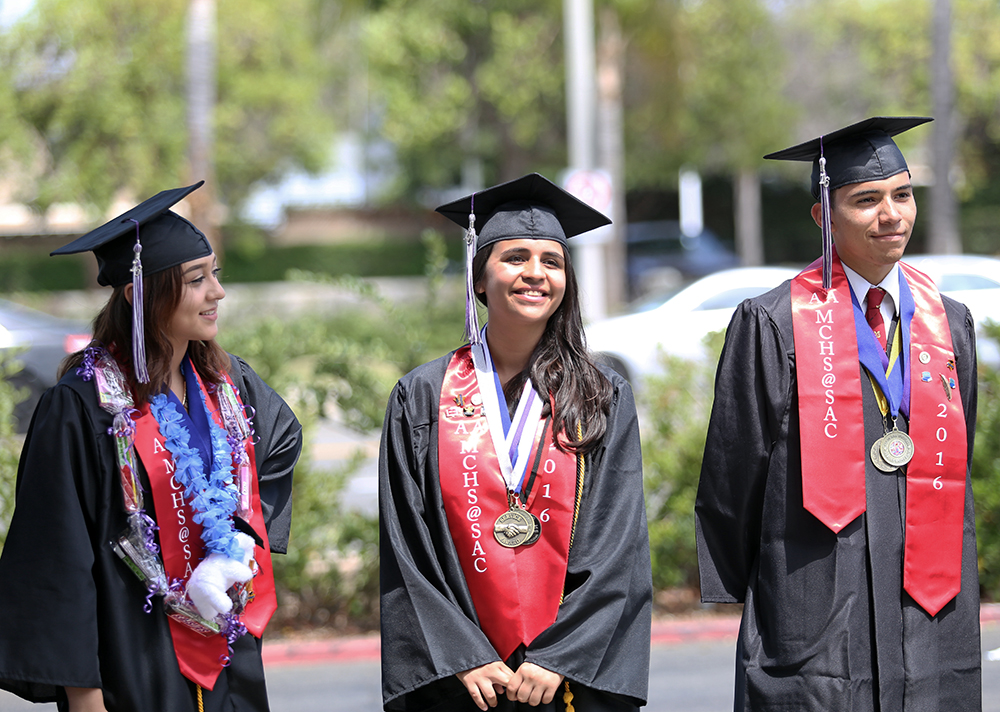 California lags slightly behind the national average in high school graduation rates, but has increased more substantially over the last five years than the national average, according to figures for 50 states released Monday by the U.S. Department of Education.

President Barack Obama touted improving graduation figures at a speech at a Washington D.C. high school Monday morning as part of an effort by his administration to showcase the progress officials say has occurred during Obama’s eight years in office.

The figures show that between 2010-11 and 2014-15, the average graduation rate nationwide, based on graduation rates reported by all 50 states and the District of Columbia, increased to 83.2 percent, compared to 82 percent in California.

The national figures also show that the graduation rate for African-American students, while still substantially below the national average, increased by 7.6 percentage points. That represented a greater increase than all student sub-groups other than English learners, who recorded an 8.1 percentage point increase.

This is the first time all states have used the same four-year adjusted measure of high school completion –showing what proportion of students who began in the 9th grade graduate four years later. But comparisons with other states are difficult to make, as states, districts and even schools in some cases have different graduation requirements.

That is the case in California, where the state has set base standards for high school graduation, but districts then set their own standards in addition to what the state requires. They also don’t indicate what courses students have taken to meet graduation requirements.

Russell Rumberger, director of the California Dropout Research Project at UC Santa Barbara, expressed some caution about what the graduation rates actually show.

“Graduation rates are a blunt instrument that doesn’t account for learning and the extent of college and career readiness that students have achieved,” said Rumberger, widely recognized as California’s preeminent researcher on dropout and graduation rates. “Research suggests, for example, that students need to reach a 2.6 GPA to be college ready, yet many graduates have not reached that level of preparedness.”

He noted that half of the improvement in graduation rates in California was made in the first two years. “That suggests it was easier to raise graduation rates for students not too far from the ‘finish line,’ perhaps only a course or two behind, but then it gets harder to move more students to the finish line,” he said.

On a phone call Monday, U.S. Secretary of Education John King Jr. acknowledged the variation in state standards for graduation, but also noted that just having a high school diploma drastically increases the economic and life prospects for students in their later lives.

In President Obama’s speech Monday to students at Benjamin Banneker Academic High School in Washington D.C. —  almost exactly five years after he gave a speech about education  — he emphasized  that graduating from high school was just a first step. By 2020, two out of three jobs will require some additional postsecondary study or training.  “That doesn’t always mean a four-year college degree, but it does mean — whether it’s a four-year university, or a community college, or some sort of training program — you’ve got to get a little bit more than just what you’re getting in high school,” he said.